Hampo the Hammer nails another top point for Alty! 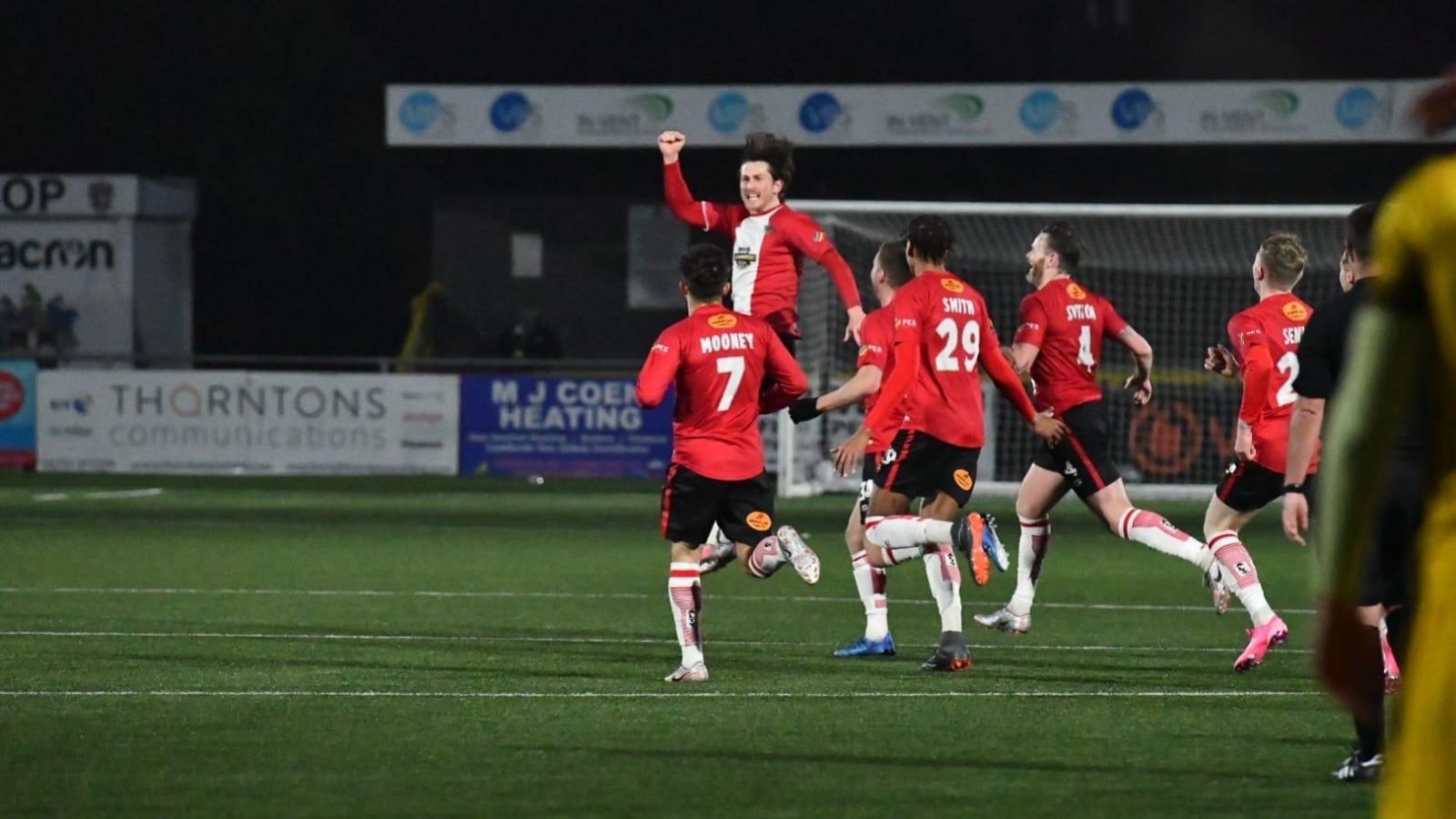 The comeback kings did it again as Connor Hampson conjured up the most dramatic of equalisers in the fourth and final minute of stoppage time to secure a richly-deserved point for Altrincham against Sutton United at Gander Green Lane.

The deficit may only have been a single goal this time, rather than the two that needed clawing back at Stockport County a week earlier, but that should take nothing away from the magnitude of Alty's achievement in once more dictating matters after the break and making a side rated among the Vanarama National League promotion favourites look second-best.

That's how good Phil Parkinson's team were in the second half, just as they were at Edgeley Park, and once more fortune favoured the brave as they fought their way back to 2-2 and added another thoroughly-merited point to their growing haul.

Whereas Alty still had time to go in search of a winner against Stockport - a quest that almost bore fruit when Tom Peers went agonisingly close - parity was achieved a trifle later on this occasion.

Precisely seven seconds of the allotted extra four minutes remained when a Joel Senior ball towards the Sutton area deflected off a defender and spun across the pitch to Hampson, fully 30 yards out.

One touch was all the left-back needed to steady himself before unleashing a left-foot drive that flew into the top left corner, with keeper Dean Bouzanis rooted to the spot in stark contrast to Hampson's elated, animated team-mates as the goal celebrations took off.

With the final whistle sounding the instant play restarted, it could not have been left any later, yet no-one could question Alty's right to a share of the points after contributing so significantly against a side who occupy third place and have their sights on going even higher, given their games in hand on those above them.

It was rousing stuff from the Robins in a game switched to Sutton's artificial pitch due to Alty's being snowbound and frozen, yet they were nearly caught cold by a positive start from the home team.

There have been few more impressive keepers in the National League so far this season than Tony Thompson, and he did his burgeoning reputation no harm with a smart save in only the fourth minute.

Sutton had begun on the front foot and might have capped their early enterprise with a breakthrough but for Thompson's trademark ability to read danger signs and react swiftly.

Latching on to a ball that broke kindly into his path on the left of the area, Isaac Olaofe looked sure to score, until Thompson advanced to narrow the angle and parried the close-range shot for a corner.

Sutton had been camped in and around the Alty area for the first 10 minutes or so, but the Robins had stood firm and limited clear-cut chances to that solitary threat from Olaofe.

Not only did they weather the early storm, they began to make inroads into Sutton territory and test the home defence, as confidence in the Alty ranks grew visibly.

Matty Kosylo had already shown a lovely touch near the right touchline in the opening couple of minutes, brilliantly skipping past two challenges, and he was at it again when Alty fashioned their first scoring opportunity in the 12th minute.

Once again demonstrating how adept he is at sidestepping close-markers, the attacking midfielder opened up space for a fierce right-foot drive that Bouzanis beat away, diving to his right.

Kosylo was again heavily involved as Alty shocked their high-riding hosts by going in front in the 16th minute. When his corner was only half-cleared, Alty's pre-season signing hooked it straight back into the danger area, where Toby Mullarkey was alert to the possibilities, as he darted in to head past Bouzanis.

There were complaints from Sutton players about a collision between Ritchie Sutton and Omar Bugiel, but after a brief consultation with his linesman, the referee confirmed the goal should stand.

If the home side felt hard done to, they soon set about putting matters right, as they stunned Alty with two goals in six minutes.

The dangerous Will Randall, a constant threat on the left flank, cut inside in the 33rd minute and curled a deep cross that eluded Hampson at the far post but was met by a header from David Ajiboye that was steered just inside the opposite post.

When Randall surged past Senior on the outside and whipped in a low cross that was put behind for a corner, it led to Sutton's second goal in the 39th minute.

Alty failed to deal with Randall's flag-kick, and when the ball broke loose, Olaofe lashed it home from a couple of yards out, much to the annoyance of Thompson, who felt he had been impeded and was booked for making his point too forcibly.

So, once again, Alty found themselves emerging from a half-time team talk against opponents who were not only harbouring promotion ambitions but had an advantage in terms of the venue and scoreline.

Once again, it left them distinctly unperturbed. As at Edgeley Park, they stepped up a gear, took the game to their lofty hosts with a level of control that spoke volumes for the cohesion and belief in their ranks and duly gained their reward,

The signs were there as early as the 46th minute, when Alistair Smith, again a model of assurance in the centre of midfield, seized on to a Josh Hancock pass and hit a shot that looked goalbound until deflecting off a defender.

The on-loan midfielder was similarly foiled 10 minutes later when a crisply-hit volley was diverted away from the target by a defender's outstretched leg, just as it looked like drawing Alty level.

As Alty kept up the pressure, so the chances continued to be carved out, the next one falling to Ryan Colclough, who was clean through with just the keeper to beat after fastening on to a long through ball, only for Bouzanis to save his team with a superb block.

When Jake Moult played a one-two with Smith in the 85th minute only to be denied by another Bouzanis block, time seemed to be running out and the odds looked stacked against Alty getting anything for their second-half dominance.

This team like nothing better than defying the odds, though, and it should have surprised no-one that they did it again.

A looping header by Colclough from substitute Dan Mooney's deep cross landed agonisingly on the roof of the net in the 87th minute, and the winger went close again in added time with a close-range shot that was blocked and scrambled away.

Still Alty kept pouring forward, still they kept believing, and, wouldn't you know it, that refusal to buckle and admit defeat paid off in spectacular fashion with literally seconds left.

Lining up his sights, as Senior's pass ricocheted off a defender into his path, Hampson let fly with the cleanest of contacts to finally haul Alty level and ensure justice was done.

No-one will be getting carried away in the Alty camp, but one thing is for sure - this was further evidence that the spirit and belief instilled by Parkinson and Neil Sorvel since taking over with the club on its knees can only bode well for Altrincham continuing to prosper.