Hanks at the double as Alty win it with classic strike 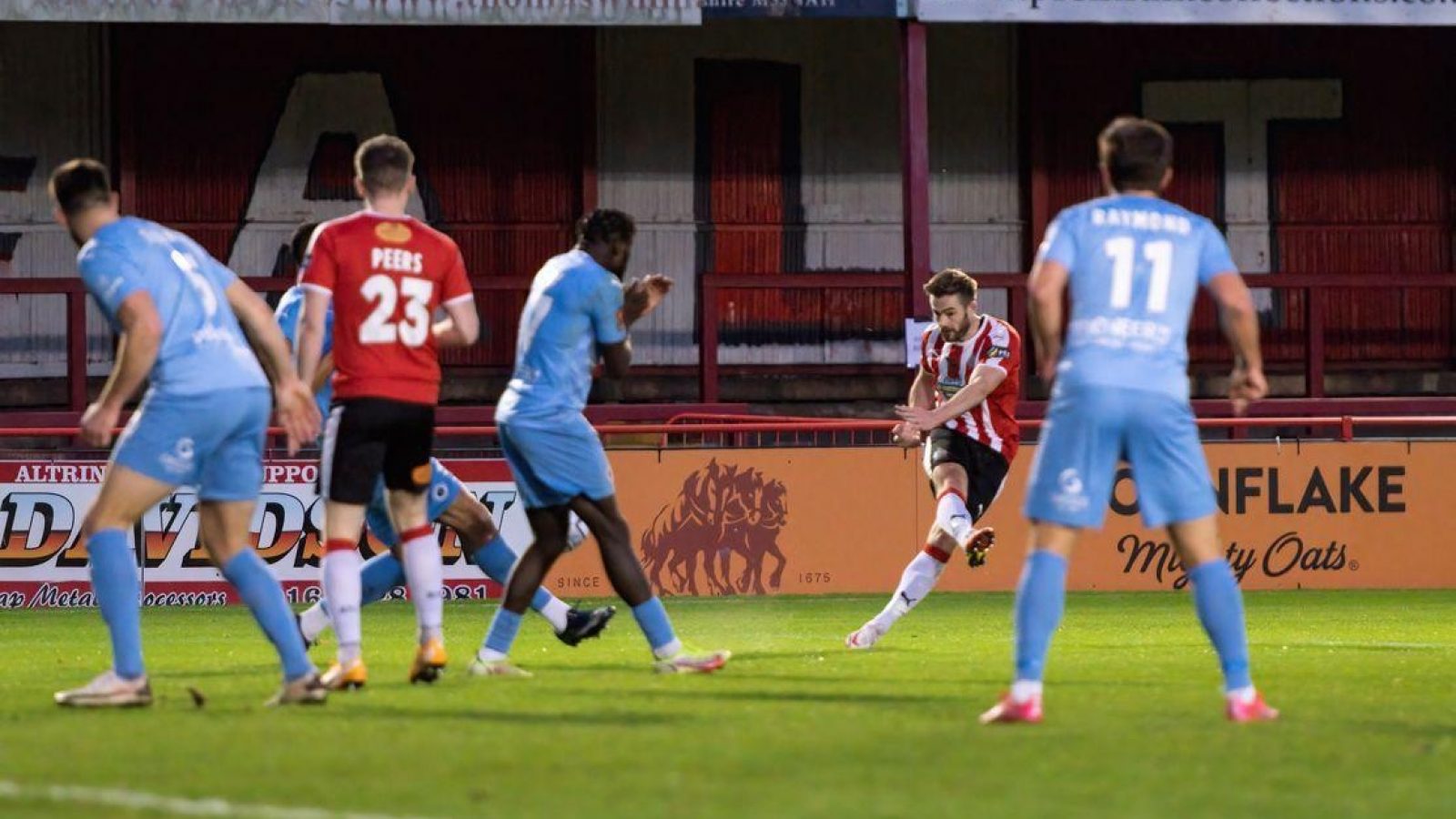 *It's there ... Josh Hancock steers a shot past the keeper to round off a slick Alty move and secure their first home win of the season. Picture by Michael Ripley.

Altrincham banked their first three points at home this season in dramatic style with a late Josh Hancock winner that was hailed as a classic of its kind by assistant-manager Neil Sorvel.

In an enthralling, see-saw encounter, the Robins fought back from early arrears to lead 2-1 midway through the second half, but the initiative looked to have slipped away when Chesterfield replied with a stunning equaliser barely 30 seconds later.

Hancock had other ideas, though, bursting into the box and finishing off a slick, incisive right-flank move that the normally understated Sorvel had no hesitation describing as 'a classic Altrincham goal' in his post-match interview.

Some may feel Chesterfield were a shade unlucky to finish empty-handed after contributing significantly to an entertaining, evenly-fought game that could easily have gone either way.

Others might argue, with some justification, that Alty's propensity for keeping going and giving their all right to the last whistle - to the bitter end, as manager Phil Parkinson likes to phrase it - brought its due reward.

Certainly, no-one can question the attitude or character of this Alty side after the way they dealt with a strength-sapping sequence of seven games on the road, then responded to the body blow of successive home defeats by Solihull Moors and Aldershot Town.

Any mental scars from those two home setbacks could easily have resurfaced, as Chesterfield snatched an early lead, just as Solihull and Aldershot had done.

Giant frontrunner Tom Denton had already tested Tony Thompson with a trademark header and looked to be setting up another possible aerial opportunity when he appeared to be shepherding the ball out for a corner on the left of the area in the 13th minute.

Instead, he chose to keep it in and lay it back to the edge of the area, and when the resulting cross was delivered to the far post, it was headed back across goal by Jonathan Smith for Scott Boden to apply the simplest of finishes from point-blank range.

It was the worst possible start for Alty. The pre-match instructions would surely have been to keep it tight in the opening exchanges. Instead, they were trailing at home for the third time in less than a week, with the first half still in its infancy.

If alarm bells were ringing, they were soon silenced, as Alty drew level in the 29th minute. A swift break on the right enabled Matty Kosylo to look up near the edge of the area and see Fisayo Adarabioyo in support to his left.

A perfectly weighted pass gave the Alty striker the time and space to control it and steady himself before rifling an unerring shot past the advancing keeper with admirable composure and accuracy.

Thompson's form has been a revelation, a case of carrying on where he left off last season, and he did brilliantly to deny Chesterfield in the 33rd minute, tipping over a drive that was hit with power and swerve and which, as an extra complication, flew through a ruck of defenders.

As an indication of how the play ebbed and flowed, Alty missed out on a second goal because of a marginal offside flag in the 35th minute but were indebted to a goalline clearance by Billy Sass-Davies in the 36th.

It was that sort of game, and the theme continued on the stroke of half-time, when Sass-Davies rose higher than anyone to meet a corner with a firm header that flashed narrowly wide.

There were more goalline heroics in the 51st minute, when Hancock somehow prevented Smith's shot from going in with the aid of the crossbar in what was an incredible escape for Alty, and there was more drama 11 minutes later when Alistair Smith darted into the Chesterfield area and tumbled over a defender's outstretched leg to earn a penalty.

Alty's fortunes from the spot have been mixed, to say the least, in recent times - with the notable exception of Elliott Durrell's brief but eventful stay - but there was never any question of Hancock's kick ending up anywhere other than the back of the net.

It was struck with pace and pinpoint accuracy, and though Corey Addai guessed correctly and dived the right way, his outstretched right hand was still nowhere near the ball, as it arrowed inside the left post.

The lead didn't last long. Scarcely 30 seconds, in fact, and it was little consolation that the impressive Jordan Cropper's shot could not have been struck more cleanly or with greater precision.

Who had the edge now? Had the tide turned against Alty or could they muster one last effort from somewhere? The ever-lively Kosylo suggested they could with a shot that tested Addai, but, equally, the aerial threat of Denton was a factor that couldn't be ignored and that would have tilted it Chesterfield's way but for a wonder save by Thompson in the 69th minute.

A right-wing cross programmed  for the Denton forehead duly found its target, and the contact that followed, from little more than six yards, looked as if it would wrong-foot the Alty keeper. Thompson was moving to his right, following the line of the cross, whereas the header was deliberately planted to his left, yet he changed direction and twisted brilliantly to stick out a hand and palm it to safety.

It was a match-saving intervention, and it was soon followed by a match-winning moment at the other end, as Shaun Densmore, making the absolute most of his return to the starting line-up, played the ball in towards the area on the right, where Kosylo stepped over it, performing a clever dummy that threw the Chesterfield defence, and Hancock took his cue to stride forward and steer a shot across the keeper and into the far corner.

What a finish to a captivating game, and when the whistle sounded soon after to confirm Alty's first home win this season, the roar of delight from the home bench could be heard loud and clear as it reverberated round the ground.