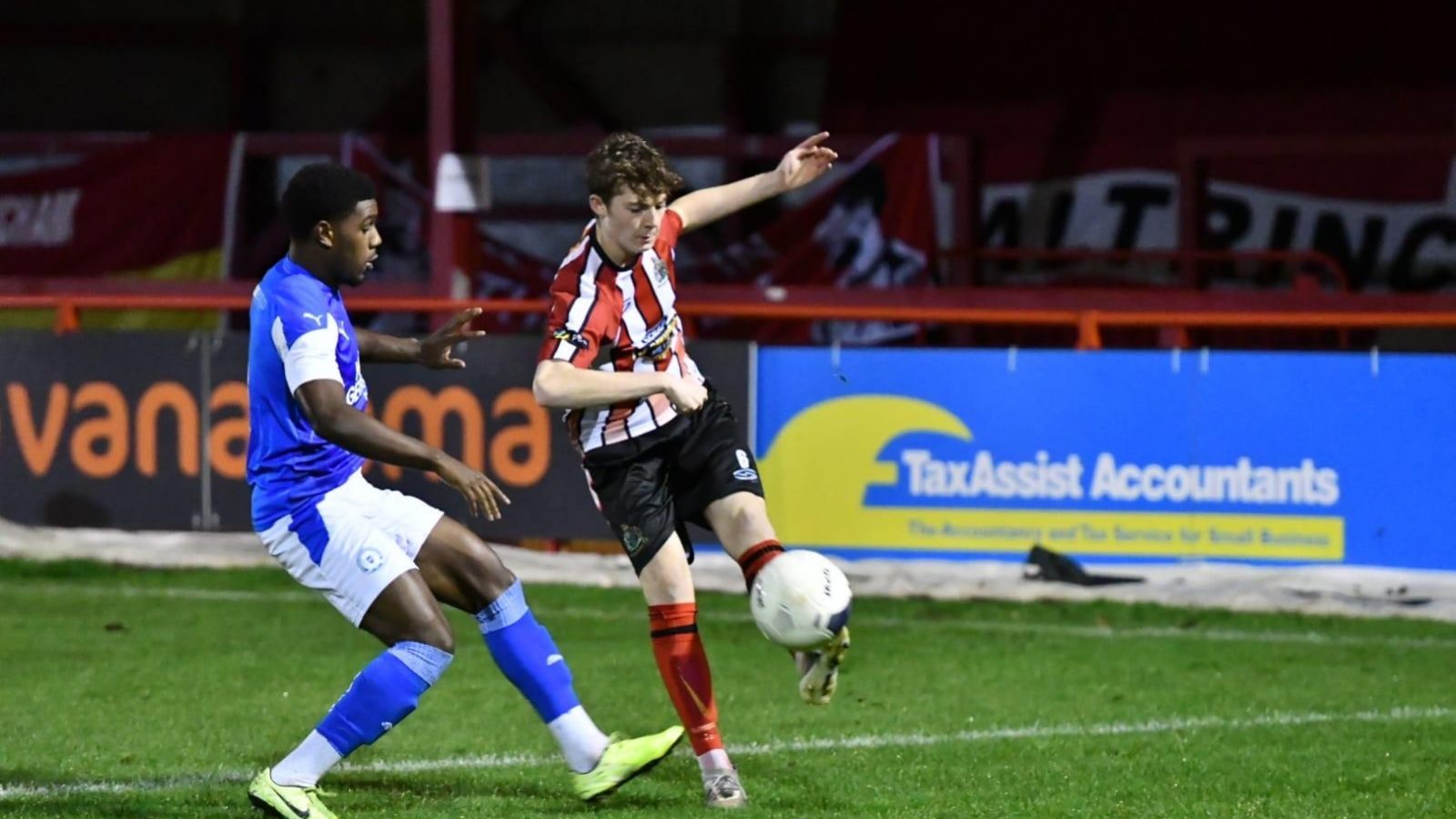 Altrincham U18's were knocked out of the FA Youth Cup on Friday evening, falling to a 2-1 defeat at home to Peterborough United in a second round tie that saw the young Robins walk away with plenty to be proud of.

The early pace of the game was very much dictated by the visitors but it was a game of possession as opposed to territory. While Peterborough enjoyed a lot of the ball, Alty restricted them to limited chances and it was a penalty just before the half hour mark that put Posh ahead - Theo Donachie clipped Adler Nasciemento inside the box and the captain, Charlie O'Connell, made no mistake in front of an empty Catax Golf Road End on 27'.

Heads didn't drop though and Altrincham were back on level terms just four minutes later.

Right back Josh Finlay won possession back for the Robins and set Luigi Mongan away down the right hand side. His cut back to Lewis Waller was a timely one, finding the central midfielder in plenty of space on the edge of the box. It was space that he used to his advantage, drawing a defender in before teeing up lewis Billingsley to smash the ball across the Peterborough keeper and into the bottom right corner on 31'. A fantastic move, and Alty's best contribution of the first half for sure.

A flurry of late Peterborough chances had Alty longing for the half-time whistle and it arrived right on cue.

Half-time: Altrincham U18 1-1 Peterborough United U18

The second half started in much the same manner as the first, with the visitors controlling proceedings without creating anything substantial. Paul Fay's side kept a compact and well organised shape that had Peterborough controlled, whilst giving Alty the opportunity to counter when the chance was there to do so.

The Peterborough corner tally steadily increased throughout the half and, unfortunately, it was a sign of things to come. In contrast to previous deliveries which had been placed onto the keeper or around the six-yard area, a deep lofted ball to the back post caught Alty by surprise and O'Connell was there to head home for his second of the evening on 77'.

Two changes were made with the introduction of Graham and Morrison for Finlay and Goulden, and with that Altrincham really began to find a way back into the game. Previously comfortable, the visitors now found themselves wildly swinging to clear goalmouth scrambles and backing off the Robins as they continued to push forward.

To the delight of Radio Robins and Alty TV commentators, the young Robins had the ball in the net with the last kick of the game. The substitutes combined, as Graham played a gorgeous outside-of-the-foot pass over the top to Morrison who finished, albeit from an offside position. The flag was up late, in one final, sickening blow to Alty's chances of progressing to the Third Round of the FA Youth Cup for the first time in the club's history.

Full-time: Altrincham U18 1-2 Peterborough United U18

"I think that's one of the best Altrincham youth performances that I've seen, and I've seen many over the years" said Brian Flynn as he rounded off on tonight's Alty TV LIVE stream. It wasn't to be tonight but the lads can certainly hold their heads up high, more than matching a full-time youth academy side that featured 3 players who have made senior appearances for Peterborough in the Papa John's Trophy this season.