ALTY host York City at The J.Davidson Stadium on Saturday afternoon (3pm) with the Robins looking to pick up their fifth victory in six National League North games.

Phil Parkinson's side are riding a wave of momentum at the minute, with the latest victory coming thanks to Jordan Hulme's brace in the 2-1 victory at Chester last weekend.

In terms of team news, Max Harrop will definitely be missing for the visit of the Minstermen after picking up his fifth booking of the season against Chester. James Jones is also nursing a hamstring problem and so is being monitored ahead of the game, while James Poole and Sean Williams are edging closer to full fitness but may miss out once again.

Opponents York City have had an inconsistent start to the season and find themselves in mid-table as we begin to move towards the halfway stage of the season.

They are managed by Sam Collins, with the former Port Vale defender taking charge in August, following the dismissal of Martin Gray, who had guided the Minstermen to an 11th place finish last season.

The club have a number of experienced players in their side that have found success at a higher level, with the most notable of these being big striker Jon Parkin. Parkin was the club's top scorer last campaign, with the 36-year-old hitting 25 goals last year in all competitions and his physical presence is something that defenders must always be prepared for.

They bolstered their squad on Monday by signing striker Joe Ironside and defender Kennedy Digie on loan from Kidderminster Harriers and both played on Tuesday night. Their arrivals follow two further loan signings from the previous week as Port Vale centre-back Joe Davis and Rotherham United winger Alex Bray were added to the squad.

The Minstermen were involved in a goalless draw at home to Chester on Tuesday night and have not won in the last four games so will be looking for a positive result The J.Davidson Stadium.

The two sides last met in a goalless draw in the National League back in 2011 as the Minstermen were fighting for promotion to the EFL, whilst they won the reverse fixture at Bootham Crescent 3-0 through goals from Michael Rankine (2) and Richard Brodie.

This match will be segregated and York City fans will have access to the new catering facilities in the away end where food and drink (including alcoholic beverages) will be available. Away fans should enter strictly via turnstiles 3 and 4.

Turnstiles will be open from 13:30 and there will be a new guest ale on tap in the Community Sports Hall. We do of course recommend sensible consumption of alcohol.

Through The Years by Howard Watts & Mike Garnett – 17th November

There will be live text coverage of the game on the Matchcentre, and there will be live updates on our twitter account as we look forward to providing all the latest from The J.Davidson Stadium.

Alty extended their unbeaten run to six league matches with a 3-0 win over York City to move into the play-off places of the Vanarama National League North.

After a relatively even first half with little between the two sides, Alty raised their game a notch or two after half-time to blow York away with a superb all-round display to run out comprehensive winners.

The visitors produced a first half performance belying their position in the table as they looked strong throughout the opening 45 minutes. They had clearly done their home work on Alty as their work rate and pressing from the front was excellent in the first half as Alty could not get into their stride.

Neither side was able to create much in the way of openings in the first half. Alty had plenty of the ball as usual but were restricted to probing around the final third without being able to unlock an organised York side that came with a game plan to frustrate. The front four were constantly double-teamed which led to something of a stalemate at both ends.

York gave a warning just before half-time as a header from a corner had to be cleared off the line by Connor Hampson but even that was a routine clearance as neither team did enough to merit going into the break with a lead.

Phil Parkinson’s men came out of the traps with greater tempo in the second half and Josh Hancock had the best chance of the game on 53 minutes. The ball fell to him in the box and his effort brought a stunning save out of Bartlett in the York goal to deny the Alty playmaker.

That was just a warning of what was to come however as four minutes later, Hancock would not be denied. Not that dissimilar to his previous chance, Hancock lashed a half volley into the net to give Bartlett no chance this time and give Alty a precious lead.

That goal saw the match open up as York had to throw caution to the wind. Langstaff, Harris and Parkin all came off the bench as they tried to change things around to give greater attacking threat.

In truth, it only upset their rhythm increasingly and it was Alty who benefitted from the greater time and space.

On 81 minutes, Jordan Hulme came within inches of following up his brace at Chester last week with a wonderful curling effort from the edge of the box but Bartlett pulled off another stunning fingertip save.

Alty were clearly in the ascendancy however and soon wrapped the game up. With seven minutes left, a corner was half cleared to the edge of the area to skipper Jake Moult who chested the ball down and hit a beautiful effort from just outside the box into the bottom corner.

That goal sent the vast majority of the 1673 in attendance into raptures and York heads noticeably dropped.

There was still time however for Josh Hancock to add his second and Alty’s third as he found himself clean through and showed great composure to stroke the ball past the York keeper once again and seal the win for the hosts.

That win edges Alty up a place into seventh and keeps the good run of form going. Next week, sees a break from league action as we welcome Bradford (Park Avenue) in the FA Trophy, and we look forward to seeing you there!

Full time: Altrincham 3-0 York City, what a win! Match report will follow shortly! Thanks for tuning and see you next week - same time, same place!
Attendance: 1673, thank you for your support.
Strange scenes as a York fan runs from the away end via the pitch to shout in the faces of the York City management staff and is escorted out of the ground.
90" HANCOCK! 3-0. He slots past Bartlett unchallenged.
87" Yellow card for Griffiths for a nasty challenge on Moult.
84" Newton shoots well over the bar from the edge of the box.
83" Corner for Altrincham. Johnston will take... MOULT SCORES FROM THE EDGE OF THE BOX WITH A SWEET STRIKE, 2-0 , 83 minutes gone.
81" Another magnificent save by Bartlett to deny a curling effort from Hulme.
74" A blatant handball by Digie in the box somehow isn't spotted by referee Andrew Kitchen.
73" Third and final sub for York. Hawkins is replaced by Parkin.
59" York sub: Bray is replaced by Harris.
Score update: Altrincham 1-0 York. Hancock 57"
59" York sub: Ironside is replaced by Langstaff.
59" Almost a second for Altrincham as Johnston breaks down the right and shoots at Bartlett and it's saved.
57" ALTRINCHAM GOAL! Hancock gives Alty the lead with a sweet half volley.
55" Johnston shoots from the edge of the box and his shot trickles wide.
53" What a save by Bartlett! Hancock shoots and an acrobatic save denies Altrincham from going ahead. Corner for Altrincham, Johnston takes from the right hand side, Hannigan goes flying in and misses it.
51" Altrincham have made a bright start to the second half, Johnston has been causing havoc for the York full-backs.
48" Johnston's cross is caught low by Bartlett.
45" York get us underway for the second half.
The second half is moments away.
Fairly even game so far here at Moss Lane. It is becoming clear to us here that York City shouldn't be as low as they are in the table. Johnston had a chance for Altrincham after 18 minutes and York could've also had a goal near the end of the first period if it wasn't for Hampson to clear off the line, fantastic game here so far.
Half-Time: Altrincham 0-0 York City.
45" Bray crosses and Jones blocks it, corner for York City. Hampson clears off the line!
44" Sean Newton lets one fly from 25 yards out and it almost goes out for a throw in for Altrincham.
43" Moult shoots into the arms of Adam Bartlett.
42" Law shoots straight at Thompson.
40" Hawkins shoots from over 30-yards out and almost gives York the lead.
39" Hulme cuts in from the left and shoots towards goal but his effort is blocked by the chest of Digie.
34 minutes in and we are still waiting for the deadlock to be broken.
30" Dale shoots from the edge of the box with his shot ending up wide of the mark.
24" Altrincham have a corner on the right hand side. Johnston will take, Moke clears.
21" Corner for York, Griffiths will take, Hulme clears.
18" Johnston loops the ball towards the goal and the York 'keeper flicks it onto the bar and behind for a corner. Johnston takes and it's cleared by Digie.
15" Another free kick for York, Newton takes it, Moke shoots from the edge of the box and it's scuffed behind for a goal kick to Alty.
14" Griffiths is fouled by Hancock just over the half way line. Law takes it but it is cleared by Moult.
11" Corner for York. Newton's shot is blocked and goes behind.. the corner is cleared away.
8" York are passing the ball around the back and controlling the tempo of the game.
4" Another corner for Altrincham. Johnston takes again... Dale wins a free kick.
2" Corner for Altrincham. Johnston to take... Hannigan heads it across goal but no one can poke it in.
0" Kick-off!
The teams are out on the pitch and we are just moments away from kick-off, Come on Alty!
Looking like a very impressive turnout so far with plenty of travelling fans in the away stand.
York City FC substitutes: 12) Langstaff, 14) Harris, 15) Ferguson, 16) Dyer, 17) Parkin.
York City FC starting line-up: 1) Bartlett, 2) Law, 3) Newton, 4) Digie, 5) Davis, 6) Griffiths, 7) Hawkins, 8) Moke, 9) Burrow (C), 10) Ironside, 11) Bray.
Altrincham substitutes: 12) Mantack, 14) Scott, 15) Langley, 16) Densmore, 20) Wynne.
Altrincham FC line-up: 1) Thompson, 2) White, 3) Hampson, 4) Jones, 5) Hannigan, 6) Moult (C), 7) Johnston, 8) Richman, 9) Hulme, 10) Hancock, 11) Dale.
Team news will be posted shortly.
You can follow the game here, via Altrincham's official twitter and also via www.radiorobins.com
If you have time before the game, have a read of the match preview: https://www.altrinchamfc.com/news/altrincham-v-york-city-match-preview
Current standings: Altrincham- 8th, 25 points. York City- 12th, 20 points.
Hello and welcome to Matchday Live! Today Altrincham host York City FC at the J.Davidson stadium, kick-off is at 3PM. 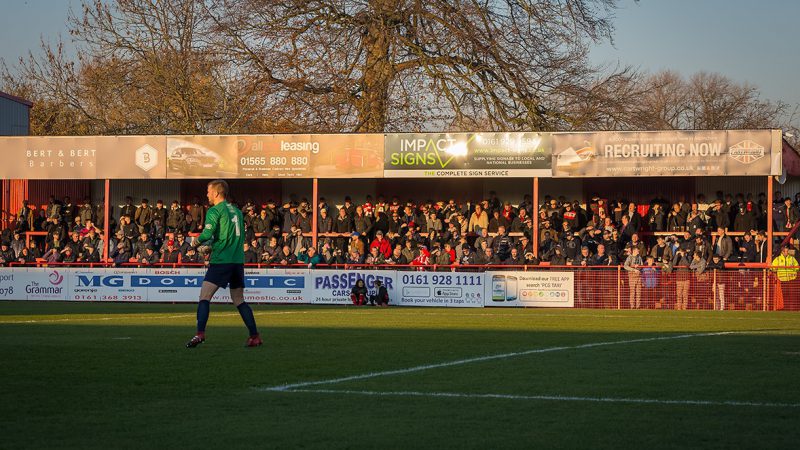 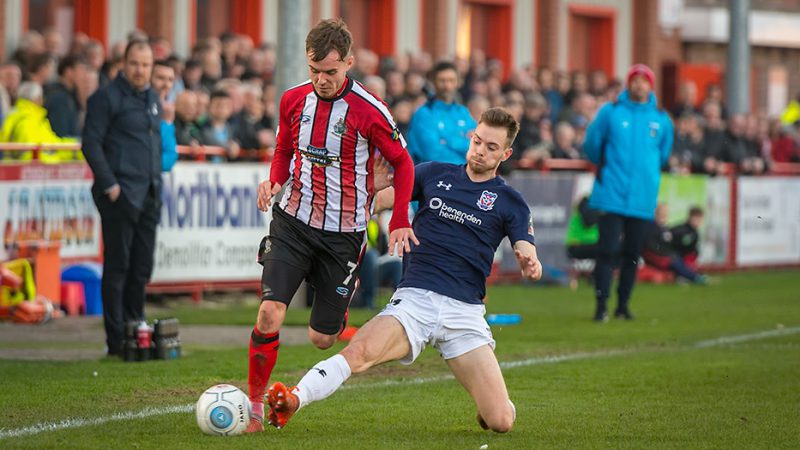 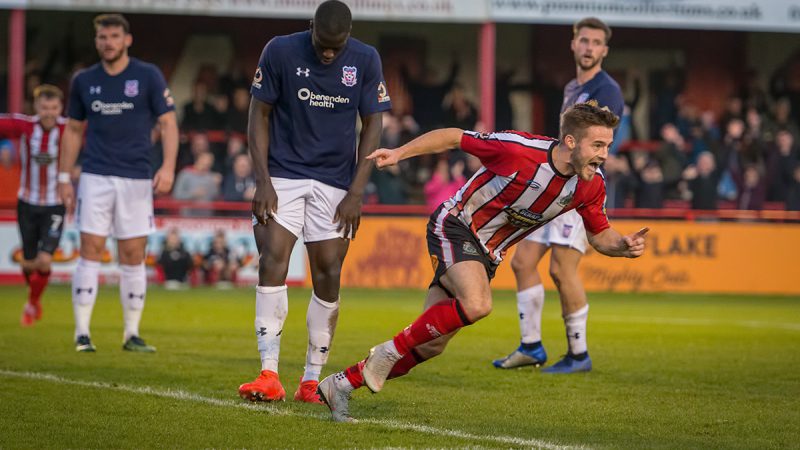 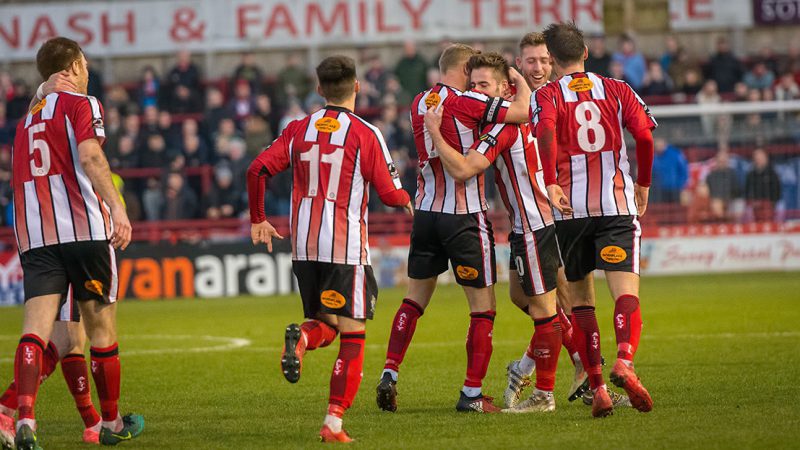 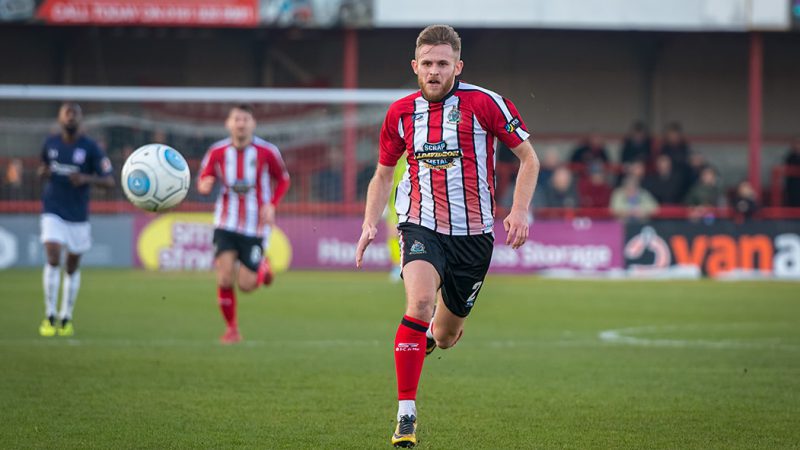 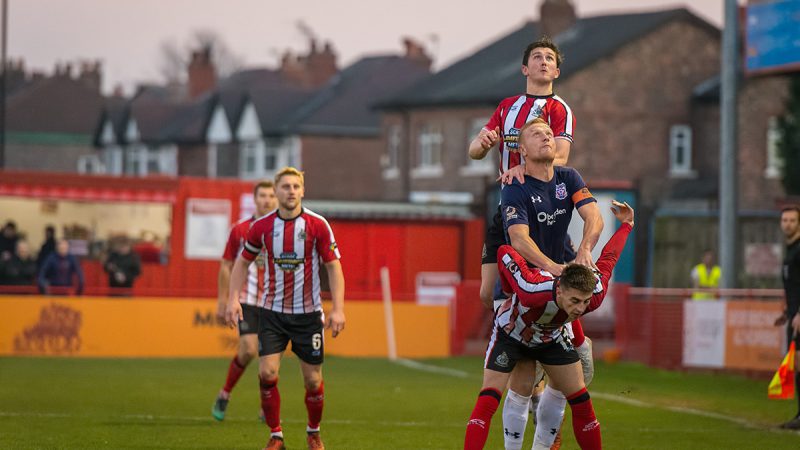 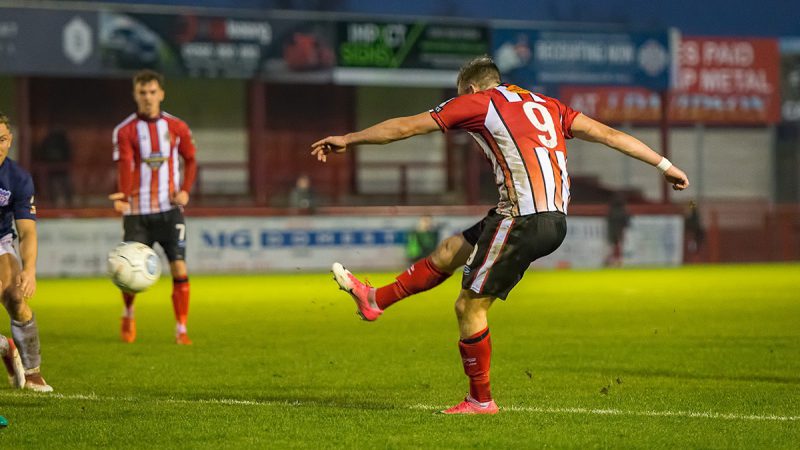 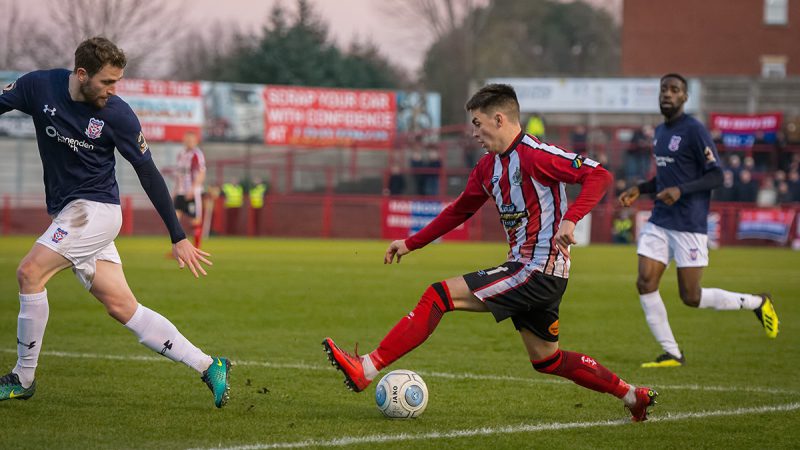 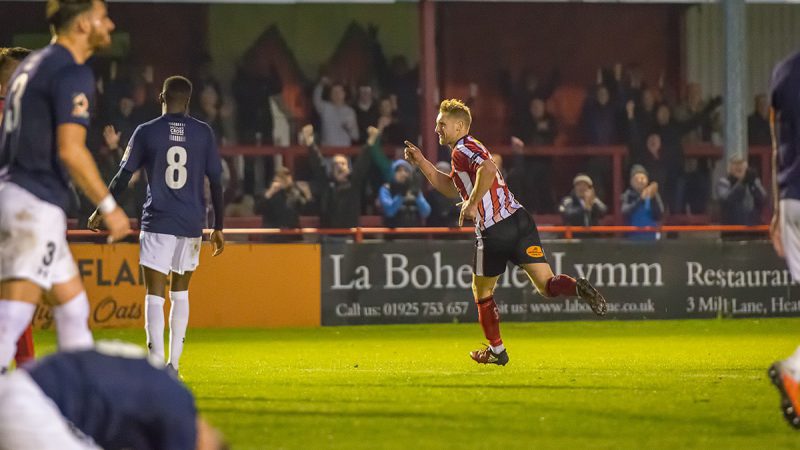 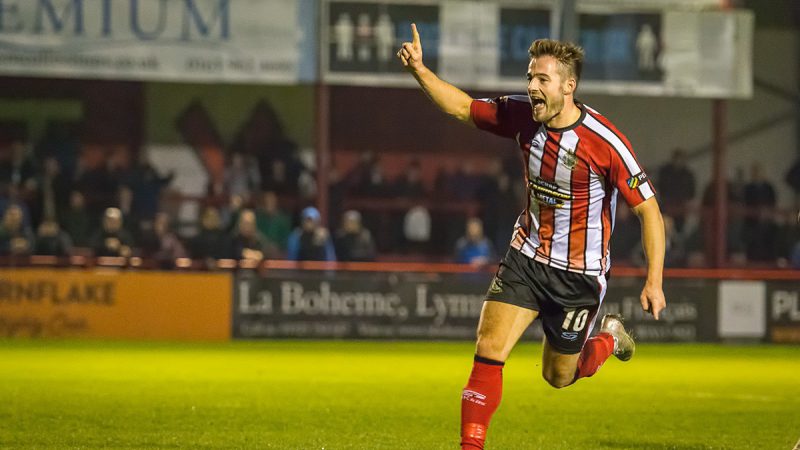 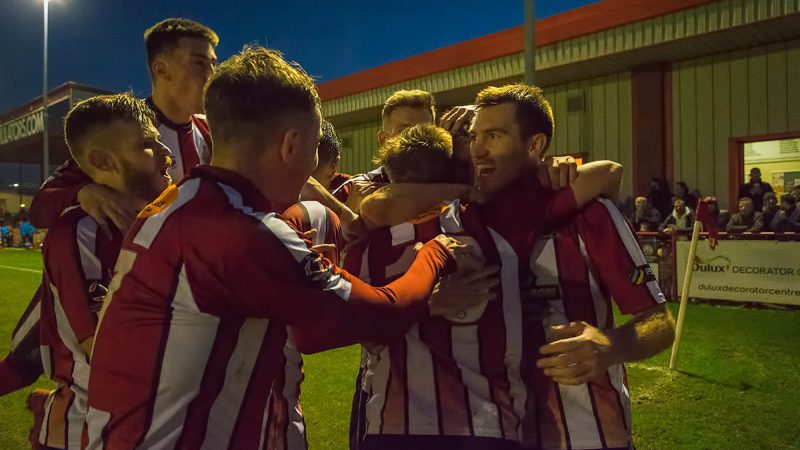 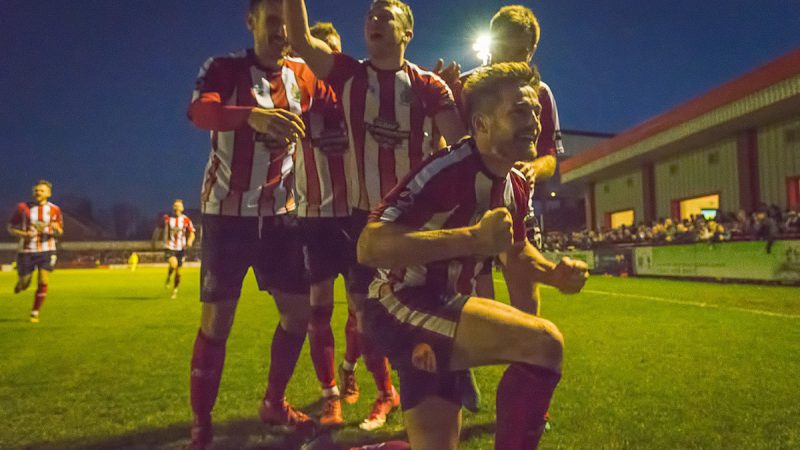 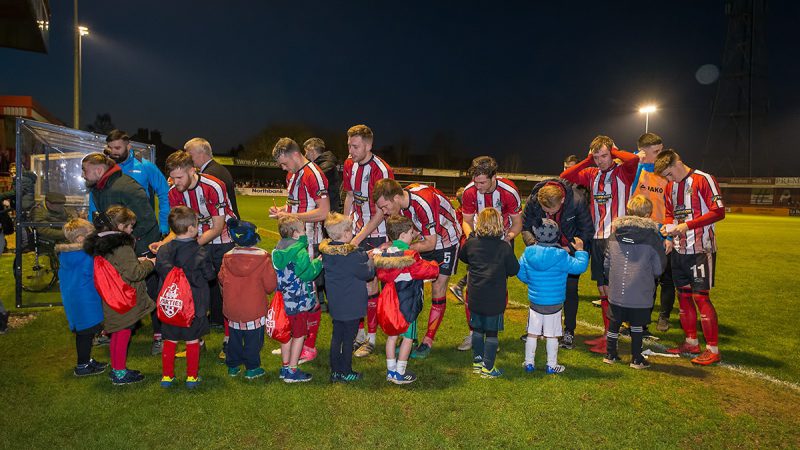