The Robins will be looking to secure a hat-trick of wins this weekend when they make the long journey south to face table-topping Dagenham & Redbridge at the Chigwell Construction Stadium.

After the late defeat to Wealdstone, Phil Parkinson’s side have bounced back in impressive fashion, beating Notts County 1-0 before putting four past King’s Lynn Town on Tuesday evening at The J. Davidson Stadium.

Alty took the lead in the 12th minute when Ryan Colclough curled a shot beyond experienced ‘keeper Paul Jones, after Matty Kosylo had won the ball back on the halfway line.

King’s Lynn pressed well, with Tony Thompson in top form to prevent the Norfolk-based side from hitting the back of the net.

Having seen a goalbound effort cleared off the line moments earlier, Jake Moult double the hosts’ advantage in the 52nd minute before Dan Mooney’s close-range strike looked to have put the game to bed.

The Linnets did threaten a comeback late in the game when Junior Morias thundered the ball into the top corner from range, but substitute Josh Hancock put an exclamation mark on a fine second-half performance, stabbing Joel Senior’s cross home from the edge of the six-yard box.

You can watch the highlights of that 4-1 win by pressing play below.

Following that result, the Robins moved up to eighth in the Vanarama National League, seven points behind leaders Dagenham & Redbridge, having played two fewer games than the Daggers.

This will be the first meeting between the sides since last season’s game on Saturday, 20th March at The J. Davidson Stadium. On that occasion, a late goal from visiting defender Will Wright extended the Robins’ winless run to four games.

The game seemed to be heading for a draw until Wright's fantastic free-kick, after a foul by Tom Hannigan, arched beyond the reach of Thompson with 10 minutes to play.

Alty had a chance late on to claim a point, when Senior’s cross found Toby Mullarkey inside the box, but the defender fired over.

You can watch the highlights of that 1-0 defeat by pressing play below.

Founded in 1992 after the merging of no fewer than five clubs, Dagenham & Redbridge are one of many in this division with a Football League background. Between 2007 and 2016, the Daggers played their football in Leagues One and Two, before suffering relegation back into non-League after the 2015/16 season.

They almost bounced back at the first time of asking, qualifying for the National League play-offs before losing 3-1 to Forest Green Rovers at the semi-final stage.

The following three seasons proved to be tougher for the club, finishing no higher than 11th and leaving their supporters wondering when they were going to see their team mount another promotion challenge.

After an inconsistent start to the 2020/21 campaign, Dagenham & Redbridge ended the season in fine form, only just missing out on a play-off place. With momentum firmly on their side, the Daggers have come out all guns blazing, sitting atop the Vanarama National League after six wins, one draw and one loss.

Keeping hold of talismanic striker Paul McCallum over the summer no doubt boosted their hopes for the coming year, and his form in front of goal, alongside strike partner Josh Walker, is a big reason behind their brilliant start.

In their last game against Solihull Moors, a dominant Daggers performance served up goals from Walker, Scott Wilson, Mauro Vilhete and, with a brace, McCallum.

Solihull took the lead when James Ball, a very early substitute for the injured Danny Newton, scored from Joe Sbarra's cross. However, the Daggers found an equaliser 10 minutes later as McCallum fired home from close range.

The home side were awarded a penalty three minutes later when Walker was pulled down in the box. Picking himself up, he converted the spot-kick, sending Ryan Boot the wrong way.

Wilson continued the scoring for Dagenham with 14 minutes left after being set up by Mo Sagaf, and four minutes after that, Vilhete headed home Myles Weston's cross.

McCallum's second of the game finished Solihull off in the 90th minute as Dagenham converted their second penalty to secure a 5-1 win.

Our hosts on Saturday are managed by Daryl McMahon, who took over the Daggers in January 2020, only 24 hours after resigning from his position at Macclesfield Town. The Irishman replaced Peter Taylor, who had departed the club in December 2019, following a poor run of form.

A former pro who came through the West Ham United Academy, the midfielder developed a wealth of experience across the Football League, featuring for the likes of Port Vale and Leyton Orient, before stepping into non-League with Stevenage Borough in 2007. He spent two years there before signing with Cambridge United.

Between 2009 and 2015, McMahon featured for seven non-League clubs, making a total of 223 appearances, scoring 31 goals, before hanging up his boots at Boreham Wood, a club where the Irishman endured his fourth play-off final defeat in only six years.

Originally a caretaker, McMahon got his first taste of management with Ebbsfleet United in 2014, spending four seasons with the Fleet and helping them to promotion from the NL South with a play-off victory over Chelmsford City.

After leaving by mutual consent, he was handed the reins at Macclesfield Town in August 2019, but with the club in deep financial trouble, he resigned shortly after.

After ending the 2020/21 season strongly, McMahon not only kept the majority of his squad together, but added further quality to his team. Summer signings Sam Ling (ex-Leyton Orient) and Walker (ex-Barnet) hit the ground running, the latter combining with McCallum to form the most potent strike force in the league.

Having said that, they will no doubt be tested at the weekend against the National League’s joint-best defence, one which has conceded only seven goals so far this season.

A win for Altrincham at the weekend could move them above Bromley into seventh, level on points with Notts County in sixth, while a win for Dagenham & Redbridge would further cement their place at the top of the table.

*There's just no stopping him .. Dan Mooney is pictured here celebrating his goal against King's Lynn Town last Tuesday, and he was at it again on Saturday. Photo by Michael Ripley.

Dan Mooney’s strike deep into stoppage time completed a dramatic comeback as Altrincham dislodged Dagenham & Redbridge from the top of the Vanarama National League and made it three straight wins in the space of a week at the Chigwell Construction Stadium.

Marcus Dinanga’s deflected strike handed Alty the lead after 10 minutes before goals from Mauro Vilhete and Matt Robinson saw the Daggers ahead at the break.

The Robins improved greatly in the second half, as Mooney, Dinanga and Ryan Colclough all had efforts which tested home ‘keeper Elliot Justham.

A goal from Josh Hancock, with three minutes left, looked to have snatched a deserved point, as the substitute bent the ball beyond the reach of the shot-stopper.

But Mooney sent the Alty fans into raptures when he thundered the ball home from the edge of the area with only seconds left to round off a fantastic week for Phil Parkinson and his side.

In the pouring rain, it was Dagenham who started the better as Josh Walker headed Myles Weston’s dangerous cross wide within the first minute.

However, with their first real attack of the game, Altrincham edged their way in front when a great run down the wing from Joel Senior allowed the full-back to put the ball on a plate for Dinanga.

The Alty striker's effort deflected off Callum Reynolds into the bottom corner, and the Robins' opener was officially credited as an own goal.

Daryl McMahon’s men were pushing hard for a leveller and, in the 27th minute, only the heroics of Tony Thompson denied them a way back into the game. Stepping up to take a free-kick, home captain Will Wright looked certain to have picked out the top right corner, but the Alty number one got his fingertips to the effort, leaving the Dagenham support stunned.

With the weather worsening, the table toppers were able to take advantage. Ten minutes before the break, Vilhete had all the time and space he needed to turn the ball home from close range.

Things went from bad to worse for Alty as only six minutes later, they found themselves behind. Despite initially defending a deep cross into the box well, the ball fell kindly for Robinson, who made no mistake a yard or two out.

It seemed like the Daggers were the more likely to add to the score in the second half, with Toby Mullarkey needing to be at his best to clear Wright’s shot off the line, before Thompson smothered the rebound.

As the game reached the hour mark, the Alty supporters started to sense that the tide was turning and, after scuffing an effort wide moments earlier, Colclough was left wondering how he hadn’t scored when a thunderbolt from 25 yards struck the inside of the upright before bouncing to safety.

The rain was not letting up, but it was the Robins who looked more comfortable, as the men in yellow started to find space behind a tiring Dagenham defence. With 80 minutes played, an excellent flick from Colclough released Senior into plenty of space down the wing.

On the receiving end of a delightful ball, Hancock spotted Mooney in a good position, but winger’s shot arced just the wrong side of the foot of the post.

With time running out, it looked as though Alty might be heading back north empty-handed, but Hancock had other ideas. On the receiving end of another terrific ball from Senior in the 87th minute, the substitute took one touch before bending his effort beyond the fingertips of Justham and into the back of the net.

And with what was the last kick of the game, Mooney got the goal his performance had deserved, hammering the ball home among a sea of Dagenham legs, after A-Jay Leitch-Smith had done well to keep possession of the ball. 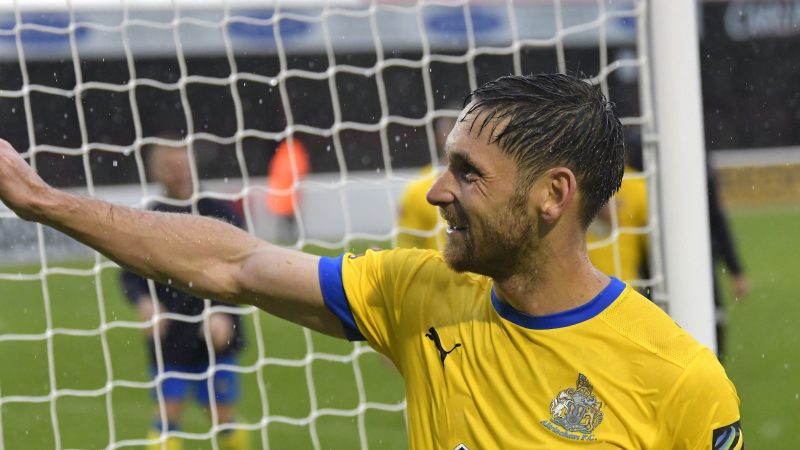 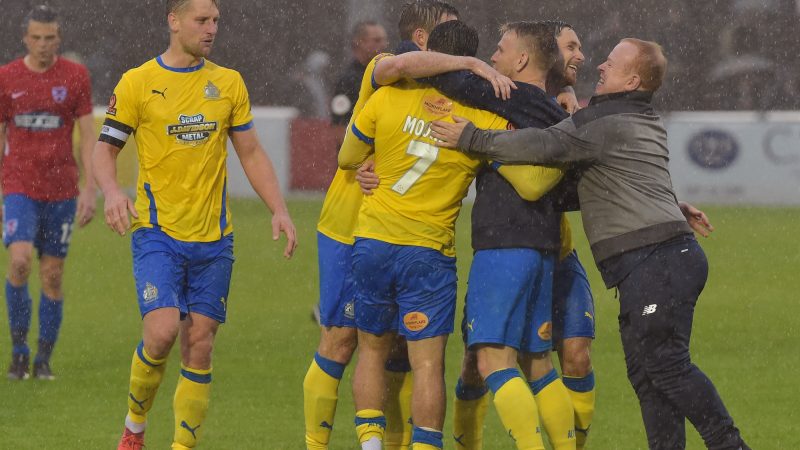 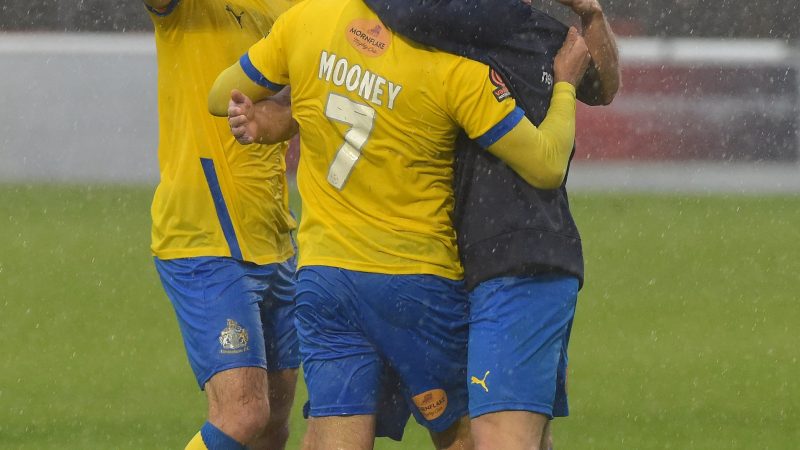 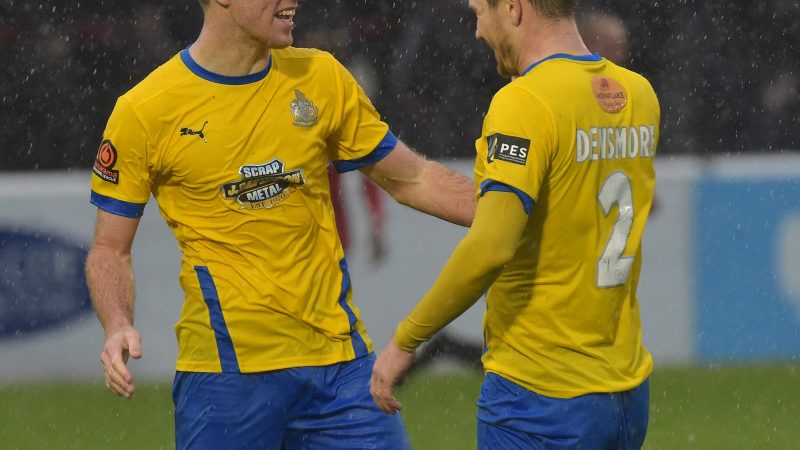 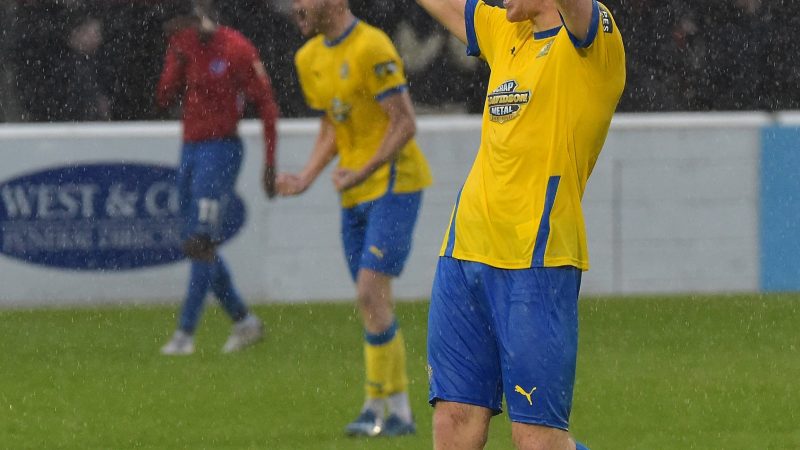 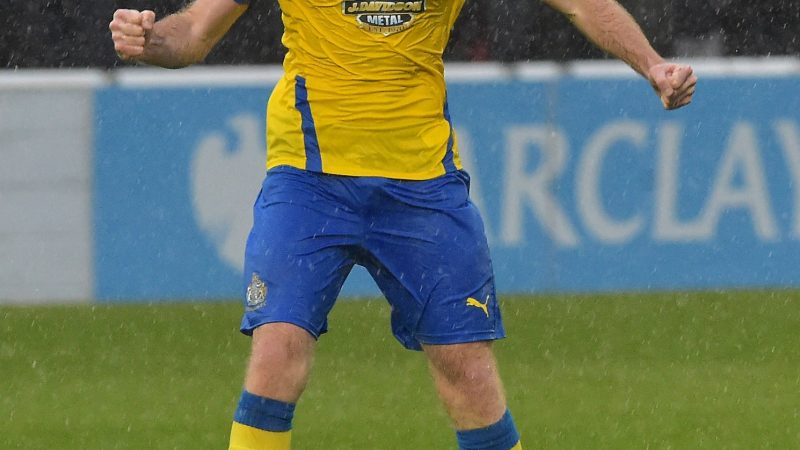 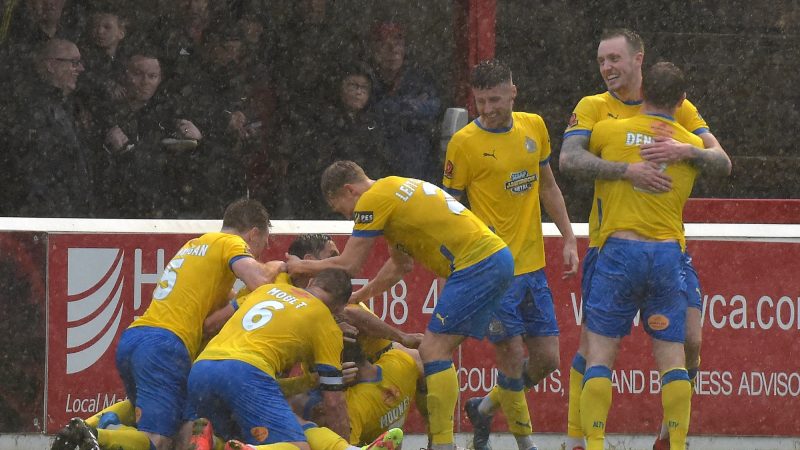 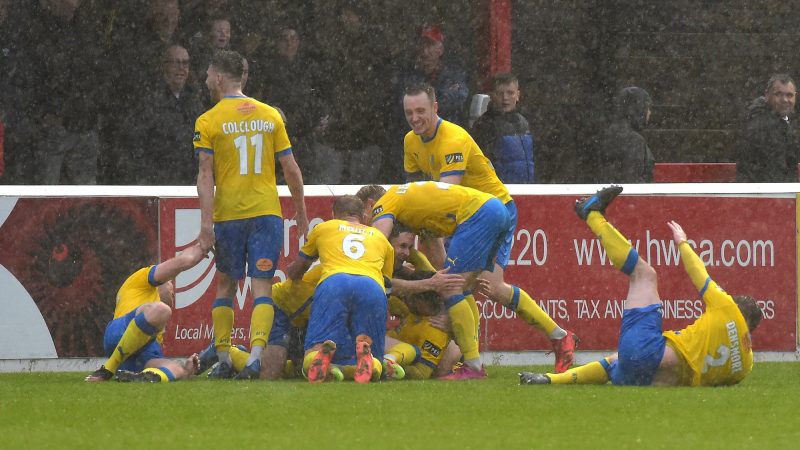 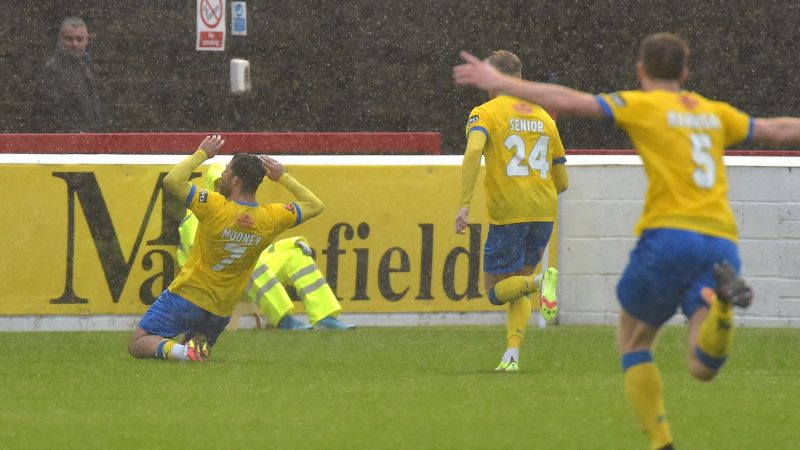 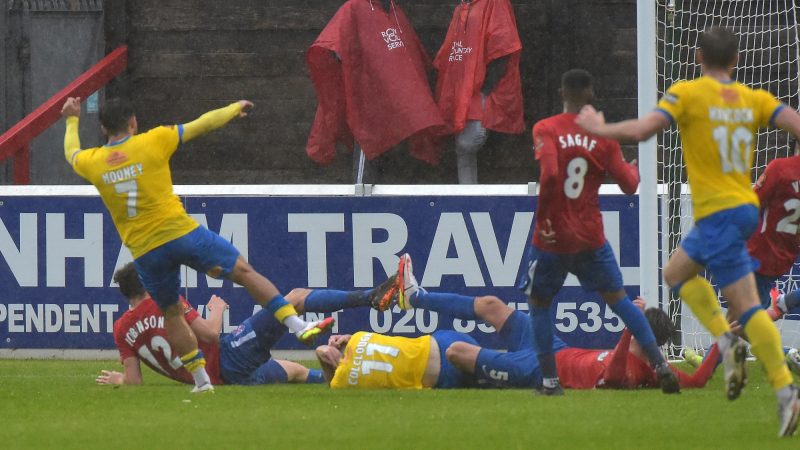 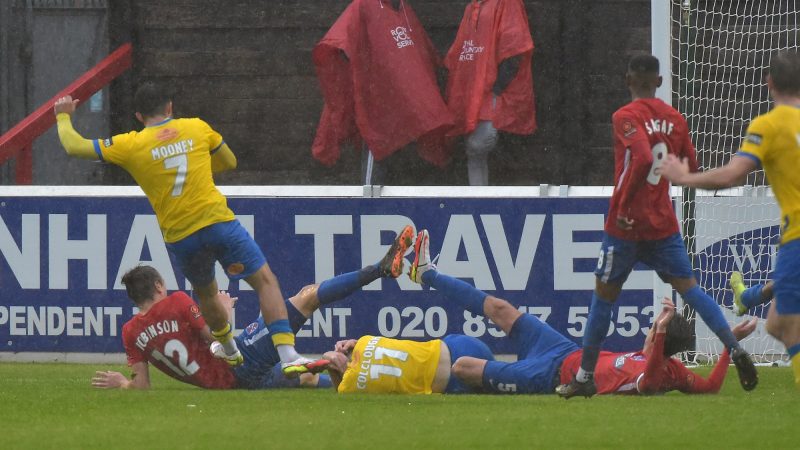 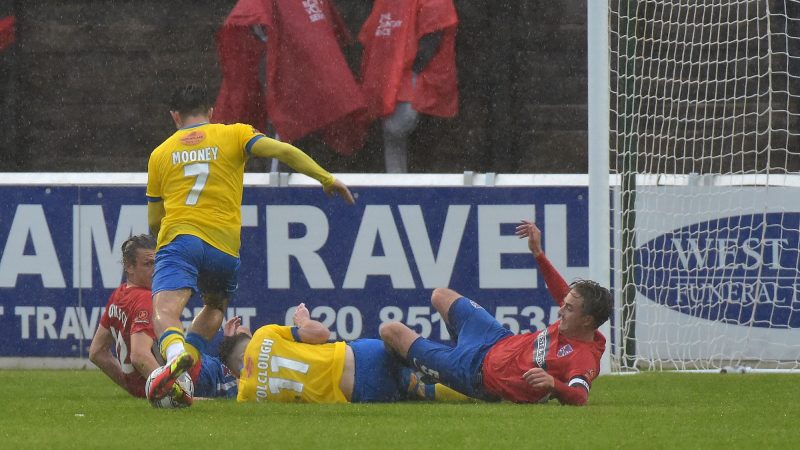 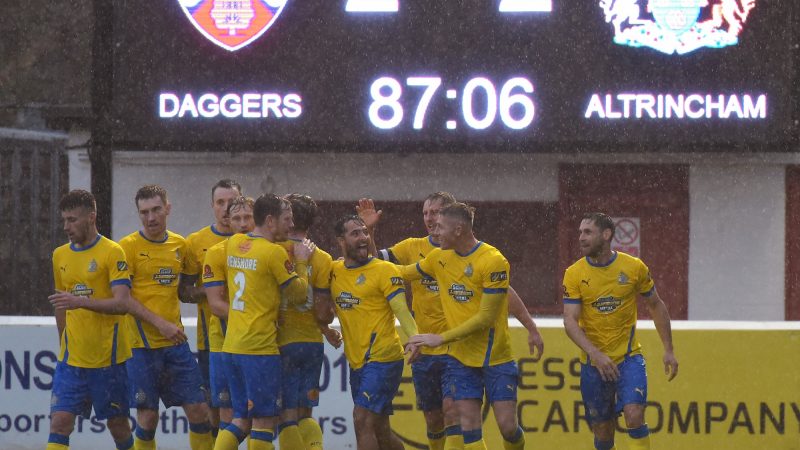 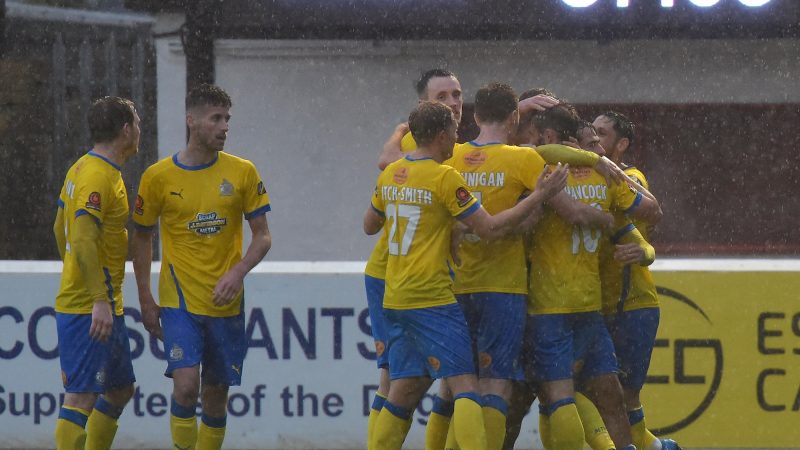 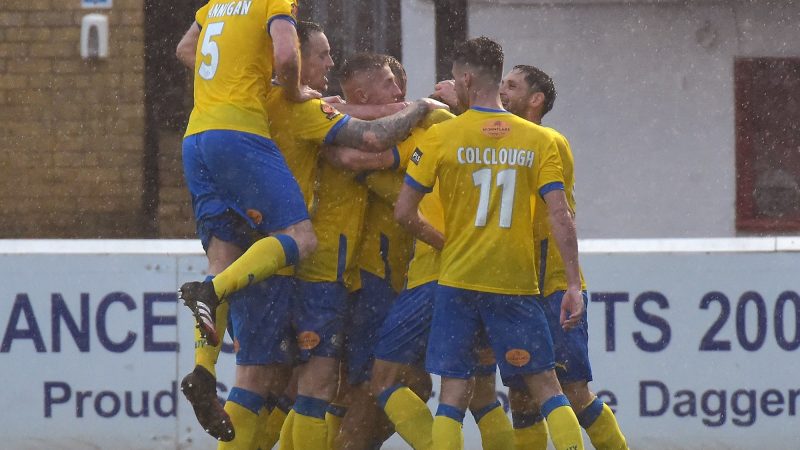 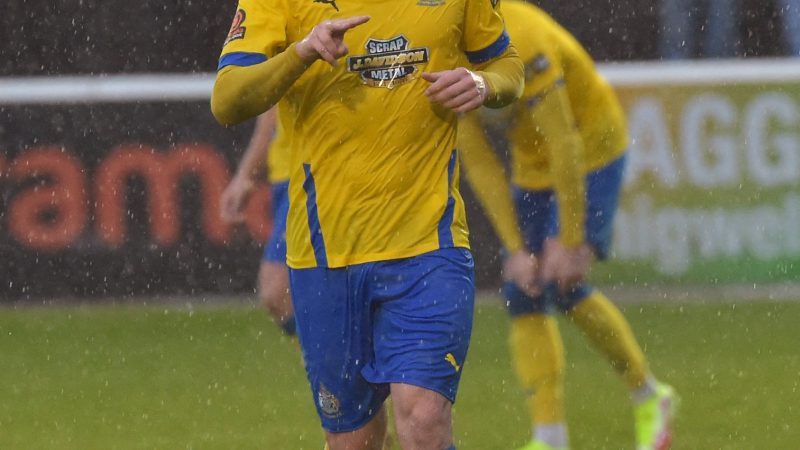 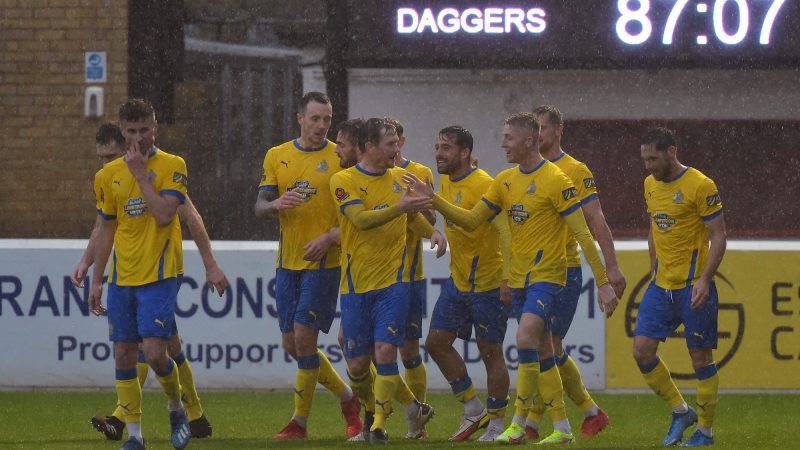