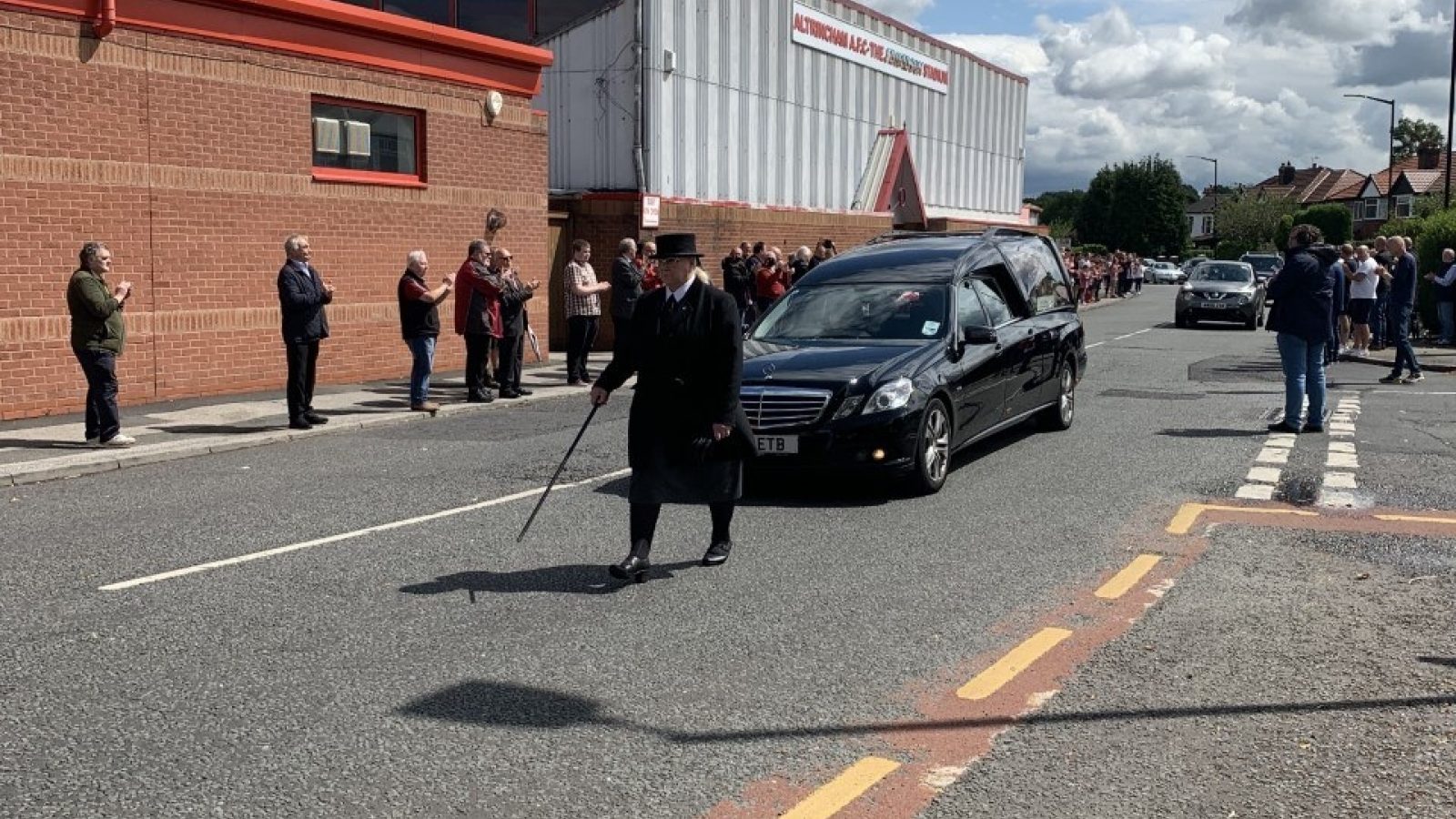 There was a huge turnout at The J.Davidson Stadium on Monday lunchtime to salute the funeral cortège of George Heslop.

Brian Flynn's tribute to George, printed in the limited edition match programme for the Play-Off Elimination Round game against Chester is reproduced below.

A Tribute to George Heslop

My earliest recollections of George Heslop are from 1973, when I started to go to away games on the supporters’ coach. My first trip was to Bradford Park Avenue on January 6th 1973. I can’t remember if George organised the coaches in those days but he was certainly the focal point & unofficial leader of the coach pack, holding court on the back seat, where he kept everyone entertained, there & back, whatever the outcome of the game.

He was a like a 1970’s hybrid of Mark Eckersall & Pete Hughes, the go to guy.When my brother & I were intercepted by a few of the Gainsborough Trinity ‘razor squad’ on the way back to the coach after the opening game of the 1976/7 season, it was George who was first off the coach to begin the rescue of the Flynn brothers!

George was a prime mover in setting up and playing for an Altrincham FC supporters’ Sunday League team in the late 1970’s & this is where Thomas George Boyd Heslop learned his football leadership trade, going on to manage Altrincham FC’s youth team for more than 20 years until retiring just 4 years ago. He was hugely successful & I cannot think of another manager who has won more trophies.

In his last season, I sat next to George on the coach for an FA Youth Cup midweek tie at Newcastle Benfield & saw at first hand how well he managed a coachload of teenagers & their parents on a really long trip. The evening finished with a short, heartfelt thank you to everyone on the coach for their part in helping the team to a 2-1 win up in the North East.

In June 1995, with the club on the point of going under, in the wake of the departure of Chairman, John Maunders, it was George Heslop who delivered a memorable rousing speech at the infamous ‘Ridgeway Road Meeting’ that was the starting point in saving the club from going out of existence.

“I was lucky enough to commentate with him on a few occasions and he was always witty, trenchant, insightful and concise. His reading of the game was immaculate”.

My own favourite Radio Robins moment with George was at Worcester City at an FA Trophy game in 2012. I mentioned that the ground was a lovely old ground with bags of character but was beginning to show its age. George picked up the microphone & said “Well, I think it’s a bit like me……it’s seen better days”.

Despite failing health in recent times, George kept right on to the end of the Alty road. He told me at our last home game against Spennymoor in March, that he was due to go into hospital for an eye operation, but it had been cancelled.

George’s love for the club extended to getting his wife Jenny & daughter Sally involved. Jenny was the friendly face in the bar in the Noel White Suite & the club’s Lottery manager for many years & I dread to think how many Altrincham kits she has washed in the Heslop Launderette in Timperley! Sally was also a regular behind the bar for many years & is a longstanding supporter.

In more than 70 years watching Altrincham FC, George saw it all. He will be universally missed by everyone at the club & will be remembered as one of the true greats of Altrincham Football Club.