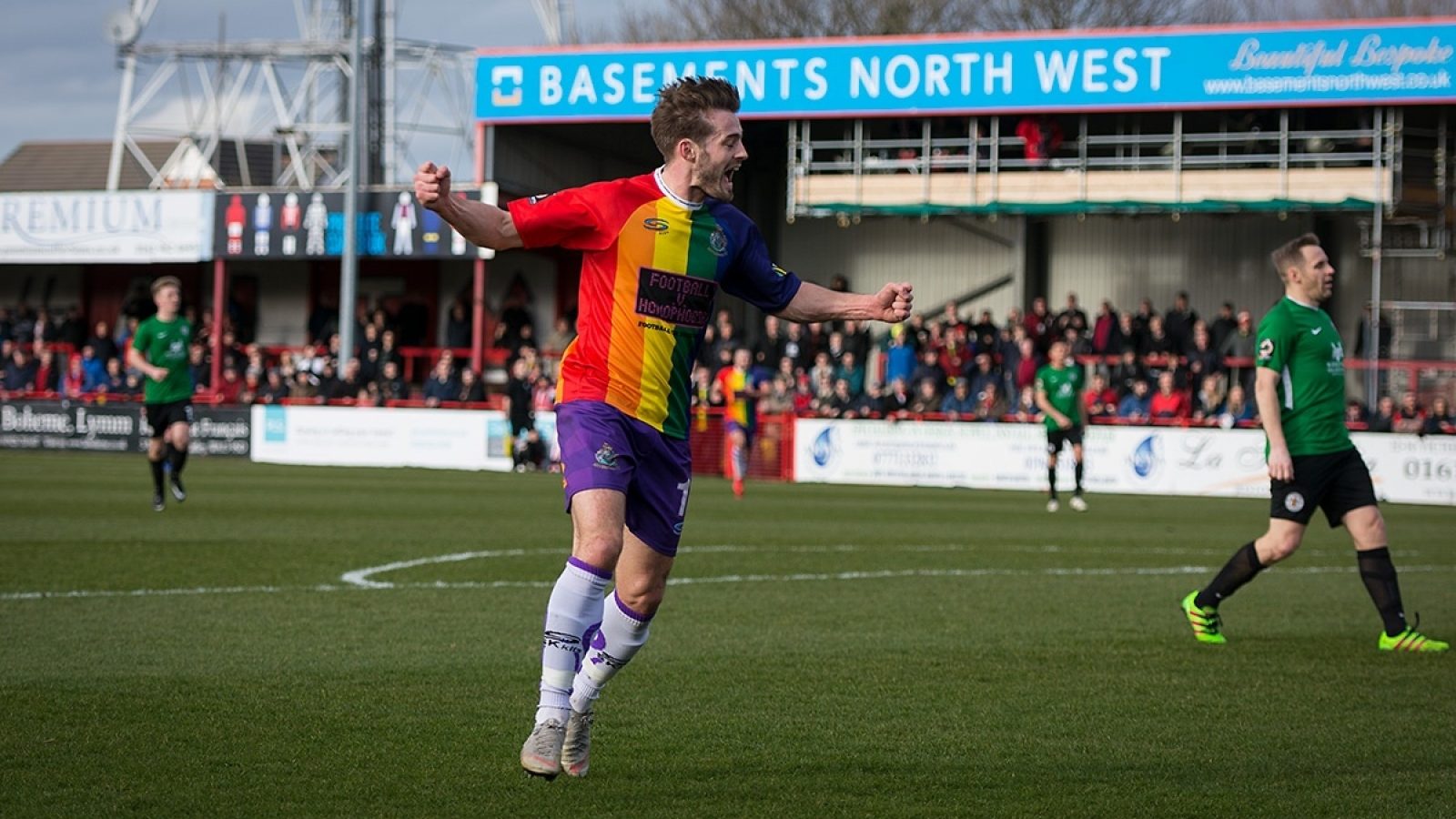 The shirt, worn in February 2019 in a Vanarama National League North game versus Bradford Park Avenue, was modelled on the LGBT Pride flag, and helped raise awareness during Football v Homophobia’s Month of Action. The one-off shirts were auctioned off after the game, with all proceeds going to LGBT+ youth organisation, The Proud Trust.

“The decision to wear the Football v Homophobia shirt was an exciting and bold move by the Club and the players deserve enormous credit. I’m proud of the enduring impact that the shirt continues to have by carrying the message that discrimination of any kind is not welcome in football” Jordan Tyms – Head of Inclusion, Altrincham FC

The museum’s latest exhibition unpicks the global fascination with football shirts and how they have influenced football culture, design, fashion and technology.

With well over 200 shirts on display, STRIP! is one of the largest curated exhibitions of football shirts ever assembled in this country.

It will examine how football shirts have developed from mere kit to genuine objects of desire, looking at the design of the football shirt, from the functional to the aesthetic, influential designers and manufacturers and the rise of the football hipster, as well as detailing iconic shirts and shirt disasters.

Shirts from the museum’s own collection will be on display, alongside loans from Classic Football Shirts, kit manufacturers including Adidas, Admiral, Hummel and Umbro, specialist collectors and enthusiasts and football clubs. It will also feature interviews with designers including Jürgen Rank, Senior Design Director at Adidas (who is overseeing the design of their Euro 2020 range) and Bert Patrick, formerly of Admiral and credited in 1974 with pioneering the replica shirt industry with the first commercially available England shirt.

Illustrator Mark Johnson will be designing shirt mash-up collage terrace banners to complement the exhibition and John Devlin, designer and author of the True Colours book series, is acting as a consultant.

Jon Sutton, National Football Museum’s lead curator for the exhibition, said: “Football shirt culture has become a huge phenomenon and has devotees across the world. While fans will still buy a shirt to show support for their own team, there is a huge interest in international sides, special editions and a nostalgia for classic designs of the past.  Fans will obsess over the details of colour combinations, placement of logos and even the sponsors of the shirt.  While many of the shirts on display will be remembered with affection there will also be a few disasters in there too!”

“We’re sure this exhibition will appeal to anyone with an interest in design, fashion and technology.”

To coincide with the launch of the exhibition the museum has collaborated with Manchester-born artist and illustrator Stanley Chow on a newly commissioned National Football Museum shirt, manufactured by Nottingham based brand PlayerLayer. The shirt made from 50% bamboo charcoal, will be worn by staff, with a limited number available for sale at the museum shop.

Iconic shirts on display will include England's home Umbro shirt as worn by the Three Lions at Italia '90, Brazil’s classic 1970 World Cup shirt as worn by Pele and West Germany’s 1988-1990 designed by legendary Adidas designer Ina Franzmann.  Kit manufacturers involved with the exhibition include Adidas, Admiral, Hummel, PlayerLayer and Umbro.

The National Football Museum is England’s only national museum for football. It is a registered charity and was established and its collection acquired thanks to £9.3m investment by the Heritage Lottery Fund.  Its vision is to become a leading national museum by 2022, exploring why football is the game of our lives.  The museum’s social purpose is to provide equal opportunity for all to enjoy football culture.