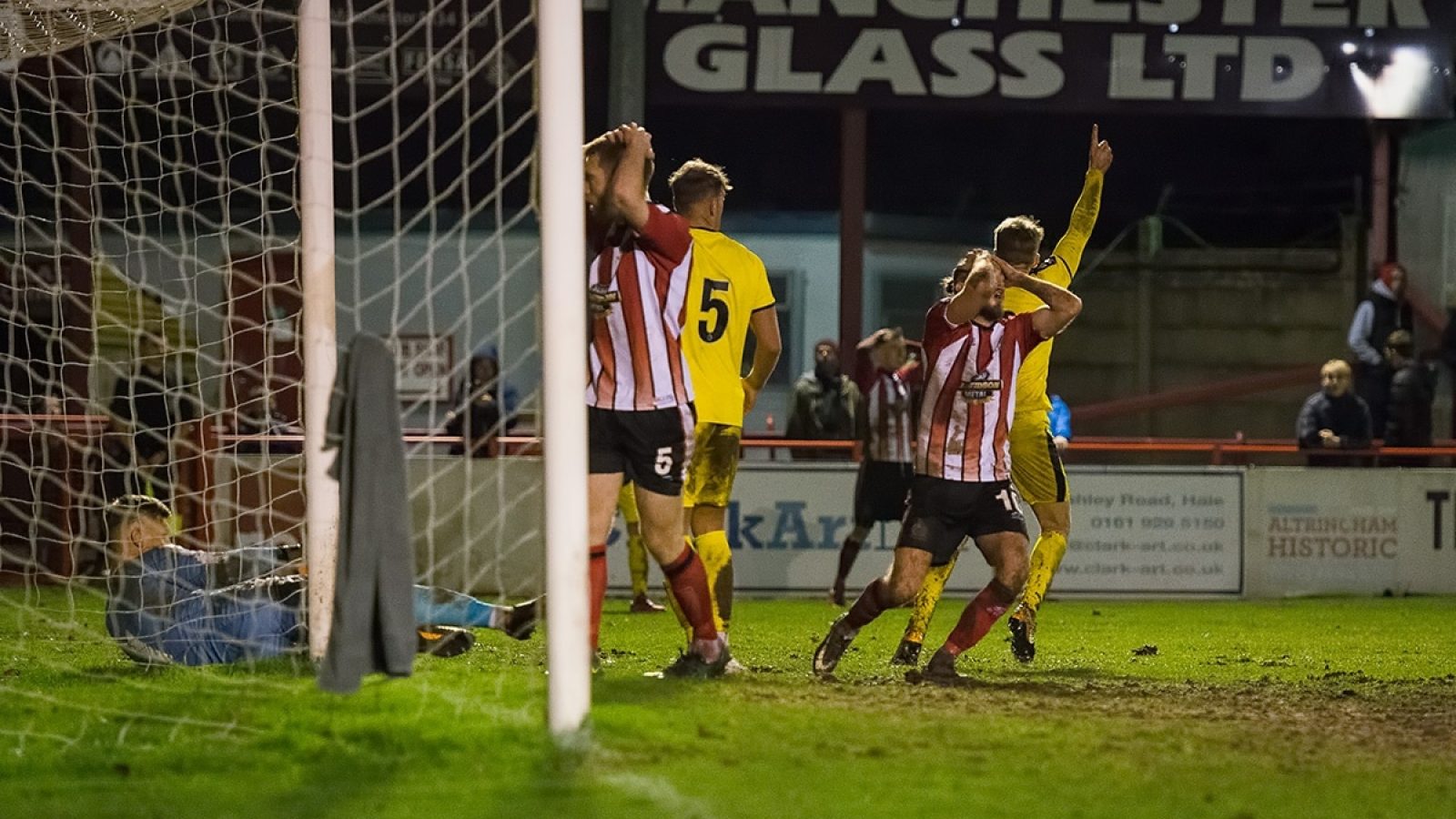 Altrincham remain undefeated in the Vanarama National League North since the end of September but had to settle for a draw after being denied a stoppage-time winner by an offside flag in a rip-roaring game at The J.Davidson Stadium.

Trailing 3-1 shortly before half-time, Alty did well to salvage a point but so nearly claimed all three after launching one last attack, with the clock showing all six added minutes had already ticked by.

Sensing time was up and a direct approach was his only hope, midfielder Sean Williams, on as substitute, set his sights from the best part of 30 yards and let fly with a fierce drive that looked bound for the top corner.

Keeper Jonny Maddison reacted well with an outstretched right hand that sent the ball spinning high into the air, and as it came back down, Ash Hemmings threw himself forward to apply the coup de grace, as he forced it over the line from close range.

But as he clambered to his feet and was mobbed by jubilant team-mates, the celebrations were cut short by a linesman indicating the on-loan winger had been in an offside position when the ball left Williams’ foot.

Darlington could rightly argue they had done enough to merit a point, but it was still a cruel stroke of misfortune for Alty after a stirring fightback that went agonisingly close to delivering an eighth win from their last nine league games.

Alty started on the front foot but were stunned when Darlington snatched a shock lead from their first meaningful attack in the eighth minute, as the ball was played to Tom Elliott on the left of the area for a shot that beat Tony Thompson at his near post.

Josh Hancock had always looked the obvious candidate to fill suspended striker Jordan Hulme’s boots, and he showed all the guile of a seasoned frontrunner to haul Alty level in the 11th minute. John Johnston’s right-wing cross tempted Maddison off his line, only for Hancock’s clever back-header to leave him stranded and send the ball looping into the far corner of the net, despite defender Will Smith’s best efforts to keep it out.

Johnston blazed over, after a Hemmings free-kick was only half-cleared, but Alty were struggling for their usual fluency in the first half and frequently found themselves stretched by some lightning raids by a lively Darlington side who bore little resemblance to the one turned over by the Robins earlier this season.

One such advance towards the Alty goal restored the visitors’ advantage, as Andrew Nelson whipped in a low cross from the right that evaded at least two defenders and left Harvey Saunders with a straightforward finish from inside the six-yard box.

It could have been worse soon after, when Connor Hampson underhit a back pass to leave Thompson in no man’s land, only for Romal Palmer to reprieve the Alty left-back by screwing his shot wide.

It did get worse a minute from half-time, and Alty were really up against it, as another failure to clear their lines was punished by a spectacular left-foot drive from Jordan Nicholson that flew in via the underside of the crossbar from outside the area.

A two-goal deficit would have taken some retrieving in the second half, but, crucially, it was halved in the few remaining moments of an eventful opening 45 minutes, as Hampson curled in an inviting cross from the left and Max Harrop met it with a header any centre-forward would have claimed with pride.

There is an unshakeable self-belief about Phil Parkinson’s squad of players, and it shone through again, as any misgivings over their first-half failings were swept aside by a sustained spell of purposeful attacking play that was exemplified by the move that made it 3-3 in the 65th minute.

Harrop had the vision to see a chipped through ball down the right flank and the ability to execute it to perfection, enabling Johnston to surge clear of his marker and whip in a cross from the bye-line that Hemmings flicked expertly past the keeper for his first Alty goal.

There was just the one scare for Alty, when Saunders got to a bouncing ball before the advancing Thompson and steered a header inches wide, but it was otherwise a case of laying siege to the Darlington goal.

Johnston went tantalisingly close to getting a touch to a drilled cross-shot by Hampson, and Maddison had to be brave to save at Hemmings’ feet after the winger swivelled and tried to apply a finishing touch to another dangerous low cross from the right by Johnston.

Harrop may not be renowned for his aerial prowess, but he nearly delivered again in the 90th minute with a near-post header into the side netting from yet another Johnston cross after a trademark show of strength from Jake Moult had won possession near the corner flag.

That was surely that, unless someone could produce one last twist from somewhere. Hemmings did his best to oblige, bundling the ball over the line from Maddison’s instinctive save, only for a raised flag to deny a fairytale ending to what had been an enthralling comeback and a match to remember.