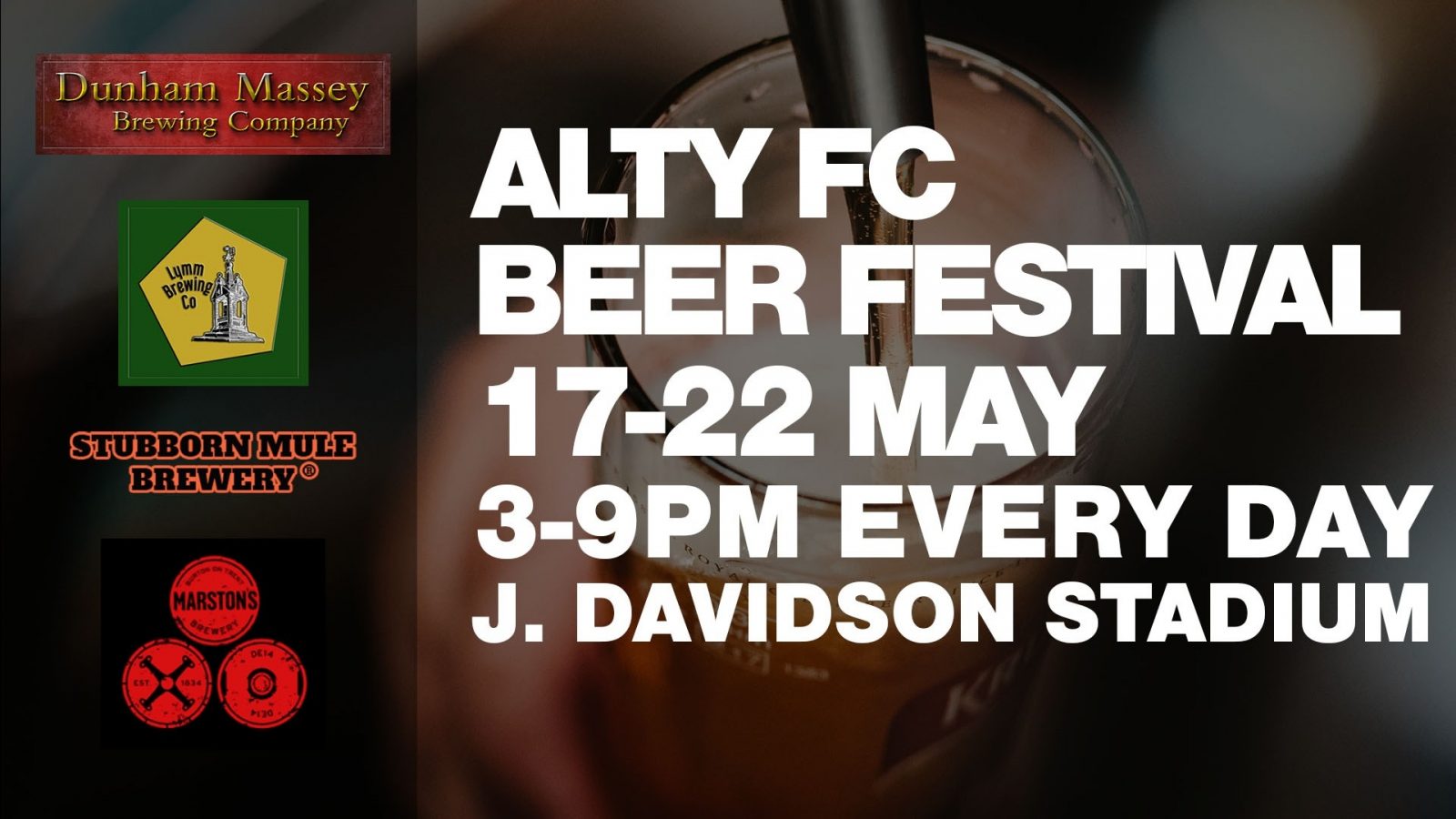 There is no entrance fee and tokens will be available to buy on arrival to purchase drinks.

All week we'll have events to entertain in and around the Stadium.

Thursday - Our second annual corporate five-a-side tournament, there are still a few places available at an entry fee of £300 per team, and apart from playing on the hallowed turf, there is the added attraction of a hospitality package for the winners. It all starts at 5pm, and anyone wanting to grab one of those few spare places should email [email protected].

Come along and support the club and these local brewers!

Altrincham have come up with a not-to-be-missed bonus social event to supplement the end-of-season schedule and ensure celebrations for the most momentous campaign in the club’s history extend beyond this weekend.

The stage is set for an afternoon of unbridled emotion on Sunday when the curtain comes down on not only another Vanarama National League season but seven stellar Alty careers.

There will be no holding back the tears, as the super septet take their leave and head away from Moss Lane for the last time, but the celebration of all things Alty will not end there.

Forty-eight hours later, it’s the beers that will be flowing, following the club’s inspired decision to revive an occasion that was beginning to attain cult status among Robins fans until being stopped in its tracks by Covid.

Yes, the Beer Festival is back after an enforced break, and it promises to be bigger and better than ever after the club organised a series of special attractions to complement the obvious appeal of sampling local ales at their finest.

The region’s leading brewers have been falling over themselves to have their barrels included on the list of delights awaiting Alty’s ale aficionados, and, at the last count, Stubborn Mule, Lymm Brewery, Dunham Massey and Marston’s Brewery were all signed up in readiness for Tuesday’s launch.

The doors open for the four-day extravaganza at 3pm, with entry completely free of charge and tokens available to buy on entry for the purchase of drinks.

What better way to wile away the hours on a sunny summer’s day than by discussing the possible make-up of a new-look fully-professional Alty squad with fellow-fans while quaffing a foaming pint or two?

And there’s more. A fashion show kicking off with a glass of fizz on arrival is on offer at just £7 per person on Wednesday evening, and the second annual corporate five-a-side tournament takes place the following evening.

There are junior girls’ tournaments as well, and so much more besides, running right through the week from Tuesday until Friday.

So, don’t forget, doors open at 1.30pm in readiness for a 3pm start on Sunday, when Yeovil take to the stage as very much the support act to an Alty side saying thanks and farewell to two bona fide legends in Shaun Densmore and Jake Moult, with very nearly 1,000 appearances between them, and to Josh Hancock, Tony Thompson, Tom Hannigan, Connor Hampson and Andy White.

Phil Parkinson is fond of reminding us all how his players always keep going until the bitter end. He will demand no less on Sunday, and he will get it from players who are determined to give their departing team-mates a fitting send-off.