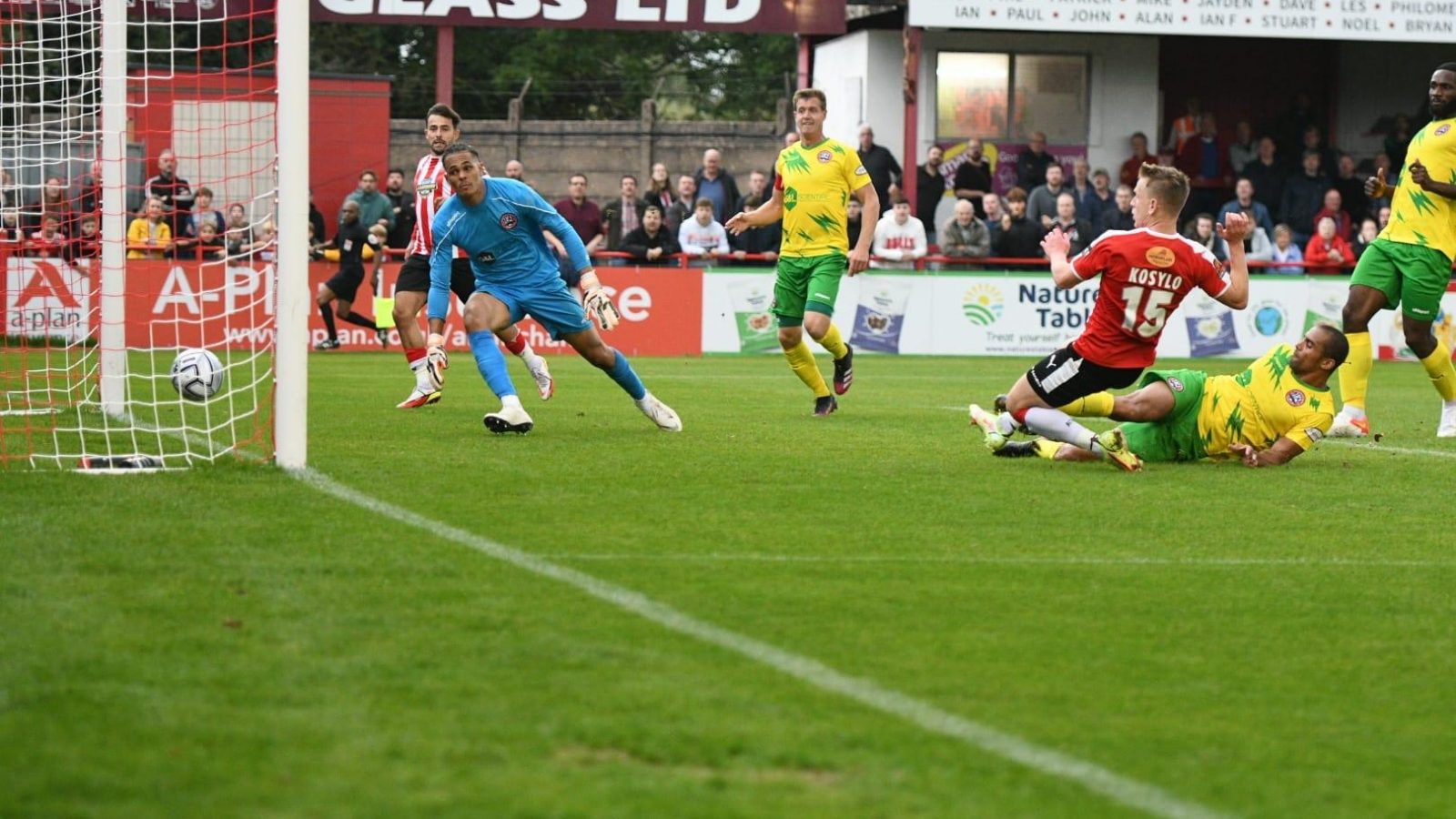 *Matt finish .. Matty Kosylo is perfectly placed to force Dan Mooney's cross over the line, and Alty are 1-0 up. Picture by Michael Ripley.

It has always been the aim under Phil Parkinson to play attractive football, and it’s certainly attracting people to The J.Davidson Stadium.

A visit from Maidenhead United is never likely to pack the away end or be placed in the must-see category by too many neutrals, yet no fewer than 2,091 poured into Alty’s Moss Lane headquarters to see if the Robins could continue their highly impressive start to the season.

Over 2,000 of them were Alty fans, and they weren’t disappointed as second-half goals from Matty Kosylo and substitute Tom Peers made it four wins out of five at home and lifted the Robins to eighth in the Vanarama National League, with two games in hand on all the teams above them, except Bromley.

The good times are well and truly rolling, with Alty no longer having to rely on a big away contingent to record a bumper crowd and the ground rocking to the sound of appreciative fans lapping up a brand of football that is both winning and watchable.

It may have been tight in the first half, with little in it and Ryan Colclough’s absence through illness appearing to be felt keenly by the home team, but once Alty got into their stride in the second half, the points were heading in only one direction.

Tony Thompson had to be on his guard to tip a Reece Smith effort round the near post in the seventh minute, but his opposite number Rhys Lovett was always the busier of the two keepers.

When Kosylo cleverly allowed a crossfield pass from the right to fly past him into the path of Joel Senior in the 13th minute, the Alty full-back found himself in a great position, only to mishit a shot straight at Lovett.

Thompson’s distribution triggered a sweeping move that ended with Dan Mooney going close after being set up by the energetic Ben Pringle in the 37th minute.

Finishing the half strongly, Alty went even closer in the 45th minute when, after Kosylo rolled the ball to him, Josh Hancock worked enough space for a shot that was heading just inside the right post until Maidenhead skipper Alan Massey flung himself in the way to keep his side level.

The visitors stayed under the cosh in the second half, so much so that the nearest they came to a goal was when a brief misunderstanding between Thompson and Tom Hannigan almost let in substitute Josh Kelly, the Alty keeper reacting in the nick of time to smother the ball at the forward’s feet.

The rest of the time, Thompson was a virtual spectator as Alty went in search of a breakthrough, Shaun Densmore having a shot blocked and Kosylo’s follow-up being saved before the Maidenhead defence was finally breached in the 56th minute.

Densmore’s brilliant ball down the right opened up space for Mooney to motor towards the bye-line before crossing for Kosylo to force it over the line from point-blank range.

A Hannigan header from Kosylo’s corner was blocked near the line in the 71st minute and Mooney fired narrowly over after being sent clear by substitute Brad Jackson as Alty piled on the pressure.

A decisive second strike had to come, but the Maidenhead goal was living a charmed life, as Lovett saved brilliantly to deny Marcus Dinanga, after the Alty striker had been put through by a combination between Hancock and Kosylo, and Jackson forced another fine stop by the overworked keeper.

A second goal did duly arrive in the 90th minute, and it said everything about this Alty team in their current mood.

Substitute Dean Furman gave the ball away in a dangerous position - a collector’s item in itself - but instantly won it back before launching a move that ended with Jackson crossing from the right for Peers to finish off from close range.

What a way to round off another great afternoon at The J.Davidson Stadium from a team who are looking increasingly at home in the illustrious company they are keeping these days and beginning to think survival in the National League is the least of their ambitions.