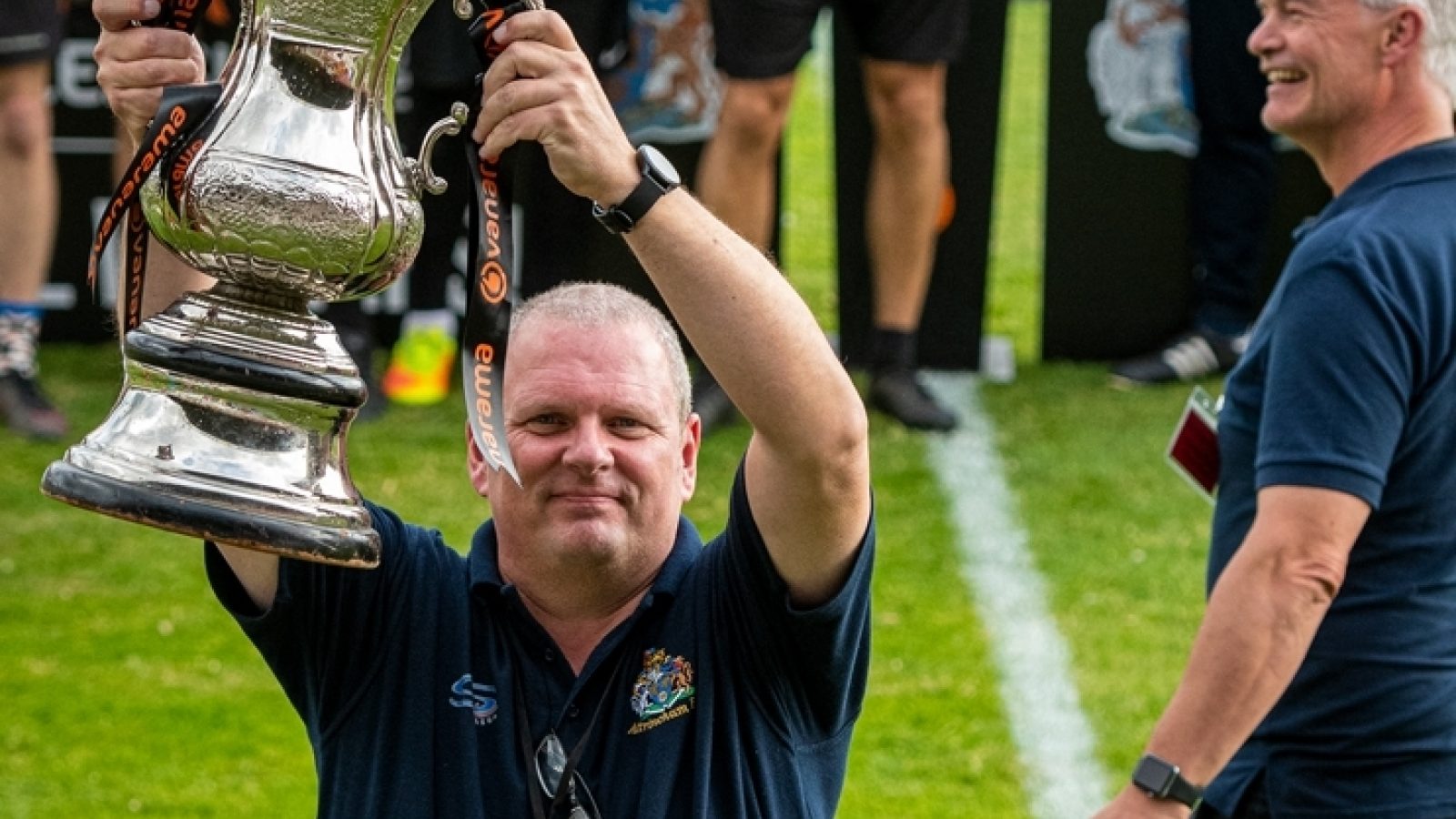 *Up for the Cup ... Paul Carter jubilantly holds aloft the play-off trophy after the final at Boston United. Picture by Michael Ripley.

Paul Carter has been appointed full-time General Manager of Altrincham FC in a further indication of the club's ambition to keep developing and improving off the pitch as well as on it.

Paul has made a huge impact at The J.Davidson Stadium since arriving from Stalybridge Celtic in June last year and taking over as club secretary from Derek Wilshaw, who retired after 13 years' sterling service.

Apart from carrying on seamlessly where Derek left off with routine day-to-day administrative duties, Paul rose to the complex challenge of dealing with Covid-19 restrictions, ensuring the club adhered to every stipulation in the build-up to the promotion play-offs.

When the Robins duly secured their place in the Vanarama National League with three straight away wins, culminating in a 1-0 triumph in the final at Boston United, it was seen as a mirror image of the strides being taken by a dynamic, new-look board, whose focus has increasingly been on expanding the club and enabling the team to compete at the highest level possible.

It was increasingly felt that providing the means for supporting manager Phil Parkinson's plans on the pitch and improving the stadium and club in general off it justified the appointment of a full-time administrator, in the form of a General Manager, and Paul was quickly identified as the ideal candidate.

Reflecting on his new role, Paul said: 'I am obviously delighted to have been appointed General Manager at Altrincham FC, and I am relishing the opportunity to combine the position of Club Secretary with these new responsibilities and fulfil both roles.

'I had indicated to some of the Directors that if such a role became available, then I would be interested in talking to the club about it. I received a call from Lawrence a few weeks ago, where he pitched the job to me, and it appealed to me instantly.

'Since taking the Secretary’s job at Stalybridge Celtic some three years ago now, I knew that, if the opportunity arose, I wanted to work within a football club full-time.

'It is an honour to work for a club of Altrincham’s standing in the football world. I am excited at the prospect of being part of the superb team at Altrincham going forward and the future plans that the Board have for the ground and the club in general.

'Of course, it meant resigning from my previous job. I had been a sales rep for well over 35 years, travelling up and down the country selling lots of different products. I worked mainly in two industries; firstly, in the Automotive Aftermarket for many years selling car parts and, secondly, for the last 15 years, in the Commercial Cleaning Machine Industry, selling pressure washers, industrial vacuum cleaners and floor cleaning machines.

'It was becoming more difficult trying to juggle the two jobs, as the demands of playing in a higher division are much more intense and require a lot more time and energy, so once I was offered the role of General Manager at Altrincham, it was a no-brainer for me to make the decision to change jobs.

'I had an enjoyable time in my previous roles, and met lots of people who are still friends to this day, but the time was right for a change and a new challenge.

'I see the new role as a continuation of the outstanding time and effort that Grahame and Karen Rowley and Derek Wilshaw put into the club over many many years. I am fortunate to have this full-time position, whereas Grahame, Karen and Derek did it all for nothing other than the love of the club.

'They are massive boots to fill, and I know I have a lot to learn, but all three of them, plus the current Board of Directors, have offered their unwavering support to me. Yes, there will be a lot of responsibility, and I see the main objective being to safeguard the smooth day-to-day administrative running of the football club.

'I don’t see it differing too much from the job I was doing as Secretary, the main difference being that I will be dealing with daily financial matters as well as assisting Phil and Rob on footballing issues.

'I will continue to do my matchday role on Saturdays, and for midweek games both home and away, as well as assisting with administration for the reserves, youth and ladies' teams when required to.

'Covid-19 has changed the way we all now operate in everyday life and obviously this includes the football club. From the moment the Vanarama North season was suspended in March to us then being involved in the play-offs, nothing has really seemed normal.

'We had Covid testing for staff and players for the play-offs, and we had to introduce strict protocols to how we operated as a club from training to matchdays. I think it brought all parts of the club closer together, as we all had to work hard to ensure the players were kept safe and well and that the club could still operate as normally as possible, despite lockdown conditions.

'It was my greatest thrill to see us win the play-off final and a credit to every single person associated with the club that we achieved the feat. The only disappointing thing was that the Alty faithful couldn’t be at York Street on that day in August, and it’s still not real football without our fans in the stadium cheering the lads on.

'I think my appointment shows that the club has major ambitions for the future. We all know the plans the Board have for the ground moving forward, and I am happy to be able to be a part of those plans.

'Most of the clubs we play in this League are full-time, and that’s something I know the Board would eventually like Altrincham to be. With that in mind, I hope my appointment will be the first of many full-time positions at the club.

'The professionalism at this club is more than I expected when Grahame gave me the opportunity to join Alty 18 months ago. We all have to have ambition, and Altrincham FC has it in abundance. I am certain the majority of what is planned moving forward will come to fruition. Achievement has been at the forefront of what we've all done together in recent years, and I'm confident that will continue to be the case.'

Co-chairman Bill Waterson hailed the appointment as another positive step forward in the club's development, saying: 'Paul has made a significant impact since joining us as Football Secretary from Stalybridge Celtic at the start of last season.  He was a key player in steering us through the complexities of the play-offs, and we are delighted he is now taking up this bigger role with the club.'

Altrincham's board are also delighted to announce the appointment of Samantha Mackenzie to the voluntary position of Partnerships Manager, with specific responsibility for managing the club's major sponsors.

'Our key sponsors have been fantastically loyal to Alty through the trials and tribulations of the last few months,' added Bill Waterson. 'We are very keen to support them in return, and Sam joining the club gives our sponsors a dedicated resource to manage all their needs with Alty.  Sam brings a breadth of experience and will make a huge difference for us.'