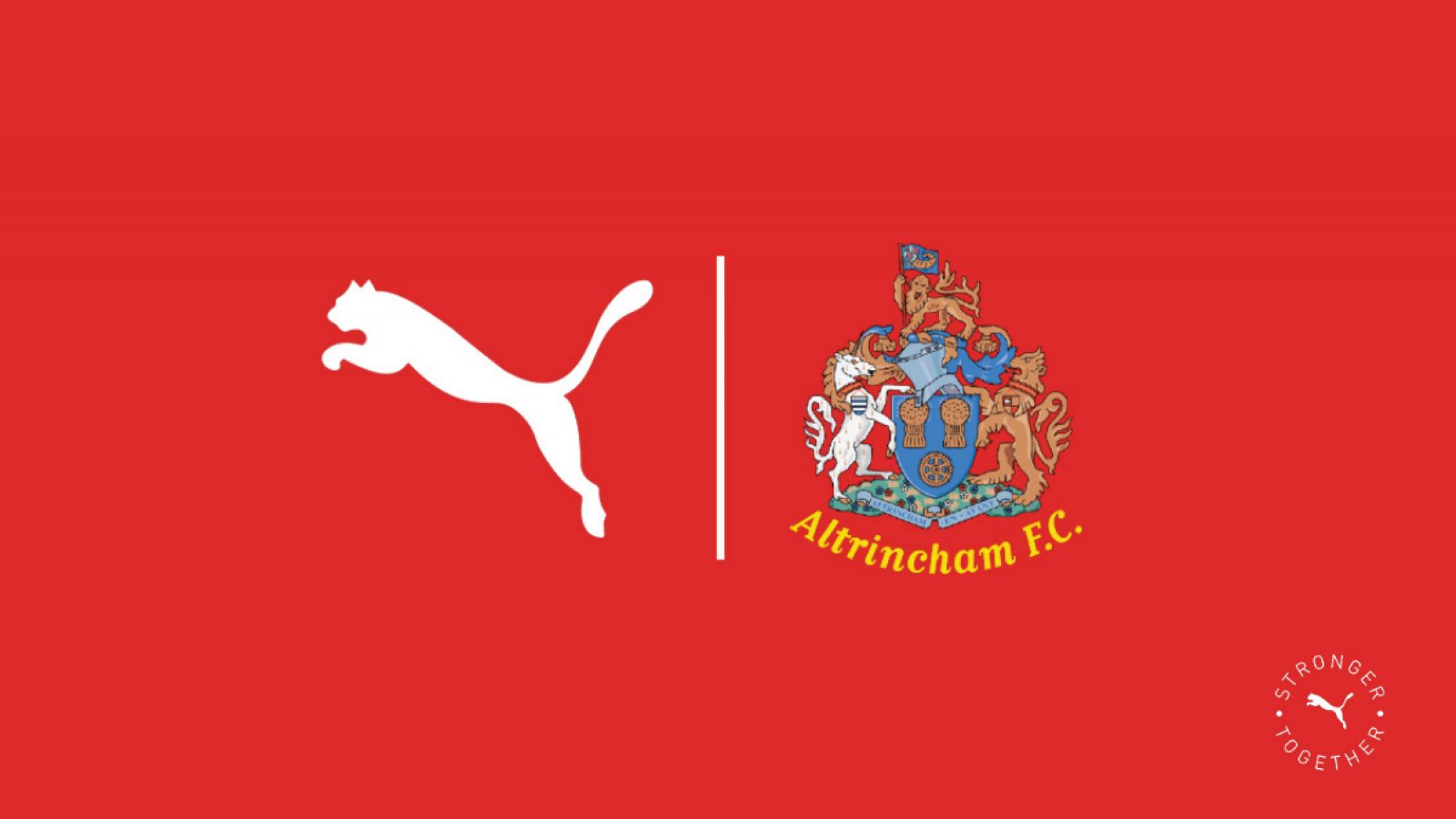 Altrincham have taken another significant step towards achieving their long-term goals after landing a lucrative four-year partnership deal with kit giants Puma.

In a spectacular commercial coup that reflects recent advancements on and off the pitch at The J.Davidson Stadium, new-look Alty home and away strips will now join those worn by the likes of Manchester City, Borussia Dortmund and AC Milan on the Puma production line.

The deal, which will take effect at the start of next season, will make a material difference to Alty’s revenue streams and has been hailed as further evidence of the strides being made under manager Phil Parkinson and a dynamic, multi-faceted board of directors.

‘This is a really exciting development that is very much in keeping with the board’s forward-thinking approach to taking the club as far as we possibly can,’ said Alty co-chairman Lawrence Looney. ‘To that end, we have ambitious plans and objectives which are being implemented on a regular basis, and it’s great we are now able to confirm our partnership with Puma.

‘We are talking about one of the world’s largest and foremost sportswear manufacturers, and it says everything about the direction we are going in that we are aligning ourselves with them for the next four years.

‘It is a major breakthrough we hope will excite and capture the imagination of Alty fans everywhere, and there is more to it than just a financial gain. There is prestige, of course, and there is also a benefit for the players because of the extra comfort provided by the very latest design technology that Puma use in all their football shirts.

‘These are exciting times for Altrincham Football Club, with tangible progress on and off the pitch, and it is another statement of intent to be able to announce that Puma will be our official kit supplier and retail partner from the start of the 2021-22 season. We are looking forward to a relationship that will last and suit both parties.’

The new Puma Altrincham range of merchandise will include replica shirts, training outfits and leisure wear, and Alty fans won’t have long to wait for a first glimpse of how the Robins will look at the start of next season, kitted out by the world-renowned German sportswear specialists.

The new-look home and away shirts will be ready for a public unveiling in the next few weeks and both will feature Puma’s dryCELL fabric, a moisture-controlling technology that draws sweat away from the skin and helps players keep dry and comfortable during games.

In addition to the kit deal, Puma will also provide retail support to the club, with a particular focus on point of sale at the stadium that will be reflected in a new, enhanced matchday retail presence in both the Community Sports Hall and the Fan Zone.

Commenting on another notable achievement for Alty’s board, director John Coyne said: ‘It is really important that we drive maximum value from all of our commercial deals, especially given the impact that Covid has had on revenue for the football club, and this is a great deal for a technical partnership for Altrincham.

‘Our retail presence has been much improved this season, and we’ve enjoyed record sales, which is testament to the loyalty of our supporters. The team working on this project - our kit committee - spent a lot of time working with potential suppliers, and Puma were the stand-out choice, given their portfolio of football clubs and the deal they have offered us. The technical quality of their garments was second to none.’

Puma, who also supply the Italy national team with their famous Azzurri jerseys, were just as enthusiastic about their latest link-up.

Alluding to clubs such as Tranmere Rovers who have made the transition from National League to Football League during a fruitful alliance with his company, Martin Ivison, from Puma UK, said: ‘Everyone at Puma is really excited and looking forward to starting our new partnership with Altrincham FC, and it will be great to see the team run out on the pitch in Puma next season.

‘Altrincham is a club which is clearly ambitious, and we’d like to think we are the lucky charm, as proven with other clubs who have been on the same journey to the Football League. We look forward to a long and successful partnership.’

To coincide with the new home kit unveiling next month, the club plan to run a competition open to all supporters, offering two lucky winners the chance to join the kit committee in September and have a say in future kit designs. More details nearer the time.