Ceesay can be the centre of attention and Sutton's solid as a rock, says Phil 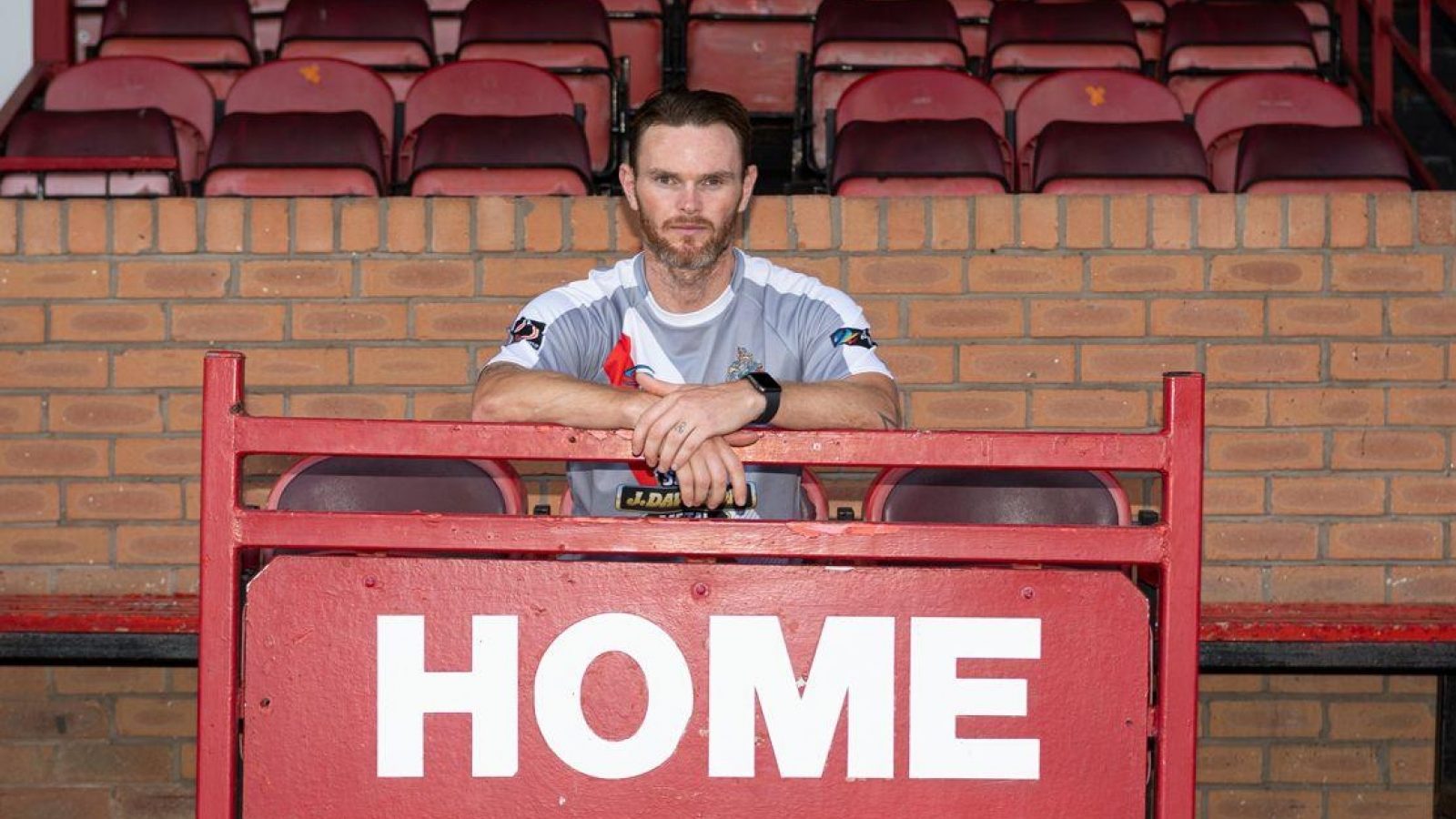 *'A young 34' - Ritchie Sutton is raring to go after donning Alty colours for the first time last night. Picture by Michael Ripley.

Altrincham manager Phil Parkinson spoke to press and media officer John Edwards after completing the signing of Yusifu Ceesay and Ritchie Sutton on two-year deals at The J.Davidson Stadium last night. Here is the interview in full.

Q: Alty fans certainly know all about Yusifu Ceesay - that’s a signing that should excite them, isn’t it?

A: I hope so. I have tracked Yusifu ever since his time with us on loan. It has been one of the longest negotiations I have ever been involved in, because he wants full-time football, and that proved a difficult gap to bridge. But playing at a higher level than we were before is appealing to him and enables him to see there is a pathway back to where he wants to be. From my point of view, I see in him something completely different to what we have here. Looking back at the level we’ve just come from, I have not seen anything like Yusifu. The speed, pace, skill, just the basic raw ability he’s got. He has got so much going for him. I know I’m picking someone from a completely different level to make this comparison, but he does remind me of Thierry Henry. I’m sure, one day, he will play through the middle. I don’t think he will always be a winger; he is more than capable of playing nine or 10. There is much more to him than just pace. He has got a really bright future, as long as he can stay injury-free, which is the gamble you take with really fast players. But I think it’s a risk worth taking, and I’m really looking forward to seeing him back in an Alty top.

Q: So what was the clincher that finally persuaded him to return to us?

A: It was very difficult, because he wanted full-time football, but I certainly think the step-up in division that we made by winning the play-offs definitely helped, because he is going to be surrounded by full-time outfits. I have tried to recruit players who are still hungry. Sometimes, when you get lads dropping down, they are quite happy to do so and to pick up a bit of cash along the way. Yusifu wants to drop down to go up two, and that mindset appeals to me. He just needs to realise where he is and focus on what we need to do, because he will face plenty of competition for a place. We are looking to strengthen in that area, and we are already very strong there, so he will have to be at his very best to get in. But we have all seen how good his very best is..

Q: I guess the ideal scenario would be for him to fulfil his ambitions with us, wouldn’t it?

A: Well, that’s why I’m here, to fulfil my ambitions. I have committed long-term, and so has Neil Sorvel, and I have pretty much tied down the rest of the squad to the duration Neil and I have signed on for. They all deserve that, and that’s what I’ve tried to do with new recruits. We can’t compete with other clubs in this division financially, but we can give security and longevity. I’m not in a position a lot of people told me I would be, with thousands of League players dropping down and you just cherry-pick the best. We have identified players we know will do a job for Altrincham and who I know personally. So we are going to be prudent, and I would like to think the signings I have made and the players who have been retained reflects that prudent approach and what we are trying to do here.

Q: At 25, there’s probably still scope for you and Neil to develop his game, isn’t there?

A: Absolutely. That is another point - Yusifu will have seen what we do here and what that can do for his game. When he was at Blackpool and they came here for a pre-season game, his team-mates were very complimentary in what he had been telling them about us, with regard to style of play, fan base and the way the club is run. So he knows what he is walking into. He wants full-time football, but maybe we can help him achieve that and maybe we can help him do it with us, if we keep going in the direction we’ve been going in.

Q: What about the hamstring problems he had - is that a worry?

A: Well, he is fully healed now. Medically, he is absolutely fine. We are taking every precaution we can, and he underwent a medical before signing. There are things in the contract he is willing to adhere to, because of past injuries. That is a fantastic attitude on his part, because not every player would agree to that. He is taking a risk with us, because we are not full-time, but we are taking an element of risk with him, because of his track record on the injury front. The rewards outweigh the risks, though, because if he is right and he contributes anywhere near what he can do for us, he will have a really successful season and so will we.

A: We were going to bring in an up-and-coming young centre-half, as we normally do, but I just felt that would have been a risk, following our promotion to the National League. So, for one, we needed someone who wants to come here, two, somebody who I know - and I know Ritchie from his youth days at Crewe after seeing him develop and grow into the player and man he is today - and, lastly, someone who has a wealth of experience at the level we are going into. We have had footballing centre-halves who can mix it physically. Well, Ritchie can mix it physically, that’s for sure. You have to be able to do that at the levels he has played at. He has a wealth of experience, and he was brought up in the Crewe Academy environment, so he ticks a lot of boxes for us.

Q: One of his past managers sang his praises as an attacking right-back, so he’s got that string to his bow as well, has he?

A: (chuckling) Yes, I saw that, but those days have definitely gone! I know how he was brought up at Crewe and I have seen him play football, but the biggest thing he will bring us is experience and defensive strength. He also knows we’ve got a young centre-half, in Toby Mullarkey, who we really believe in, and I’m sure Ritchie can help bring him along and develop. Ritchie isn’t here just to mentor others. He can make a real impact for us in his own right, but he has this innate ability to recognise that he can help a young defender like Toby to fulfil his ambitions and progress like James Jones did. However, he’s come to play and we all know how good Tom Hannigan and Toby are, so it should make for very healthy competition.

Q: At least two of his previous managers have said he loves defending, which backs up your point, doesn’t it?

A: Yes, that is what I meant. He is a dominant, defence-minded centre-half. You don’t get that very often, where defenders actually enjoy that side of the game, but he does. So many like to play out from the back and read the game, but Ritchie likes to stop people. He can play as well, so I don’t want people thinking we just brought in a stopper here. He is more than that. I would say he is an intelligent but physical centre-half. I’ve no worries about his age, either. A lot of players are playing longer because they know how to look after themselves. He is in great shape, so we’re not getting an ageing 34-year old, we are getting a young 34. He is a fantastic signing for us.

A: Possibly, but when you look at the team photo from when we arrived in 2017, the core of those players is still here. I said then, when we started out in the Northern Premier League, we were building a squad we believed could compete in the National League. Here we are now, ready to do that, with so many of the same players. Let’s see if we were right - I think we were, but now it’s time to prove it.

*Look out for interviews with the two new signings later, here on the club's official website.