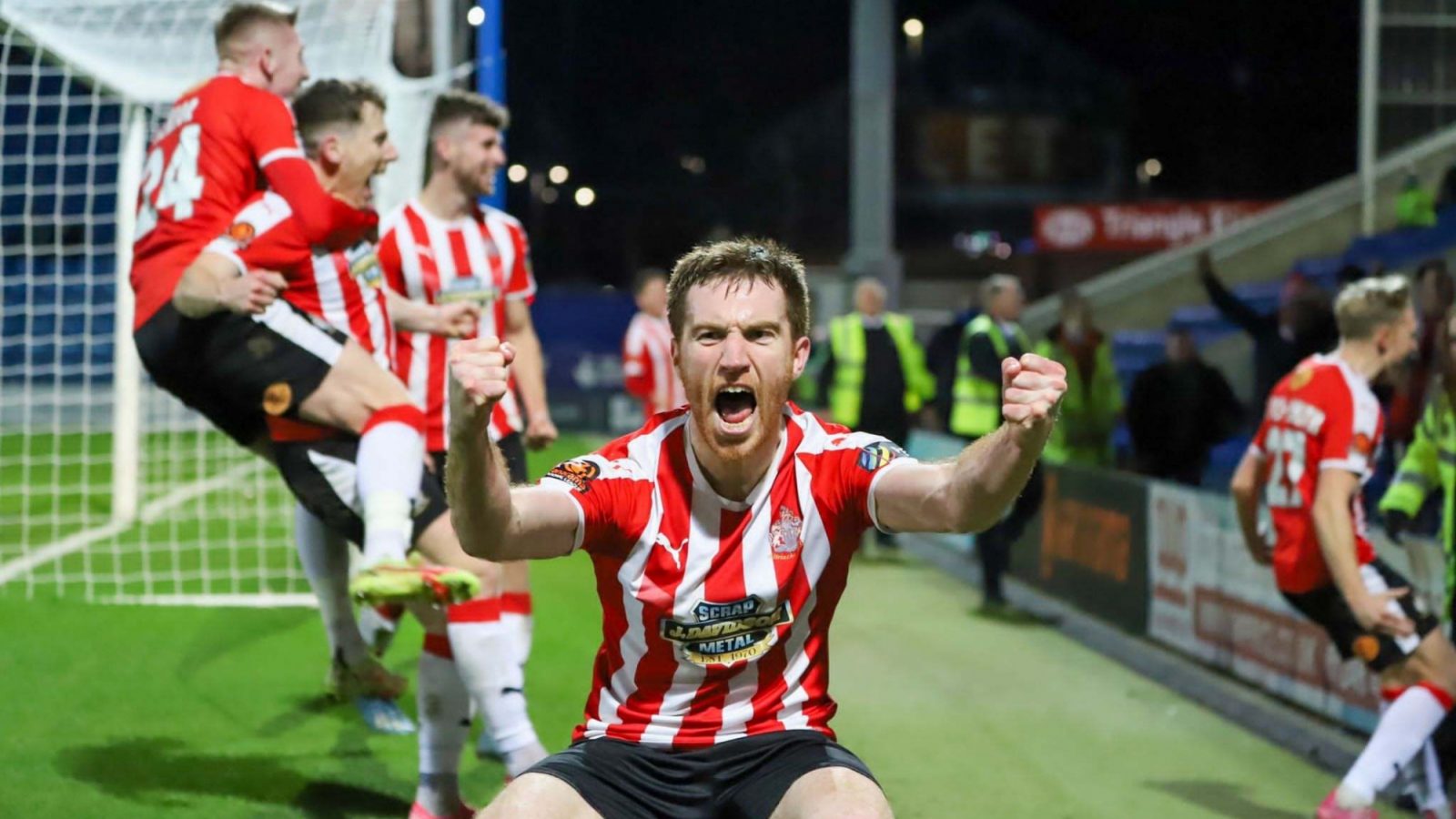 *This is what it means .. the ecstasy of a last-gasp equaliser is brilliantly captured by photographer Jonathan Moore as Tom Hannigan celebrates Altrincham's outstanding comeback at Chesterfield.

And the next table-toppers, please!

It’s turning into something of a jinx, climbing to the top of the Vanarama National League and then finding yourselves up against this remarkable, resolute and resilient, not to mention fluent and free-flowing, Altrincham team.

Admittedly, Grimsby dodged a bullet when they arrived at The J.Davidson Stadium as league leaders and just about survived a sterling two-goal Alty fightback that narrowly failed to overturn 3-0 arrears.

Now it’s Chesterfield’s turn to be living proof that Phil Parkinson’s Robins are no respecters of reputations after a quite remarkable night at the Technique Stadium.

Top of the table and odds-on to stay there, the expensively-assembled Spireites seemed certain to justify their title favourites tag after seeing the time remaining tick down to single figures with their two-goal cushion still intact.

But Matty Kosylo set home nerves jangling with an unerring finish in the 84th minute, and suddenly there was a glimmer of hope in the Alty ranks, a sense that another grandstand finish could yet be on the cards.

When A-Jay Leitch-Smith narrowly failed to convert a Tom Peers cross in the 88th minute, hope began to fade, and when Toby Mullarkey’s effort was palmed away by the keeper in the last of the four added minutes, it all but disappeared.

There was still a stoppage-time injury to Ryan Colclough to be allowed for, though, and in what must be the ultimate accolade to Alty’s indefatigable, never-say-die attitude, they used those precious few extra seconds to force home an equaliser and spark scenes of delirium at the away end and utter despair everywhere else.

When order was finally restored, with the help of a ticking off from the referee for two dug-outs in the grip of contrasting emotions, Chesterfield restarted with an attempt at goal straight from the kick-off that Tony Thompson ushered wide of the right upright with a celebratory forward roll.

And that was it. The final whistle went before the goal-kick could be taken, and Parkinson and his players rushed to the away end to salute what may well be a first even for this groundbreaking Alty side - a point secured in time added on to added time.

Chesterfield stay top, but manager James Rowe may have some repair work to do to confidence and morale after the way Alty turned the game on its head. His players clearly felt they were home and dry, and so did he, judging by the way he turned to the stands and orchestrated a roar from the home crowd that was reaching a crescendo at the very moment Leitch-Smith silenced them with his last-gasp leveller.

What a moment to savour for Parkinson and his assistant Neil Sorvel after the way they have shaped this Alty squad into a match for anyone on their day on a budget that, for all the board’s forward-thinking commercially-savvy enterprise, resembles small change compared to Chesterfield’s.

A measure of luck is needed along the way, of course, but it all seemed to be going the home team’s way in the first half, not least when Liam Mandeville’s 20-yard effort took a deflection and looped over a stranded Thompson into the net in the 10th minute.

Connor Hampson went close to an equaliser three minutes later, after playing a one-two with Kosylo on the left and having a close-range angled shot blocked, and Colclough blasted a short Kosylo free-kick into the wall after keeper Scott Loach was penalised for handling an under-hit back pass from Jamie Grimes in the 19th minute.

Going in one-goal adrift at half-time might not have been the worst of scenarios for Alty, but the deficit became twice as bad in the 43rd minute when Kabongo Tshimanga swung a boot at a Grimes header and did just enough to divert it past Thompson.

After starting with three-centre-backs, Parkinson reverted to a back four at the beginning of the second half, with Mullarkey and Tom Hannigan in the middle and the team as a whole looking more threatening.

Colclough had a shot smothered by the diving Loach after being set up by Hampson in the 53rd minute, and Kosylo finished off a determined run with a shot that was deflected wide for a corner that so nearly yielded an Alty goal two minutes later.

Colclough’s flag-kick sailed beyond the far post, where Danny Whitehead met it with a hooked volley that appeared to be heading for the back of the net, until skipper Curtis Weston popped up to volley it off the line.

Always looking to try something different to catch the opposition on the hop, Parkinson sent on Leitch-Smith in the 69th minute and soon saw it pay dividends.

In the 84th minute, it looked for all the world as though a short corner between Kosylo and Colclough might have been the wrong option, as Alty found themselves forced back towards the halfway line.

But when the ball was played to Leitch-Smith, it was promptly threaded through by the Alty substitute to Kosylo, who steadied himself before drilling a low shot in off the left post from 20 yards.

What a finish by Kosylo, and what a finish it set up to a game that suddenly exploded into life as renewed belief surged through the Alty ranks.

Two minutes from time, substitute Ben Pringle found fellow-sub Peers on the left for a low flicked cross that Loach pounced on just as Leitch-Smith stretched in an attempt to reach it.

An illuminated figure four was being held aloft by the fourth official, just as Colclough tried to retrieve possession at the precise moment a defender's boot made simultaneous contact with the ball and the Alty winger’s left leg, leaving him crumpled in agony.

It is to be hoped the injury doesn’t have long-term repercussions, but there was at least a short-term benefit for Alty as they drew level in the 95th minute, the one added on to allow for the treatment Colclough needed.

Mullarkey powered forward and unleashed a shot that Loach could only parry at full stretch, and, as Alty kept the pressure on, Leitch-Smith swung a boot at the ball and - irony of all ironies after Chesterfield’s opener - it took a deflection to loop beyond Loach’s reach into the back of the net.

Cue celebrations that were repeated at the final whistle a matter of seconds later, and weren’t they deserved for a side who simply don’t know when they’re beaten.