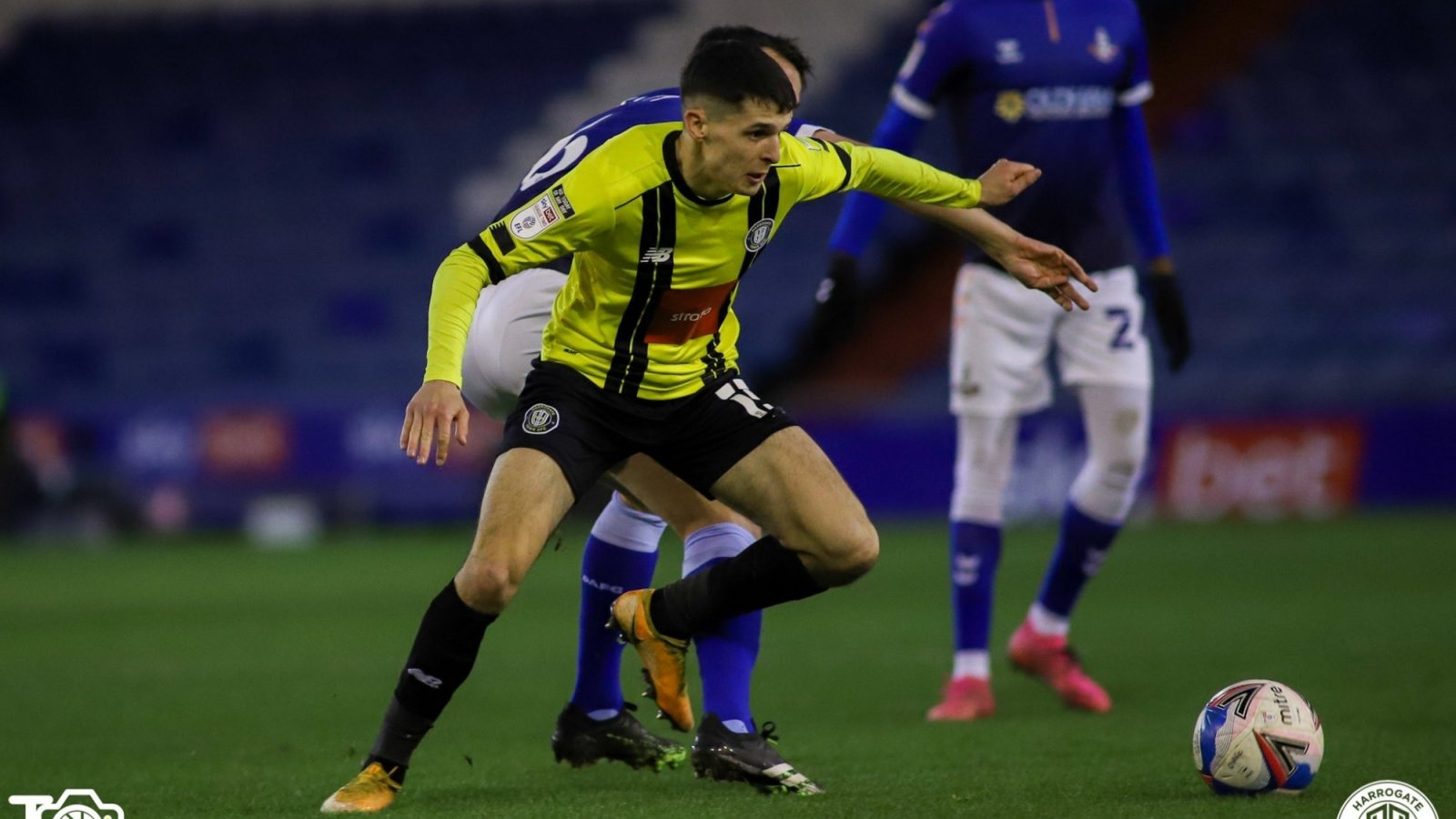 *Action man .. Connor Kirby in the thick of it for his parent club. Picture courtesy of Harrogate Town.

Phil Parkinson has completed a signing he believes can 'kick-start' an upturn in Altrincham's fortunes after landing energetic Harrogate Town midfielder Connor Kirby on loan for the rest of the season.

Though a run of three straight defeats has all but ended the Robins' hopes of a play-off place in the Vanarama National League, Alty boss Parkinson is adamant he will not allow the campaign simply to fizzle out over the remaining month or so.

After detecting signs that standards may be dropping towards the end of Saturday's 4-0 home defeat to Sutton United, he backed his words with deeds by adding Kirby's dynamic approach to his squad for the remaining seven games of the campaign.

Though still only 22, the Barnsley-born midfielder already has an impressive pedigree after playing in the Championship for Sheffield Wednesday and making 34 League Two appearances on loan for Macclesfield Town last season and 16 for Harrogate this season.

Welcoming him to the club and confirming that he is available for selection against Barnet at The J.Davidson Stadium on Saturday, Parkinson said: 'Connor is a really tenacious player who gets round the park well, likes a tackle and can also switch the ball ever so well. That was one of the big appealing qualities about him - he has good legs, in terms of getting up and down the pitch.

'He is a player I have always quite liked, and we are in a position where we can offer him some game time, because we are coming to the end of the season, with not a great deal to play for, and I need to take these opportunities to look at one or two things.

'Connor is not playing at Harrogate, and who know what the future may hold? He might like it here and want to be here, or Harrogate might want to keep him. Either way, it's a win-win situation for everyone involved.

'Certainly, if this is seen as a sign that I'm not prepared to let the season simply peter out, then  I can assure you that is absolutely the case. I don't want to go the rest of the season losing games, that's for sure, and I've also got an eye on next season as well.

'We need to be making some decisions, and the lads who are here need to be fighting to stay here, because if I see a lack of fight - and I felt there was an element of that at 4-0 down in the second half against Sutton - I won't accept it.

'I understand it's hard in those situations, but we put ourselves in a 4-0 position, and I expect us to keep fighting to the very end.

'It went very flat for me, so maybe Connor coming in will give everyone a kick up the backside and a lift. If I'm a player in that changing room, knowing the high standards we set ourselves, I would expect a reaction. Hopefully, he can help kick-start that.'

If Connor is involved against Barnet, you can watch his debut by ordering Alty TV's live stream here.

After featuring prominently for the under-18s and an under-23 side that lifted two trophies, Connor made his senior debut for Sheffield Wednesday in October, 2015, shortly after his 17th birthday and made two first-team appearances for them before becoming Harrogate's first signing as a Football League club last summer.

He was runner-up for the Player-of-the-Year award during his loan spell at Macclesfield last season, and everyone at Altrincham wishes him a happy and successful stay at The J.Davidson Stadium.