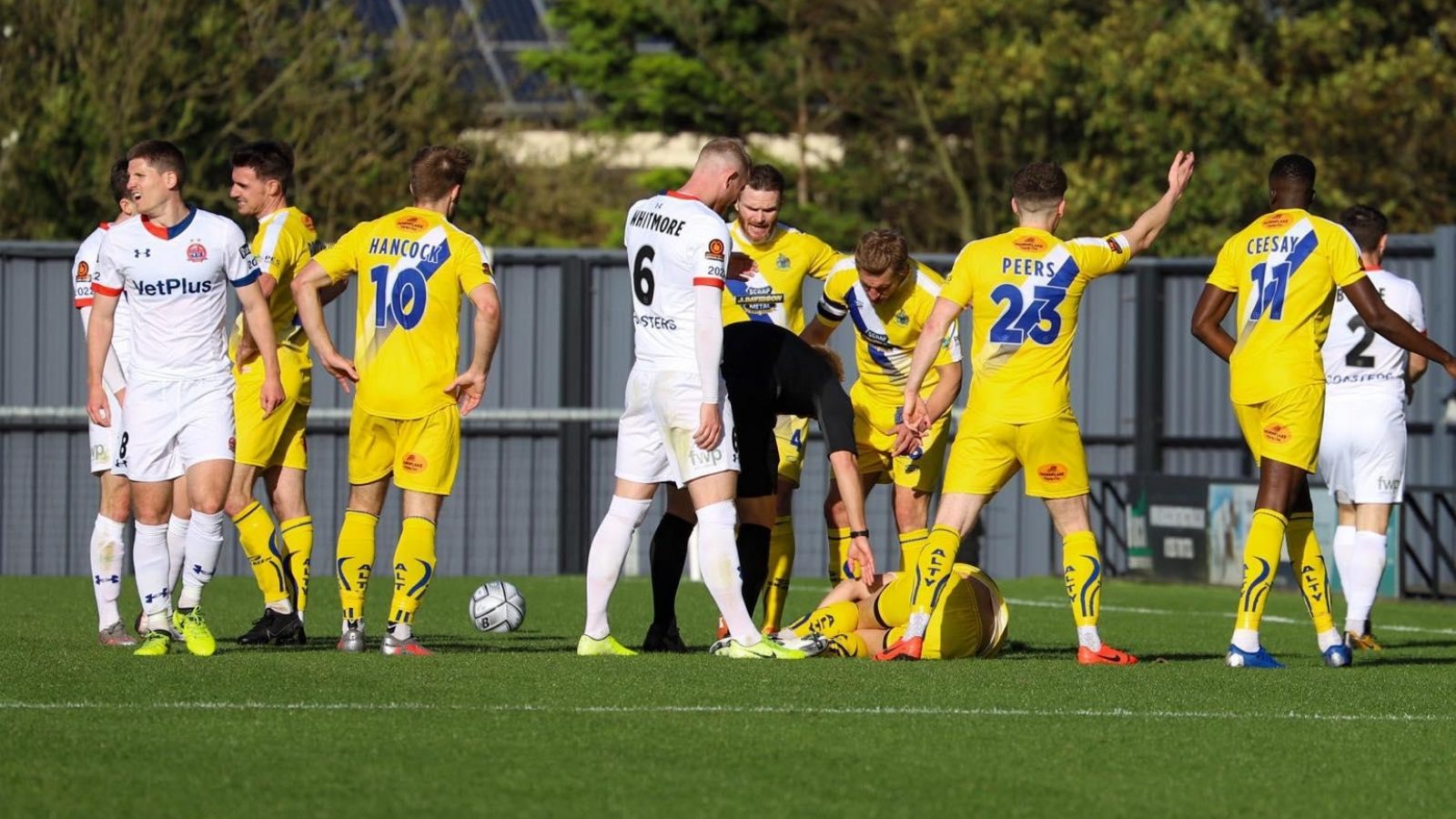 Jordan Hulme has always had a sense of occasion and sense of timing, and they combined to deadly effect to send Altrincham spinning towards a fourth qualifying round defeat in the Emirates FA Cup at Mill Farm.

Still looking for his first goal in AFC Fylde colours, the former Robins favourite chose football's most famous competition and his old club for putting matters right, as the Coasters shaded the tightest of encounters.

Cashing in on a defensive mix-up, Hulme broke the deadlock in the 43rd minute with a close-range finish, realising fears that must have been harboured by every single Alty fan ever since the draw was first made.

The tie looked to have been settled when the home side doubled their lead in the 54th minute, but, to their credit, a spirited Alty forced their way back into it with a superbly-worked goal, finished off by Tom Peers, on the hour.

In bright breezy conditions, one-time Liverpool midfielder Darren Potter was given an instant debut, just a couple of days after signing a short-term deal with the Robins, in a central role alongside skipper Jake Moult.

The wind was clearly going to be a  factor, judging by a couple of early Fylde through balls that were helped on their way by the elements and sailed harmlessly out for a goal-kick.

Even so, both sides wasted no time showing their attacking intent and both were rueing near-misses in a lively opening quarter-of-an-hour.

Alty were first to threaten, courtesy of a misplaced pass across the edge of his own area by Fylde centre-back Alex Whitmore that was quickly seized on by Matty Kosylo and Josh Hancock. It was Hancock who took responsibility for trying to punish the error, but his rising drive had a fraction too much elevation on it and just cleared the bar.

Worryingly for Alty, as mentioned, Hulme went in to the tie still looking to open his account for his new club. What odds that opening deposit would be against his old club?

Not short enough, as soon became apparent, and he looked in the mood to take it out on his former team-mates as early as the fourth minute, with a flash of vintage Hulme trickery that so nearly produced the game’s first goal.

Receiving the ball with his back to goal, the former Alty striker rode a challenge from Toby Mullarkey and brilliantly turned his man to open up space for a shot that smacked against the right-hand post and bounced away to safety.

Alty reacted by forcing a corner that Kosylo played short to Shaun Densmore, who whipped in a cross that cleared everyone on the edge of a crowded six-yard area but found Moult, lurking beyond the far post.

The Alty midfielder’s control earned him a shooting opportunity, but the angle was against him, and  his effort drifted wide of the other post.

Fylde lost skipper Nathan Pond to an injury in the 19th minute and could easily have lost right-back Luke Burke to a red card three minutes later after a scything challenge on Connor Hampson that left the full-back needing treatment.

Referee Mr.Dicicco consulted his nearby linesman and thought long and hard before settling for a yellow card, much to Burke’s relief.

New boy Potter had been growing into the game and showing glimpses of his undoubted  pedigree, not least with an eye-catching turn that completely wrong-footed a close marker near the centre-circle, but he blotted his copybook with a costly lapse in the 43rd minute.

The danger looked to have passed after livewire frontrunner Nick Haughton received a pass from Luke Burgess and drove a shot inches wide, with Tony Thompson at full stretch.

But when Thompson rolled the resulting goal-kick towards Potter on the edge of the area, the vastly-experienced midfielder appeared to be caught unawares and quickly found himself under pressure.

As the ball squirmed free, Hulme pounced on it and, with only Thompson to beat, made no mistake with an unerring finish into the bottom corner.

It was tough on Alty after a wholly-committed first-half performance, and they may well have felt aggrieved after doing more than enough to have gone in on level terms.

There was no sign of feeling sorry for themselves, though, as they started the second half brightly and carved out the first opening, a couple of minutes in, Moult meeting Kosylo’s deep free-kick with a first-time sidefoot volley that cleared the bar.

The last thing Alty could afford to do was slip further behind, but that’s the fate that befell them in the 54th minute.

Right-back Burke didn’t appear to have anyone in mind when he clipped a ball forward with his left foot, but it fell obligingly for Ben Tollitt to latch on to and fire past Thompson.

It needed a swift response from Alty, and they duly came up with one, as Kosylo began to make his mark against his old club.

A weaving run by the little winger took him past one challenge after another into the Fylde area, and when his eventual shot bobbled narrowly wide, claims he had been clipped as he raised his boot to execute it fell on deaf ears.

Alty kept the pressure on, and when more great play from Kosylo on the hour gave Hampson the chance to get to the bye-line and cross low, Peers was on hand to convert at the near post and reduce the arrears.

Phil Parkinson's side were giving it everything, in their quest for an equaliser and penalties, though Fylde were proving a tough nut to crack.

Moult tested Chris Neal from distance in the 75th minute, after good approach work from Densmore and Hancock, and Alty threatened again soon after with a Hancock free-kick that was safely fielded by the Fylde keeper.

So it went on, right into five minutes of added time, but it wasn’t to be for Alty, as a second goal - and possible route into the first round proper - eluded them on what was still an encouraging return to action after their Covid-enforced lay-off.