Dover sunk by Alty subs! Changes do the trick for red-hot Robins 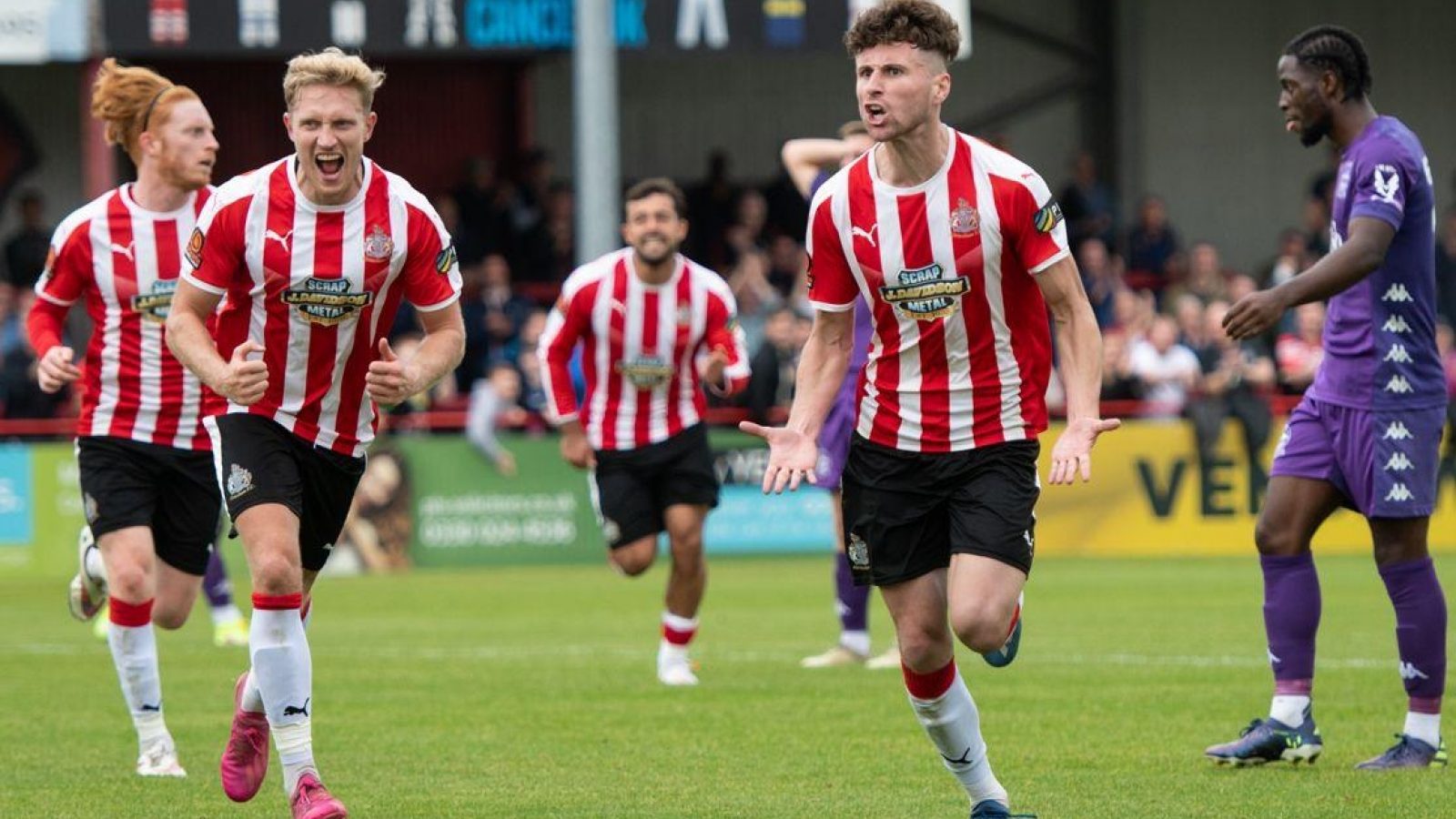 The long-awaited return to something approaching normality was perfectly encapsulated at Moss Lane on Saturday - a bumper crowd packed shoulder-to-shoulder inside The J.Davidson Stadium and a grandstand finish capped by a dramatic late winning goal.

It was like the good old days, a throwback to pre-Covid times, with Alty fans filling three sides of the ground and the players responding to the vibrant atmosphere they created with some dazzling approach play and clinical finishing.

And, of course, it wouldn’t be Alty without a bit of pure theatre thrown in for good measure, this time provided by Ryan Colclough, who, with time running out, picked himself up from being dumped on the turf and steadied himself for a second or two before drilling an unerring penalty into the bottom corner to seal a richly-deserved 3-2 win.

How these moments have been missed by football fans in general during lockdown and how Alty fans, in particular, lapped it up on Saturday afternoon as the Robins twice came from behind against a spirited Dover Athletic side before snatching the points with four minutes plus added time remaining.

Manager Phil Parkinson could hardly have wished for a better start to Alty’s programme of home matches, and much of the credit must go to his intervention midway through the second half, when the introduction of substitutes A-Jay Leitch-Smith, in the 66th minute, and Ben Pringle, just two minutes later, sparked the late surge towards a second win from three games so far.

Pringle’s industry and dynamic running kept Parkinson’s side pouring forward in search of an equaliser, at 2-1 down, while Leitch-Smith provided it with an expertly-taken first goal in Alty colours, prior to Colclough holding his nerve with an ice-cool spot-kick winner that raised the roof at the Gold Road end.

An immaculate new playing surface proved every bit as conducive to Alty’s smooth passing style as everyone expected, though Dover served early warning they would be no pushovers, despite a 12-point penalty and losing start to the campaign appearing to make their plight insurmountable at the foot of the table.

Ricky Miller fired narrowly wide from the edge of the area in the fifth minute, and Dover were in front three minutes later when Aaron Cosgrave set up Koby Arthur for a left-foot finish past Tony Thompson.

Colclough responded by brilliantly weaving between two markers on the left and cutting across the edge of the area before finally finding space for a shot that went fractionally wide.

It could have been 2-0 to the visitors in the 19th minute and surely would have been but for Brad Jackson instinctively sticking out a boot to block a close-range Cosgrave effort that was clearly heading for the Alty net.

It was an outstanding piece of anticipation by summer signing Jackson, who slotted in seamlessly at right-back and augmented his defensive duties with some bright attacking play that frequently troubled the Dover defence.

Joel Senior provided the assist, cutting in from the left and rolling the ball towards Mooney, who made light of being at right angles to the Dover goal. It meant an instant shot had to be executed with perfect timing, and Mooney did just that with a first-time left-foot effort that fairly flew into the bottom corner.

Connor Kirby fired over in the 29th minute, after Mooney controlled a Colclough cross beyond the far post and teed him up, and Marcus Dinanga was denied by an excellent save after Jackson’s right-wing cross caused more uncertainty in Dover’s defence a minute later.

The Dover threat could never be discounted, for all Alty’s impressive approach work, and it took an exceptional reflex save by Thompson from a close-range header to prevent the visitors taking the lead again following a 37th-minute corner.

That lead was subsequently restored when, out of the blue and against the run of play, Cosgrave took aim in the 57th minute and unleashed an unstoppable shot into the top corner.

It was a hammer blow that could have knocked the stuffing out of Alty, but Parkinson was determined nothing would spoil the script on a pitch specially designed for accumulating home wins.

So it proved, as the Alty boss sent on Leitch-Smith and Pringle in quick succession to pep up his side’s attacking endeavours and saw it reap the rewards he was hoping for.

With Pringle driving the team on in the middle of the park, Alty were back on terms in the 71st minute, as Leitch-Smith followed a piece of admirable control at the far post with an assured finish to make it 2-2.

With time ticking away and the Golf Road in full voice, a dramatic last-gasp winner surely beckoned. We’ve seen it before and we saw it again, as Colclough burst into the area on the left and had his legs taken from under him by a despairing lunge by defender Danny Collinge.

All eyes on the referee, Scott Simpson. Twice, previously, Dinanga and Senior had looked imploringly towards him without success after being upended in the area, but there was only one decision he could make this time - penalty to Alty and a yellow card for Collinge.

Step forward, Colclough, impervious to the pressure of a rammed Golf Road holding its collective breath and Alty's patchy record from the penalty spot, to say the least, over the years.

As the Alty winger advanced a few paces and swung his right boot through the ball, Dover keeper Josh Bexon guessed correctly and flung himself full length, but to no avail. It was already past him, nestling in the corner of the net, and the points were in the bag.

What a start to the home campaign from a squad that looks to have enough strength in depth to allow Alty boss Parky to bring on genuine quality whenever he feels it is needed. There will be sterner tests ahead, no doubt, but 1800-plus Alty fans headed home happy after those timely second-half changes reinvigorated the Robins and added another successful outcome to the lengthy list of Moss Lane cliffhangers.