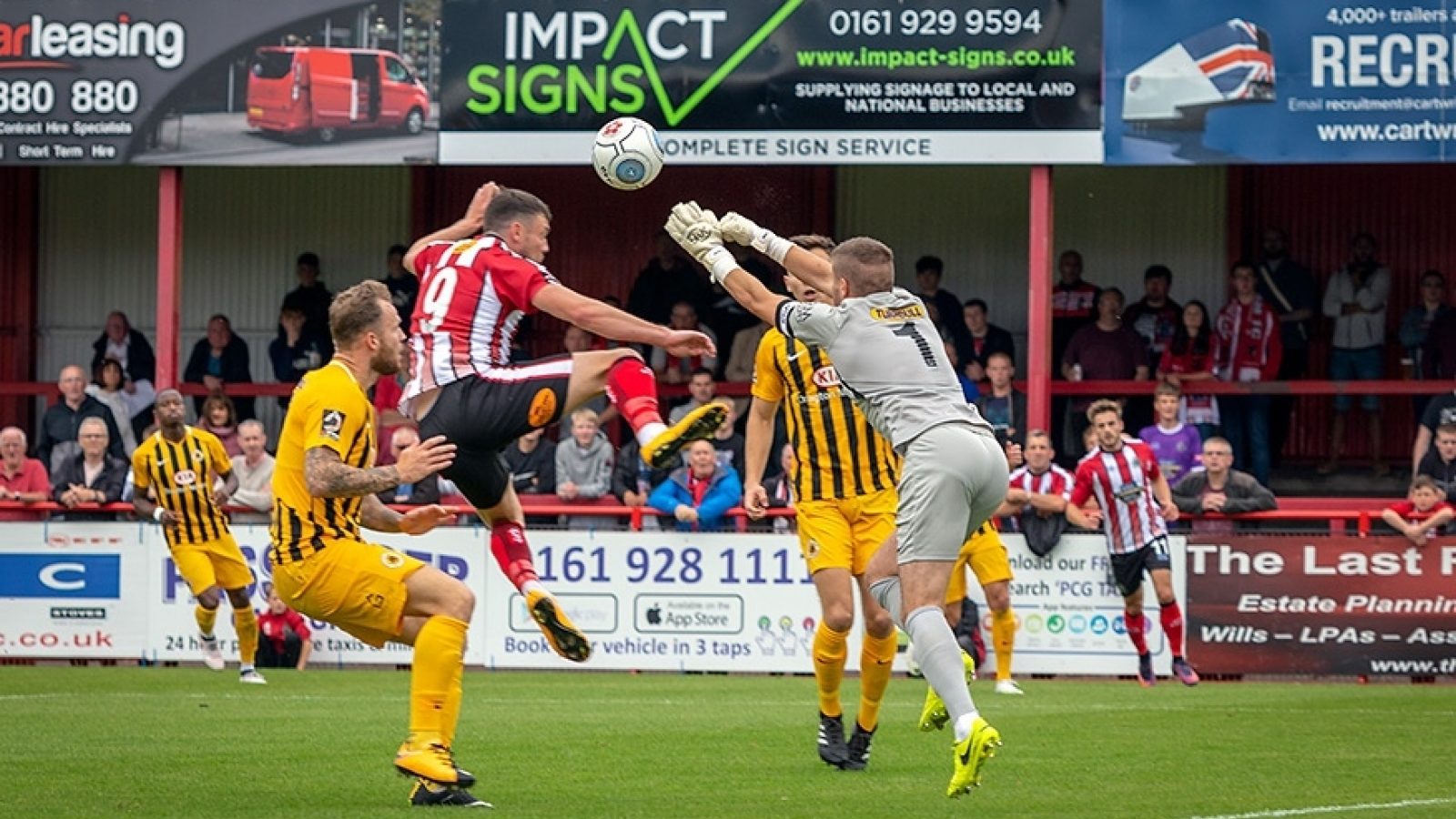 A disappointing result and equally disappointing performance condemned Altrincham to a second home defeat in five days at The J.Davidson Stadium on Saturday.

After counting themselves distinctly unfortunate not to take maximum points from a three-game opening spell that yielded a win and two draws, it will be a matter of concern for manager Phil Parkinson that his side have now faltered twice in quick succession.

On Tuesday night, it was a case of surrendering the advantage, as FC United of Manchester fought  back from a Jordan Hulme goal to edge it 2-1, but against Boston United on Saturday, a breakthrough seldom looked like materialising, as a lacklustre Alty succumbed to a 2-0 scoreline.

Parkinson made a handful of changes to the midweek starting line-up, with Andy White, Liam Goulding, Simon Richman and Josh Hancock coming in at the expense of Shaun Densmore, Ben Harrison, who had an outing for the Reserves to build up his match fitness, Sean Williams and Brendon Daniels.

For all the patient probing by both sides, neither could find a way through in a cagey first half bereft of clear-cut scoring opportunities. Boston did hit the post shortly before half-time, but even that was down to a moment of individual brilliance, rather than Alty being opened up by a passage of incisive passing.

There seemed to be little on for Nicky Walker when the ball was headed towards him by a team-mate nearly 25 yards out, yet the Boston forward unleashed a first-time left-foot volley that flew beyond Tony Thompson but smacked against the Alty keeper's right-hand post and bounced to safety.

It was an eye-catching effort that came completely out of the blue, and Alty’s players heaved a collective sigh of relief as they made their way off shortly after.

Any sense of having been reprieved did not last long, however, as Boston deservedly went ahead in the 49th minute. Losing possession in dangerous areas near their own goal had almost cost Alty dear on two occasions in the first half, Adam Marriott failing to capitalise both times, but there was no escape when it happened again.

A wayward pass put Tom Hannigan under needless pressure, and when his hurried clearance struck a Boston player, it fell for Andi Thanoj to set up Marriott for a crisp finish into the bottom corner.

In an attempt to inject some urgency, Parkinson made an attacking change by sending on Daniels for Max Harrop, and the on-loan left-sided player added a different dimension to Alty’s play.

An impressive piece of close control by Daniels drew a foul and earned a free-kick that, in a central position just outside the area, looked tailor-made for him. He struck it well enough with a left-foot effort that unfortunately caught the top of a wall which had edged notably closer to the ball by the time it was taken.

Desperate to find a way of rousing Alty into action in their quest for an equaliser, Parkinson sent on Williams for Connor Hampson, whose right hand was heavily bandaged after he fell awkwardly, and Tom Peers for John Johnston.

Again, it was Daniels who threatened with his left foot, as Alty finally worked themselves a clear opening late on. A passing move on the right ended with Josh Hancock carefully and precisely rolling the ball back to Daniels, who frustratingly dragged his shot a yard wide from the edge of the area.

When Peers just failed to get a decisive touch to a left-wing cross ahead of a covering defender, time was running out for Alty, and their fate was sealed in the 88th minute, when Nathan Arnold latched on to a pass from substitute Craig Westcarr and finished unerringly from near the left corner of the six-yard box.

It was no more than in-form Boston deserved, but Alty must regroup ahead of a Bank Holiday double-header away to Darlington next Saturday and home to Guiseley 48 hours later, with Parkinson vowing to make the most of a fixture-free week in the meantime and work diligently in training on Tuesday and Thursday to eradicate the causes of two unexpected setbacks.