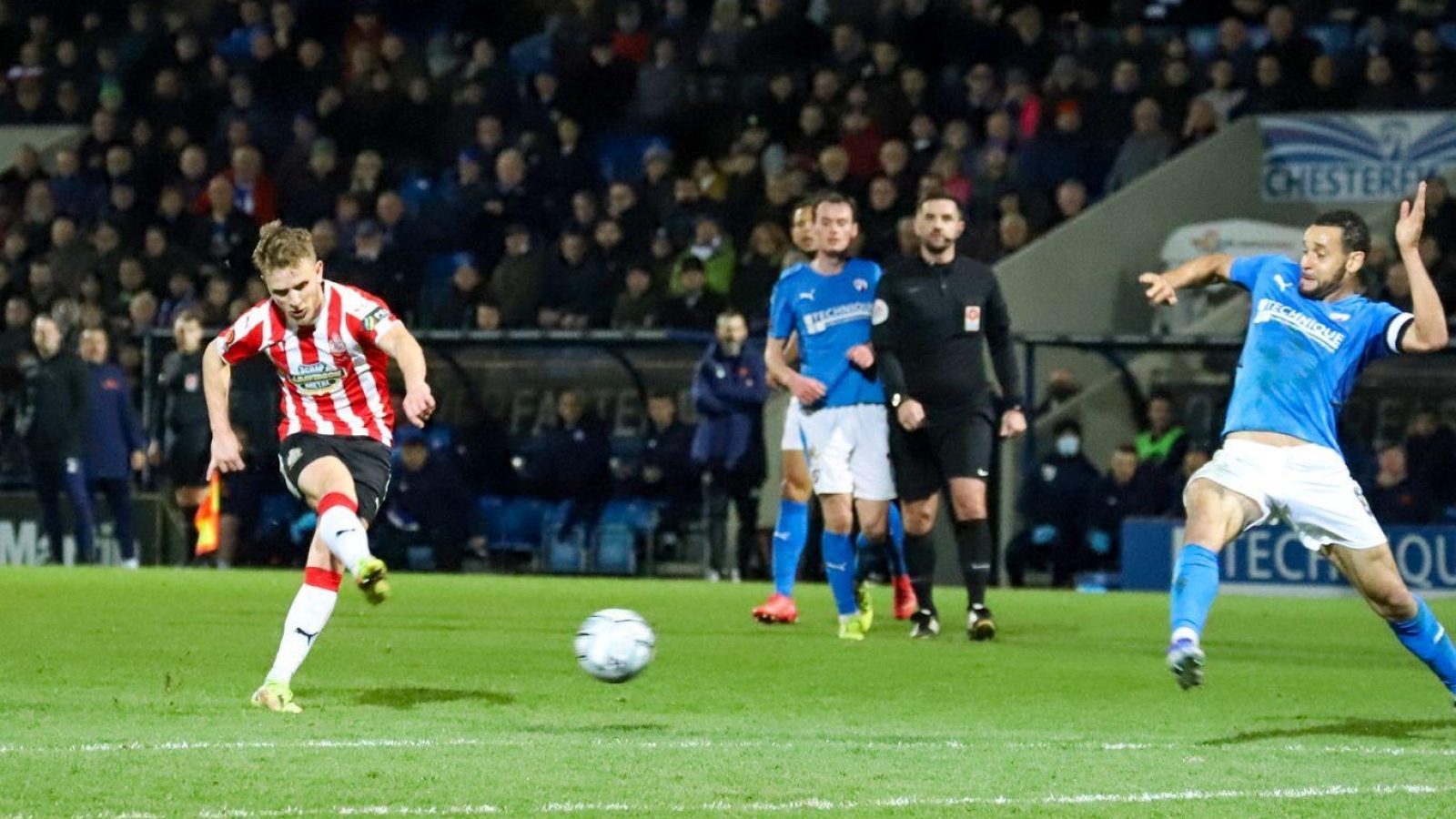 *The comeback's on .. Matty Kosylo fires home to make it 2-1 at Chesterfield - and we all know what happened next! Picture by Jonathan Moore.

Altrincham will be aiming to extend their unbeaten run in the league to four games on Saturday as they welcome struggling Southend United to The J. Davidson Stadium.

After a difficult run of form, Phil Parkinson’s side have been impressive in recent weeks, holding promotion-chasing Boreham Wood to a 1-1 draw before thumping 10-man Weymouth 4-1 at the Bob Lucas Stadium.

Most recently, against Chesterfield on Tuesday evening, the Robins knew it was going to be a tough ask to get anything out of a game against a side with title aspirations.

However, this Altrincham side do not know when they are beaten, and, despite being two goals down with six minutes left to play, goals from Matty Kosylo and A-Jay Leitch-Smith earned them a share of the spoils.

The hosts opened the scoring in the 10th minute through Liam Mandeville, with the ball falling to the 24-year-old in the area before his deflected strike looped over Tony Thompson.

The Spireites doubled their advantage just before half-time through Kabongo Tshimanga, as he finished off a Jamie Grimes header following a corner.

Alty set the game up for a grandstand finish in the 84th minute when Kosylo drilled a low shot in off the left post from 20 yards.

And deep into stoppage time, Leitch-Smith found space to fire an effort at goal, with a slight deflection taking the ball beyond the reach of Scott Loach and into the net.

Following that result, the Robins remain 11th in the Vanarama National League table, five points behind Solihull Moors in the final play-off place, having played one less game than the Moors.

Saturday’s match promises to create history as it will be the first time Altrincham and Southend United have faced one another.

After back-to-back relegations, which saw the club drop out of the Football League after a 101-year stay, Southend United were expected to be up there competing for a play-off place at the very least. However, after a nightmare start to the season, they soon found themselves right in the thick of a relegation battle.

Founded in 1906 and based at Roots Hall, with a brand-new stadium currently in the works, Saturday’s visitors were once members of the Championship, competing alongside the likes of Stoke City, Leeds United and Ipswich Town. However, years of struggle on and off the pitch finally cost them their place in the Football League, finishing 23rd out of 24 at the end of the 2020/21 League Two season.

There have been a few glimpses of what they can do this season, beating the likes of Eastleigh, Dover Athletic and King’s Lynn Town while securing impressive draws against Wrexham and Wealdstone. However, having scored only 11 goals so far this season, it is easy to see why they are languishing near the bottom of the league.

The Shrimpers have played 15 games, winning three, drawing two and losing 10, scoring 11 (the lowest total in the National League) and conceding 24 for a goal difference of -13.

Despite their struggles, they do have a side packed full of players who know how to play at this level. Experienced striker Rhys Murphy (formerly of Yeovil Town) currently leads the line, and with Sam Dalby (formerly of Woking) alongside him, they have two attackers who have shown they can find the back of the net.

They also have the likes of Jack Bridge, Simeon Akinola, Abu Ogogo, Josh Coulson, Nathan Ferguson and Steve Arnold to call upon. However, time will tell as to whether their experience can help the club improve upon their current position.

In their last game, against Grimsby Town, the other side to be relegated from the Football League last season, Ryan Taylor's early goal proved enough for the Mariners to secure a narrow 1-0 win at Blundell Park.

Taylor's precise third-minute finish from Erico Sousa's lay-off gave the hosts the perfect start, as Southend struggled to settle into the game.

Paul Hurst's side could have added to Taylor's early strike with the impressive Sousa having a shot blocked before Harry Clifton also came close.

The visitors had chances of their own to get something from this game, with Sheffield United loanee Zak Brunt missing a glorious chance when he fired over the bar with the goal at his mercy.

But it wasn’t to be for the Shrimpers, who suffered their third straight loss in all competitions.

The Shrimpers are led by club legend and former team captain Kevin Maher, who took charge at Roots Hall a month ago on October 20. The English-born coach, who represented the Republic of Ireland as a youth international, replaced former manager Phil Brown.

Having made almost 400 appearances for the Shrimpers during the decade he spent as a player at Roots Hall, the former midfielder has been set the daunting task of turning the ship around at a club desperate to avoid the unwanted record of three successive relegations.

Maher got his first taste of coaching with National League South side Chelmsford City, having been appointed head coach in June, 2014. Just over a year later, he departed the Clarets to take a coaching role with Southend United’s Under-21 side, eventually becoming the U-21 manager before returning to Chelmsford as a caretaker following the sacking of Rod Stringer.

After four seasons with Southend's U-23s, the 45-year-old joined Bristol Rovers in July, 2019 as a first team coach, working under multiple first team managers, including Graham Coughlan, Joe Dunne, Ben Garner and Joey Barton. It was in his time at the Memorial Ground that the current Blues boss developed a reputation as a talented young coach, impressing many in what was a topsy-turvy period for the Pirates.

However, when Phil Brown left Southend after a dismal start to the current National League season, Maher made the decision to return to his former club, and, alongside his coaching team of Darren Currie, Mark Bentley and John Still, he will hope that he can play a part in bringing the glory days back to Roots Hall.

As a player, Maher began his career as a trainee with Tottenham Hotspur, but, without making a single first team appearance, he was released. He subsequently joined up with Southend United in 1998, and 10 successful seasons with the Shrimpers were to follow, including winning promotion to the Championship as well as captaining the Blues to a famous win against Manchester United in the League Cup.

In 2008, he left Roots Hall to join Oldham Athletic, before signing with Gillingham after only one season at Boundary Park. Relatively short spells with Dagenham & Redbridge, Bray Wanderers, Whitehawk and Chelmsford City were to follow before he called an end to his playing career.

A win for Altrincham this weekend could lift them to ninth in the table, above Dagenham & Redbridge and Stockport County. However, a win for Southend could see them climb as high as 19th, above Aldershot Town and Maidenhead United.

Alty manager Phil Parkinson spoke with Brian Flynn and John Edwards after our 2-2 draw with Chesterfield. You can check out what he had to say by following the link below.

Southend United manager Kevin Maher spoke ahead of this weekend’s game at The J. Davidson Stadium. You can check out what he had to say by following the link below.

Not coming to The J. Davidson Stadium on Saturday afternoon? You can still follow the game via the following ways.