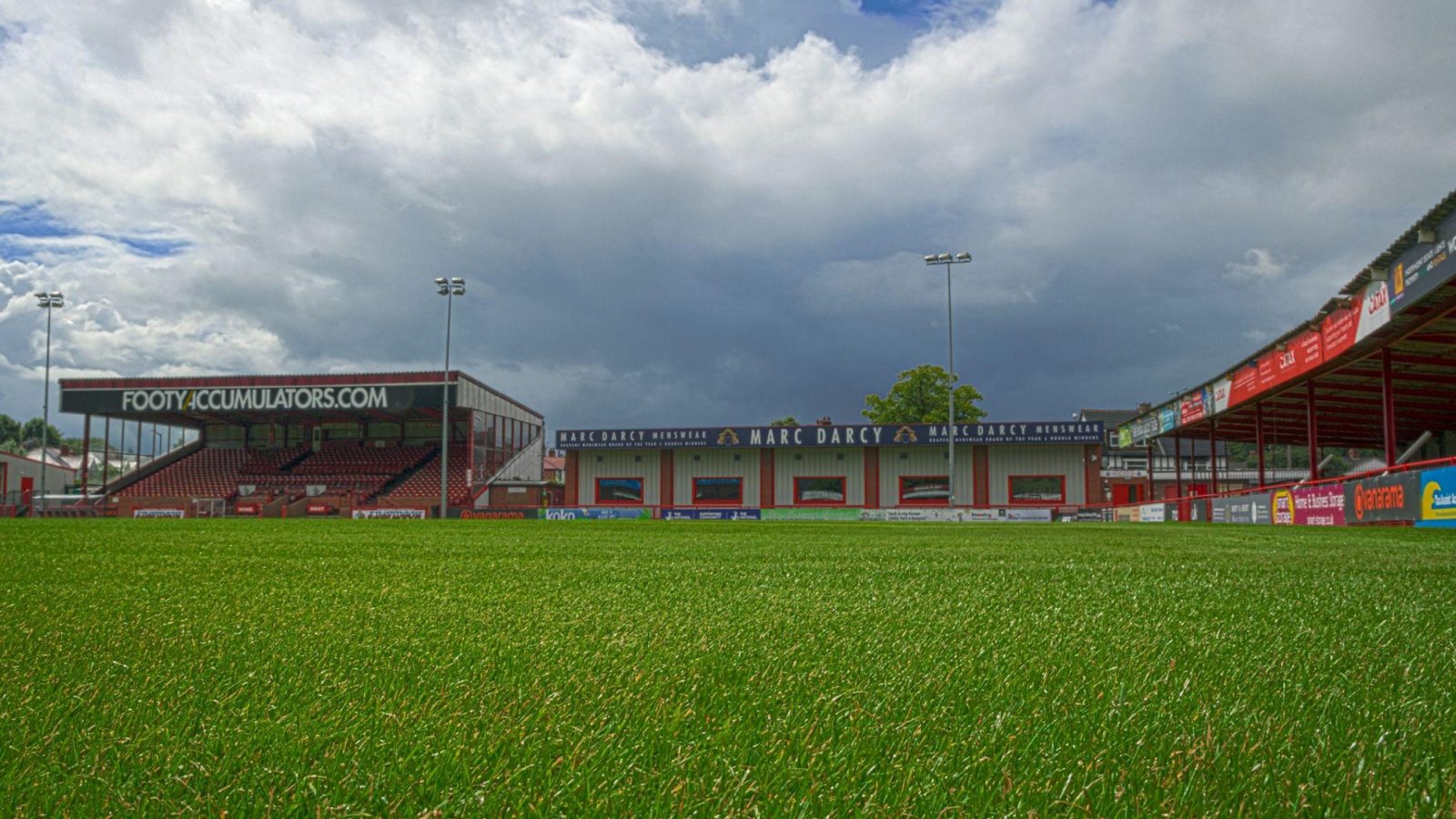 The Robins will aim to complete their first league double of the season on Saturday when Torquay United journey north to The J. Davidson Stadium.

Following late frustration at Barnet, with Alty forced to settle for a point when all three seemed to be on the cards, the Robins were dealt a blow against Grimsby Town when two spectacular goals condemned them to defeat.

Ben Fox and Luke Waterfall came close for the Mariners in the first half as they chased a maiden win in 2022, but they were largely subdued in the opening 45 minutes by a stubborn visiting defence.

But within two minutes of the restart, Grimsby hit the front courtesy of a magnificent volley from John McAtee after a corner was cleared to the edge of the box, leaving Tony Thompson with no chance.

The Altrincham goalkeeper produced a point-blank save to keep out another effort from Grimsby's top-scorer this season but Jordan Maguire-Drew's curling effort seven minutes from time secured the spoils for the hosts.

Following that result, the Robins remain 16th in the Vanarama National League table, five points behind Torquay in 12th, having played one more game than the Gulls.

This will be the second meeting between the sides this season, with Altrincham and Torquay facing one another on the opening day.

In that game, Altrincham began their campaign in style with an away win as the Gulls showed signs of a play-off final hangover from last season.

The Gulls still appeared to be feeling sorry for themselves as Altrincham took a two-goal lead inside 19 minutes. Marcus Dinanga fired the visitors ahead after 14 minutes and loan signing Connor Kirby quickly doubled the lead after superb work from Joel Senior.

Tom Hannigan put through his own net after 74 minutes to give Torquay hope, but a superb strike from defender Toby Mullarkey six minutes from time settled Altrincham nerves.

A side that came within a whisker of securing a long-awaited return to the Football League, losing to Hartlepool United in last season’s play-off final, Torquay United will have their eyes firmly set on going one better this time around.

However, after a tricky start to the season, supporters were left scratching their heads as to what was going wrong. Thankfully, since the turn of the year, form has improved as the Gulls look to play catch-up on their promotion rivals.

If they are to climb back into the play-offs and potentially go one better than they did last season, they will have to do so without a number of key players, all of whom departed the club during the summer.

With the likes of Lucas Covolan, Billy Waters, Kyle Cameron, Ben Whitfield and Aaron Nemane all pursuing opportunities away from Plainmoor, a certain amount of weight was placed upon the shoulders of those who remained.

However, the form of midfielder Armani Little has really caught the eye, with the former Southampton Academy graduate bagging 10 goals in all competitions so far this season, more than twice as many as the next highest scorer at Plainmoor (Connor Lemonheigh-Evans with four).

In their last match against Dagenham & Redbridge, the Gulls surrendered a two-goal lead to draw 2-2 at Plainmoor.

The Gulls surged ahead with a pair of goals in the opening 12 minutes before Dagenham scored once in each half to share the spoils.

Torquay opened the scoring in the first minute when Asa Hall headed past Elliot Justham, and they then doubled their lead when Danny Wright found the net.

The Daggers pulled one back on the half-hour mark through former Barnet striker Josh Walker, who turned the ball home from a corner.

Dagenham had several chances to level, with Junior Morias having his shot well saved by Shaun MacDonald before the Gulls’ ‘keeper kept Mo Sagaf's effort out.

Angelo Balanta then found the eventual equaliser for the visitors in the 71st minute with a curling shot into the top corner.

Torquay United are managed by Gary Johnson, an experienced coach who was appointed in September 2018, filling the void left by Gary Owers.

Throughout the course of his career, Johnson has coached 10 clubs, including spells at Yeovil Town, Bristol City and Cheltenham Town, the latter of which he led to the National League title.

Gary began his coaching career back in 1986 with Newmarket Town, a team he once lined up for as a player. A two-year spell with the Jockeys ended when he became the reserves manager at Cambridge United, before progressing to become first-team manager with the club.

In 1999, the Gulls boss surprised many by dipping his toe into the waters of international management, taking over as boss of Latvia, before returning to the UK two years later with Yeovil Town.

After helping the Glovers to successive promotions, he became the manager of Bristol City in 2005, enjoying a five-year spell at Ashton Gate and helping the Robins to a place in the Championship.

Following short spells with Peterborough United and Northampton Town, Johnson returned to Huish Park in 2012, leading the club to the Championship after beating Brentford in the League One play-off final at Wembley.

His trophy-winning record did not end at Huish Park as, in 2017, two years after taking over at Whaddon Road, he led Cheltenham to the National League title, finishing 12 points ahead of second-placed Forest Green Rovers. He was let go by the Robins in 2018 and subsequently signed on at Plainmoor.

A win for Altrincham on Saturday could see the Robins climb above Barnet and Woking into 14th, ending a difficult run of results in the process. However, were Torquay to win at The J. Davidson Stadium, they could close to within two points of Solihull Moors in 10th.

You can buy your match tickets by following the link below.

You can listen to live commentary on Radio Robins, sponsored by Ashley Mowers Garden machinery,