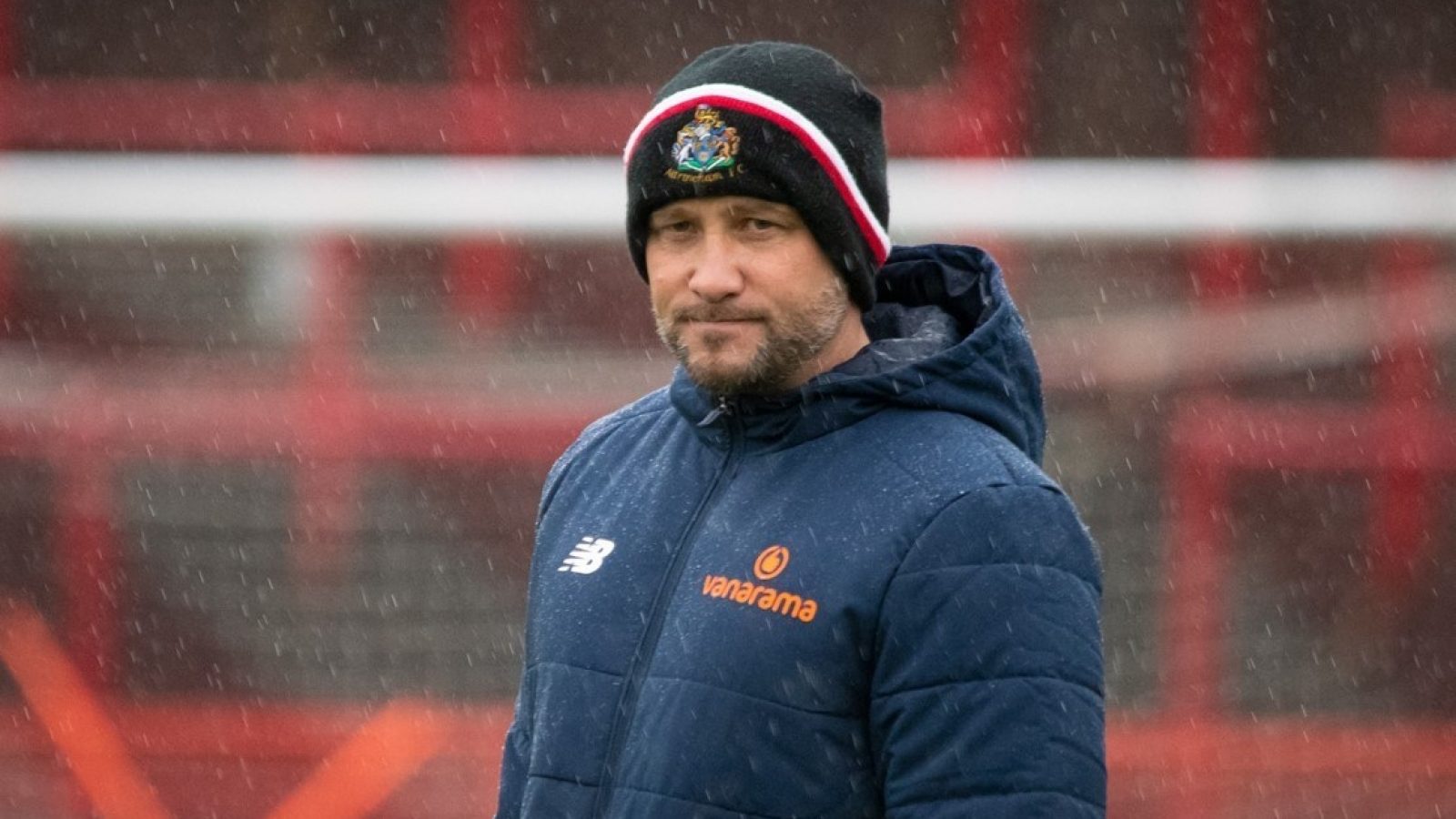 *Wey to go .. Phil Parkinson, pictured here against Weymouth at home last season, will be looking for his side to rediscover their winning touch down in Dorset.

The Robins will be looking for their first league win in over a month this weekend as they make the long journey south to face Weymouth at the Bob Lucas Stadium.

After an impressive display against Boreham Wood, resulting in a 1-1 draw against a side that were top of the league at the time, the Robins were brought right back down to earth as Vanarama National League North side Gateshead knocked them out of the Emirates FA Cup.

The visitors started strongly and scored the opening goal of the game after 21 minutes when Heed top scorer Macaulay Langstaff volleyed home from Matty Jacob's knockdown.

Alty were given an opportunity to go into the half-time break level following a poor clearance by Jacob Chapman, one which left the Gateshead ‘keeper stranded, with the ball passed into an empty net by midfielder Josh Hancock.

The Robins’ midfielder went off with a knock after the break, and, two minutes later, Gateshead regained the lead when Dan Ward took a touch just outside the box before burying a powerful shot into the corner.

It looked like that might be enough for Gateshead but substitute Dan Mooney, returning from a spell on the sidelines, scored with a left foot shot as the game approached the final 10 minutes.

However, with extra time looming, Langstaff added his second goal of the game in the first minute of stoppage time with a curled shot into the top corner, securing the Heed a home tie against Charlton Athletic in the second round.

This will be the first meeting between the sides this season, with Alty and the Terras last facing one another earlier this year on May 15th at the Bob Lucas Stadium.

On that occasion, two goals from Andrew Dallas, either side of a Ryan Colclough strike, secured a 2-1 win for Weymouth, leaving Alty without a win in seven games.

The hosts created several chances early on and were rewarded for their pressure when they took the lead in the 22nd minute through Dallas, who fired past Tony Thompson.

Altrincham pulled themselves level five minutes into the second half when Colclough found the back of the net from the edge of the area with a shot that left home ‘keeper Ethan Ross with little chance.

Phil Parkinson’s side could have had a second minutes later, but the Weymouth shot-stopper was on hand to keep out Connor Kirby's effort with a fine save.

The Terras regained the lead in the 78th minute, with Dallas getting his second of the game shortly after Jake McCarthy had headed against the crossbar. Brennan Camp then made a vital clearance late on to keep Weymouth's lead intact.

Securing promotion to the National League South at the end of the 2018/19 season, not many expected Weymouth to be challenging for honours at the next level up.

However, under the management of Mark Molesley, they went about proving their doubters wrong, finishing third and qualifying for a play-off place. After beating a strong Dorking Wanderers side in the semi-final, Weymouth overcame Dartford in the final, with the game decided on a penalty shoot-out, to book their place in the National League.

In their first season at this level since the 2008/09 campaign, Weymouth found things tough and had to fight to climb away from the bottom three. However, with the threat of relegation removed following the cancellation of football below the NL, the Terras were given the opportunity to put the building blocks in place for a run at consolidating their place at this level.

Despite some impressive results earlier in the season, most notably beating Solihull Moors at Damson Park before earning a 1-1 draw against Notts County, their league position has not improved much on last year, with the club still in 18th place, where they finished last season, after 15 games.

However, their form in recent weeks has shown some signs of improvement as the Terras secured back-to-back wins against Aldershot Town and King’s Lynn Town. Despite losing 4-0 in their most recent outing against Chesterfield, Terras’ supporters will be confident their side have what it takes to achieve survival this season.

In their last match against Chesterfield, Kabongo Tshimanga hit a hat-trick as James Rowe’s side soared to the top of the National League following a 4-0 win at the Technique Stadium.

Coming into the game off the back of two straight wins, the visitors' hopes were effectively dashed when Ollie Harfield was sent off for handball in the 23rd minute, with Tshimanga converting the resulting penalty.

Tshimanga doubled his side's lead on the stroke of half-time and completed his hat-trick with his 16th goal of the season on the hour mark, continuing what has been an incredible season for the former Boreham Wood striker.

Capping things off with a quarter of the game to go, former Maidstone United and Dagenham & Redbridge midfielder Saido Khan completed the scoring with an unstoppable strike.

With over 530 club appearances to his name, Stock has proved to have the knowledge, experience and connections needed to strengthen his side and develop them over a period of time.

Taking the Weymouth job was his first step into management, but with Louis Langdown as his assistant, a man with coaching experience in the Premier League, Championship and Leagues One and Two, he has had all the support needed to succeed.

As a player, Stock started out with Bournemouth in 2000, progressing through the academy to feature for the first team 145 times, scoring 16 goals along the way. After a short stint with Preston North End in 2006, he made the switch to Deepdale permanent in the summer.

After a move to Doncaster Rovers, Stock became a vital part of the team and a firm fan favourite, captaining the side that beat Leeds United in the League One play-off final at Wembley in 2008. Having led Donny to the Championship, his form earned him a move to Burnley in 2012, but despite playing frequently, he was never a first-team regular and departed Turf Moor at the end of his contract.

He dropped into non-League football with Havant & Waterlooville in 2014, spending five seasons at the club and making 151 appearances, before bringing an end to his playing career. In his first season in charge at the Bob Lucas Stadium, he led his team to an 18th-placed finish, one spot lower than Alty.

A win for Altrincham at the weekend could see them climb to 10th in the Vanarama National League table, possibly leapfrogging Stockport County and Woking in the process, depending on how those two get on in their game at the Kingfield Stadium. However, a win for Weymouth could lift them up to 16th, only two points behind Alty.

Tickets can be purchased by following the link below.

You can listen to live commentary on Radio Robins, sponsored by Ashley Mowers Garden Machinery and the  broadcast starts at 2.45pm

The commentary team is Brian Flynn and Paul Salt.

Not coming to The Bob Lucas Stadium this weekend? You can still follow the game via the following ways.