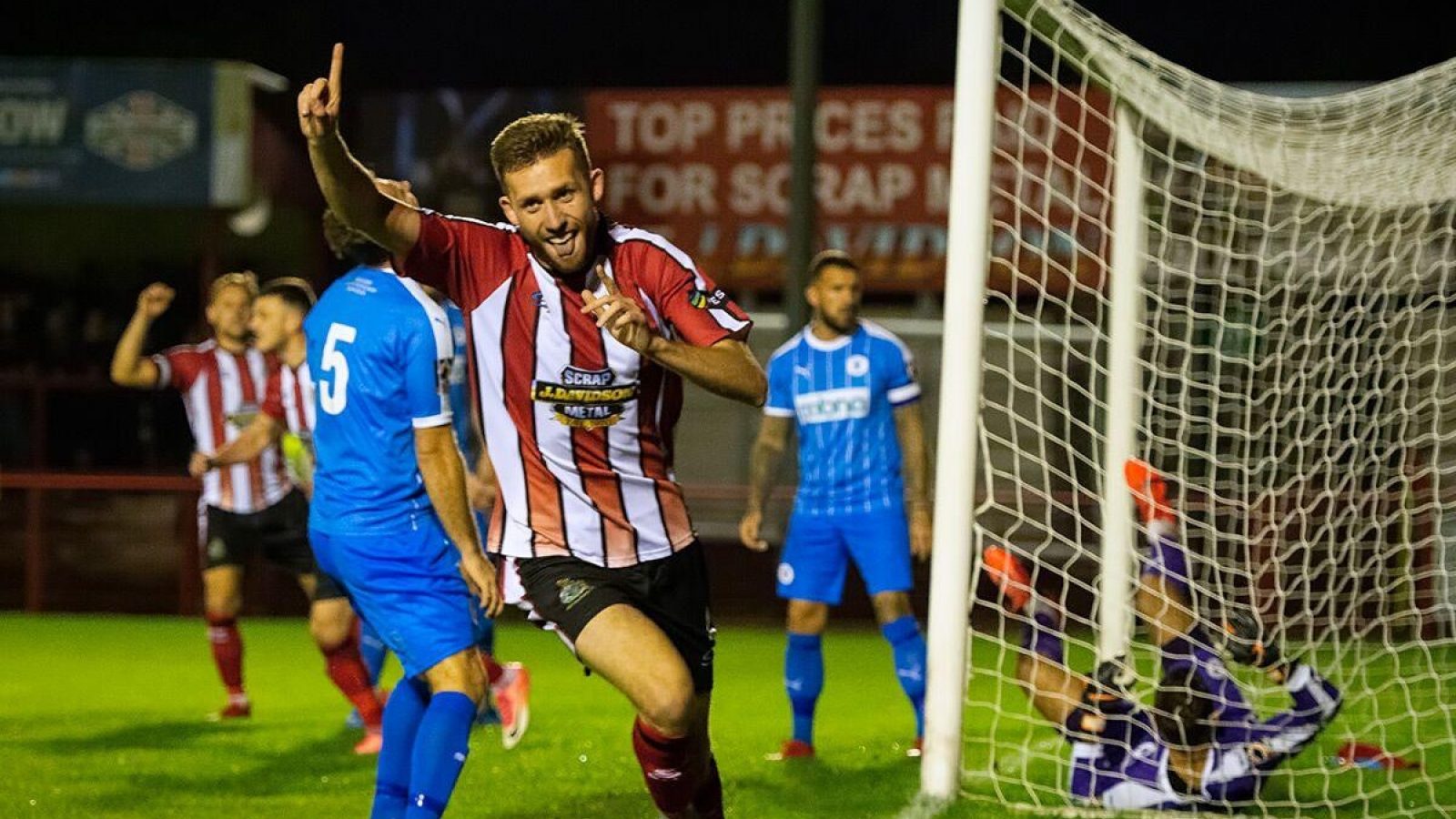 Head start .. James Jones wheels away to celebrate after winning the aerial duel for a second-minute corner and nodding Alty in front. Picture by Michael Ripley.

This is an extended version of the article press and media officer John Edwards submitted to the Sale and Altrincham Messenger for inclusion in this week's paper.

Phil Parkinson was beaming with pride after Altrincham turned on the style to win a pulsating FA Cup second qualifying round replay with Chester at a rain-soaked J.Davidson Stadium on Tuesday night.

The game had to pass a teatime inspection, after torrential rain throughout the afternoon, but Alty made light of the conditions to go ahead through James Jones in the second minute and bring the best out of Chester keeper Russ Griffiths in an action-packed tie.

‘Some of our counter-attacking football was electric, and their keeper outstanding on the night and certainly kept them in it at times’ said Alty boss Parkinson, after his side’s 1-0 win booked them a third qualifying round tie at Halesowen. ‘There were saves he had no right to make, and he was the reason we weren’t well out of sight long before the end.

‘The save from Jordan Hulme late in the first half denied us a goal-of-the-season contender. It was a phenomenal move that covered the length of the pitch. That was us at our best, and it would be interesting to know how many passes were involved. The intricate play was outstanding.

‘The will to keep them out and the flair we showed attacking-wise was second to none, and I am exceptionally proud of the lads. Over the two games, we were well worth our place in the next round. We were superb in every department.

‘I told the lads they would have to turn up, because Chester would, and that’s exactly what they did, every one of them. They did the club proud.

‘It was a real team effort. We are not about individuals; we are about the collective. There is always room for talented players in my team, but we can’t afford anyone not to put a shift in. I think that is the way the modern game is going, and you could see tonight that when we deliver as a unit, we take some stopping.

‘It was a fantastic cup tie, every bit as good as I thought it would be, and we had top performances in every department. Both centre-halves (Tom Hannigan and James Jones) were outstanding, Shaun Densmore did really well and so did Andy White.

‘I had a little go at Andy after the Kidderminster game, but I couldn’t have asked for a better response. That was him at his very best. When he plays like that, he should be in the Football League, not Conference North.

‘When he’s at it, like he was tonight, there are not many who can defend better in one-on-ones. George Waring would have been clean through near the end, but Andy timed his tackle to perfection and took the ball off him clean as a whistle. The challenge now is to maintain that level on a weekly basis.’

‘It seems Yusifu has torn his hamstring quite badly, and it is worse than we initially thought,’ added Parkinson. ‘He was able to have a scan at Blackpool, so at least we know exactly what we are dealing with.

‘It’s not a short-term fix, unfortunately. We are looking at about eight weeks from the time of the injury (September 7th), so it could well be early November before he is back in action.

‘It’s massively disappointing. It’s another blow, because if you look at recruitment, trying to bring in Yusifu and Ash Hemmings was a priority over the summer. Not having Yusifu for this long is a kick in the teeth, but, to counter that, Lewis Archer looks a really exciting proposition, if we can get him firing.

‘He can play anywhere across the front four, but I particularly like him out wide. He is exciting. He wants to beat players. He is very similar to John Johnston in that respect, though he is a different proposition physically.

‘He is very young and will make mistakes. It’s whether he will be able to do the build-up play we want him to do, but if he has open space in front of him, I don’t think anyone in this league will be able to stop him. Those are the sort of players I want to recruit.

‘He is physically brilliant. It’s just whether we can get the quality out of him, in terms of an end-product. If we can, he won’t be here very long.’