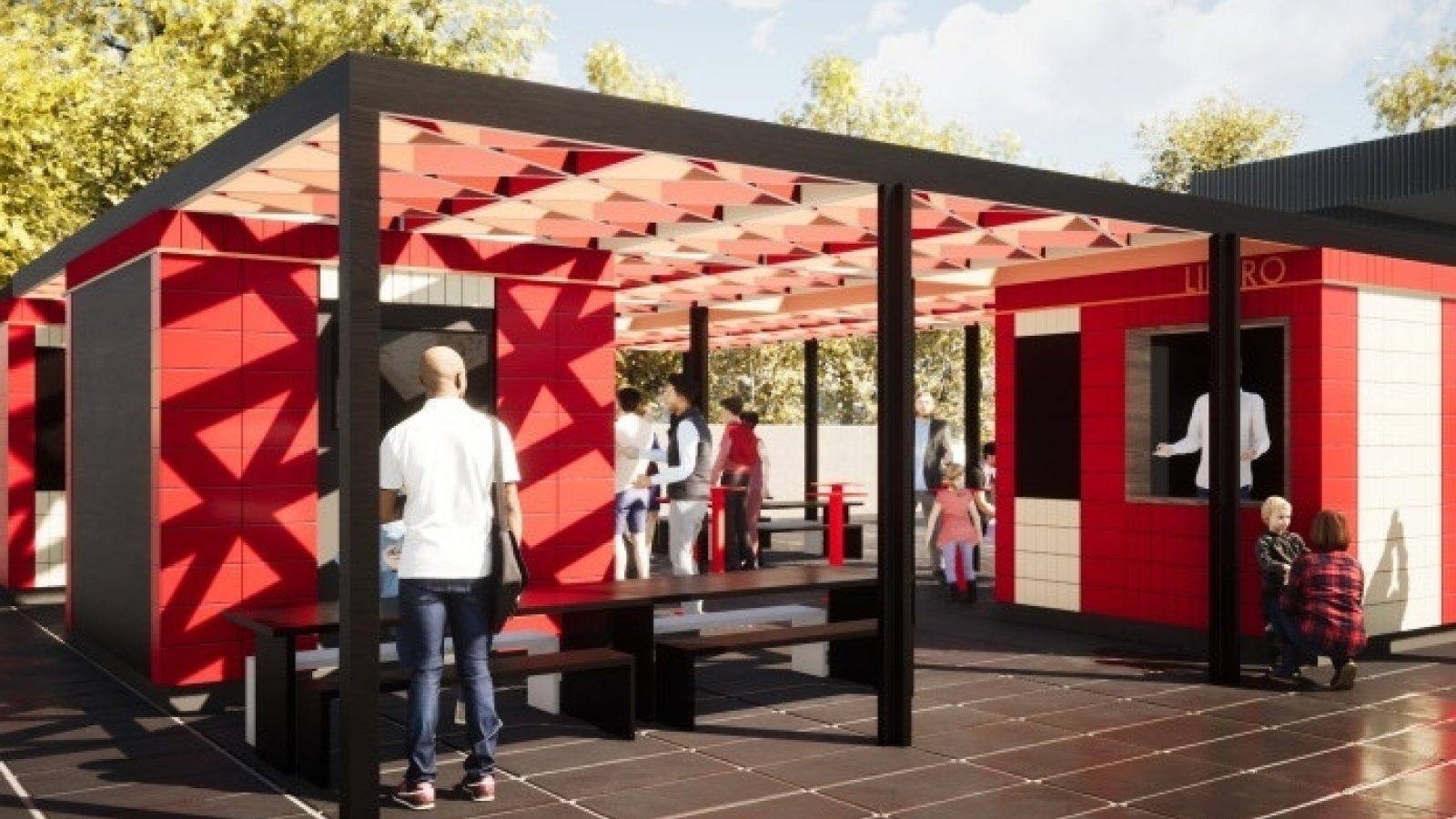 Co-Chairman. Bill Waterson, brings us this update on the eve of the first National League game of the 2021/22 season at The J.Davidson Stadium against Dover Athletic.

Nearly two years ago and before the world was turned upside down by COVID-19 and lockdowns, Altrincham FC, Define Architects and Libero had a vision for the Popular Side / Golf Road corner of the ground – the creation of a Fan Zone, the revitalisation of an underused corner of the ground and the creation of a space that would bring some of the energy and drive of Altrincham Town Centre into the heart of the Football Club.

The Fan Zone was selected as one of the first projects in the 10 year plan for the overhaul of the ground, and people were enthused by it. Fans and businesses alike bought into the idea, and we raised funding into five figures to finance the first phase of the project.

We set ourselves the objective of having this first phase ready for action for the first game with fans allowed back in the stadium and all concerned have been working very hard to achieve this goal. We have been joined on the journey by two new players in recent weeks.

Armstrong Projects, who are construction project specialists and were the inaugural winners of the Altrincham FC Corporate Five-a-Side Tournament in May, are now driving the onsite works, providing both craftsmen and materials to get the job done.

Grono, a business newly moved to Altrincham and who specialise in creating outdoor living spaces are now coming in as the main sponsors of the Fan Zone and will allow us to accelerate the second phase. There will be more details announced on the Grono sponsorship and it is fabulous to have them join our team and the Fan Zone will provide a brilliant environment to see their products in action, as well as improving the match day experience.

However, we are not quite there yet – we are working hard and making good progress

'After the initial set-back of the pandemic, we have since had to face issues surrounding material supply and labour shortages across the construction industry, which unfortunately have had a knock-on effect on the progress of the Fan Zone.

We have worked tirelessly to mitigate this and finally have two pods which are in place and will be tiled by the first game of the season against Dover Athletic this weekend for everyone to see.

It is our hope that the rest of the construction will be finished, and the Fan Zone will be fully operational for the Notts County game on the 25th September.'

'Further, through continued discussions with our existing corporate sponsors, plans are already in place to extend the area earlier than anticipated; creating a better experience for all on matchdays by the end of the 2021-22 season.'

“Libero are delighted to be part of this really exciting initiative. We’ve got the Fan Zone up and running and we are in place and ready to pour pints for the new season. The beer lines are installed and we are good to go. We can see that with the work planned over the next three weeks that the Fan Zone is going to be something incredible for the club”.

We will continue to improve the Fan Zone in the coming weeks.

We have reached agreement with our first food vendor, who will be installed in the second pod by the time of the Notts County game. We will be installing the roof next week and extending it to cover all of the Fan Zone in this next phase of works.which will also see the addition of decking, artificial turf and landscaping from our new friends at Grono. And we are planning an external event to launch the Fan Zone before the Notts County game.

Whilst we have not quite got as far as we would have hoped by the start of this season, we have overcome many difficult challenges to get something in place, and the Fan Zone will become a fabulous addition to The J. Davidson Stadium.