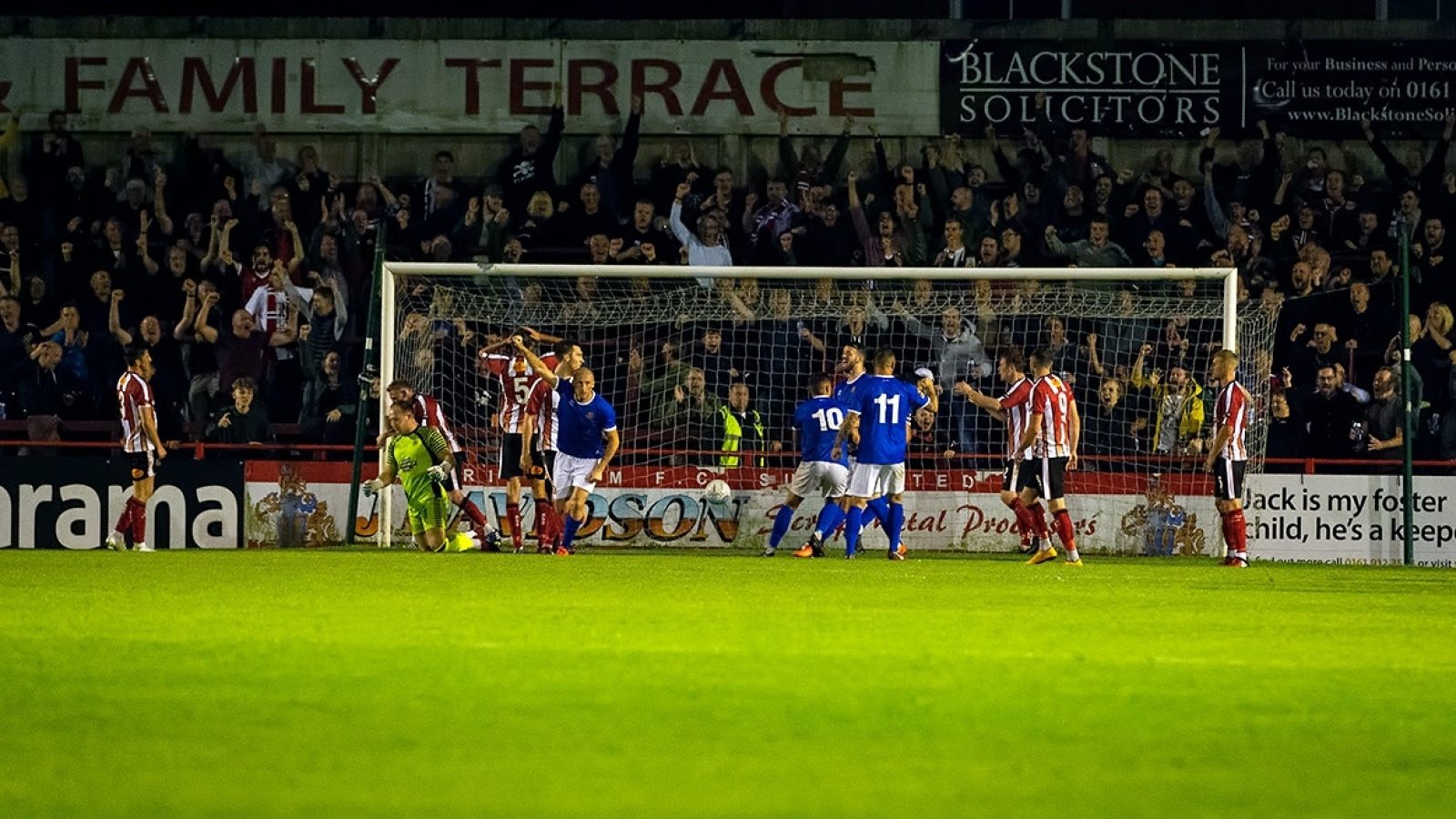 A brilliant late strike by Kurt Willoughby gave a spirited FC United of Manchester a shock win and brought Altrincham’s unbeaten start to the season shuddering to a halt in frustrating fashion at The J.Davidson Stadium on Tuesday night.

After exerting an increasing stranglehold on the game and going in front with a fourth goal so far from the irrepressible Jordan Hulme, the defeat was a tough one to take for manager Phil Parkinson, his players and a bumper turnout of Alty fans in a 1700-plus crowd.

Parkinson made four changes from the eventful 4-4 draw at Spennymoor on Saturday, with Shaun Densmore, Tom Hannigan and Ben Harrison coming into the defence for Andy White, Liam Goulding and James Jones, while Brendon Daniels replaced the injured Josh Hancock on the left.

The first half was not that dissimilar to the Leamington and Southport matches, with Alty dominating possession but finding clear-cut chances hard to come by. Growing Alty pressure yielded a series of set-piece opportunities and almost led to a breakthrough when Hulme headed a Daniels’ corner narrowly wide at the near post.

A moment of brilliance from Daniels, midway through the half, looked like doing the trick for Alty but instead ended in controversy. The on-loan forward expertly sidestepped two challenges inside the area and appeared to be flattened by the second one. Instead of pointing to the spot, though referee Scott Simpson awarded a free-kick to FC United and booked the Alty man, apparently for simulation.

It looked a harsh ruling by the official and was particularly unfortunate after a piece of outstanding skill from Daniels, who was growing in confidence and enjoying arguably his best performance since joining Alty from Port Vale prior to the start of the season.

After a goalless opening period, the second half started with a clear increase in tempo, and it was not long before Alty deservedly went ahead. Hulme and John Johnston made inroads down the right, as they so often do, and when Hulme’s deflected effort spun high in the air and dropped to Connor Hampson on the edge of the area, the full-back let fly first time.

It was a well-struck volley that keeper Billy Crellin failed to hold, diving to his right, and the ever-alert Hulme was first to react to the loose ball, pouncing on it and forcing it home from close range, to the delight of Alty fans packed behind the goal at the Gold Road End.

The way Alty were playing, that should have been the cue for another three points, but FC United had other ideas. With a resolve and verve that belied their lowly position, they took the game to Parkinson’s side and hauled themselves back on terms in the 65th minute, when Danny Racchi whipped in a corner from the right, and the giant Liam Dickinson rose above Ben Harrison to head home.

Buoyed by the leveller, Tom Greaves’ men showed no intention of sitting back and trying to preserve a point, as they boldly went for all three.

Their ambition brought its reward, too, as, just nine minutes from time, Willoughby picked up the ball inside his own half and powered towards the Alty area. Sizing up his options, as full-back Steve O’Halloran supported him on the left, he went for broke himself and beat Tony Thompson with an unstoppable curling shot into the top corner.

Alty pushed hard for an equaliser, with Tom Peers coming off the bench and going close with an effort that brushed the side netting, and Bay Downing, fresh off his three goals in two matches for the reserves, also going on.

It wasn’t to be, though, with another chance slipping by, when Hulme flicked on an inswinging cross but skipper Jake Moult just failed to get a touch, and time running out. A frustrating night then for Phil and the team, but there is an immediate chance to bounce back on Saturday as we welcome an in-form Boston United to The J.Davidson Stadium.