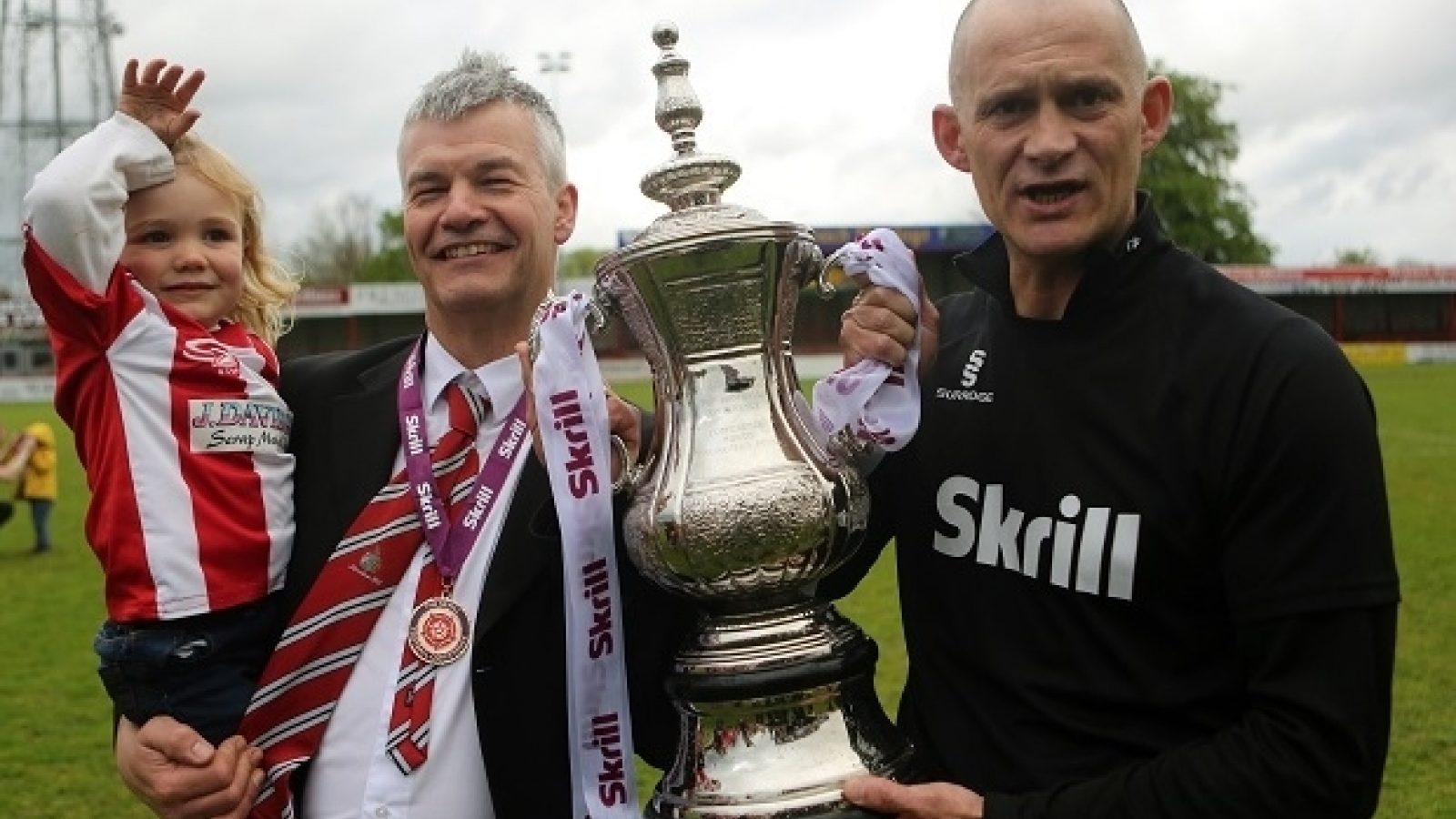 Sunday marked not only the end of another month, as May gave way to June, but the end of an era at Altrincham Football Club, as Grahame Rowley called time on his tenure as Chairman and handed over the reins to Lawrence Looney and Bill Waterson. While announcements on Sunday were confined to Grahame accepting the role of President, he did later confirm that he was, in the process, standing down as Chairman. It brought the curtain down on 18 years’ unbroken service in the Boardroom - the last 10 of those as Chairman - and signified an exciting new phase in the club’s development, as Grahame selflessly stepped aside and cleared the way for Lawrence and Bill to press ahead with ambitious plans for attracting investment and redeveloping the stadium. Here, Alty’s newly-appointed President reflects on his time helping shape the club’s fortunes and sends a personal message to supporters.

After very nearly two decades on the Board of Directors, I felt the time had come to step down as Chairman of Altrincham Football Club, as indicated in a recent announcement on the club’s official website. Once that decision had been reached, it became a question of timing.

I wanted to ensure Lawrence and Bill had every opportunity to settle into their new roles as co-Chairmen and begin the task of implementing the Board’s many exciting plans. Their focus needs to be on delivering proposals that promise to take the club on to the next level without any unwanted distractions.

Clarity over the structure of the Board could only help in that regard, and so, as I looked at the calendar and was reminded our financial year, 2019-20, was coming to an end on May 31st, it struck me as the ideal moment to make a clean break and clear the decks for the new incoming duo.

I wish Lawrence and Bill - and all the other directors - every success in continuing to steer the club in the right direction, and, as I look back over the past two decades, let me say first and foremost, it has been a pleasure and privilege to serve the club I’ve always supported.

Rewinding the clock almost back to the Millennium, I initially joined the Board in 2001, and then rejoined in 2002, along with Geoff Goodwin and Andrew Shaw. What a task we faced trying to get the club back on an even keel.

We worked tirelessly to eradicate debts of £650,000 which we inherited, and it is a measure of how we succeeded on that front that I leave with the club in its best financial position on record. It has been a turnaround of approximately £1million, and that is something I am extremely proud of.

In 2010, after clearing those debts, Geoff stepped down as Chairman, and I took on his role. The stresses involved during those years took their toll on everyone, but we achieved our objective of balancing the club’s books whilst reducing the debts year-on-year. It is easy to forget how difficult those days were, but, believe me, they were torrid times.

The ground packed to the rafters, Greg Wilkinson going on in the last minute of extra-time, ostensibly to take part in a seemingly-inevitable penalty shoot-out, the scenes that followed as he scored the winner with his first touch to spare us all the agony of spot-kicks ... who will ever forget that day?!

Seasons 2015-16 and 2016-17 saw the club suffer back-to-back relegations and a series of managerial appointments which failed to halt the decline. The failure of these managers was placed firmly on my shoulders by many. I do accept some of the blame for the appointments and performance of the team, but I have to say the “hate campaign” it gave rise to not only affected me but also my family.

Personal abuse was directed at me, and a number of people made it their aim to oust me from my position as Chairman. I could understand their frustrations with the fortunes of the club but not the vindictive personal comments.

I believed I was still the right person to lead our club back up the leagues, and with the appointment of Phil Parkinson three years ago, the Board’s vision was rewarded with promotion, as champions, to the Conference North at the first time of asking.

Three new Directors were installed with specific job roles, and they have grown into these positions month-on-month – two of them now taking on the Chairman’s role

In my own Pharmacy business, I sold it when it was still growing, and I feel there are comparisons to be made on the football front, in that the club’s fortunes are very much on the up, as I step aside.

I am extremely proud to have held the position of Chairman of our Football Club. It will remain our club - property of an Alty family I’m delighted to see is expanding all the time, judging by attendances this past season - but I feel now is the time for “new blood” to lead the way to a brighter future.

I think it’s fair to say I take my leave with the club in a far healthier state than when I joined the Board all those years ago, and I hope the planning and building of the Community Sports Hall in 2014 will be seen as a legacy I have left for future generations of Altrincham supporters to enjoy for many years to come.

It takes a lot of work for that to happen and to ensure the smooth running of a football club, even at our level. Thousands of hours, in fact, in the case of myself and my wife and family, but it’s something we’ve readily done because Altrincham FC means so much to us.

I always said that I was a custodian of the Football Club whilst I served on the Board – ensuring that there is still a club there to watch once I’ve gone – and I feel I have achieved that goal.

Thank you for all your support over the many years. I wanted to say that personally to all our supporters, because fans are the lifeblood of any club, and the depth of feeling ours have for the wellbeing of Altrincham FC shows itself time and again - not least in the way you have all rallied round to limit the impact of Covid-19 lockdown restrictions.

We have a special club with special values – let’s keep it that way, which I’m sure we will when you look at the set-up both on and off the pitch.

Finally, I was truly amazed to be offered the role of Club President at the awards night, and I have, with pride, accepted the chance to follow in the footsteps of Noel White, who was such a fantastic servant to our Football Club.

They are big shoes to fill but, as always, I will fulfil the role with dignity and integrity. I will also be continuing to oversee matchday operations at the Football Club. As Lawrence said on Sunday, the journey goes on, and I’ve a distinct feeling it’s going to prove both exciting and eventful.