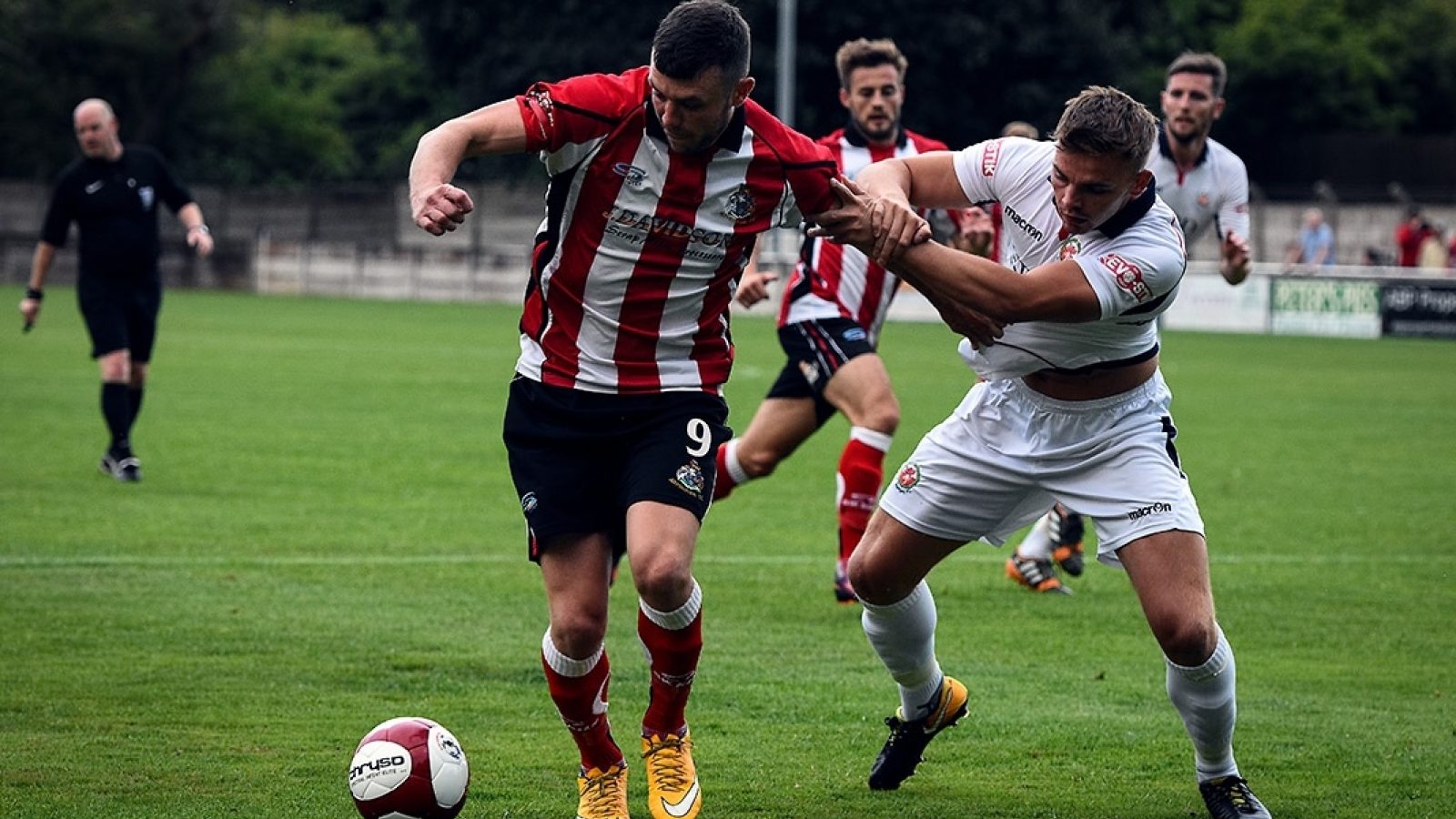 Jordan Hulme continued his impressive pre-season form with his sixth goal so far as Altrincham bounced back to winning ways with a 2-1 victory at Trafford on Tuesday night.

Last season’s leading marksman was the chief architect behind Alty’s free-scoring start to their list of friendly fixtures, with a brace of goals at Kidsgrove and a hat-trick against the Isle of Man in Douglas, as well as an assist for Tom Peers’ winner against Macclesfield.

In common with his Alty team-mates, he could do nothing about a flying start for Crewe that gave the League Two side a 3-0 scoreline at The J.Davidson Stadium on Friday night, but there was no keeping him out of the headlines as Phil Parkinson’s side recorded another thoroughly-merited win at Shawe View.

There was an early indication of things to come for Trafford when Hulme latched on to a pass from Bay Downing inside the opening 10 minutes and lashed an angled drive against the near post, with the home keeper well beaten.

Alty were firmly in control throughout a lively first half, constantly forcing Trafford on to the back foot with some slick passing moves, and it came as no surprise when Hulme made the breakthrough five minutes from half-time.

Connor Hampson’s deep cross from the left flank was headed back into the middle by Downing, and Hulme was on hand to chest the ball over the line from close range, making it six pre-season goals so far for the prolific frontrunner, with Saturday’s visit of his former club Salford City still to come.

Alty went in with a slender lead that would surely have been more comfortable but for referee Brown somehow failing to interpret a scything late challenge that took Downing out knee-high inside the area in the 35th minute as a foul. As Alty’s on-trial winger flew through the air and landed flat on his back, Brown, who was no more than 15 yards away and appeared to have a perfect view, looked over to his linesman for guidance before, to the incredulity of everyone inside the ground, waving play on.

Alty had more cause for feeling aggrieved when Trafford levelled matters in the 65th minute, as substitute Chris Palmer cut in from the right and curled an unstoppable left-foot shot into the top far corner.

The response was just what Parkinson would have wanted, though, as Alty began to exert pressure on a Trafford defence that gradually started to show signs of buckling.

Jake Moult tried his luck from distance with two efforts that flashed wide, while the ever-threatening John Johnston might have done better than clear the bar from 15 yards with his left foot after typical persistence from Hulme set him up.

Trafford’s resistance finally faltered in the 79th minute, when Sean Williams seized possession near the centre circle and ended a forceful run with a left-foot effort that flew in off a defender. Alty’s energetic midfielder may have had a slice of luck with the deflection, but he deserved it for the way he shrugged aside all efforts to dispossess him and made space for the finish.

There was still a scare for Alty when giant striker Mark Derbyshire’s goalbound header was hooked off the line by James Jones, but there was no denying their right to a victory that makes it played six, won five, lost one in a positive pre-season programme that culminates with an eagerly-anticipated home game against Salford on Saturday, kick-off 3pm.