Hulme sees red on off day for Alty 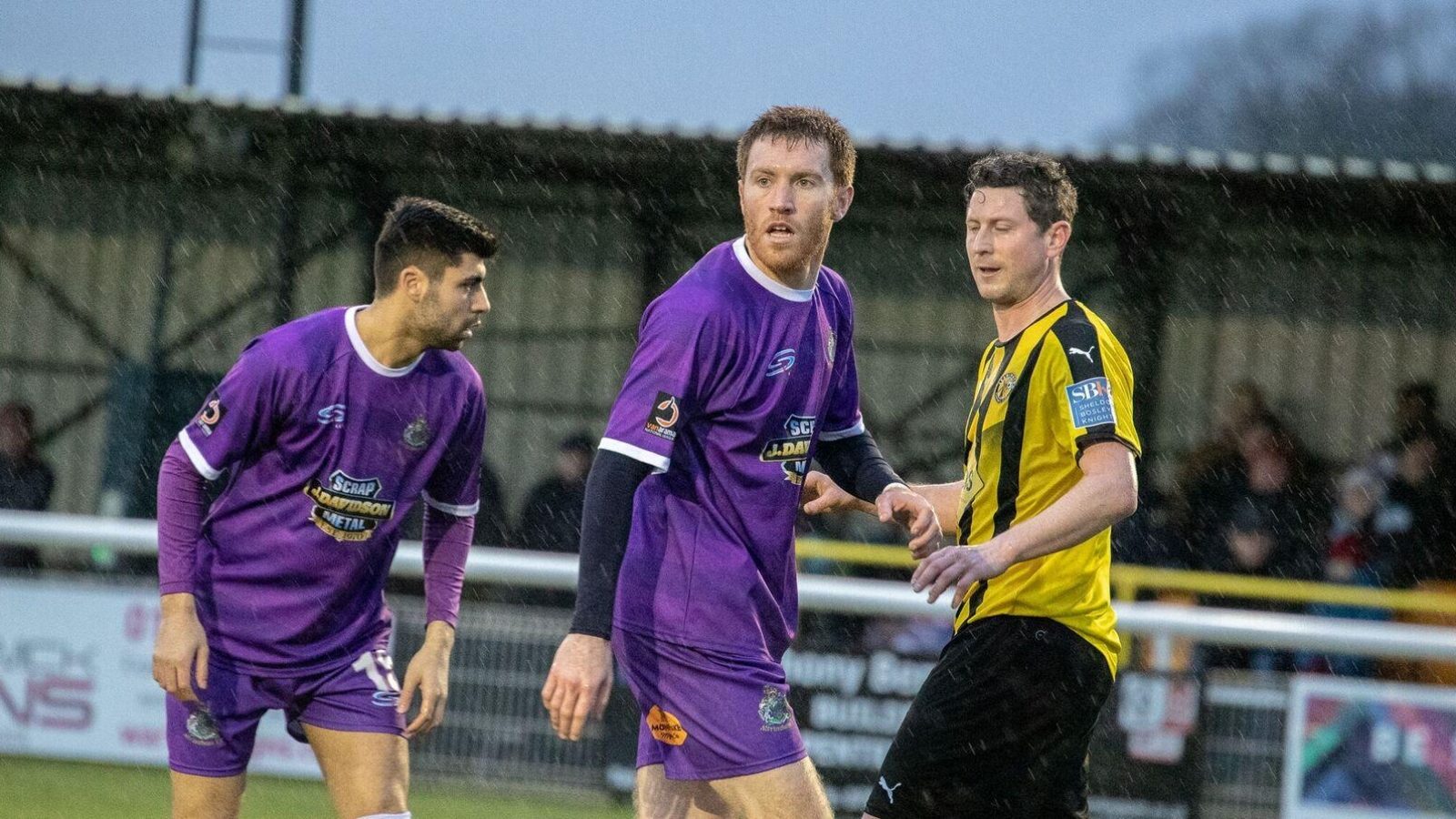 Altrincham managed to retain possession of the final play-off place, but little else went their way at Leamington on Saturday, as they shipped three first-half goals and lost Jordan Hulme to a contentious straight red card that is likely to keep him out for four games.

Alty were looking to build on last week’s morale-boosting win over Southport and looked in the mood to do it in the opening minutes, as they took control of the game and carved out two decent early chances.

Josh Hancock had Leamington backpedalling in only the second minute with a through ball that Hulme controlled in his stride on the edge of the area before teeing up John Johnston for a rising drive that just cleared the bar.

Five minutes later, Connor Hampson latched on to a pass from Max Harrop on the left and advanced into the Leamington area, only for a bobble to scupper his hopes of a breakthrough, as it sent the resulting right-foot shot sailing yards over.

It had been a bright start by Alty, on the front foot and forcing the pace, but all that changed – and how – once Leamington went ahead from their first real threat on goal in the 12th minute.

A fierce drive from danger man Jordan Murphy that looked destined for the top corner was deflected over, but it was to be only a temporary reprieve for the Robins, as slack marking from the resulting flag-kick led to defender Junior English bundling the ball over the line.

Set-pieces troubled Alty throughout the first-half, and that susceptibility almost cost them a second goal in the 27th minute. Leamington won the far-post aerial battle from a left-wing corner, and when the ball was headed back across goal, Jack Edwards looked sure to score from close range, only to be denied by an outstanding goalline clearance from Andy White.

Much as a strong wind was proving a problem for Alty, so were the attacking mainstays of a Leamington side who suddenly looked rejuvenated after their recent struggles. None more so than Murphy, who created the second Leamington goal with a moment of brilliance just after the half-hour mark.

A sharp turn 30 yards out left Hampson standing, and when the winger then surged into the area past Tom Hannigan, the Alty defender appeared to impede him. The referee saw it that way and awarded a penalty that Tony Thompson came close to saving, diving the right way but just failing to keep out Colby Bishop’s kick.

An already tall order took on even more onerous proportions just before half-time, when Bishop rose above James Jones to power a header past Thompson from a right-wing cross. There was a suggestion of hands weighing down on Jones’ shoulders, but the referee was having none of it and allowed the goal to stand, to send Alty in 3-0 down and staring defeat in the face.

Manager Phil Parkinson sent on Ben Harrison for Jones at the start of the second half, but it was symptomatic of Alty’s general malaise that the substitute’s first act was to clatter into team-mate Tom Hannigan, in the process of heading the ball clear, and leave him sprawling on the floor.

Hannigan needed lengthy treatment., and strapping round a damaged wrist, before being able to continue.

Even with the wind at their backs, Alty seldom looked like making inroads into the three-goal deficit, and any hope of doing so effectively disappeared when Hulme paid the price for involving himself in a dispute that had nothing to do with him.

New loan signing Nathan Waterston, on as substitute, felt he had been caught by an elbow by right-back English and appealed in vain for a penalty as he fell to the turf. English took exception to the Alty forward’s reaction to the challenge and let him know in no uncertain terms, as he leaned over him, at which point Hulme strode across and pushed the Leamington defender over.

It was spotted by the linesman on the far side from where the incident took place, and he flagged to attract the referee’s attention. After a brief consultation, the referee, who had not seen what happened, stunned Hulme by sending him off.

As a second red card of the season, it will presumably lead to a four-game suspension and further polarise opinion about Hulme’s on-the-edge approach to leading the line. While no-one can dispute it was a needless dismissal, given the game had gone and he had no reason to get involved, it is equally the case he was guilty of nothing more than pushing an opponent in the shoulder, an act that goes unpunished at all levels of football on a weekly basis.

There was no way back for the 10 men, though they did go close near the end when a sweeping cross-field pass from Jake Moult was inch-perfect for Johnston, who took it in his stride and clipped an angled drive that beat the keeper but bounced back off the near post.

It was that sort of day, but there were no excuses afterwards from Parkinson, who vowed to make full use of the two-week gap, before our next game at FC United of Manchester, and also step up his search for attacking reinforcements.