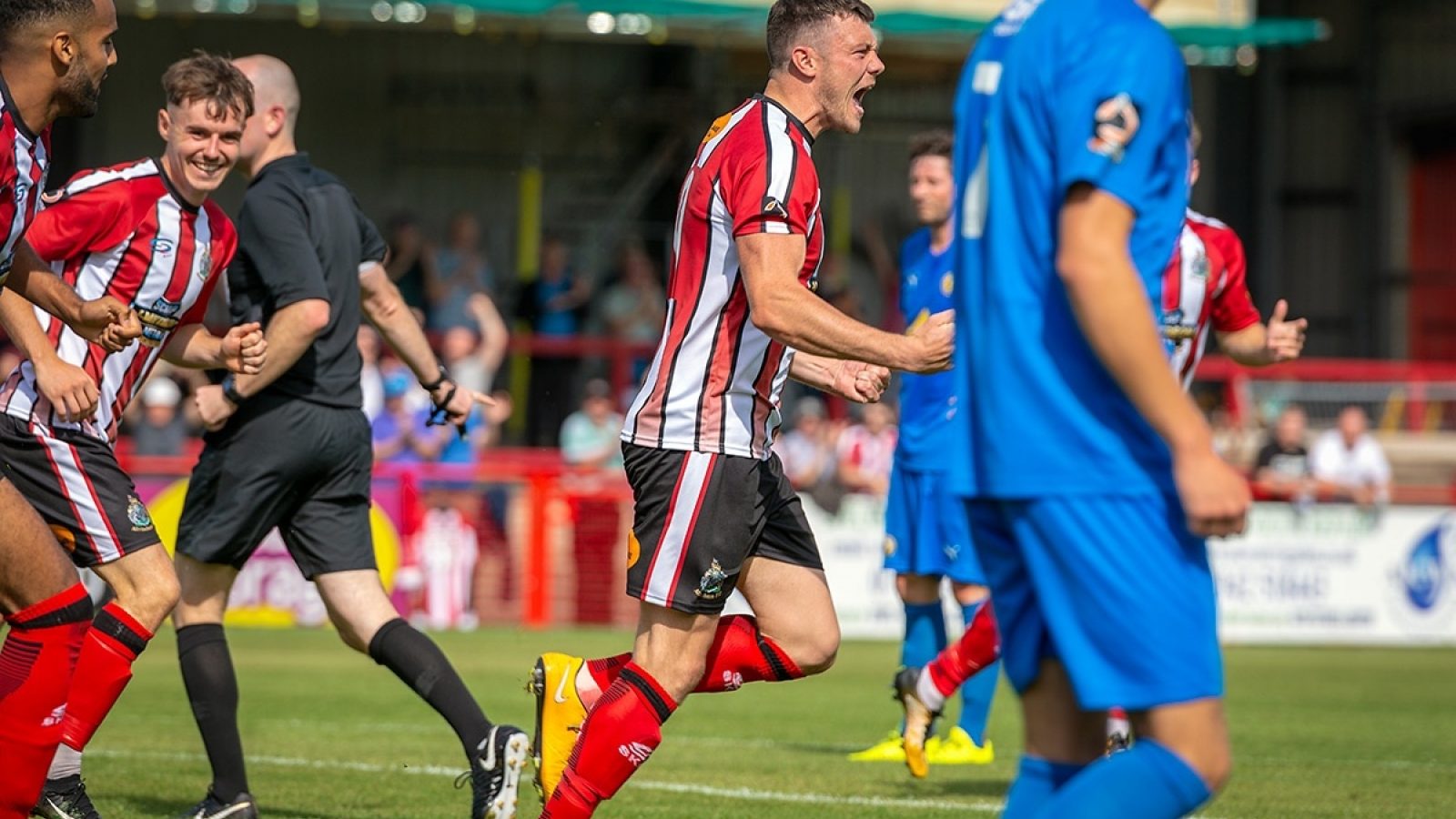 He impressed throughout pre-season, and Jordan Hulme showed he can also deliver when it really matters, as Altrincham opened their Vanarama National League North campaign with a lively, entertaining 2-2 draw against Leamington at The J.Davidson Stadium.

Fresh from scoring six of the best in an upbeat set of pre-season performances, Alty’s prolific frontrunner hit the ground running on day one of their league programme with two expertly-taken goals and three agonising near-misses late on that could easily have yielded the win Phil Parkinson’s side deserved.

With Tom Hannigan pickling up a minor injury and Ben Harrison still working his way back to full fitness, James Jones partnered summer signing Liam Goulding in the heart of defence, while Max Harrop won the vote for a central midfield start alongside skipper Jake Moult.

It meant Sean Williams and Simon Richman having to settle for a place on the bench, and Alty looked a side with a wealth of viable options in all areas as they quickly settled into their stride and exerted pressure on the Leamington goal.

For all their possession and approach work, however, they found the visiting defence a tough nut to crack and were still looking for a way through when a Leamington free-kick near their right flank led to a breakthrough against the run of the play.

Matt Stenson won the aerial duel for it and looked to have opened the scoring with a flicked header that appeared bound for the far corner. Fortunately for Alty, it hit the post and bounced out, but the luck didn’t last long, as Jack Edwards reacted first to force home the loose ball from close range.

The goal seemed to disrupt Alty’s rhythm, but, to their credit, they swiftly regrouped and not only finished the first half strongly but started the second even better.

Within two minutes of the restart, they were back on terms with a goal that owed as much to Goulding’s alertness, speed of thought and deed and footballing ability as much as anything. Brendon Daniels’s delivery from the left was overhit and would have accelerated away to the far touchline, but for Goulding reading the situation in an instant and retrieving it at full speed.

An essential requirement for any centre-half under Parkinson is the ability to use the ball, as well as defend, and it was evident in the way Goulding not only stopped it going out but swivelled and hit a cross deep into the area in virtually one movement.

It was perfect for Hulme, who met it with a firm goalbound header that keeper Tony Breeden got a hand to but couldn’t stop crossing the line, as Alty opened their scoring for the season in a manner that had a packed Gold Road End roaring their approval.

The cheers didn’t last long, unfortunately, as Leamington shocked a 1,000-plus crowd by going in front again in the very next minute. A ball into the box was only half cleared, and midfielder Callum Gittings met it with a perfectly-executed first-time volley that flew into the corner of the Alty net.

Alty, under Parkinson, have an abundance of qualities, and resilience is clearly one of them, judging by the way they bounced back and took the game to Leamington in a way that produced a second equaliser and so nearly a winner.

What a goal it was to make it 2-2. John Johnston weaved his way towards the right corner of the area before dinking a clever looping pass forward to Josh Hancock, who spotted Hulme to his right and laid the ball off to him. The rest was finishing of the highest quality, as Alty’s lethal striker took aim and lashed a low drive in off the far post.

It was all Alty in the closing stages, and the feeling grew that if a winner were to emerge, it would be the home team. Hulme continued to torment defenders, twisting and turning past one marker after another in an impossibly tight situation but just failing to generate the power to trouble Breeden.

If that came so close to being a moment of magic from the irrepressible Hulme, he did it again after being found once more by a sublime touch from Hancock just outside the area. Without even looking up, Hulme spun round, taking the pass with him, and released a measured chip from 20 yards that floated beyond the stranded Breeden but cleared the angle of bar and post by no more than a centimetre.

Alty were running out of time, and when Hulme hit the side netting from an angle, after a Johnston effort deflected off a defender, they must have sensed a third goal was going to remain elusive. So it proved, but there was more than enough in a performance full of purpose, determination and no little skill to suggest they can head to Southport on Tuesday with confidence and self-belief intact.