Humiliating, admits Phil, but we'll get through this together 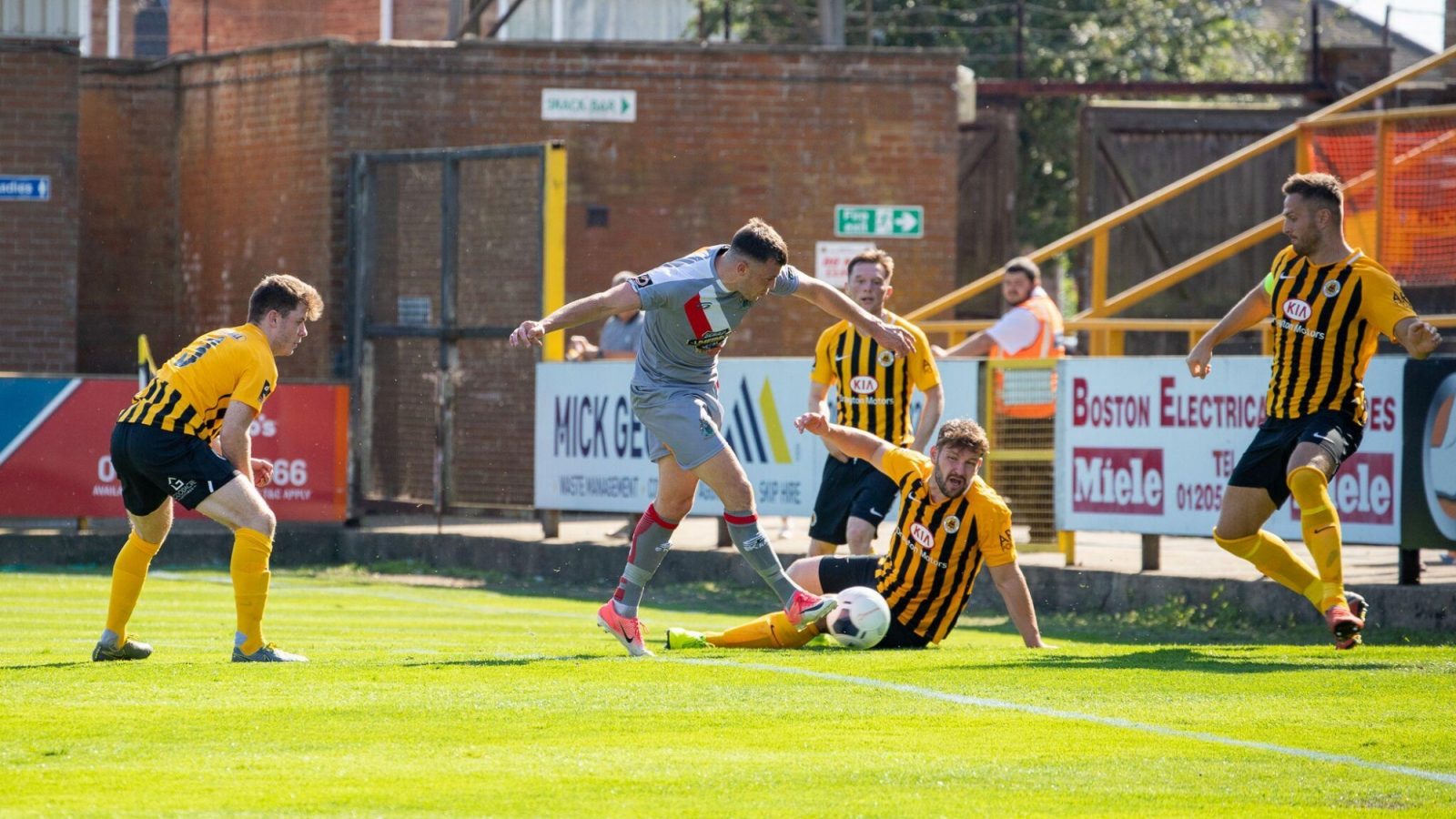 *So close - this is the nearest we came to a goal, when Jordan Hulme had a point-blank effort brilliantly blocked. Picture by Jonathan Moore.

In a post-match interview with press and media officer John Edwards, Altrincham manager Phil Parkinson delivered his verdict on Monday's 5-0 defeat at Boston United, the heaviest of his reign as Robins boss, and gave an update on injuries to Steven Drench and Josh Hancock. Here is the interview in full.

Q: I don’t think anyone saw that coming, did they, Phil, least of all you?

A: No, certainly not. It’s really, really disappointing. Humiliated is probably the word that describes how I’m feeling. I said to the players I feel like we are stealing a living today - picking up a pay packet after a performance like that doesn’t sit well with me. It’s not acceptable in any way. It needs to improve drastically.

You could look at Saturday and say there was nothing left in the tank after playing with 10 men for so long, then nine for the last few minutes. The lads were gassed out at the end, but you need to show more pride - even if it’s just keeping the score respectable.

That wasn’t an Altrincham team I recognised or want to be associated with. I’m deeply hurt and feel we have let down ourselves and those fantastic travelling fans. Sometimes you get a result like this and it can kick-start your season, but I’m struggling to see it that way at the moment.

There are lots of questions being asked of us at the moment, and it’s up to us to come up with the answers. I think I know the reasons and I know it’s not a quick fix, especially on the style of play and the scoring goals. I think we have looked quite strong defensively, up to being an absolute shambles today. On that, we had a very young back five today, so did they lack a leader?

There are a lot of things to consider, but we have strength in depth in our squad, and we should be able to cope with changes.  I think that’s all we’ve been doing really, coping, though we didn’t even manage that today. But that’s not what this club expects any more, just being able to cope at Conference North level.

Boston were the better side and deserve all the credit. They were far better than us in every department, especially midfield. It’s tough for me to say that, because I think ever so much of that group of players in our dressing room, but there is a lot of soul-searching going on in there, as you would imagine after a result like that.

Q: You could point to previous games this season and argue we deserved more points, but this just didn’t look like a Phil Parkinson team today. How much did that concern you?

A: That’s the bit I certainly won’t accept - the lack of identity this team has built itself on. I’m not one to threaten lads with changes and personnel coming in and out, but, after that, I have to do something. I can’t just accept that. It felt very much like the Leamington game last season. It was a performance that didn’t even resemble what we are about, but I have seen elements of it creeping in, in terms of bravery to play. You have to be mentally strong when things aren’t going your way.

I feel nothing is going our way at the moment, but, even so, I did not see a 5-0 coming. I expected it to be tough after Saturday, but the manner of the defeat was simply not acceptable and won’t be tolerated here.

Q: You know the players and what they are capable of - how important is it they start showing their true colours next Saturday?

A: That will be the aim, of course, but I don’t think it’s going to be a quick fix. I said to myself after the Brackley game it could get worse before it gets better, and that was certainly the case today. I’m not coming out and saying it’s fire and brimstone, because the lads put in a magnificent shift on the Saturday against Darlington, but then they produce that today.

They have either got to start believing in it and doing it properly, or I will have to bring other people in, because there is only so long we can allow this to continue. We’re at game seven and have won once; the numbers don’t lie.

I’m certainly not going to give the players an easy ride after that shambles. They are the ones on the pitch who can influence the outcome of a game. I praise them when they're good, but they have to accept criticism, as I will, after that.

We give them a lot of autonomy, but they also get plenty of information and guidance on how things should be done. It simply has to be better all round, because when you get a result like this, all we do is allow those waiting for us to fall to creep out of the woodwork and have a pop.

And we have to accept we are defenceless after that. I understand that. All the criticism we get is deserved. What happened today is going to dent confidence. It’s going to affect morale. We will see what the character is like in the camp and how quickly we can come back from this. The natural assumption is we will bounce back straightaway, but that was humiliating, and the lads are going to have to show a lot of character and bottle to get back on track immediately. Farsley certainly won’t be feeling sorry for us.

Q: Could you give us an update on injuries, in particular Steven Drench and Josh Hancock?

A: Steven looks to have ruptured his Achilles, unfortunately. He is seeing a specialist, and we should know more after that. It is really bad for him. Just by guessing and going by what you would normally expect with that sort of injury, I’d say we’re looking at a minimum of four months out. I need to sit down with him to see where his head is at, because it’s a long road back with a demanding rehab programme. We are all devastated for him, because I felt he was getting back to where he was a few years ago, really agile and fantastic kicking.

It is a massive blow, because you can’t just go out and sign another Steven Drench. It’s not as simple as that. It was a big ask for Tony Thompson to come in cold, but he made a great save in the first half and couldn’t have done much about any of the goals. Tony has an opportunity now, and the aim must be to get back to the levels he showed at the back end of last season that earned him his new contract.

He’s more than capable; it’s again how quickly he can get up to speed. We get Josh back for one game, and he pulls a calf. How unlucky is that? It’s probably going to be another week, and I’d be very surprised if he is available for Saturday, but you never know - he’s a very fit lad.  On top of that, there’s a three-game ban for Tom Hannigan.

Q: The Alty fans who were here have travelled a long way - what would be your message for them?

A: I made a point of going over to them at the end to thank them them for the support with the lads because I really felt for them after such a long journey for so little. I felt we had completely let them down, and I’m sure they will have felt the same way.

I know how passionate they are, and I could feel their frustration. They had every right to be angry, because they don’t have to endure that sort of performance any more, or they shouldn’t have to, anyway. I think they can see the bare minimum the lads will give is effort. Everyone can see in every single game, we have gone to the bitter end, even if it hasn’t gone our way. We have never thrown the towel in, so I’m sure they will have looked at it today and scratched their heads, thinking: ‘What has happened here?’

I certainly don’t believe a team that reached the play-off semi-finals last season have become a bad team overnight. The supporters have been brilliant, and I would like to think we have been able to buy that bit of trust after what we have done so far. We won a championship at the first attempt and have brought nothing but success since arriving here. Maybe this is a bit of a tough time for us, but the only way to get out of it is by sticking together.

This league is ruthless. The start was always going to be tough, but I didn’t expect the results to be like this. You can pick the bones out of the games, like Chester, Gloucester, Brackley and even Darlington, and argue that we could easily be sitting here with at least seven more points. But you make your own luck. I really believe that, just as I believe we’ve got a great group of players who will turn it round.

We always celebrate the good times but for me a club is judged on how it comes together through the rough times as well. Hopefully, we’ll repay the great support we’ve had this season sooner rather than later.