It was always Alty for me, says boardroom new boy Cathal 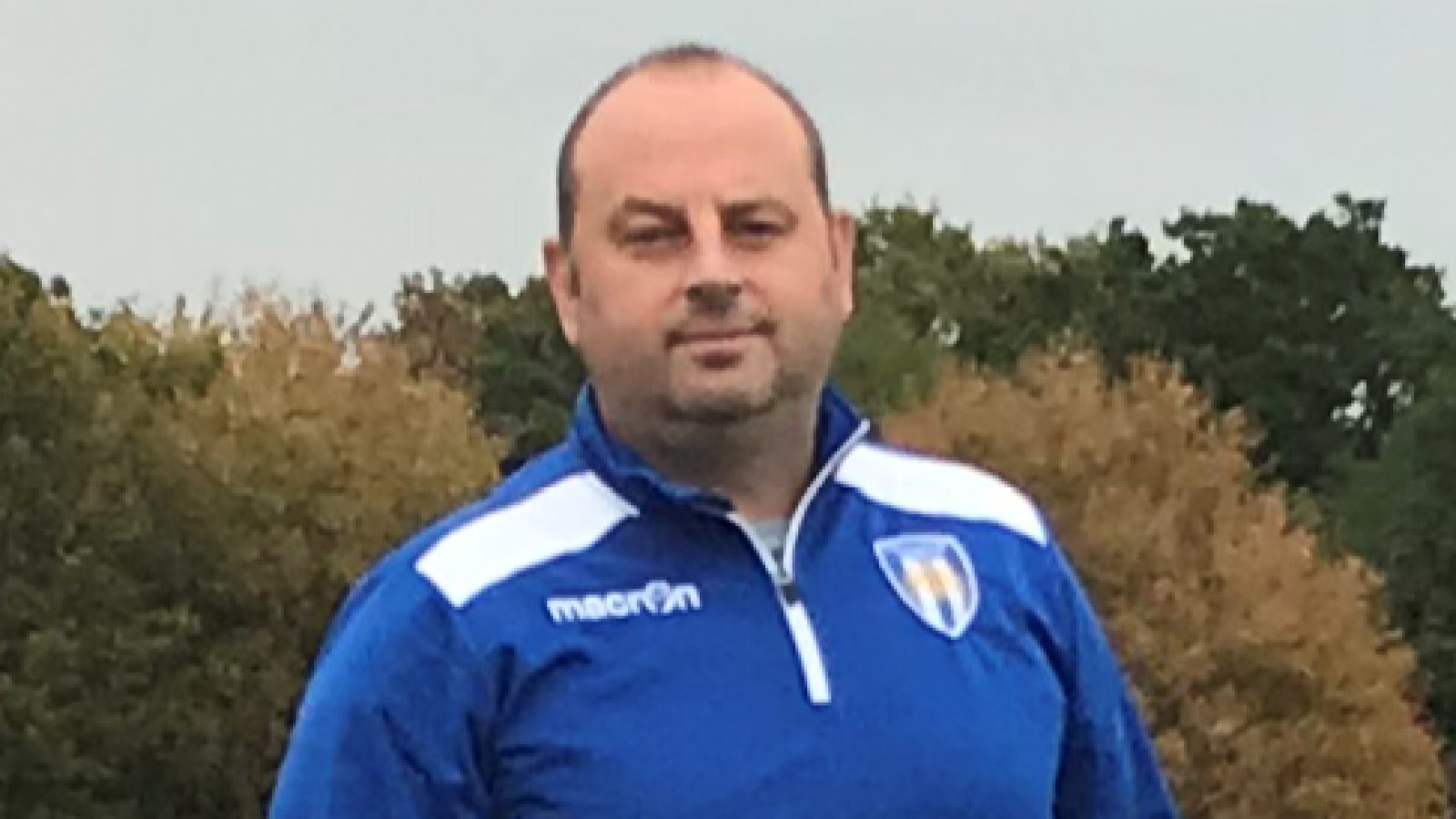 It was announced yesterday, here on the club's official website, that the board of directors at Altrincham FC has been strengthened by the appointment of Cathal Morrison, following a meeting last Thursday. But who is the new face at The J.Davidson Stadium, and what are his hopes and plans for playing a part in the ongoing Alty success story? Press and media officer John Edwards endeavoured to find out in an interview that is reproduced in full, below.

Q: How did the initial contact with Altrincham come about?

A: It was partly because I watch a lot of non-League football and have been involved at this level for a while. I knew all about Altrincham’s history, all the famous FA Cup exploits down the years, and I’m often on their website, and that’s how I came to see some shares might be available to buy.

I wanted to get involved with a club, and it basically came down to a shortlist of Altrincham and three others, another in the National League, one in National League North and one in League Two. I spoke to all of them, and it’s fair to say Alty came across best. They were the furthest away from my doorstep, but I still chose them, so that tells you how well they came across.

Q: It was a big decision, and it sounds like you mulled it over carefully?

A: I gave it a lot of thought, and it eventually came down to a straight choice between the League Two club and Alty. I had a final meeting up at Moss Lane, at The J.Davidson Stadium, and I was sitting with Bill and John, and then Gavin Watts from Define Architects popped in to discuss plans for the stadium, and it just felt right. It felt like the club I wanted to be part of.

My decision was more or less made before I drove up that day, but I suppose I just wanted to convince myself I was doing the right thing. The League Two club are a lot nearer to me than Altrincham, which is a four-hour drive, but I knew I was making the right choice. I just knew.

Q: Anyone listening to all the factors you had to take into account might have thought the odds were stacked against us, so what made the difference? What pointed you in our direction?

A: The people, the history and the map in which the club are choosing to go.

Q: By people, do you mean those you spoke to on the board?

A: Ah, not just the board. As soon as the first door was opened to me at the club, I was struck by the warmth of the welcome I received and the sense of ambition. Not just ambition, but a conviction about delivering. I saw Neil Sorvel on that first visit. We had a chat, and he came across really well, and I met Simon Dow as well.

Handshakes were out, so it was a case of elbow bumps, but they were all very welcoming and we had a good natter. I remember my first drive to the ground, approaching it from the Hale Barns side and seeing the stadium come into view, and it just felt right. The League Two club have a very impressive set-up, to be fair, but I just found myself drawn to Altrincham.

There’s the history, of course, but perhaps there was also an element of my father living in Manchester for a while many years ago. He lived in Fallowfield, so maybe there’s an attachment there. I just don’t think it would have gone any other way. The guys didn’t have too much convincing to do, put it that way.

Q: How long did you spend up here during all the discussions?

A: On my first visit, I was up and down in a day. I was in and around the club most of the day, because that first meeting went on for about four hours. Prior to that, I spoke to Lawrence and Bill separately, and then together on a zoom, and I was up again for the opening game against Weymouth, and I’ve streamed every game since.

I’ve been keeping a close eye on the club for a while, and I have watched all the Alty TV documentaries. You could say I did my research on Altrincham, and I liked what I saw. If I had 10 votes to cast, Alty would get seven and the others I considered one each.

I know we are part-time - semi-professional, if you like - but it’s great to see us up in the National League, competing against so many full-time outfits, and the way the club is run, the direction we’re going in, is thoroughly professional.

Q: Just to reiterate, you have invested in the club by buying shares?

A: Yes, I was wanting to invest in a decent club, and Altrincham fitted the bill perfectly. I’m a Celtic fan at heart, but I haven’t invested in them, because I haven’t got a spare £8million! There were opportunities with the League Two club and Altrincham and the two in the National League and National League North, as well as some others lower down that wouldn’t have been suitable.

The shortlist was those four, and I emailed them all to express an interest. Lawrence got back to me within the hour, which I thought was really impressive. That’s how to respond, and it certainly gave Alty a head start. It always creates a good impression when you get such a swift response, and it makes you feel ‘yes, I want to speak with this guy.’ That set the ball rolling.

Q: And the distance involved didn’t put you off?

A: I won’t be able to make every game, I guess, but I’ll get to as many as I can. At least half, I would hope. There are plenty of National League games in this neck of the woods as well, like Dagenham and Redbridge and Boreham Wood, and King’s Lynn isn’t exactly a million miles away, so I’ll get along when I can.

Q: What words would you use to describe the club you’ve just joined?

A: Off the top of my head, I’d say forward-thinking and ambitious. That is what came across and impressed me straightaway. I know sometimes you have to take one step back to take two forward, but everything here is geared towards moving in the right direction and building on the success of the last few seasons.

You look at the stadium plans and other initiatives taking shape, and that comes across loud and clear. Everyone seems to have their own area of responsibility and contributes in their own way, and the collective is a board functioning effectively and ensuring the club keeps progressing. There’s also the fact that Bill lives in the south and Lawrence on the Isle of Man, and that helps. They manage the distance all right, so I’m sure I can.

Q: What do you see yourself bringing to the club?

A: Well, I’m an engineer by trade, but I’ve also got all my FA coaching badges and I’ve done Academy scouting for West Ham and Cambridge United, as well as first-team scouting for AFC Fylde. So, I can assist Rob where necessary, and I have also been doing a lot of talking with Neil Faulkner with regard to the stadium and the supply of electricity coming into the club.

We will need a bigger load going forward, and that is a specialist area for me. Stadium development and construction is something I can help with, and I’m looking forward to it.

Q: The coaching badges sound interesting - did you play much before going down that route?

A: I was very much at amateur level as a player, though I was very keen and played every Saturday and Sunday in Ireland. It wasn’t the same structure as over here, but I enjoyed it. I was one of those tall centre-forwards who liked the ball in the air, but I won my fair share of headers and scored quite a few goals!

I played right up to 30 years old, when I moved to England. I remember it was the last flight out of Belfast on New Year’s Eve, 2009, and as I settled in Essex, I started getting into coaching. I had already done FA level one and two when the local team my young son played for said they needed a coach, so I thought I’d put it all to good use and get involved with them.

Now I’m just looking forward to helping in any way I can with Altrincham - after all the meetings and talks we’ve had, I can’t wait to get started.

Q: Finally, what can you tell us about your personal and family background, and is Cathal pronounced the way it is spelled?

A: Well, I was born in Cork and grew up in Derry. I turned 40 last April, and I live near Brightlingsea in Essex with my wife, who’s an Essex girl, and nine-year old son Charlie. And, as for my name, you don’t pronounce the ‘t’, so you say it Ca-hal - the Irish way!