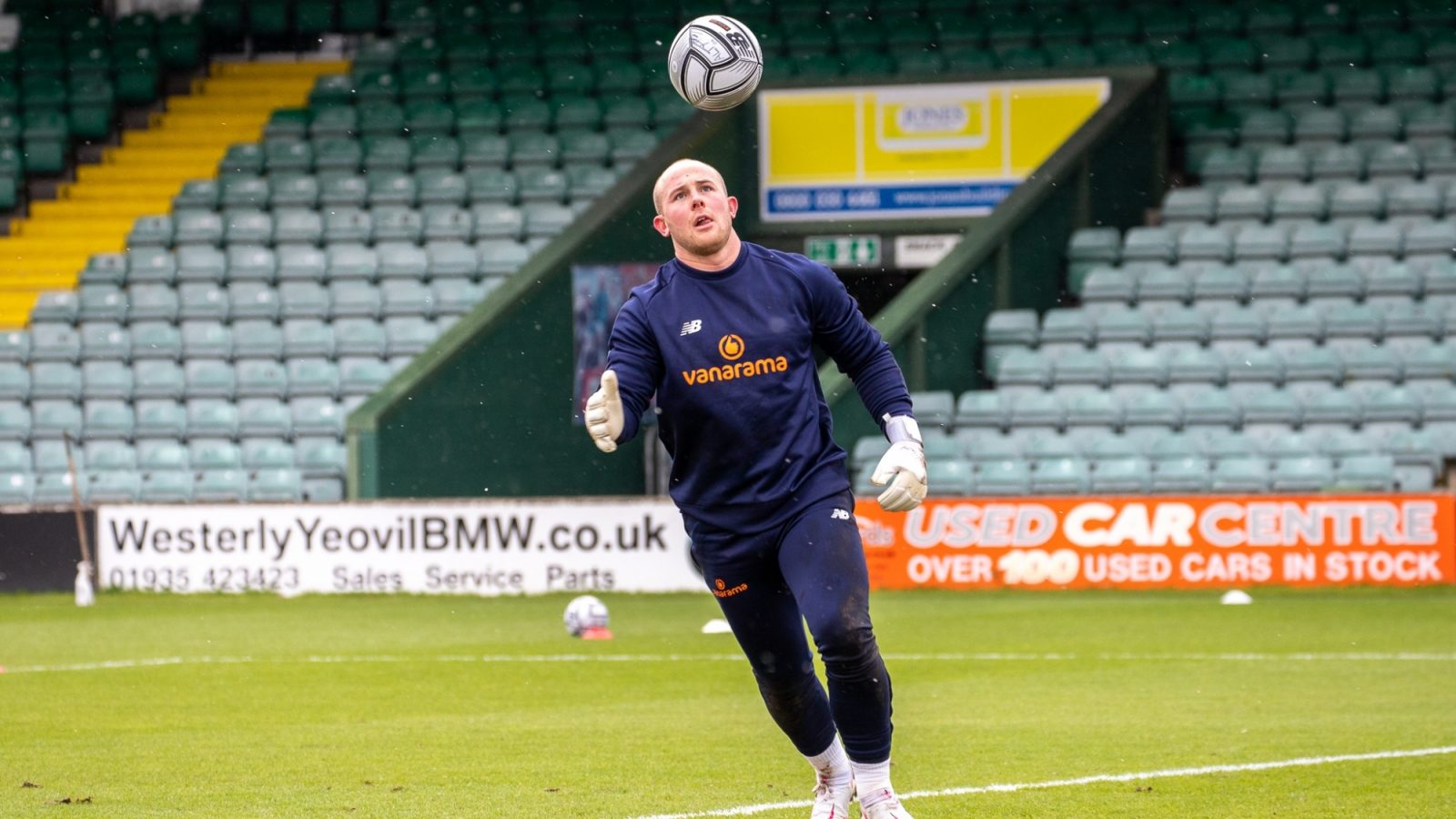 *Top man Tommo .. pictured here warming up at Yeovil, Tony Thompson is one of seven Alty players bowing out on Sunday.

Altrincham will be looking to end their season, and their status as a part-time club, in style as they welcome Yeovil Town to The J. Davidson Stadium on Sunday.

Following a 3-0 loss to play-off contenders Notts County at Meadow Lane, a patched-up Robins side responded in impressive fashion on Tuesday evening, claiming a point against FA Trophy finalists Bromley.

Bromley dominated the early stages and duly took the lead as Mason Bloomfield converted his first goal for the Ravens, after a poor defensive header presented the ball on a platter for the striker.

The hosts were knocking on the door for a second, but a world-class save from Matty Gould prevented them from extending their lead before the break.

Andy Woodman’s side looked as though they would hold on to three points when Alty skipper Jake Moult saw his effort drift agonisingly wide of the bottom corner with minutes left.

However, Dan Mooney had other ideas, turning his man on the edge of the penalty area in the 86th minute before firing a left-footed shot low across the ‘keeper and into the back of the net.

Now, it's on to Sunday and a season finale that will mark the end of not only the Robins' part-time status but seven illustrious Alty careers.

Skippers past and present Shaun Densmore and Jake Moult bow out after clocking up the best part of 1,000 Alty appearances between them, while Tom Hannigan, Tony Thompson, Josh Hancock, Connor Hampson and Andy White are all just as deserving of a rousing send-off after playing their part in a spectacular revival under Phil Parkinson and Neil Sorvel.

A new Alty era is almost upon us, the dawn of full-time professional football. A brave new age, indeed, but before it can happen, the curtain has to be brought down on the old era, one the aforementioned septet contributed to with such distinction.

So, get along to The J.Davidson Stadium on Sunday and pack Alty's famous old ground to the rafters to give these boys a farewell to remember. Kick-off is 3pm, but remember the doors open at 1.30pm and, with so much going on to mark Fan Appreciation Day, it may be worth getting their early.

You can watch the highlights of the Bromley game by pressing play below:

Following that result, the Robins remain 14th in the Vanarama National League table, one point behind Yeovil Town in 13th and only two points behind Southend United in 12th.

This will be the second meeting between the sides this season, with Connor Hampson putting in a heroic performance between the sticks as Alty drew 1-1 at Huish Park back in October.

Yeovil started brightly as Joe Quigley shot over the bar before Adi Yussuf forced a save from Alty 'keeper Tony Thompson.

Defender Hampson was then called into action with just 16 minutes gone after Thompson went off with an injury.

That didn't stop Alty going in search of a breakthrough, and Mooney shot narrowly over during the six minutes of stoppage time at the end of the first half, despite the disadvantage Phil Parkinson’s side had to deal with.

The hosts broke the deadlock just before the hour, when Quigley finished after the stand-in ‘keeper spilled a free-kick.

But the visitors were level with 25 minutes remaining as Mooney's low ball presented A-Jay Leitch-Smith with a simple finish.

Hampson was the hero once again late in the game as he made another fine save from a corner as Alty held on for a point.

You can watch the highlights of that game by pressing play below:

Members of the Championship as recently as 2014, Yeovil Town are a club that spent 16 seasons in the Football League, before their relegation from League Two at the end of the 2018/19 campaign.

Founded in 1895 and originally known as Yeovil Casuals, Sunday’s visitors have become the latest side with a League pedigree to find a swift return to the promised land a lot harder than they had previously thought.

After narrowly missing out on promotion in their first season back at this level, they struggled to a 16th-place finish at the end of the 2020/21 campaign. This time around, while their league position will certainly improve, Yeovil were never really in contention for a play-off place, something which has frustrated their fanbase.

With just one game left, Yeovil have a record of 14 wins, 14 draws and 15 losses, scoring 42 goals and conceding 46. They are also on their third manager of the season, with Darren Sarll taking the vacant Woking job before his temporary replacement, Charlie Lee, stood down days ago, with a managerial announcement expected shortly.

In their last match against Boreham Wood, Yeovil fought back from two goals down at home to rescue a point, ending Boreham’s play-off hopes in the process.

Tyrone Marsh fired Luke Garrard’s side in front after 11 minutes with a close-range finish from Jacob Mendy's dangerous cross.

Yeovil had a chance to level six minutes later, but Nathan Ashmore saved Dale Gorman's penalty after a foul from David Stephens.

Dennon Lewis punished the hosts after 27 minutes, winning the ball back 40 yards from goal before taking on a defender and slotting past the goalkeeper.

But Yeovil fought back strongly as Morgan Williams poked home from Tom Knowles' long throw on the hour mark, before Luke Wilkinson fired in a free-kick shortly after.

Yeovil Town are currently led by interim manager Josh Staunton, who took charge at Huish Park on Friday afternoon, replacing Charlie Lee, who was also in temporary charge of the Glovers following the departure of Darren Sarll to Woking.

The 26-year-old joined Yeovil in August 2020, following a two-year spell with National League rivals FC Halifax Town. Staunton has featured regularly for Sunday’s visitors this season, making a combined 35 appearances in all competitions, scoring one goal.

A product of the Gillingham Academy, he made his senior debut for the Gills in 2014 before being swiftly loaned out to Maidstone United. Ahead of the 2015/16 season, he made the switch to Charlton Athletic, before departing for Dagenham & Redbridge 12 months later.

One thing notable about his playing career so far is that he has struggled to settle down at any one club, featuring for Woking and FC Halifax Town after leaving the Chigwell Construction Stadium in the summer of 2017.

However, he seems to have found a home in the South-West of England, having spent the past two seasons at Huish Park. When the new manager is eventually appointed, it remains to be seen whether Staunton will feature as regularly as he has done this campaign, with the new boss likely to want to stamp his own image on the side.

A win for Altrincham on Sunday could see the club finish as high as 12th in the Vanarama National League table, depending on results elsewhere. However, a win for Yeovil could also see them climb to 12th.

Alty manager Phil Parkinson spoke after our 1-1 draw against Bromley at Hayes Lane.

You can buy your match tickets by following the link below.

The broadcast starts at 2.45pm.

The commentary team is Brian Flynn and Jonny Crowther.