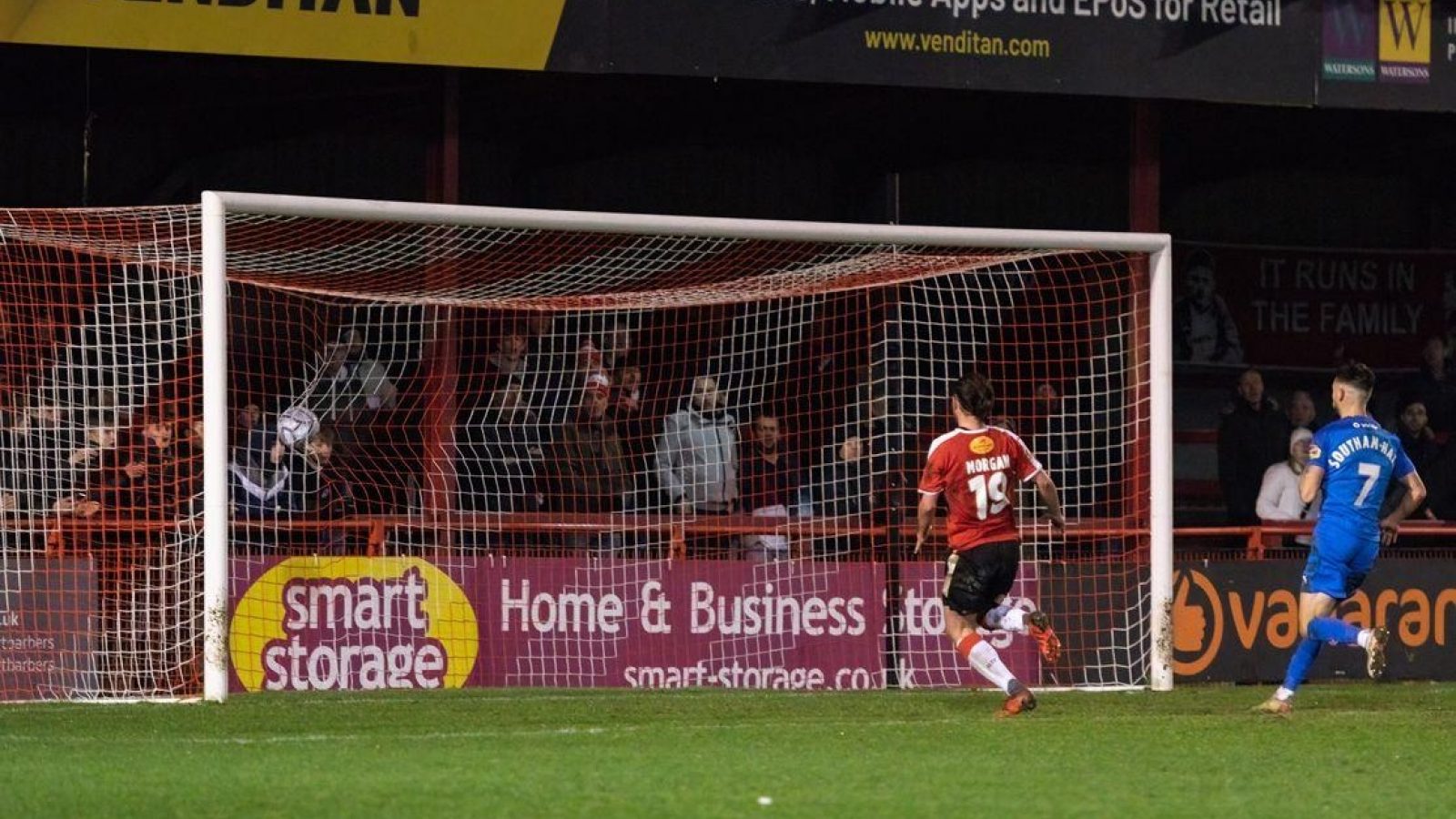 It’s not that much of a comfort after such a difficult night, but Altrincham can at least console themselves in the knowledge they won’t have to worry about Stockport County next season.

While retaining Vanarama National League status is uppermost in Alty minds after this chastening experience, trading theirs for a return to the Football League is all that matters to big-spending County.

And who’s to say they won’t do it? No-one in a bumper sell-out crowd of 3,900 at The J.Davidson Stadium on a bitterly cold Tuesday night, that’s for sure.

They’ve still got ground to make up on the leaders, have Dave Challinor’s multi-talented team, but that is unlikely to present too much of a problem, if we see many more examples of the masterclass that did for Alty.

Phil Parkinson will look at the way the game turned in the space of 60 seconds early on, and how his side contributed to their own downfall at times, but credit where it’s due - Stockport were irresistible, outstanding in all facets of the game.

Strong and powerful enough to match the most physical teams in the league, they have a quicksilver passing style that Alty struggled to live with and a speed of thought and deed that put them out on their own as the best side to visit Moss Lane this season.

Two goals clear by half-time, they put another two past an overworked Robins defence in the second half before Alty substitute A-Jay Leitch-Smith reduced the arrears in added time.

And yet, it might just have been a different story but for two goalmouth incidents, one at either end, separated by no more than 30 seconds in the sixth minute.

Stockport keeper Ben Hinchliffe’s momentum took him outside his area as he attempted to chest the ball down and clear it, and he suddenly found himself stranded as Dan Mooney nipped in to nudge it past him.

With defenders hurrying back to try and protect an otherwise-unguarded net, Mooney looked up and picked out Josh Hancock, who turned and swept the ball goalwards, only for Stockport skipper Liam Hogan to save the day for the visitors.

Hogan was the only player to have made it all the way to the line, but he found himself perfectly placed to block Hancock’s shot and hack it to safety.

What a let-off for the promotion-chasers, and they wasted no time capitalising on their good fortune, as they went straight up the pitch and went in front, as a left-wing cross was hooked back from beyond the far post for Antoni Sarcevic to force home.

County went close twice in the space of five minutes soon after, as Scott Quigley steered a great chance wide and Paddy Madden headed straight at Tony Thompson, and they were convinced they should have had a penalty in the 30th minute.

Quigley was incensed with both the referee and a well-placed linesman for failing to share his view that Tom Hannigan had clipped his heels as he darted through a gap on the right of the area.

The vantage point from the gantry certainly suggested he had been hard done by, but any sense of grievance dissipated in the 44th minute when Will Collar advanced unchallenged before unleashing a drive that left Thompson rooted to the spot as it swerved beyond him into the top corner.

If it was a bodyblow, conceding a second goal so close to half-time, going even further behind barely five minutes into the second half effectively finished the game as a contest.

A misplaced pass by Kennedy Digie, under pressure as he tried to play out from the back, was quickly seized on and switched to Collar, who was upended by Andy White’s challenge inside the area.

There was no leniency from referee Lewis Smith this time, and Madden calmly stepped up to send Thompson the wrong way from the spot.

It became 4-0 in the 66th minute, when Ryan Croasdale headed home a right-wing cross, and there was a distinct possibility at this point that County could emulate, at least, the five goals they chalked up on Boxing Day and inflict some serious harm on Alty morale.

But to the Robins’ credit, they showed a willingness to dig in and limit the damage, and it brought a belated reward as, after Hancock fired narrowly over, Leitch-Smith burst through on the right of the area and lashed a shot into the roof of the net from a tight angle in the last of the three added minutes.

Safeguarding National League status is the main focus for Alty now, and there won't be too many tears shed if Stockport achieve their objective and remove themselves from the Robins' fixture list next season.