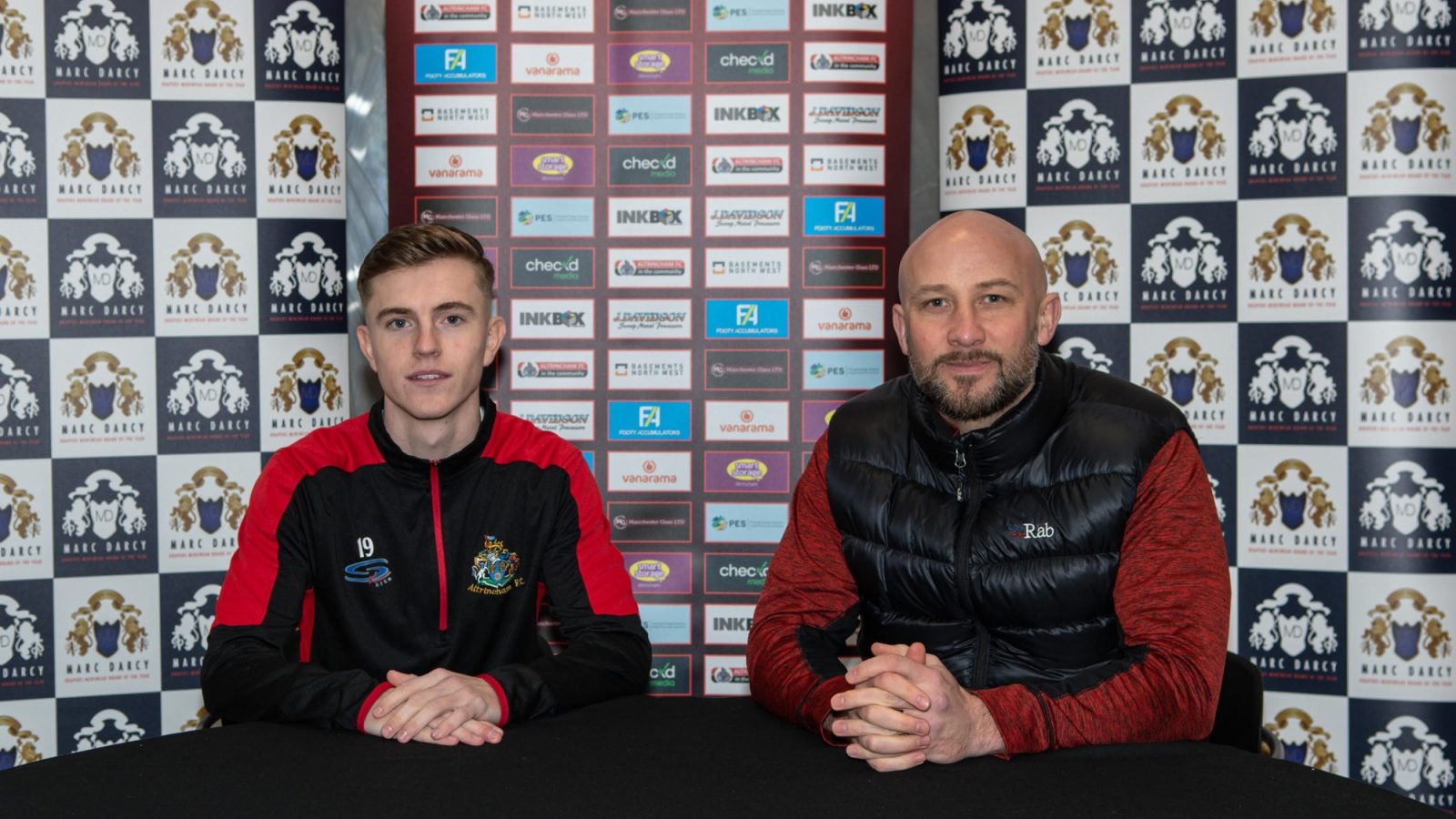 Phil Parkinson has significantly increased his attacking options after completing the exciting acquisition of James Hardy from AFC Telford United.

After the Vanarama National League North season was declared null and void, Telford announced on Saturday that they had reached an agreement with James to terminate his contract and he was ‘free to sign for a National League club next week.’

Altrincham are delighted to reveal we are the club in question and that the talented forward has signed at The J.Davidson Stadium and is available for tomorrow evening’s league game at Chesterfield.

Reflecting on the arrival of a player who can operate on the wing or in the number 10 role, Alty boss Parkinson beamed: ‘James is a player I tried to bring in last summer, and I am delighted to finally get him on board.

‘He is showing a tremendous appetite for the game. He has cancelled his contract and is taking a huge pay cut to continue playing football, which, apart from his undoubted ability, I found really appealing.

‘We have a number of injuries in our frontline at present, so this was an opportunity I couldn’t turn down. If he gets anywhere near the standards he demonstrated last time he played at this level, we will have made a very good signing.’

He will certainly take the eye if he reproduces the form he showed last time out at The J.Davidson Stadium, back in August, 2016, when he ran Alty’s defence ragged in a 6-0 win for AFC Fylde that marked the beginning of the end of Neil Young’s brief reign as Robins boss.

Playing on the wing, he had Alty on the back foot after only seven minutes with a run and cutback that laid the opening goal on a plate for striker Danny Rowe.

Unbelievably, it was 4-0 after only half-an-hour, when Hardy weaved his way into the area and smashed home an angled drive, and he had a hand in the sixth goal by Adam Bond in the 47th minute.

Dark a day though it was for Alty, it was impossible not to appreciate the Stockport-born forward’s dazzling skills in a Fylde side who went on to win the National League North title by a six-point margin.

Injuries, including a hernia problem, hampered his progress over the following couple of seasons, but he still did enough on his return to fitness to earn himself a contract with League Two Walsall.

Capped five times at England C level, he joined Telford at the end of last season, and such was the reputation he had forged for himself that New Bucks Head boss Gavin Cowan said at the time: ‘James is a real coup for the club, and I’m ecstatic to be able to sign someone of his ability. He is exactly what the group needs, and I can’t wait to see him get to work.’

Now, a combination of last week’s announcement about how this season will pan out and James’ desire to keep playing football has brought the 24-year old to The J.Davidson Stadium, and everyone at the club extends a warm welcome to him and wishes him a happy and successful stay.

Before James met his new colleagues ahead of training on Monday night, he spoke to Brian Flynn & you can listen to the interview below.