Lewis is a Robin, and he can't wait to get started! 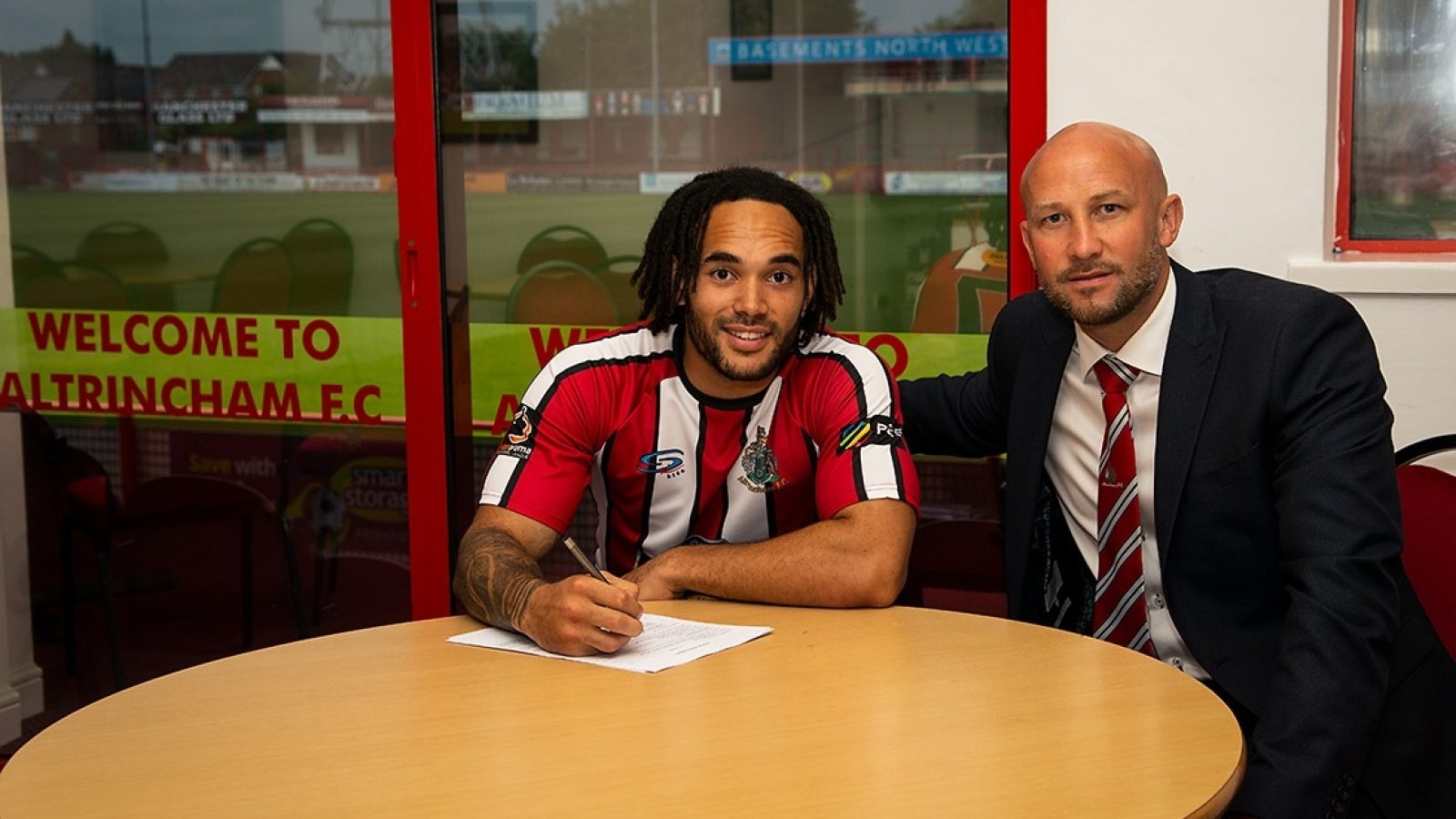 Lewis Walters has won himself a place in Phil Parkinson's Altrincham squad for the forthcoming Vanarama National League North campaign after making a favourable impression in recent pre-season friendlies and in training.

In what was the toughest of decisions, Matt Chadwick has not been kept on, despite also showing up well during the warm-up matches. Matt did his utmost to earn himself an offer of terms and leaves The J.Davidson Stadium with the very best wishes of everyone at the club.

In an interview with press and media officer John Edwards, Lewis gave an insight into his approach to the game and his aims and hopes for the new season.

Q: Welcome to the club, Lewis, how does it feel to have everything resolved for the coming season and be able to concentrate on doing your best for Altrincham?

A: I'm very happy to be an Altrincham player and I'm looking forward to making the most of this opportunity. The club are heading in the right direction, and I would love to play a part in maintaining that. For now, we just need some good results to get the season up and running, and that will be the aim.

Q: Can you fill us in on your background, prior to arriving here on trial a few weeks ago?

A: I started out at Leeds United when I was 15 and stayed there until I was 21. Then I went to Nottingham Forest, but my second baby arrived just as I was leaving them, so I joined Guiseley to be nearer home. I joined AFC Fylde after that, and to be fair, they offered me a new deal this year, but it wasn't what I wanted. I thought I would spread my wings and see what was around, and I'm delighted that's led to me being here.

Q: Did you get anywhere near the first team at Leeds or Forest?

A: I did. I was on the bench for the first team at Leeds a good few times when I was quite young, but then I got a knee injury that set me back. On top of that, they were getting through one manager after another at the time. We had six changes of manager in one season, and that counted against me, the age I was. It sort of killed me, really. It was hard, because when a new manager comes in at a club like Leeds in those circumstances, they are not going to take a risk on a young kid. They need results straightaway and are going to look no further than the senior players with experience. I just thought 'I need to get out of here'. At Forest, I did pretty much the same. I got injured and it really hampered me. I had been getting along really well with the under-21 coach, and he liked me as a player. Then I got this injury literally the day before he got put in charge of the first team! That was Jack Lester, along with Gary Brazil. I feel I would have been given an opportunity there, but for that. These things happen. It's just the way life panned out. I'm here now, and I've just got to try to get myself back up there.

Q: On Radio Robins, we've described you as a busy player who always looks for the ball and tries to make things happen - is that about right?

A: I feel like that is what I want to do every time I set foot on the pitch. I want to go out and express myself every time, do things I know I can do, try to get goals and assists and help the team win. I just want to win all the time. I'm two-footed. If you told me to take a free-kick, I'd use my right foot, but I'm happy on either flank and comfortable using either foot.

Q: Is left-wing your true position? It's where we've seen you most of the time so far.

A: As I say, I can play left or right. Wherever the manager puts me, I'll be happy. I really don't mind. I could play through the middle. I started out as a striker at Leeds. I don't mind playing up front, but my favourite position is on the wing, because I like to get at players and take them on. You can't really do that through the middle. It's more making runs behind a defender than going at them. I like to have a personal battle with the player I'm up against, and I always aim to win at least 60 per cent of it. If it finishes 60-40 to me. that's ok. I always look at whoever I'm up against and try to work out which foot they favour. If it's the right foot, and I'm on the left, I might cut inside, because when you are going into a tackle, you prefer to do it with your stronger foot. I always feel my pace gives me an advantage as well. If I knock it past a defender and sprint, they are not going to be there with me, unless they are very quick.

Q: Could there be goals in the locker as well, if you started out as a striker?

A: I think so, yes. I scored lots as a youngster with Leeds, so I would certainly like to replicate that. I changed to a winger when I was at Forest. Because of my pace, they said they could see me doing well on the wing. It was Gary Brazil, who used to be a winger himself, and Jack Lester who suggested it, and I took to it straightaway.

Q: What have you made of pre-season?

A: I've really enjoyed it. It is different coming from full-time to part-time. You train Tuesday and Thursday, and it's like fitting a double session into one session. It's a lot more demanding, but I feel you get more out of it. When you are full-time, you do a running session on a Monday and another on Tuesday, and there's time to recover, but when it's only Tuesday, you get that longer session, and it impacts more on your body, which I feel can be beneficial.

Q: What happened when you went to Brentford on trial the other week?

A: Well, actually, it was Barnet, not Brentford! When I was at Leeds, there was a coach called Junior Lewis, who was assistant when Dave Hockaday was in charge, and he said: 'I see you have left Fylde - do you want to come here for a trial?' I was happy with the way things were going here at Alty, so I ummed and ahhed a bit, but he said: 'I can sort you out here', so I thought I'd give it a go. It went really well, but I just thought 'I can't travel this distance.' It was three-and-a-half hours. It would have meant relocating, and I didn't fancy that. I'm based in Leeds with my girlfriend and two kids, and I didn't want to uproot them all. The journey over to Alty is nothing, but three-and-a-half hours each way would have been a bit much!

Q: How difficult is it being on trial and knowing you are effectively playing for a place in a squad?

A: I always like a challenge, so that didn't bother me. I always feel that if I'm playing for a position, it brings the best out of me. When people have got no-one challenging them for their place, they get comfortable. They get lazy. I prefer to have the challenge of knowing that if I don't play well, someone will take my place. And I don't like sitting on the bench! I have got to fight for my position, and that is fair enough. That's what I'll do.

Q: Is it fair to say you don't lack confidence?

A: I always try to get on the ball as much as possible. I think people on the sidelines can tell if you don't want it. I have always tried to be a confident player and back myself. If I give the ball away, so what? I will win it back and try again to make something happen. You've got to be confident in football. If you lose the ball and let your head drop, you are not going to get anywhere, are you? I never let it get to me if I lose the ball. I just want it all the more next time.

Q: Did you know much about Alty, prior to arriving here?

A: I was at Fylde with Ash Hemmings, who was here on loan last season, and he told me plenty about the club. When he came back to Fylde, he kept saying what a good club Alty were. Then, when I told Fylde I wasn't staying, I got to hear that the Alty manager was interested. Ash told me this was a good club that played good football, so I thought let's give it a go. It is a club on the up, and I would love to play a part in maintaining that.

Q: Do you know much about the players?

A: I didn't, but I feel like I do now! They have been very welcoming and made me feel at home. Once you get into a group, if you fit in well, it has to help. It's great to see that togetherness. It's what you need in a squad. You all need to be on the same wavelength. They are all good lads in different ways. There is plenty of banter flying around. It's a good environment. It's healthy to have that in a squad. You get lads like Tony Thompson who are a bit louder than everyone else, but it's good to have characters like that, bouncing off each other.

Q: Do you think the manager's style will suit you?

A: Yes, down to the ground. His style of play is mine as well. He has a work ethic as well, but I've no problem adapting to that. Tracking back is no problem for me. I have always done that, because I don't like people getting the better of me. If I lose possession to someone, and he gets the ball in and helps his team score, that's 1-0 to him, and I'm not having that.

Q: The fans here love a winger - is that an extra incentive for you this season?

A: After every game so far for Alty, I have heard fans saying 'Well done, Lewis - you've played really well.' I've also seen posts on twitter, saying Alty should sign Lewis, and it is nice to see things like that from the fans. I always like to connect with fans, and I will be doing everything I can to do that here. My promise to Alty fans is simple: I will work hard. If I work my backside off for 70 minutes, but that's all I can give on the day and I'm taken off, I'd rather have that than coasting through for the whole 90 minutes without giving my all.

Q: Are you confident we're in for a good season?

A: The way pre-season has gone, playing tough teams like Blackpool and Fylde and doing really well against them, I feel we are. We should have nothing to worry about. If we play like we can, we can beat anyone in this league. I'm really looking forward to it, and I'm confident about what we can do.