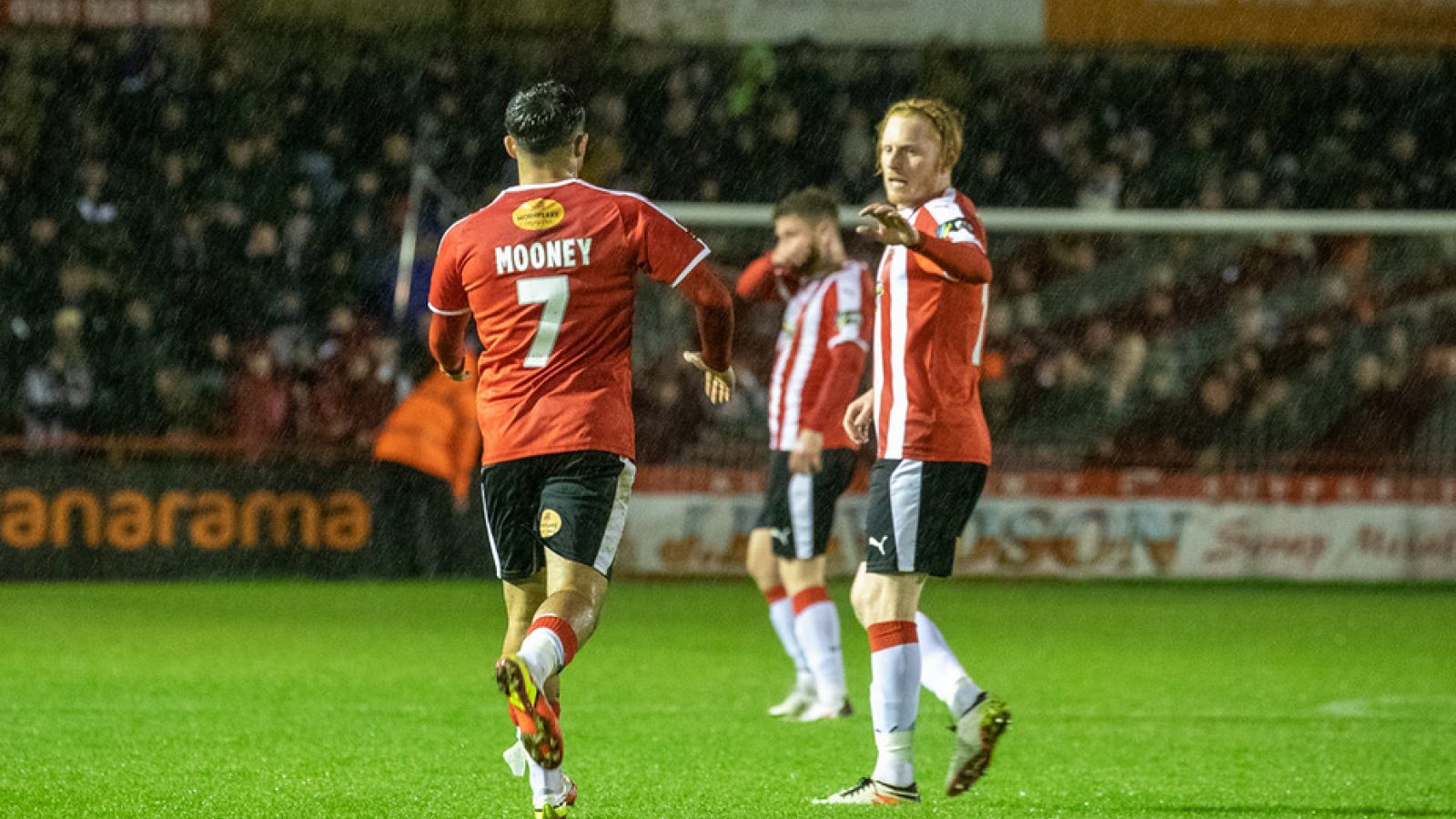 The Robins will be looking to get back to winning ways this weekend as Maidenhead United make the long journey north to the J. Davidson Stadium.

After impressive wins against Notts County, King’s Lynn Town, and Dagenham & Redbridge, Alty were unable to pick up their fourth win on the bounce as table-topping Grimsby Town secured a 3-2 win in front of almost 3000 spectators.

The Mariners took the lead after 27 minutes when Coventry City loanee Will Bapaga fired Ryan Taylor's pass into the roof of the net. That lead was then doubled by Taylor shortly after the restart.

Grimsby were on top and with 55 minutes on the clock they had a third when Harry Clifton finished smartly. However, things soon started to turn sour for Paul Hurst’s side.

After being reduced to ten men when Bapaga was shown a second yellow card, Alty finally made the breakthrough when Dan Mooney’s shot proved unstoppable for the visiting ‘keeper.

Memories of that heroic comeback against Dagenham last weekend were soon coming back when Jake Moult reduced the Grimsby lead to one with 15 minutes left to play, following a close-range finish.

However, Phil Parkinson’s side were unable to find that all-important equaliser, suffering their first home defeat of the season.

You can watch the highlights of that 3-2 defeat by pressing play below.

Following that result, The Robins drop to ninth in the Vanarama National League table, seven points ahead of Maidenhead United in 17th, having played one less game than Saturday’s visitors.

This is the first ever meeting between the two sides with fans in attendance. Ryan Colclough’s freak goal straight from a corner just past the hour was enough to secure Phil Parkinson’s side all three points at York Road in front of the BT Sport cameras in March when the two sides last met.

Altrincham had the better of an uneventful first half, with Colclough seeing an early effort saved by Taye Ashby-Hammond.

The visitors then squandered a golden chance as Josh Hancock saw a shot well saved by Ashby-Hammond, Colclough crashed his follow-up attempt against the bar and a third effort from distance flew over.

Colclough broke the deadlock after the hour mark when his low delivery from a corner caught the Maidenhead defence cold, with the ball sneaking in at the near post.

Ryan Upward headed narrowly wide for the hosts, before bringing a fine save out of Tony Thompson with a fierce volley, but Altrincham held out.

Founded in 1870, Maidenhead United came within a whisker of relegation to the NL South at the end of the 2019/20 season, but Macclesfield Town’s demise and the Covid pandemic, which brought lower league football to its knees, saw The Magpies reprieved.

With a clean slate and a motivation to steer clear of such troubles the following year, Maidenhead impressed many by keeping firmly in touch with those play-off chasing teams, only to fall short after a disappointing end to their campaign.

Hopes of another push for promotion have been firmly put on pause after a disappointing start, with The Magpies winning two, drawing two, and losing five of their nine league games. What will be of concern is that they are currently winless in seven, having picked up maximum points from their first two games.

Much has changed for Saturday’s visitors this time around, notably in the striking department. After losing Danilo Orsi-Dadomo to Harrogate Town, a man who scored 18 goals for the club during the 2020/21 campaign, Alan Devonshire brought in Emile Acquah (ex-Southend United) and Dylan Asonganyi (ex-Oxford United) to fill the void.

However, it has been the midfield duo of Sam Barratt and Kane Ferdinand that has kept the club competitive in every game so far this season. Accounting for six of the club’s 11 goals, Barrett and Ferdinand have been in fine form and will likely play an influential role in where the club is sat come May.

In their last game against Yeovil Town at Huish Park, the visitors, who finished the game with ten men, were held to a goalless draw, extending their winless run to seven at the same time.

The Magpies started brightly, with Barratt seeing his effort cleared off the line by home defender Max Hunt, before Tom Knowles and Joe Quigley were wasteful with opportunities in front of goal.

On the hour, Maidenhead goalkeeper Rhys Lovett made an instinctive save as a free-kick from Yeovil’s Dale Gorman looked to be heading for the back of the net.

The task of turning their run of form around was made all the more difficult when in the 71st minute, midfielder Jay Mingi was sent off for a second yellow card.

It almost cost them dear in the closing stages when Charlie Wakefield did excellently to beat three Maidenhead players before picking out Knowles, whose first touch let him down while bearing down on goal.

However, they were able to hold on to secure a draw, a result which helps close the gap between themselves and Yeovil in 14th to two points.

Our visitors are managed by Alan Devonshire, who took over in 2015, replacing previous manager Johnson Hippolyte. Before managing Maidenhead, Devonshire had coached Braintree Town.

As a player, Devonshire led West Ham United to FA Cup success in 1980 setting up Trevor Brooking who stooped to head the only goal of the game in the final against Arsenal at Wembley..

In total, the current Maidenhead manager made 358 appearances for the London-based club, scoring 29 goals before securing a move to Watford in 1990. After one goal from 25 games for the Hornets, the midfielder dropped out of the Football League and tried his luck as a manager, linking up with Chippenham Sports as a player/coach.

Spells coaching at Osterley and Brentford Women led to Devonshire’s first spell in charge of Maidenhead in 1996. Seven seasons at York Road ended when he took over the reins at Hampton & Richmond Borough, leading the club to the National League, before joining Braintree Town in 2011.

After four years in charge of the Essex-based club, he returned to Maidenhead and has converted the club from a mid-table National League South side into one with an eye on promotion to the Football League.

A win for Altrincham on Saturday could lift the Robins up to sixth in the Vanarama National League table, while a win for Maidenhead United could move The Magpies to 14th, four points clear of the relegation zone.

*Unfortunately, Connor Kirby will be unable to attend Saturday’s fixture as previously advertised. However, he remains very interested in expressing his thanks in person and we have agreed to reschedule his visit to the J. Davidson Stadium in the near future.

The broadcast starts at 2,45pm