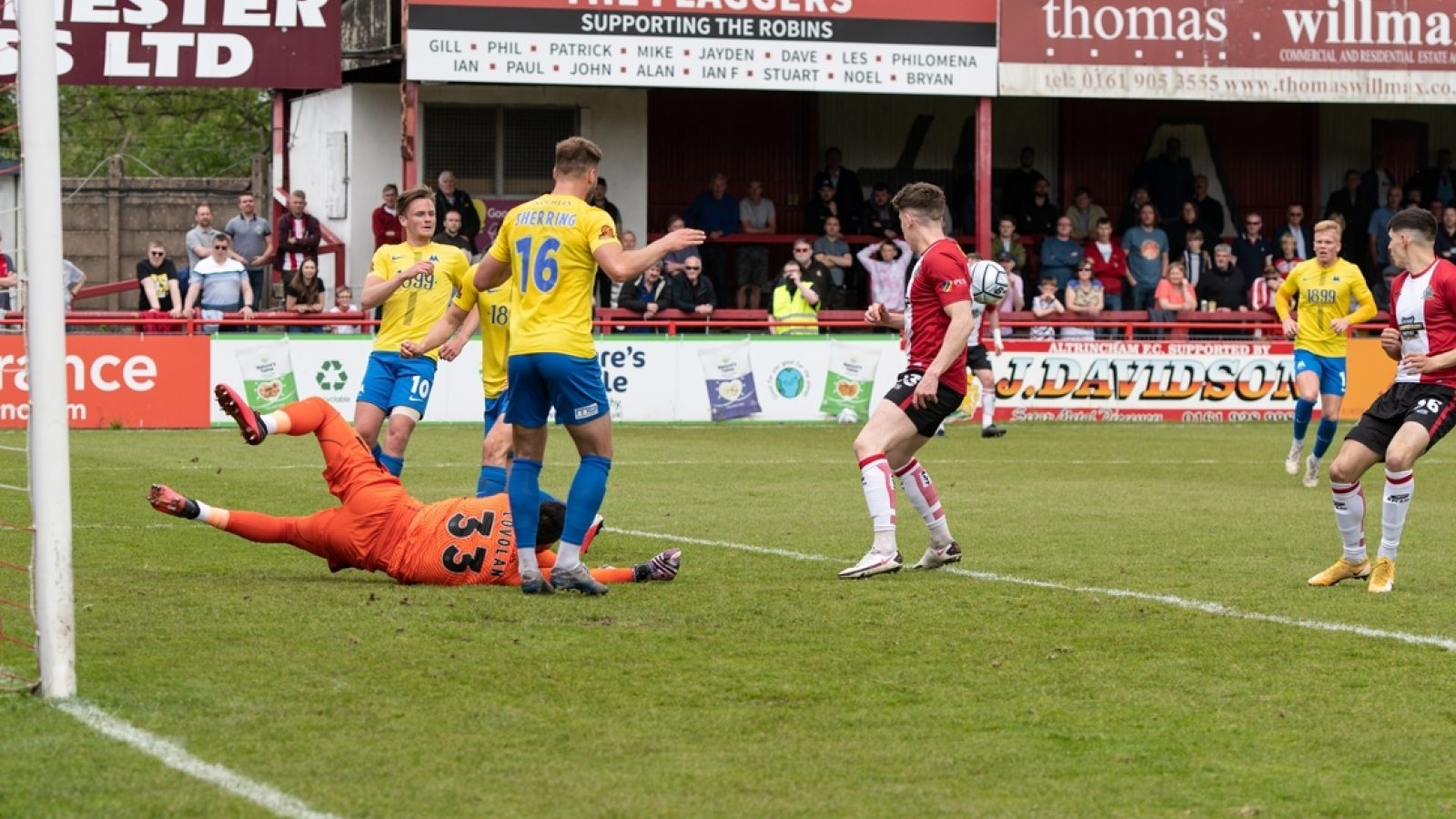 Altrincham finished the season as they started it with a 0-0 draw at The J.Davidson Stadium against a team from the South West.

Conditions on the final Saturday in May were markedly different from the October splashfest against Weymouth as the crowd of 1032 basked in glorious sunshine & watched the Robins & the Gulls each take a deserved point in a competitive end of season encounter that was short on goalmouth action but enjoyed by the faithful Alty fans, clearly delighted to have 3 opportunities in the final week of the season to see their favourite team after a 14 month absence from the terraces & stands.

Before the game, Altrincham unveiled new signing, Brad Jackson, who joins the Robins from Chester & Co-Chairman, Bill Waterson, announced a 'Role of Honour' for all of the people connected with Altrincham Football Club who have sadly passed since the beginning of last year.

Altrincham FC 'Role of Honour' for the people connected with Altrincham Football Club who have sadly passed since January 2020.

Gary Johnson opted to field a strong side, even though his side were guaranteed to finish as runners up to Champions, Sutton United, but it was the home side that were quickly out of the blocks, with Dan Mooney particularly lively early on.

The Devon side found their feet after 10 minutes or so & put the Robins under a fair degree of pressure, without really creating any clear cut chances & the highlight of the first half was a fine effort from outside the penalty area from Alistair Smith that brought an acrobatic save from Lucas Covolan who did well to hold on to the ball.

Lucas Covolan holds on well to this fine effort from Alistair Smith.

The second half continued in a similar vein, although it was the visitors who went closest to scoring with a looping Kyle Cameron header from a corner that was headed off the line by Jake Moult.

Adam Randell also nearly broke the deadlock but his header was marginally off-target.

Alty were threatening on the break but in general both defences were fairly comfortably in charge of the opposition attacks & there was a sense that a point was a satisfactory outcome for both Phil Parkinson & Gary Johnson.

The opening & closing matches of this campaign have been the first matches at The J.Davidson Stadium without a goal in the 4 seasons that Phil Parkinson & Neil Sorvel have been in charge. The only previous scoreless games came in the 2017/18 season at Stalybridge Celtic, 2 games at Warrington Town (Northern Premier League & FA Trophy) & at Buxton.