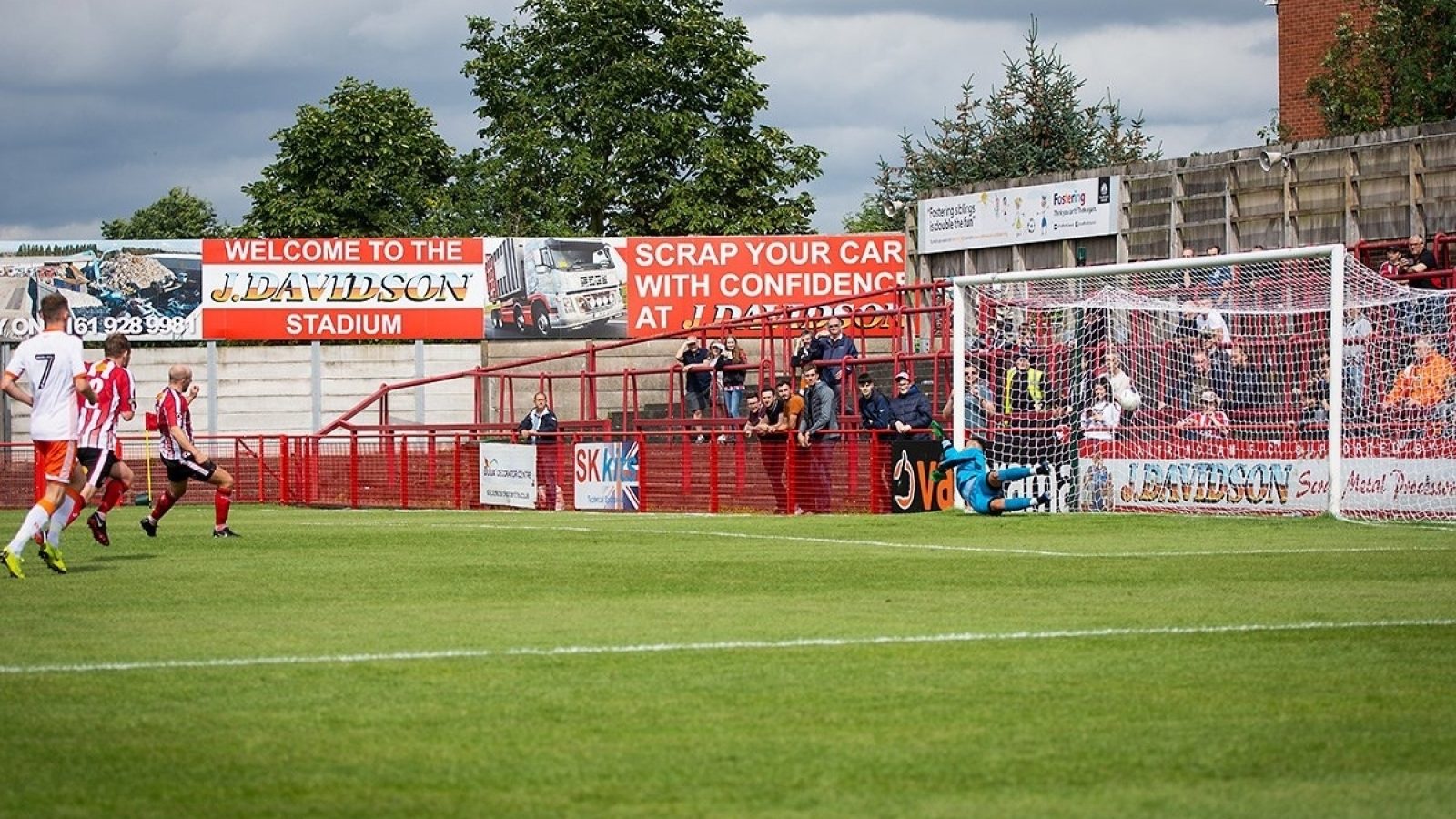 *Spot on ... Matt Chadwick makes it 2-1 to Alty with an unerring penalty

Altrincham’s fifth pre-season friendly ended with a 2-1 win over Blackpool on Saturday afternoon, with goals from Lewis Walters and Matt Chadwick.

Following last Tuesday’s 2-2 draw with Atherton Collieries, the Robins started the game well. Keeper Steven Drench - returning from injury - was brought into action early on, when Blackpool’s Adi Yussef drilled an effort at the shot-stopper.

The visitors took the lead in the 23rd minute, when ex-Carlisle man Jamie Devitt fed a low driven pass across Drench’s goal for Ben Toillit to tap in.

Alty grabbed an equaliser 13 minutes later through a Walters header - this coming after some excellent play down the right from Chadwick, whose trickery and cross found the former AFC Fylde forward.

The Robins took the lead four minutes after that from the spot, following more great play by Chadwick, who was hauled down from behind after bursting into the box.

Chadwick picked himself up to convert the resulting penalty with a powerful kick high to the keeper’s right, and the half-time whistle blew with Phil Parkinson’s men going in with a deserved lead.

The second-half saw Alty make one change, Tony Thompson coming on for Drench, who had made an encouraging return to action after recovering from injury.

Parkinson was forced to make another substitution 12 minutes later, when Walters went down injured and was replaced by Nathan Arnold.

A flurry of changes on the 63rd minute saw the rest of the Robins bench take to the field, in the form of Max Harrop, Tom Hannigan, Toby Mullarkey, Jordan Hulme, Dontai Gabidon, Conor Branson and Andy White.

This led to a change in formation for Alty, converting to a 3-5-2, but it made no difference to their attacking intent, with Harrop trying his luck from distance on several occasions and bringing the best out of the Seasiders keeper.

Blackpool had their fair few chances in the last quarter of the second-half, ex-Robins loanee Yusifu Ceesay working hard to get the visitors level.

The final few minutes almost saw Blackpool escape with a draw after an inswinging free-kick was deflected just over the bar by the straining head of an Alty defender.

Altrincham thoroughly deserved their victory, though, and continue their pre-season campaign on Tuesday evening, as they face last season’s National League North champions Stockport County at The J.Davidson Stadium.