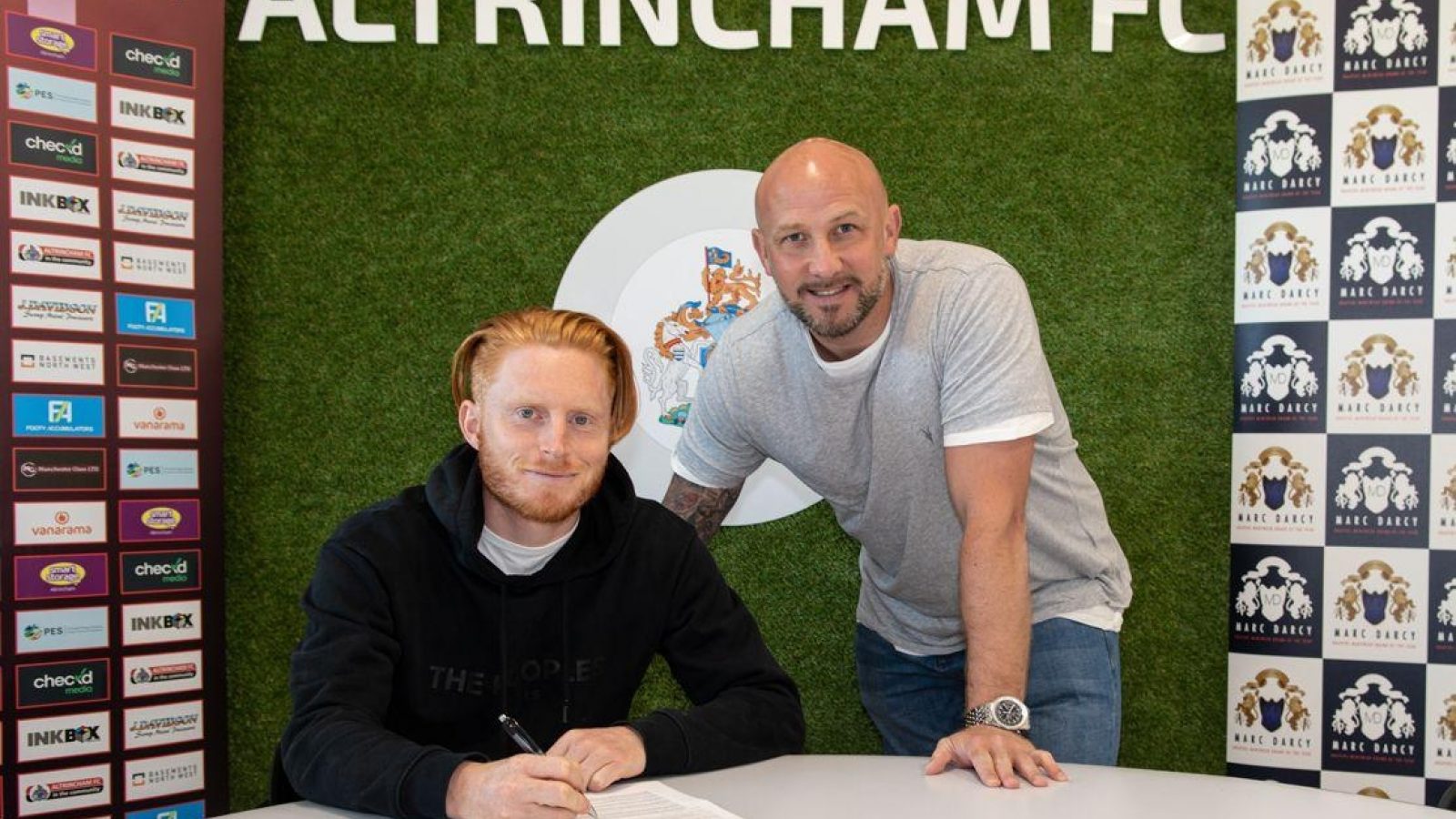 *Top signing .. Ben Pringle adds his name to Alty's squad for the new season under the approving eye of Phil Parkinson. Picture by Michael Ripley.

An all-action midfielder with a wealth of Football League experience, Pringle completed a move that is subject to FA and National League approval at The J.Davidson Stadium last night after impressing in the Robins' pre-season programme.

After already reinforcing Alty's defence with Kennedy Digie and David Fitzpatrick, wide areas with Brad Jackson and forward line with Marcus Dinanga, Robins boss Parkinson was delighted to bolster the engine room with a player of Pringle's pedigree.

'Ben's acquisition will add vast experience, creativity and quality,' said Phil, who has also bolstered the midfield with the loan signing of Connor Kirby. 'He's proven and still hungry, and he wants to help us achieve our goals. I'm really looking forward to seeing him in Alty colours in the National League.'

The Whitley Bay-born midfielder, who turned 33 last week, started out at the renowned Wallsend Boys Club, a youth set-up famous as a launch pad for the careers of England stars such as Peter Beardsley, Alan Shearer and Michael Carrick, and began to make a name for himself after joining Derby from Ilkeston Town in July, 2009.

He captained Derby's Reserve side to the Central League Central Section title the following season, being named the club's young player-of-the-year in the process and earning a first-team League debut in the final game of that campaign, as he helped the Rams to a 2-0 win over Cardiff City with a performance that brought him the supporters' man-of-the-match award.

After 20 appearances for Derby, he switched to Rotherham United in June, 2011 and stamped his mark on their fortunes by driving them to two successive promotions from League Two to the Championship, winning a place in the League One PFA team-of-the-year after the second one in 2014.

After continuing his fine form for Rotherham in the Championship, he attracted a bid from Millwall but turned down the move after the clubs had agreed a fee in January, 2015.

He did, however, accept the offer of a two-year deal at Fulham the following June, moving to Craven Cottage after 147 appearances and 19 goals in Rotherham colours. A move to Preston followed on a three-year contract for an undisclosed fee in July, 2016, and he had spells with Gillingham and Morecambe before arriving at Alty for the build-up to this coming season.

A dynamic, creative and committed central midfielder, he has had a distinguished career - and has already made it abundantly clear to Phil and his coaching staff that it's far from over. An unshakeable belief he still has plenty to offer has shone through in Alty's pre-season games so far, and everyone at the club wishes him a successful stay at The J.Davidson Stadium.

*Press and media officer Brian Flynn and Alty TV's Mark Bennett conducted an interview with Ben shortly after he signed last night. Brian asked the questions, while Mark did the filming, and the interview should be here on the club's website later this afternoon, at about 5pm.