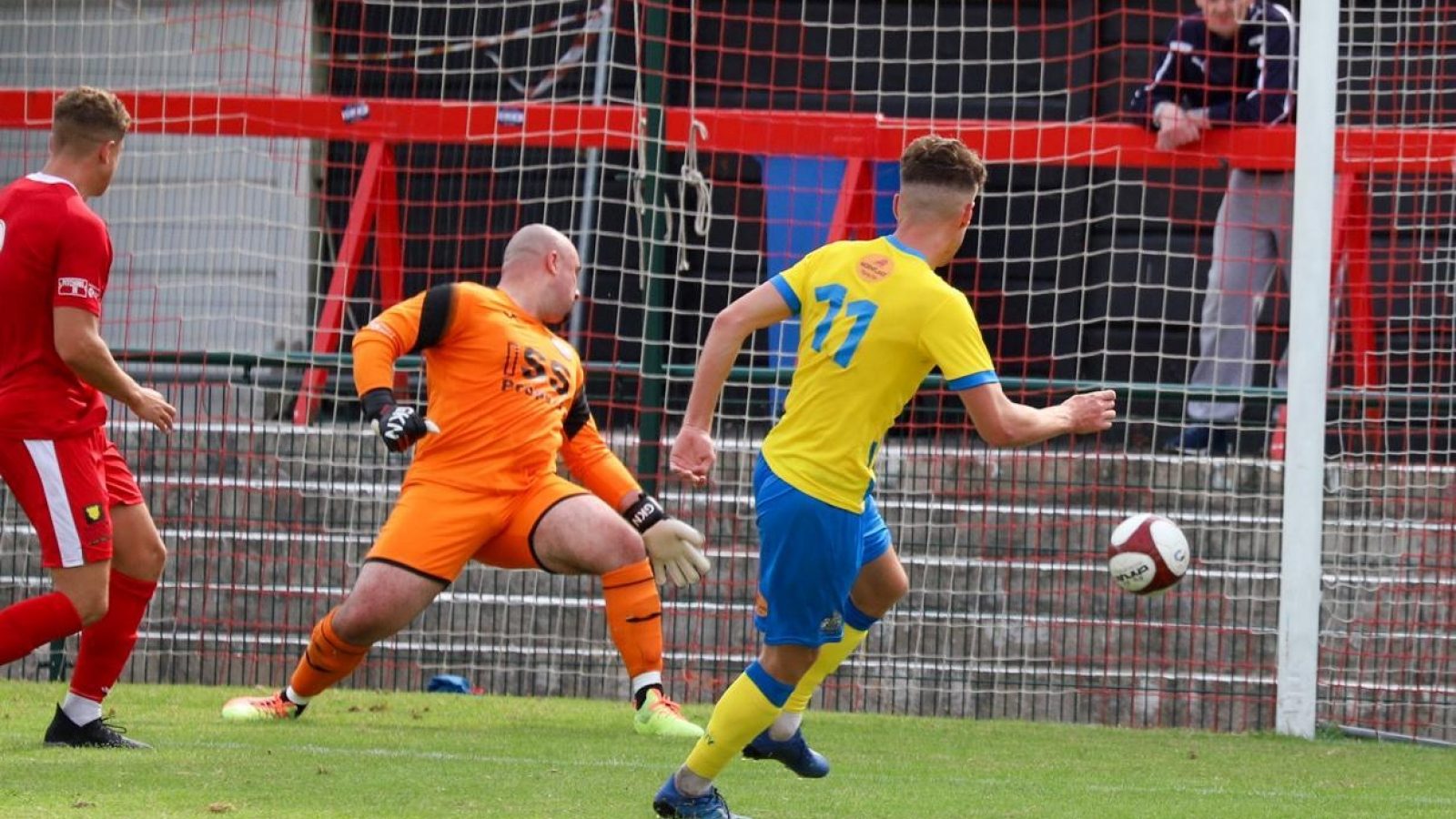 Dan Mooney finished expertly and Ryan Colclough crowned a man-of-the-match display of wing wizardry with a second goal as Altrincham cruised to a comfortable 2-0 win over Ashton United at Hurst Cross.

Manager Phil Parkinson, hot-footing it from West Didsbury after running the rule over recent signings and trialists in the earlier friendly, fielded a starting Xl packed with regulars from last season’s Vanarama National League campaign.

Trialist David Fitzpatrick filled the left-back role, but it was otherwise a line-up full of familiar faces, and how it showed as they began with a cohesion that came from knowing each other’s game inside out.

Alty were impressive from the first whistle, settling into their usual slick passing style of play and soon piling pressure on the Ashton defence.

Jake Moult and Sean Williams ensured a steady supply of possession for the Robins, while Colclough, Matty Kosylo and Mooney tested the home defence with their direct running and Josh Hancock, wearing nine, showed his eye for goal with a sidefoot shot that forced a diving save from Greg Hartley after an impressive left-flank build-up.

It was pretty much one-way traffic, with a rock-solid centre-back partnership of Tom Hannigan and Toby Mullarkey keeping the home side at arm’s length on the odd occasion they threatened and limiting opportunities in the first half to an effort from Jack Redshaw that floated narrowly wide.

It came as no surprise, therefore, when Alty went ahead through Mooney in the 18th minute, though there was a moment of uncertainty over whether a foul might be given for a collision involving Harry Coates, as the ball bounced through towards the edge of the Ashton area.

Mooney’s only thought was seizing the opportunity that suddenly presented itself, and he did it with aplomb as he measured a lob over the advancing Hartley to perfection and turned to take the congratulations of his team-mates.

Referee Marsden saw nothing untoward and awarded the goal, though the clearly dazed Coates had to be helped off and substituted after having a head wound bandaged during a lengthy stoppage for treatment.

After showing up well enough on the left of Alty’s back line, Fitzpatrick was replaced by another trialist, Alex Brown, for the second half, and the former King’s Lynn Town defender did his prospects no harm with an energetic, forceful contribution in the same left-back role.

With Connor Hampson and Andy White both nursing injuries, it was no surprise the left-back position came under scrutiny on Saturday, with another trialist, Junior Brown, showing what he can do in the game at West Didsbury.

'I think everyone is aware that Connor and Andy are not going to be fit for the start of the season, so that is an area of concern at the moment,' said assistant-manager Neil Sorvel. 'Junior played in the first game at lunchtime, and David and Alex had a half each at Ashton, and I think they all acquitted themselves pretty well, so there is some thinking to do and decisions to make sooner or later.

'I thought we were outstanding for 30 minutes against an Ashton side you would expect to be up there in the Northern Premier League this coming season. We totally dominated and controlled the game and looked two levels above them.

'A little bit of sloppiness crept in at times towards the end of the first half, but we started the second half well and created chances, and I thought overall it was an enjoyable game to watch.'

Colclough continued to take the eye in the second half, and there was no stopping Alty’s flying winger as he doubled their lead.

Cutting in from the left, an initial attempt was blocked, but it was only a temporary reprieve for the home team as, with typical persistence, Colclough continued his diagonal run and buried the ball into the bottom corner at the second attempt.

Hartley had been the busier keeper, but Thompson provided a reminder of his outstanding shot-stopping capabilities with a brilliant one-handed save, low down to his left, as Ashton tried to find a way through.

Fisayo Adarabioyo went on, as Parkinson rang the changes, and did his hopes of a place in the squad for the new season no harm with some lively frontrunning that included an  angled effort that went just the wrong side of the far angle of bar and post.

Alty kept up the pressure and should have gone further in front when another second-half substitute, Tom Peers, won a penalty after riding one illegal challenge with commendable strength and resilience but falling to the ground after another, this time from Hartley as the striker rounded Ashton’s keeper.

It was a clear spot-kick and Peers struck it well enough, directing it firmly towards the left corner of the net, but Hartley was equal to it with a full-length dive and outstretched hand to tip it round the post.

It was unfortunate for Peers, who deserved a goal for his lively input, but it hardly mattered. Alty were up and running, and while no-one doubts the need for further reinforcements, there was clear evidence that those who remain from last season are in the mood to make their mark in the coming campaign.