Morton on the mark with late winner as Alty boys reach last eight! 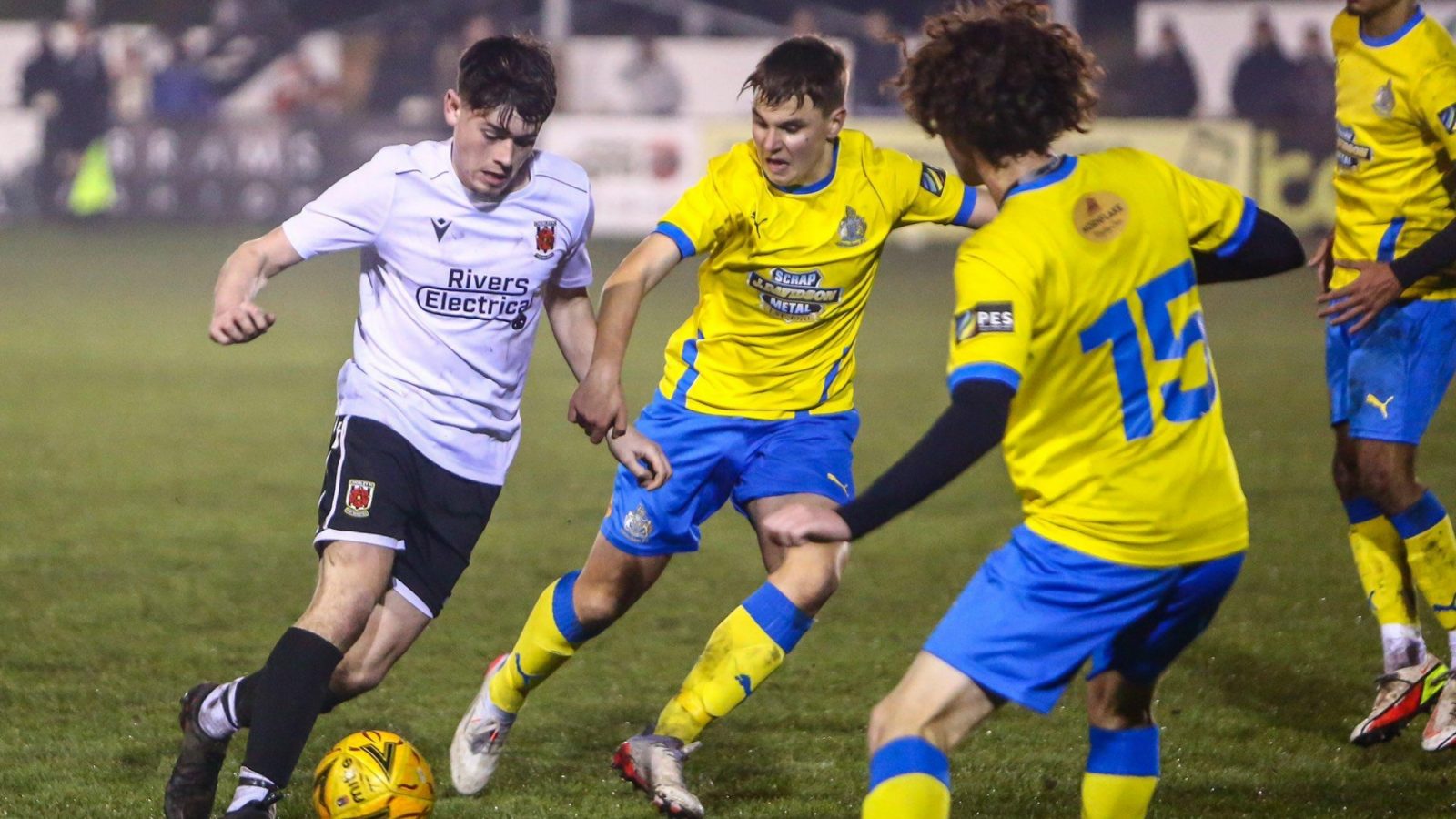 *No way through .. Alty repel a Chorley attack on their way into the quarter-finals.

It was a lot closer than the previous encounter with Chorley, but Altrincham's National League squad showed they can hold their nerve and dig deep when need be at Victory Park last night.

With a place in the last eight of the National Youth Alliance League Cup at stake and the chance to restore pride spurring them on, Chorley were a different proposition from the side dismantled 8-1 by a rampant Robins at Manor Farm a week earlier.

They even recovered from conceding an early goal to lead 2-1 late in the first half, as Alty's youngsters were made to battle for the prize of a quarter-final place.

But resolve and resilience figure prominently on this young Alty side's list of qualities, and an immaculate sense of timing can't be far behind after the way they drew level just before half-time and made it 3-2 with a dramatic winner a couple of minutes from the end.

Under the Victory Park lights, the tie began at a lively pace, as both sides made inroads without managing to test the keeper.

That soon changed, as Alty took a 12th-minute lead with a rapid and perfectly-executed counter-attack. After successfully defending a corner, the Alty boys  broke quickly and set up a chance that Tom Jones finished with aplomb.

Credit to Chorley's players for keeping their heads up in the face of that setback, and they were back on terms after 25 minutes with a straightforward finish from inside the area.

The equaliser seemed to rattle the visitors, and there was some concern in the Alty camp, as Chorley began to get on top and started wining a lot of second balls in the centre of the pitch.

It led to a second Chorley goal in the 30th minute, as a long ball in behind the Alty back line was picked up on the right and crossed into the box for the Magpies centre-forward to blast past keeper Ryan Forde.

Trailing 2-1 to opponents so ruthlessly taken apart only last week might have been a shock to the system for the young Robins, but they soon shrugged it aside shortly before the half-time whistle.

A great corner-kick delivery from Amaar Hussain had Chorley's defence struggling to cope, and when the ball broke to Liam Evans, he poked it into the net to ensure Alty went in all-square at 2-2.

It's always good to score just before half-time, as they saying goes, and Alty looked a side benefitting from renewed confidence at the start of the second half.

Dominating possession, and with Jones getting the better of his full-back and delivering dangerous balls into the box, Chorley were coming under mounting pressure.

For their part, the Magpies were sitting deep and relying on the odd counter-attack for a way of stemming the tide and troubling Alty at the back.

Alty stuck with the game plan, started moving the ball quicker and began creating more chances, with Hussain being denied by a great save from the home keeper after being presented with an excellent opportunity.

A penalty shoot-out loomed ever closer and looked the only way of separating the sides, until Alty were awarded a free-kick just outside the box in the 88th minute.

One last chance to settle it, and Alty grabbed it with both hands as Owen German delivered a pinpoint ball to the back post, where Ryan Morton gleefully headed it unerringly into the back of the net.

Five additional minutes enabled Chorley to make a couple of substitutions and throw everything at Alty, but the resilient young Robins held out to book their place in the last eight.

"With the Academy not even going two years yet, this has been a great indication of how far all the players have come on in this time," said a delighted Senior Academy coach Paul Fay.

"It’s fantastic to see players coming from the junior set-up into the Academy, with Tom Jones being one of them. Tom started at the club by attending Saturday Soccer Club at under-7s and has come through the development squads at the junior club.

"That's what we want to see - homegrown talent being developed - and let's hope there is more of the same as we move forward.”

Next up is yet another meeting with Chorley, again away but this time in the return league fixture next Wednesday. The AOC squad meet Stockport FC.