Now let's get a run going, says Phil, after character wins the day at FC United 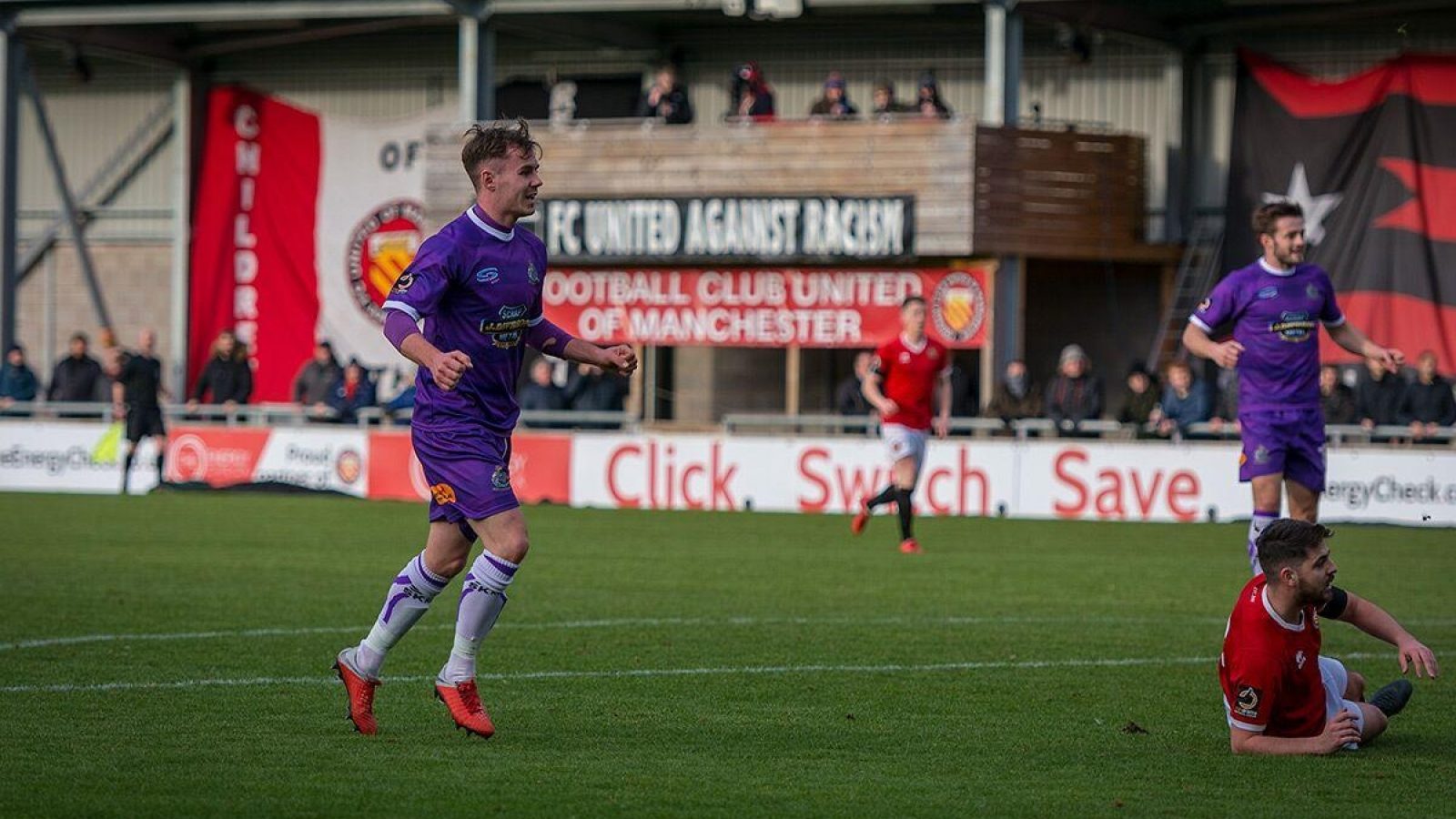 Phil Parkinson saluted the character of his Altrincham players after they took a string of injury setbacks in their stride to record their first-ever win over FC United of Manchester at Broadhurst Park on Saturday.

The tone was set inside the opening minute, when left-back Connor Hampson succumbed to a badly bruised hand, and there were real concerns in the Alty camp before half-time, when centre-back Ben Harrison suffered what looked like a recurrence of knee ligament damage and had to be stretchered off.

Finally, on-loan forward Nathan Waterston was left hobbling after an injury-time challenge, but, by then, Alty were closing in on a 2-1 win that kept them in seventh place and banished the memory of a 3-0 defeat at Leamington a fortnight ago.

‘The players showed an abundance of character and a real desire to win the game, and that’s what got us over the line in difficult circumstances,’ said Alty boss Parkinson. ‘We had to contend with the injury disruption, for one thing, and FC United’s equaliser could have flipped the game on its head.

‘Their crowd are a massive part of what they are about, in terms of building momentum, but our lads weren’t having it. They stuck to their guns, got their noses in front again and saw the game out, and full credit to them for coming to an intimidating environment and standing up to it so well. It showed real character and was just the response I was looking for after Leamington.

‘It’s so important now to consolidate this win and get some real momentum going. We’ve got to build some consistency. We can’t be up and down, or we won’t make the play-offs, so we’ve got to get into a rhythm.

‘We’ve got a tough month coming up, and the aim has to be to keep the back door shut as well as maintaining our goalscoring ratio. That’s one of the reasons why Steven Drench is here. You could see the quality of his distribution, feathering passes just out of reach of their full-backs and into the path of our wingers. It was absolutely spot-on.

‘What a shift from young Joe Piggott up front, as well. When you talk about scrapping it out, that’s exactly what he did with two very fit and athletic centre-halves. He never gave them an inch all afternoon, and it was a great battle.

‘I thought John Johnston was a real shining light. That was him back at his best, travelling with the ball and posing a real threat.

‘We should probably have been home and dry by half-time, but we still did enough to warrant the points and become the first Alty side to beat FC United. That’s another milestone in the bag for the players, a real feather in their cap, and I hope it sent our supporters home with a smile on their face.

‘It was some strike by Andy White to settle it. It may have taken a deflection, but it was flying in, anyway, and was his goal. He deserved it, too. I’m running out of superlatives for Andy, and I hope Alty fans can see what I’ve always known, that we’ve got a top, top full-back in the red and white stripes.

‘It’s just unfortunate the injuries overshadowed what was a must-win game for us. Connor damaged his hand, and we’re just hoping it’s not a break, and it’s not looking great for Ben, which is such a shame. It’s the same knee as before, and it’s just gone underneath him.

‘We wish him all the best and will do everything we can to help him get back on the pitch. He was one of the best players in an Alty shirt last season and carried us at times, and we’re all so sorry this has happened after he has battled his way back to fitness and started looking like the Ben of old. It is such bad luck.

‘Then, just to confirm it was one of those days, Nathan ends up hobbling with a knee injury. It doesn’t look great for him, either, because as we speak, just after the game, he can’t put any weight on it.

‘But that’s why we have put together a squad with strength in depth. Shaun Densmore is ready to come in at full-back, though Simon Richman did ever so well there after going on as substitute and has given me something to think about.

‘I may need to look at the situation in central defence. I know Jake Moult can fill in there very capably if anything happened to James Jones or Tom Hannigan, but I’ll have to give that some thought.’