One more for the road! All you need to know about our last away game of the season 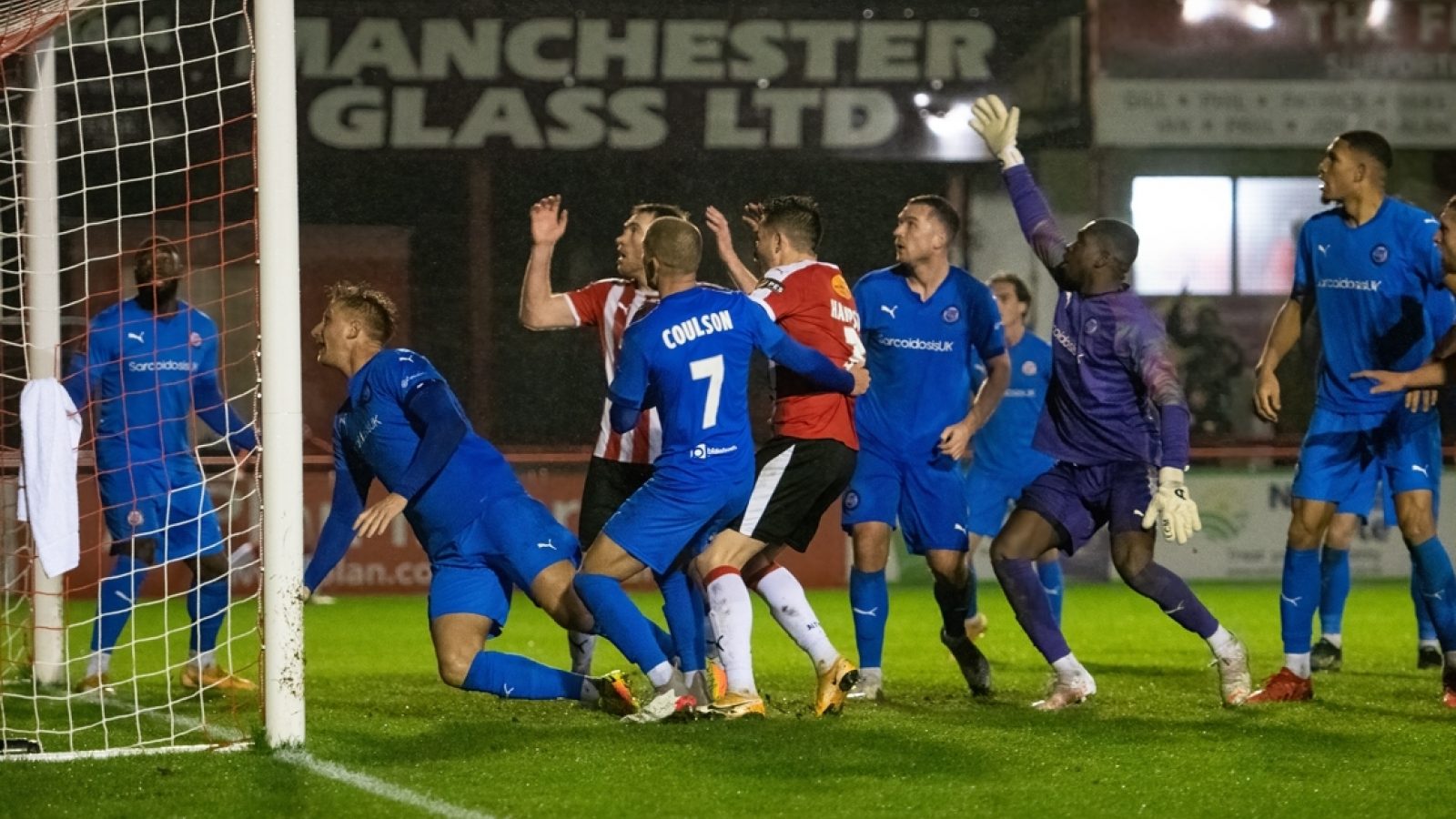 *So close .. a near-miss for Alty in the home game against Bromley earlier this season.

The Robins play their final away game of the Vanarama National League season on Tuesday evening when they take on Bromley at Hayes Lane.

After being held by Barnet at The J. Davidson Stadium last Monday, Alty hit the road to take on Notts County for a third time this season. Unfortunately, despite being level at the break, Phil Parkinson’s side fell to a 3-0 defeat at the hands of the Magpies, who guaranteed a play-off place in the process.

The hosts forced the issue early on and were nearly rewarded for their efforts when Ruben Rodrigues' goalbound cross was tipped over and Jayden Richardson's centre from the resulting corner came back off the crossbar.

County hit the woodwork again on the stroke of half-time when Callum Roberts picked out Kyle Wootton, who could only guide his header off the bar.

The Magpies had their deserved lead straight after the break when Roberts was brought down inside the area before he picked himself up and dispatched from 12 yards.

The hosts grabbed their second with 15 minutes to go when Roberts crossed to Wootton, who lashed home.

County put the game to bed in the 83rd minute when Richardson crossed for Rodrigues to finish with a diving header.

Following that result, the Robins remain 14th in the table, nine points behind Bromley in 11th, having played the same number of games as the Ravens.

This will be the second meeting between the sides this season, with the Robins falling to a narrow 1-0 defeat at The J. Davidson Stadium on December 11th.

The only goal came after 30 minutes when Omar Sowunmi met a free-kick floated into the danger area by Luke Coulson and headed home from close range.

The Ravens caused problems for the home side through Michael Cheek, who made an early opportunity for Corey Whitely and hit the post himself from close range.

At the other end, Josh Hancock's effort was deflected over Reice Charles-Cook's bar, and the miss proved costly as Sowunmi opened the scoring shortly afterwards.

Altrincham pressed for an equaliser and almost got it when Ryan Colclough cut inside, but his low effort was well saved, and Ben Pringle, Connor Hampson and Marcus Dinanga also missed from close range as the hosts piled on the pressure.

However, the visitors held on to secure all three points.

You can watch the highlights of that game by pressing play below:

Saturday’s opponents have comfortably established themselves in the National League, following their promotion to this level as 2014/15 NL South champions.

Finishing no lower than 14th across the last six seasons and having narrowly missed out on a place in the top seven, Bromley forced their way into the play-off picture last season.

However, they lost 3-2 at the quarter-final stage to Hartlepool United, the side that eventually triumphed in the final at Ashton Gate.

Despite missing out on promotion in such a painful fashion, Bromley looked set for success this season, with our hosts on Tuesday having reached the final of the FA Trophy, where they will face Wrexham at Wembley Stadium. However, their league form has suffered as a result.

Right in the mix for a play-off place just over a month ago, the Ravens have fallen short of the top seven, with the club now destined for another season at this level. Since beating York City at Hayes Lane in the FA Trophy semi-final on April 2nd, Bromley have picked up only two wins from nine games.

With their attention rightly turned towards the Trophy final on May 22, Andy Woodman’s side will be heavily reliant on the form of striker Michael Cheek, who has notched an impressive 21 goals in all competitions so far this season while strike partner James Alabi has only managed seven (the next highest total).

Trouble is that Cheek has not found the back of the net since Bromley’s 2-2 draw against Weymouth on February 22nd. The sooner he finds form, the better for our hosts on Tuesday. Let's just hope that doesn’t begin against us tomorrow evening.

In their last match against Dover Athletic, Bromley let the lead slip twice late in the game as the Ravens drew 2-2 with their already-relegated guests.

It looked as if the hosts had won the three points when forward Corey Whitely hit the back of the net in the final minute.

However, Collinge was on hand once again with no more than a few seconds left to play to level the score, moving Dover on to one point after a 12-point deduction earlier in the season.

You can watch the highlights of that game by following the link below:

Bromley are managed by Andy Woodman, who took charge on March 29th this year, replacing long-serving manager Neil Smith. Woodman joined the Ravens following a stint with Premier League side Arsenal as their Head of Goalkeeping.

An experienced former professional who featured for 12 clubs during his playing days, the Bromley boss started out with Crystal Palace, before departing for Exeter City in 1994 after failing to make an appearance at Selhurst Park.

The former ‘keeper left the Grecians after only one season, moving to Northampton Town where he became a key player.

After 160 appearances at Sixfields, he bounced around quite a bit, suiting up for Brentford, Peterborough United, Southend United and Colchester United, before a move to Oxford United came about in 2002.

Two seasons at the Kassam Stadium quickly passed before Woodman moved to Stevenage Borough in 2004, followed by short spells with Redbridge, Thurrock and Rushden & Diamonds, hanging up his boots with the latter.

His first coaching role came in 2006 as a part of Alan Pardew’s West Ham United staff, and he duly followed Pardew to Charlton Athletic a year later. He held similar positions under Pardew at Newcastle United and Crystal Palace before striking out on his own as the manager of Whitehawk in 2017.

After ensuring the club’s survival in the National League South at the end of that season, he left the Hawks to assume a position with Arsenal. Since his arrival at Hayes Lane, he has shaped his side into legitimate promotion contenders.

A win for Alty on Tuesday evening could lift the Robins above Yeovil Town and Southend United into 12th, while three points for Bromley could see them leapfrog Torquay United into 10th.

The broadcast starts at 7.30pm.

The commentary team is Brian Flynn and Laurence Howarth