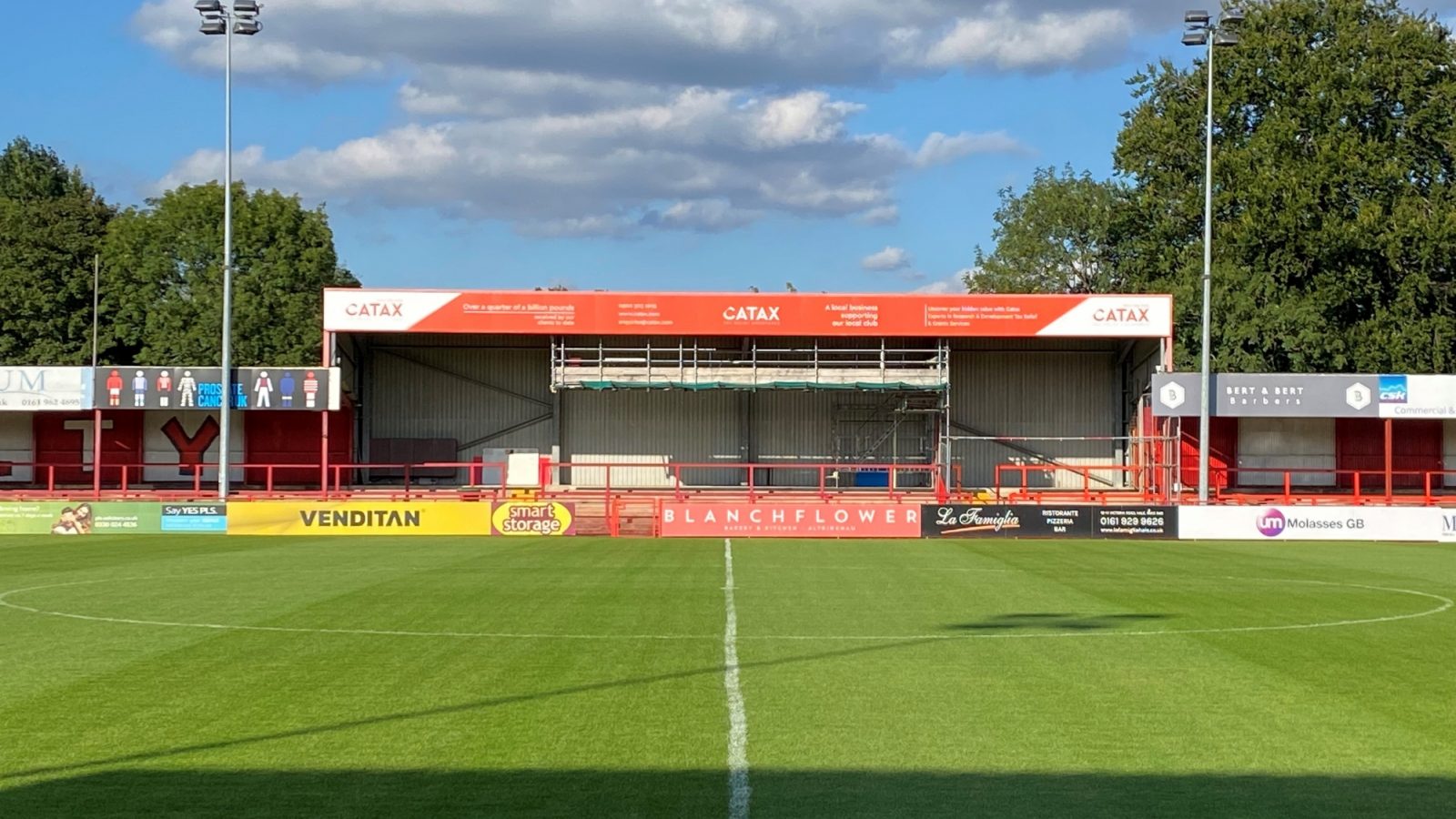 Altrincham's thriving commercial operations continue to go from strength to strength after the Popular Side at The J.Davidson Stadium became the latest section of the ground to attract a sponsorship agreement.

In a welcome expansion of the off-field activities so pivotal to the club's ongoing success, Alty are delighted to announce Catax as the brand new Pop Side sponsors.

Catax themselves are not new to the family of highly-valued Alty partners, of course, after proudly displaying their name across the top of the Golf Road roof last season as official sponsors of that iconic Moss Lane terrace.

But, in the sort of positional change so often favoured in football circles, they have switched from behind the goal to a fresh role on the flank, with their name now having pride of place above the gantry on the Pop Side in a move that further consolidates their backing for the club.

The rapidly-expanding internationally-renowned tax specialists are already major sponsors of the Business Club and are now looking forward to seeing their advertising board make its debut appearance midway along the Pop Side against Notts County next Saturday.

Hailing the agreement as another notable breakthrough, Alty co-chairman Bill Waterson said: 'This is a significant development that takes the Catax Group's support to another level, and we are delighted to be able to confirm it.

'After demonstrating so much faith and belief in our Business Club by getting behind it in such an emphatic manner as major backers, it is fantastic news that they are now adding even more depth to their relationship with us in this way.

'Support of this kind is crucial to our strategy for taking the club forward and achieving our ambitious goals, and, of course, it makes it all the more rewarding when a successful concern with local roots joins us on the journey.

'Catax did that last year, when they began partnering with us, and it's great they are now stepping up their involvement with the club. We thank them for that and look forward to seeing their name emblazoned across the middle of the Pop Side roof at our next game against Notts County on Saturday.'

Though their burgeoning reputation has spread far and wide in recent times, the Group are based only a stone's throw away from The J.Davidson Stadium and have an affinity with the club that was spelled out recently by group sales and marketing director Chris Stanley.

'Catax has always been an Altrincham-based business,' he said. 'We started in King's Court, then moved premises to Goose Green, then on to where we are now, just down the road from the ground, next to Stamford Park.

'Each time we have outgrown our office, we have looked for somewhere bigger, but we have never moved out of Altrincham. So it just felt right to support the club and get involved with what has been a great success story over the last few years.'