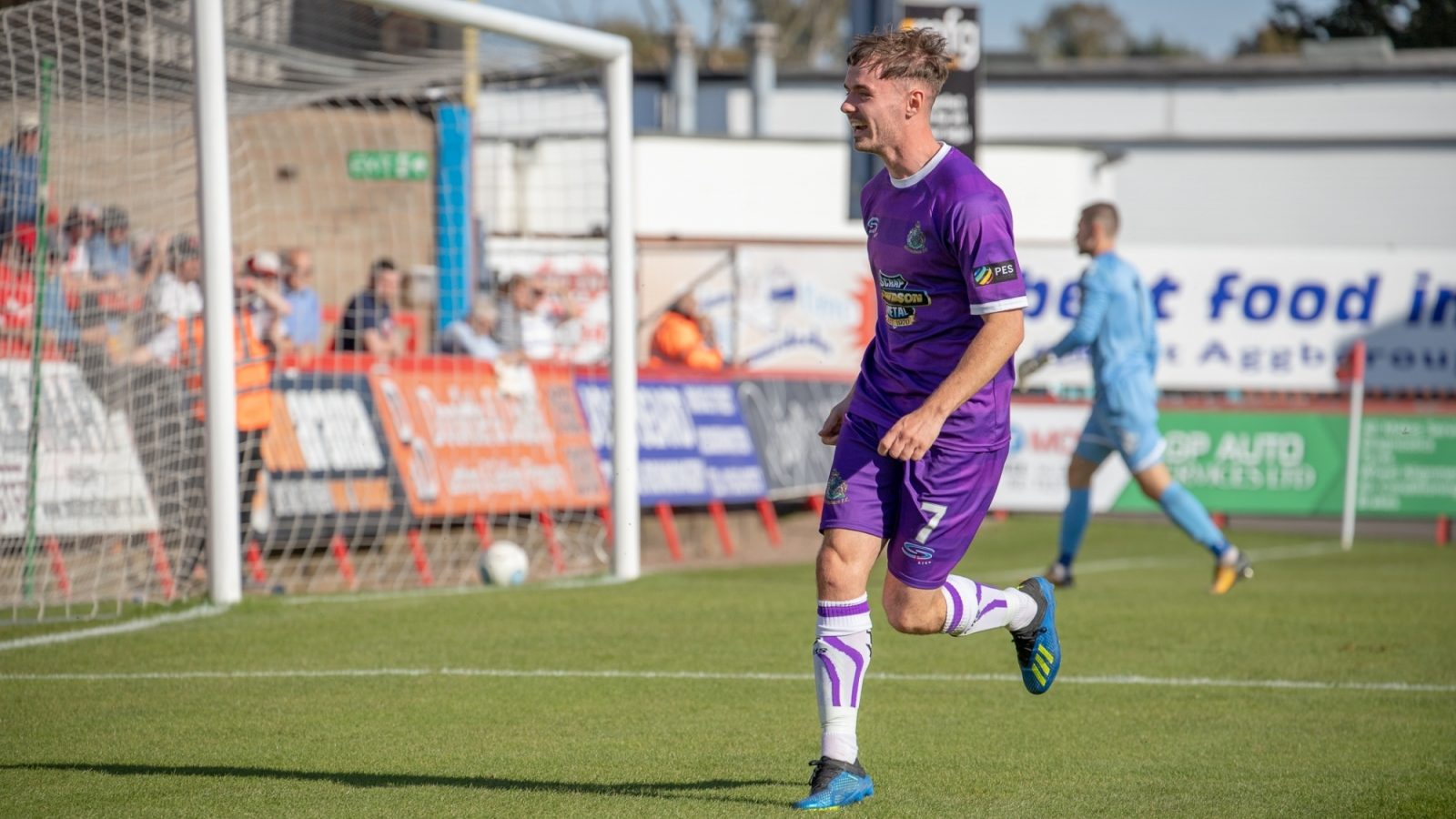 Altrincham were pipped by the post, as well as at it, after a rousing, drama-filled finale came within a whisker of salvaging the point Phil Parkinson’s side so richly deserved at Aggborough Stadium on Saturday.

Trailing 3-2 and already cursing their luck after a string of near-misses and strong penalty appeals that fell on deaf ears, Alty launched one last concerted quest for parity deep into added time.

Shaping to hoist a cross into a packed Kidderminster area from wide on the left, fit-again full-back Connor Hampson instead turned inside his marker and powered towards the box before teeing up a half-chance for Josh Hancock.

An instinctive save by keeper Brandon Hall, who blocked Hancock’s crisply-struck shot with his legs, looked to have dashed any hope of a last-gasp leveller, but still Alty were not finished. Seconds later, James Poole met a left-wing corner with a header that smacked against the inside of the post.

It could easily have hit Hall and gone in or fallen for an Alty player to force home, but, instead, it was scrambled clear, and full-time Kidderminster, one of the Vanarama National League North’s biggest wage payers and among the favourites for promotion, were finally able to breathe a sigh of relief.

If the game ended with Alty in control and calling the shots, it didn’t exactly start that way. Caught cold by a Kidderminster side who were on the front foot from the kick-off, Alty found themselves trailing inside the opening minute, as Elliot Wynne could only parry a Declan Weeks long-range effort and Ed Williams followed up to slot home.

Alty, under Parkinson, are made of stern stuff, though, and refused to be cowed by the home team’s flying start. There was a sign of things to come in only the fourth minute, when Tom Peers, leading the line due to an eye condition causing a problem for Jordan Hulme in bright sunlight, set up John Johnston for a volley that flew narrowly wide.

Midway through the half, mounting Alty pressure brought its reward after a lightning burst down the right by Owen Dale, who cleverly turned his marker before leaving him trailing with an eye-catching turn of pace. The resulting low cross was perfect for Johnston, who steadied himself before meeting it with a deliberately-placed first-time finish into the bottom corner of the net.

For all Alty’s attacking endeavours, it was always clear care would be needed at the back, given the threat posed by Kidderminster’s twin strike force of Dan Bradley, who looked well worth the eye-watering wage he reputedly commands, and Ashley Chambers.

Bradley, in particular, looked a handful, and when Ryan Johnson found him with a pinpoint pass in the 35th minute, there was an air of inevitability about the outcome, as the highly-rated frontrunner fired a shot across Wynne and into the far corner.

Johnston wasted a glorious chance to equalise, blazing over after a low cut-back from the right found him in front of goal, and it looked like proving costly when Kidderminster extended their lead a minute from half-time.

Concerningly for Alty boss Parkinson, both Williams and Chambers were in space inside the Alty area, with a nearby loose ball beckoning either to despatch it past Wynne. In the event, Williams took it on himself to roll it into the path of Chambers, who completed a routine finish.

At 3-1 down, Alty had it all to do in the second half, but it was a challenge they met with relish. Max Harrop tested Hall with a fiercely-struck shot that swerved and almost caught out the Kidderminster keeper, and the arrears were down to a single goal soon after.

Again, it was Harrop’s left foot that did the damage, and if there was an element of luck about the way his free-kick deflected off the wall to wrong-foot Hall and nestle in the net, it was no more than the resilient Robins deserved.

Redoubling their efforts to turn possession into at least one point, they went close through Sean Williams, who shot wide from a Hancock pass, and centre-back James Jones, whose angled drive cleared the bar by no more than a few centimetres after a free-kick deflected into his path.

Kidderminster manager Neil MacFarlane’s animated touchline antics betrayed the growing tension in the home camp, and it ought to have been heightened after Hancock was upended inside the area. Johnston slightly overran the ball, after cutting into the area from the right, and as Hancock took over possession, he had his feet taken from under him.

It looked a clear-cut penalty, but referee James Bell was having none of it, despite heated and prolonged protests from several incensed Alty players.

Still Alty went for it, but Hancock’s shot against the keeper’s legs and Poole’s header against the post confirmed it was not their day, much to the frustration of 100-plus travelling fans who roared their support throughout and gave the players an ovation in a heartfelt show of appreciation at the end.