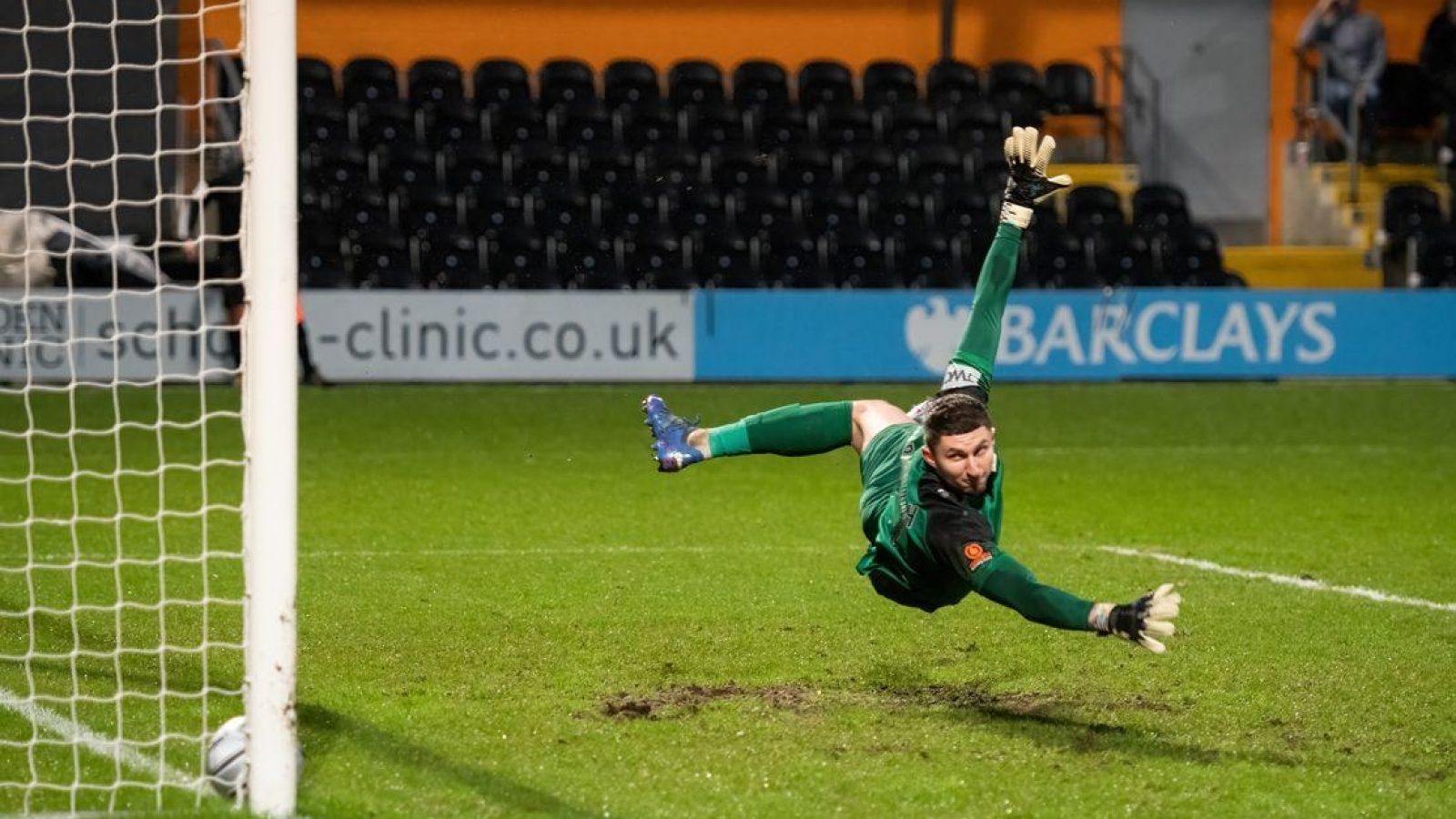 *It's there .. the keeper is at full stretch, but there's nothing he can do about Ben Pringle's brilliant strike. Picture by Michael Ripley.

Altrincham suffered late heartbreak at the Hive Stadium as Mitch Brundle’s last-gasp strike denied them a long-awaited win on a wet day in North London.

Phil Parkinson’s side came close in the 35th minute when debutant Elliot Osborne picked out Dan Mooney with a terrific pass, but the winger’s effort was brilliantly saved by Aston Oxborough.

Experienced midfielder Ben Pringle edged the Robins ahead in spectacular fashion midway through the second period, bending the ball beyond the reach of Barnet’s loanee keeper from outside the penalty area.

The visitors had a great chance to double their lead late in the game through Tom Hannigan, who could only fire into the side netting.

And they were made to pay with less than 30 seconds to play when the ball fortuitously fell to the feet of Brundle, who hammed home beyond Tony Thompson.

A much-changed Alty side took to the field on Saturday, with Osbourne, Jamie Morgan and Jordan Hulme all starting after joining the club during the week.

Coupled with the inclusion of Andy White, following a short loan with FC United of Manchester and a lengthy spell on the sidelines, it was always going to be interesting to see whether there was any rust or unfamiliarity.

Despite being on a tricky run of form, the men in yellow started brightly, with Hulme testing the gloves of Oxborough, before Mooney saw his goalbound effort blocked by a desperate defensive lunge in the 12th minute.

However, our hosts are a different animal to the side that struggled at the start of the season, keeping the Alty defence on its toes from the start.

With the first half progressing, and the weather threatening to spoil what was an entertaining game, the Robins continued to pile on the pressure, with Toby Mullarkey forcing an amber shirt into a heroic lunge to prevent the defender’s shot from hitting its target.

Joining the Robins from Stevenage days before the game, Osborne was really beginning to show his quality and range of passing.

It was his ball to Mooney in the 37th minute that almost edged Alty ahead, but after Dan cut inside his marker, he was frustrated to see Oxborough pull off a terrific save to keep things level heading into the break.

The men in yellow didn’t take their foot off the gas as the second half got underway as Josh Hancock looked to stretch his lead atop the Alty goalscorers' list.

Taking advantage of a terrific run and cross from Matty Kosylo, the midfielder took a touch before arching his shot a matter of inches over the Barnet crossbar.

But the more Parkinson’s team pushed forward, the braver Barnet got on the counter, with a brilliant reaction save from Thompson preventing the London-based side from converting one of many corners they had been awarded.

The first blotch on the day for Altrincham came just before the hour mark when Kosylo pulled up hurt with a leg injury. Forced to make his second change of the day, Parky brought Pringle into the fold, and, only four minutes later, that decision proved to be a masterstroke.

Collecting Thompson’s long ball forward, Hulme did brilliantly to take control, bringing the ball down before bullying his way forward. Spotting Pringle lying in wait, the forward played him into space with a perfectly-weighted pass, leaving the former Rotherham United and Morecambe midfielder to skip over a challenge before bending the ball into the far corner from distance.

Sensing an end to their winless run, the Robins went in search of that crucial second goal, one which would undoubtedly put the game to bed. Hannigan almost did just that with 12 minutes to play, but, from a very tight angle, he could only fire into the side netting.

With time fast running out, Barnet coach Dean Brennan sent his tallest men forward and set about getting his side to play as many balls into the box as possible.

It looked as though Alty had done enough to survive what could only be described as an onslaught. However, with seconds until the final whistle, the wind was firmly knocked out of their sails.

When your luck is in, you must take advantage, and that is exactly what Brundle did. When the ball fortuitously fell to his feet, he didn’t need a second invitation to put his foot through it.

Unfortunately for the Robins, his effort was on target and sailed into the corner of the net from the centre of the penalty area.

Not long after the restart, the referee brought the game to an end, forcing Parkinson to settle for a point when it seemed that all three were within his grasp.