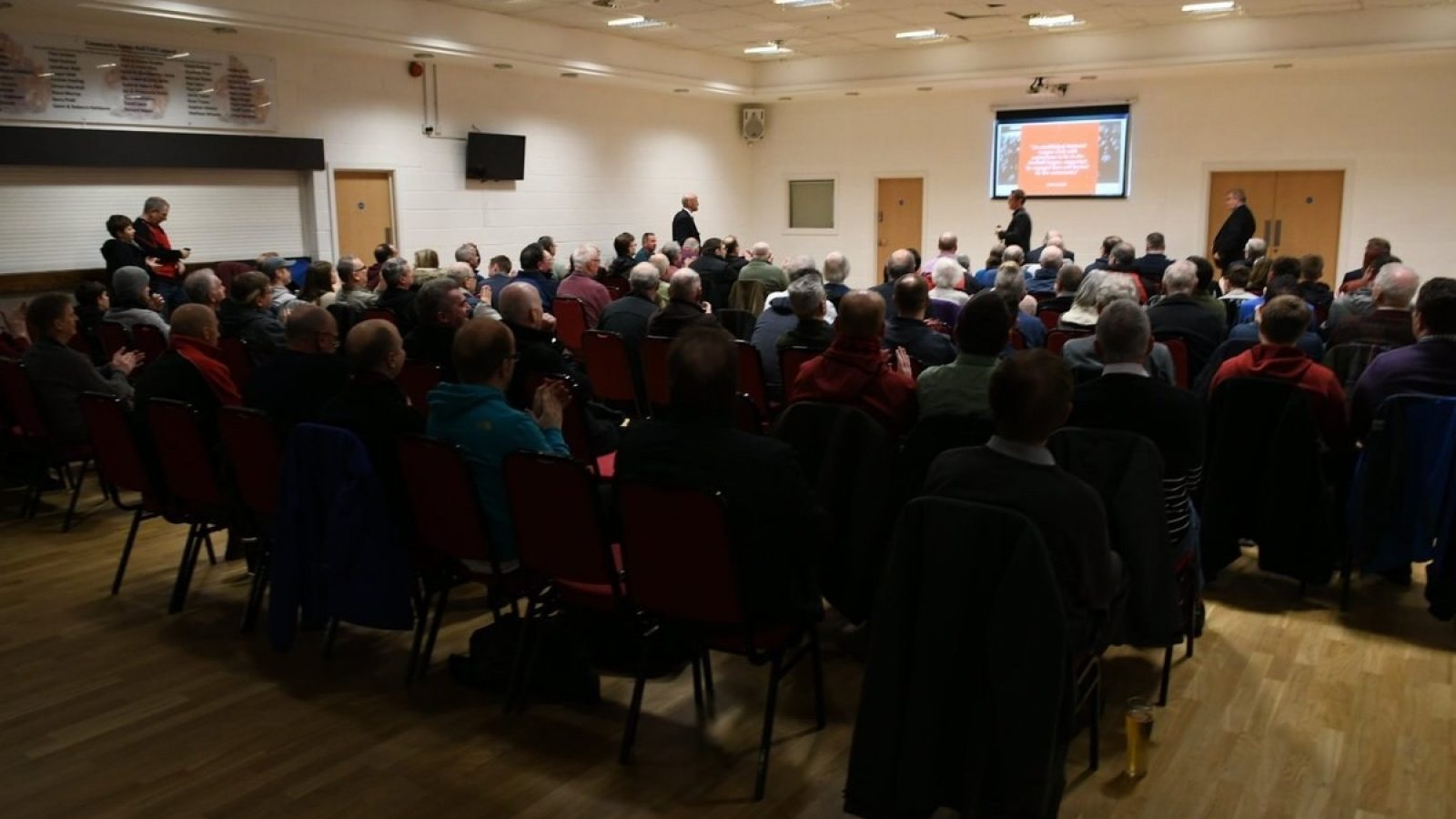 The following is a descriptive recap of the Meet the Manager & Board meeting which took place at Altrincham FC on Friday, January 24th 2020.

The event opened up with a short, well engaged Q&A session with Phil Parkinson.

As was to be expected given the transfer news that broke just hours earlier that day, the conversation began with Parkinson openly addressing the deal that saw John Johnston move to Chester FC for a substantial fee, with Craig Mahon joining the club as part of the negotiations.

Both Phil and the Board were clear that the funds from this deal would be used to, hopefully, strengthen further transfer activity of our own.

The next topic for discussion was youth football at the Club, and in particular, the player pathway through from our wealth of Junior sides right up to the Senior Men’s and Ladies teams.

It was fitting that this should be discussed briefly here, as big news was to follow later in the evening.

PP on developing young players through from the U18 side.

"I spend a lot of time that you guys won't see - trying to find them the right parent clubs to get them back to us, better."

"There's such a big gap from Youth to NLN. It's very, very difficult to make that step up." pic.twitter.com/RkWkEd0yyE

Next to take the floor were Club Directors, Lawrence Looney (Commercial) and Bill Waterson (Communications.) After providing the audience with a full and frank review on the Club’s recent achievements, particularly with regards to building an investible brand for the Club through initiatives such as our community work, the Footy Accumulators documentary and the launch of Alty Rewards.

They then moved on to discuss Altrincham FC’s primary ambition: full time football.

"Yes, we want to bring revenue in - but we want to try and do it through partnerships."

"Take @wearelibero, for example, who have brought something completely different to us." pic.twitter.com/toElWLjGLI

Touching on sentiments already expressed by Phil Parkinson, it was then announced that the Club will move to launch a resourceful full time Educational Academy, paving a clear pathway for young Robins to follow.

Concerning a full time Senior team, it is strongly believed that this can generate the talent to support, and hopefully improve the squad over time. We will be releasing more information on this nearer the confirmed launch date.

The microphone was then handed to our latest addition to the Board of Directors, John Coyne (Commercial), who gave the audience an overview of his background and, more generally, what he has been up to since arriving at Altrincham.

John is a Director of Manchester based Retail and ECommerce Software agency Venditan and joins us having served on the board as a Director of Swinton Lions RLFC in the BetFred Championship for the past two years. John also had a career in professional football, in the late 1990’s, including three seasons at Wigan Athletic.

John’s immediate focus on the Altrincham FC board has been to drive commercial growth, and to help us bring new investment into the club.  His experience of sport management, his commercial nous and his widespread network are all valuable assets for the club.

Following a short interval, Gavin Watts of Define Architects gave fans their first ever look into their architectural vision for the J. Davidson Stadium.

The aim, he explained, will be to vastly “improve the match day experience” whilst “retaining the existing elements.” Whilst ambitious, the plans were heralded as achievable if laid out over a long period of time - therefore, the plans have been duly named ‘Moss Lane 2030.’

We will be working with Define to upload media and more information from the event so that fans who did not attend can view in full. Keep an eye on the website for this in the coming days.

"We want it to become a place where the players are proud to call it home, and a place that is open to the public 365 days a year."

"The vision is ambitious - but it is achievable and it is viable over a long period." pic.twitter.com/sVuIxpTRB5

Lawrence Looney, Bill Waterson and John Coyne were then joined by Phil Parkinson for a sign-off additional Q&A session, which resulted in two key takeaways:

“An established National League Club with aspirations to be in the Football League, supported by engaged fans and backed by the community.”

That was the reaffirmed vision from the custodians of our Club, and we hope that the sizeable crowd whom attended the Meet the Manager & Board event on Friday left more knowledgeable on the ambitious, yet methodical strides we are making towards this.

For more coverage and key quotes from the event, read this thread of tweets that documents the evening. Thank you for your support and we hope to see you at the next one.