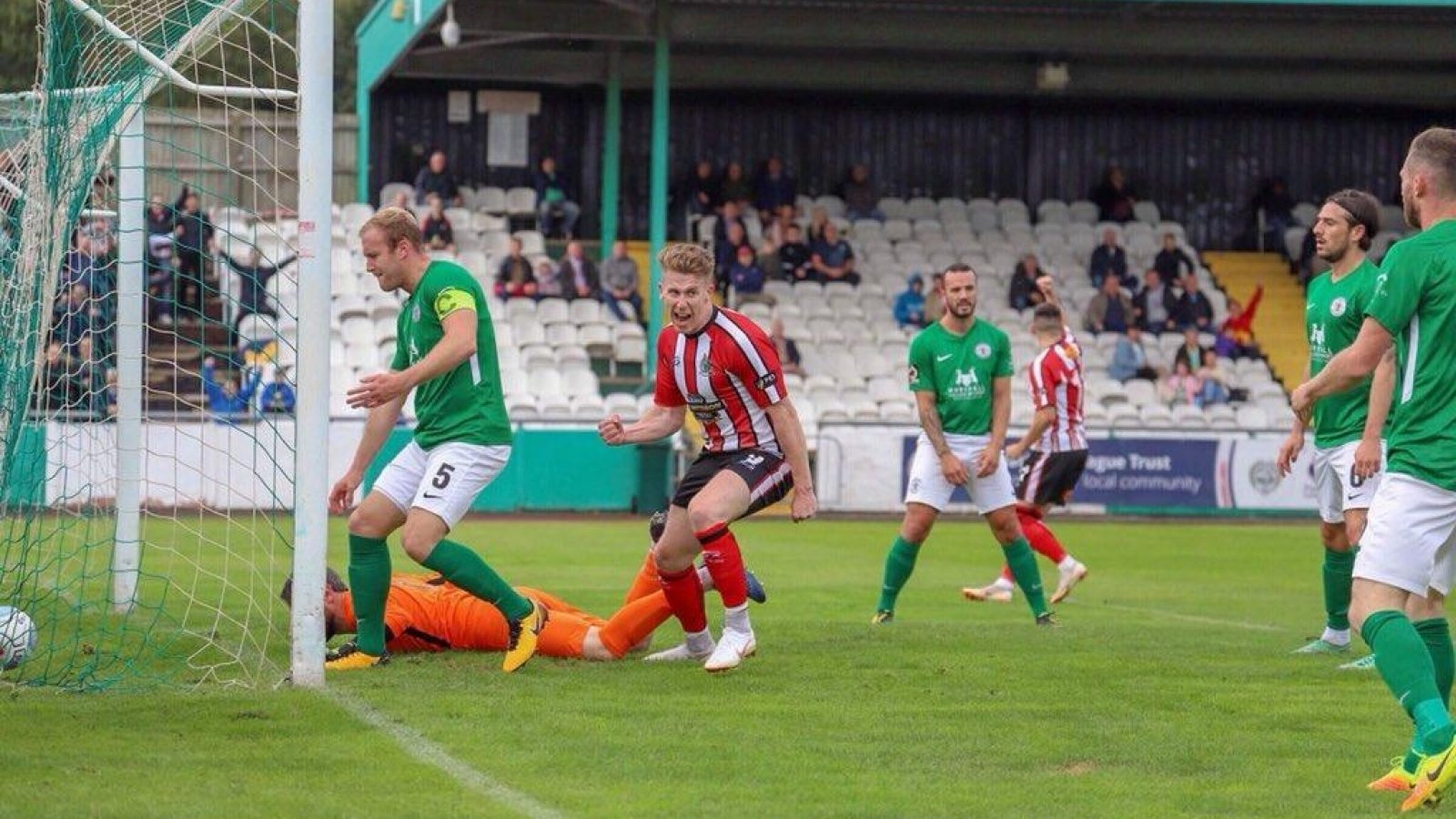 Altrincham enjoyed yet another excellent away day as they made the trip across the M62 and returned with all three points against Bradford (Park Avenue).

The match started in a fast and frenetic fashion which set the tone for what proved to be a highly entertaining match packed with goals. The home side had the first chances with Elliot Wynne making an early double save to deny them from taking an early lead.

It was Alty however who broke the deadlock after just seven minutes. Hannigan played the ball through to Johnston on the left who crossed the ball in as Lowe could not deal with it and combination between the left-back and Tom Peers bundled the ball home to give Alty the lead.

Bradford responded well and put Alty under some pressure immediately as they looked to ex-Alty favourite Nicky Clee for inspiration and he tested Simon Richman in the right-back position.

The first half played out with the home side largely in control of possession and the Robins defending stoutly. Ably supported by Jake Moult in front of the back four, Hannigan and Jones marshalled the defence well but they could not hold out as Bradford’s pressure told.

Their captain Shane Killock gave a warning sign on 32 minutes as Wynne was forced into a fantastic save from close range to make a key stop.

Minutes later however, the home side equalised. It was Nicky Clee’s free kick which created the danger and as the ball spun clear, Killock drilled the volley past Elliot Wynne into the roof of the net giving the Alty keeper no chance.

As the first half played out, Alty showed good character to respond to concede the goal by earning three consecutive corners. Delivery was largely good but they came to nothing as the half-time whistle went. On the balance of play, the hosts were the better side in the opening period with Elliot Wynne making several saves to keep the hosts at bay.

It did not take long in the second half for the hosts to go ahead. Seven minutes into the half, Conor Branson fired past the helpless Wynne after he latched on to a nice cross from Jake Beesley.

Alty bounced back just minutes later to find an equaliser. John Johnston’s effort on goal took a deflection from Killock and that gave Drench no chance as Alty earned a somewhat fortuitous equaliser within minutes of going behind.

Two minutes later, Phil Parkinson made a change to bring Harrop on for Owen Dale and it proved inspired. Johnston played the ball to the substitute who produced a trademark finished into the corner to put Alty ahead just after the hour mark.

With half an hour left on the clock, the game played out similar to the first with the hosts enjoying greater possession and pushing hard. Elliot Wynne was forced into a couple more key interventions and he was enjoying an excellent performance despite conceding two which he could do little about.

Several stoppages in play helped disrupt BPA's play as Alty looked to cling on to the points. The home side looked a threat from set pieces and had a couple of late opportunities but Killock headed over the bar from what was their best chance of another equaliser in the dying minutes. Wynne also made several key catches from set pieces which helped ease the pressure.

After four minutes of added time, the referee blew the whistle as Alty held on. The home side’s lofty league position was evident in some of their excellent play at times but credit to Alty for never letting their heads drop and showing great character to take all three points. After being on the receiving end of some fantastic goals and decisions going against us in recent weeks, it was finally our turn to receive some good fortune. Taking nothing away from the team however, they showed fantastic grit and character to keep battling at each stage of this match.

Next week the lads return to The J.Davidson Stadium but the league is on the backburner as we host Whitley Bay in the FA Cup second qualifying round.