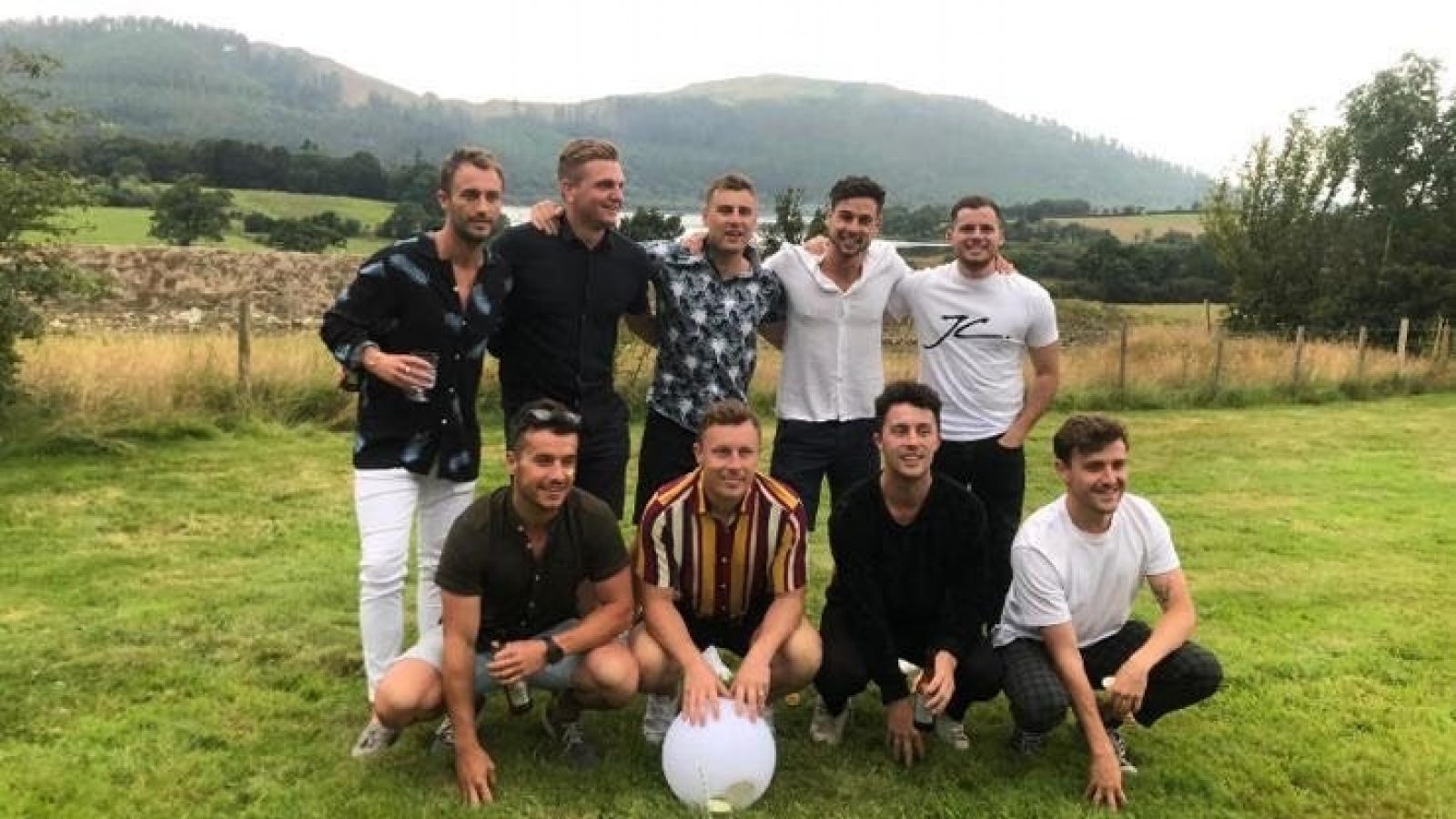 *Marathon men .. Will Hutton (far left, back row), his brothers Charlie and Louis (in the centre, front row) and Jack Warburton (on the right, front row) pictured on one of their many social gatherings with Jordan Sinnott (far right, back row)

Jordan Sinnott’s life was cruelly cut short just over 15 months ago, but four close friends of his are ensuring his legacy lives on as a beacon of hope for underprivileged youngsters needing help to fulfil their potential in a sporting environment.

Brothers Charlie, Will and Louis Hutton and their friend Jack Warburton have followed the fortunes of The Jordan Sinnott Foundation since its inception early last year and have devised a method of supporting it that promises to test their powers of endurance to the limit.

From Monday to Saturday next week, the four former footballers will run all 13.1 miles of a half-marathon on a daily basis, ending each lung-busting leg at the home of one of Jordan’s former clubs.

They are starting out at Matlock, the club he played for at the time of his death, and finishing up at Huddersfield, where his career started, calling in at The J.Davidson Stadium in between on Thursday afternoon.

And if fatigue ever threatens to take hold, all four are adamant a reminder of the Foundation’s mission ‘to provide funding and support to young people to enrich their lives through sport’ will be enough to send it packing.

They have launched a Just Giving page for donations that has already topped £4,500, with a contribution on its way from Alty's board and every penny going directly to the Foundation. The page can be found by clicking on the link below.
https://www.justgiving.com/crowdfunding/6inforsin

Charlie, Louis and Jack joined Alty press and media officer John Edwards on a zoom call to discuss their plans and remember former Alty midfielder Jordan (Will was out jogging, putting the rest to shame!). Here's how the conversation unfolded.

All four of you were close to Jordan - how did that come about?

Louis: My brothers and I grew up with him in Shipley, and I went to the same primary school as he did. We played together through the same youth age groups and always kept in touch. When I signed for Brentford, I met Jack and became good pals with him, and we all just merged into one group of really good friends.

Jack: Yeah, that’s how I got to know Jordan, through Louis being a team-mate at Brentford. We used to spend a lot of time together, and it was like one big family. I’ve always lived down in the London area, but football was always the link.

Louis, you and your brothers all started out at Leeds United, Jack played for Brentford and Jordan had a few clubs. Football can take you all over the place, but you all kept in close contact, didn’t you?

Louis: Absolutely. We all moved around as we got older, but that friendship remained. We would meet up regularly, every five or six weeks, whether it be for a round of golf or whatever. I’d say the golf became the main thing between us in the last few years we had Jordan with us, either at 'home' in Yorkshire, up in Scotland or down south. We loved that.

What are your memories of Jordan as a footballer?

Charlie: Technically, very good. Real ability on the ball, and I’d say he had just about the best shot of any player I’ve seen. His long-range passing was excellent, as well. Maybe he just lacked a bit of physical presence, but with the ball at his feet, he was excellent. Honestly, the highlight reel they showed at his funeral was like watching Steven Gerrard on YouTube. Some of his goals for Halifax, and probably Alty as well, were unbelievable. Such a clean striker of the ball.

He was a sociable lad as well, wasn’t he?

Jack: Yeah, he was. I got to know him later than the others, but he was the sort of lad who wouldn’t wait for you to go and speak to him, he would come over and start talking to you. He would basically speak to everyone in the room. You couldn’t help but take to him. There was that infectious smile and laugh as well. He loved the banter within the group and always gave as good as he got. He was just a good lad and a good laugh to be around. No-one had a bad word for him.

Charlie: He was a great lad to be around. Like Jack said, he could dish it out and take it when it came to banter. He would wind you up and have a go and then just have a massive laugh. Jord and Will were like a comedy sketch together, just taking the mickey out of each other constantly. I'm not sure I ever saw them have a conversation that didn't end in them both laughing their heads off! He was just one of those people you come across in life who make an impact on everyone they meet. I know that’s often said about someone after they’ve gone, but honestly that was Jordan.

Louis: He always knew what each person in the group was doing. It wouldn’t just be how are you when we met up, it would be how’s uni or how’s the placement going? He always had his finger on the pulse when it came to what we’d all been up to. That was nice, because it showed he was genuinely interested in his mates.

It goes without saying news of his death was devastating. Alty were at home that day, and we announced it at the end of the game - can you all remember where you were?

Charlie: I was on a train, and Louis rang me. My first thought was he knew I was on a train, so it had to be something important. It was just complete and utter shock. Jord had been on our WhatsApp group at half 10 the night before with a bit of banter. So we knew he was out and about, but nothing prepared us for what happened. I was fully expecting him to text at 5pm about the Matlock game and other results..

Jack: Louis called me as well. I just thought this can’t be true, it’s not real. Just total shock.

Charlie: I was at the Southampton v Tottenham FA Cup tie that afternoon, but I couldn’t tell you a single thing that happened in the game. Nothing registered, you’re just in a total daze.

Did you all manage to get to the funeral? If so, what about the 862 football shirts on display?

Louis: There was a bit of a time lag between Jordan’s death and the funeral, so by the time it came round, everyone had thrown themselves into rallying round each other and the shirt initiative had really taken off. That created a bit of a distraction, which was no bad thing, because you’re just waiting for the day, knowing it’s going to be so sad.

This fund-raising initiative next week shows he’s still very much in your thoughts, doesn’t it?

Jack: Well, we often talk about how he would react if he could see what we’ve planned. He’d probably have a good laugh and say ‘what on earth are you all doing, by the way?’

Charlie: It has been difficult during Covid. Jord's family and close mates have done an amazing job with the Foundation. It took off with the shirts and then became a charity. We decided at the start of the year we would really like to do something for it, and we just thought that including the clubs he played for would be ideal.

Louis: Initially, we thought about cycling from one golf venue we used to play at to another, but Chas and Jack both said ‘nah, we hate cycling!’ So we settled on doing a run, though I have to say that anyone thinking, having all played footie, we should be quite fit has got it wrong! We’ve had to put a fair bit of work in.

So what’s the timetable exactly, and how do you think you’ll fare?

Charlie: We all live in London these days, so we’ll be travelling up ready to make a start from Matlock at 10 o’clock Monday morning, finishing at Chesterfield. Tuesday, we’re planning an 11am start from Chesterfield to Alfreton, and we’ll then be driving over the Snake Pass, ready to go from Old Trafford to Bury on Wednesday at Noon. Thursday is when we will be at Alty, setting off from The Etihad at 1pm and hopefully stepping on to the pitch sometime in the afternoon. Friday we will be running round Halifax from 1pm starting and finishing at The Shay Stadium and for the last one of the six, on Saturday, we will be running round Huddersfield and hopefully finishing at midday at Huddersfield Town FC. It’s going to be hard, running 21.1km (13.1 miles) every day, but we are doing it for a great reason, and that will drive us on.

Louis: Every time we speak to Kelly (Jordan’s fiance) or Mel (his mum) or anyone connected to the Foundation, it gives us a boost. We chatted with Kelly recently to finalise a few details, and it gave me a new lease of life, to be fair. All the routes we are running are posted on our Just Giving page if anyone wants to check them out.

Charlie: Kelly found out she was pregnant just a few days after the funeral. That was the most bitter-sweet amazing thing ever. Little Maisie is nine months old now - what an amazing thing for Kelly and Jordan’s family. There will be no shortage of inspiration for us. We’ll be wearing some of Jordan’s old shirts from the clubs he played for, and we’re hoping people will join us on the various routes and run alongside us for a bit. Kelly has seen the Just Giving page and was overwhelmed at the number of people who have donated from so many places, abroad as well as this country. We have exceeded £4,500 already, so every penny now will be a bonus. There is no target, as such, just a wish to raise as much as we possibly can, because we know it’s a cause Jordan would be proud to support.

Once again, the link to the Just Giving page is here for anyone who wants to contribute: