Prices rising, everything going up, is there no end to it? There is when you buy an early bird season ticket! 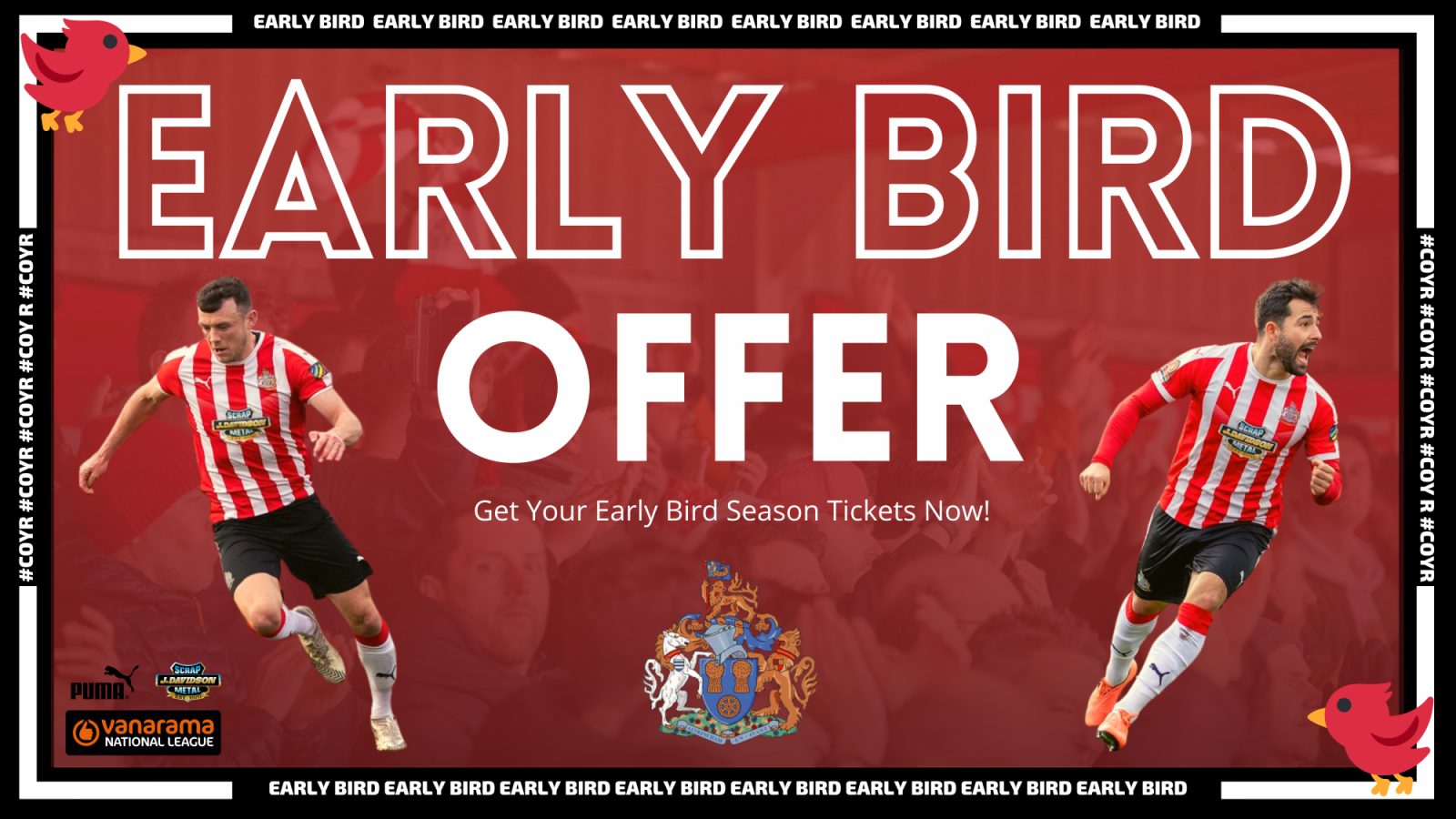 Prices seem to be soaring everywhere you look these days - with one notable exception.

If you are an Altrincham season ticket holder, looking to renew for 2022/23, or you're thinking of becoming one, the club have come up with an offer that fairly leaps off the page in these costlier-than-ever times.

Simply commit to purchasing a ticket for next season by the middle of next month, and it will cost exactly the same as the current one did.

That's right, snap up the club's fantastic early bird offer, and the amount you pay for being guaranteed a place at each and every Vanarama National League fixture next season will remain unchanged.

Actually, that's not quite true. To be strictly accurate, you will actually be paying LESS, in real terms!

Because the gap caused by Macclesfield Town's demise will have been filled by the start of the new campaign, there will be one extra National League home fixture in 2022/23, meaning anyone on the early bird deal will be getting their football cheaper, pro rata, than this season.

So, buy your new season ticket before the deadline, and your outlay will be the same as before at £289, but you will, in effect, be getting an extra game thrown in for free!

It's an exceptional offer that bucks the current inflationary trend and it will remain open to all Alty fans until the end of the final game of the season, against Yeovil Town at The J.Davidson Stadium on Sunday, May 15th.

Tickets at these unbeatable early bird rates are available now, either by clicking on the code at the bottom of the page or, if you would rather not use the online option, messaging co-chairman Bill Waterson at [email protected] and he will deal with your request and any questions about method of payment.

Even if you don't commit before May 15th, and therefore miss the early bird bargain, a season ticket for 2022/23 will still offer unrivalled value for money, whenever you buy it, with the slight increase in overall price working out at the same amount per game, given the additional fixture.

Don't forget, as well, that free admission to pre-season friendlies are included with a season ticket, and when the programme of warm-up games is announced, you will see that represents another bonus, considering the absence of home friendlies last year.

The club are encouraging more people to join the growing number of season ticket holders because it is not only beneficial for forward planning but helps facilitate the early implementation of decisions that are both responsible and key to the team's ongoing success.

It is also a reward for loyalty, and all our supporters are bracketed in that category, which is why inevitable increases in game-by-game admission charges, to help offset rising running costs, have been kept to a minimum.

From the start of next season, payment on a game-by-game basis will be £19 for adults, £15 concessions, £7 juniors and £2 children. This represents an increase of £2 for adults and £1 for concessions and juniors, with the rate for children staying the same.

You have turned out and got behind the team in almost unprecedented numbers this season, and the club are fully aware that support on that scale is crucial to continued success on the pitch.

Two of the board's main priorities are making entry to The J,Davidson Stadium as affordable as possible for everyone and giving Phil and Neil the financial backing they need to compete in the National League, and they have endeavoured to strike the right balance with the range of season ticket and admission prices implemented for next season.