So far so good for Sorvel as Branson strikes again 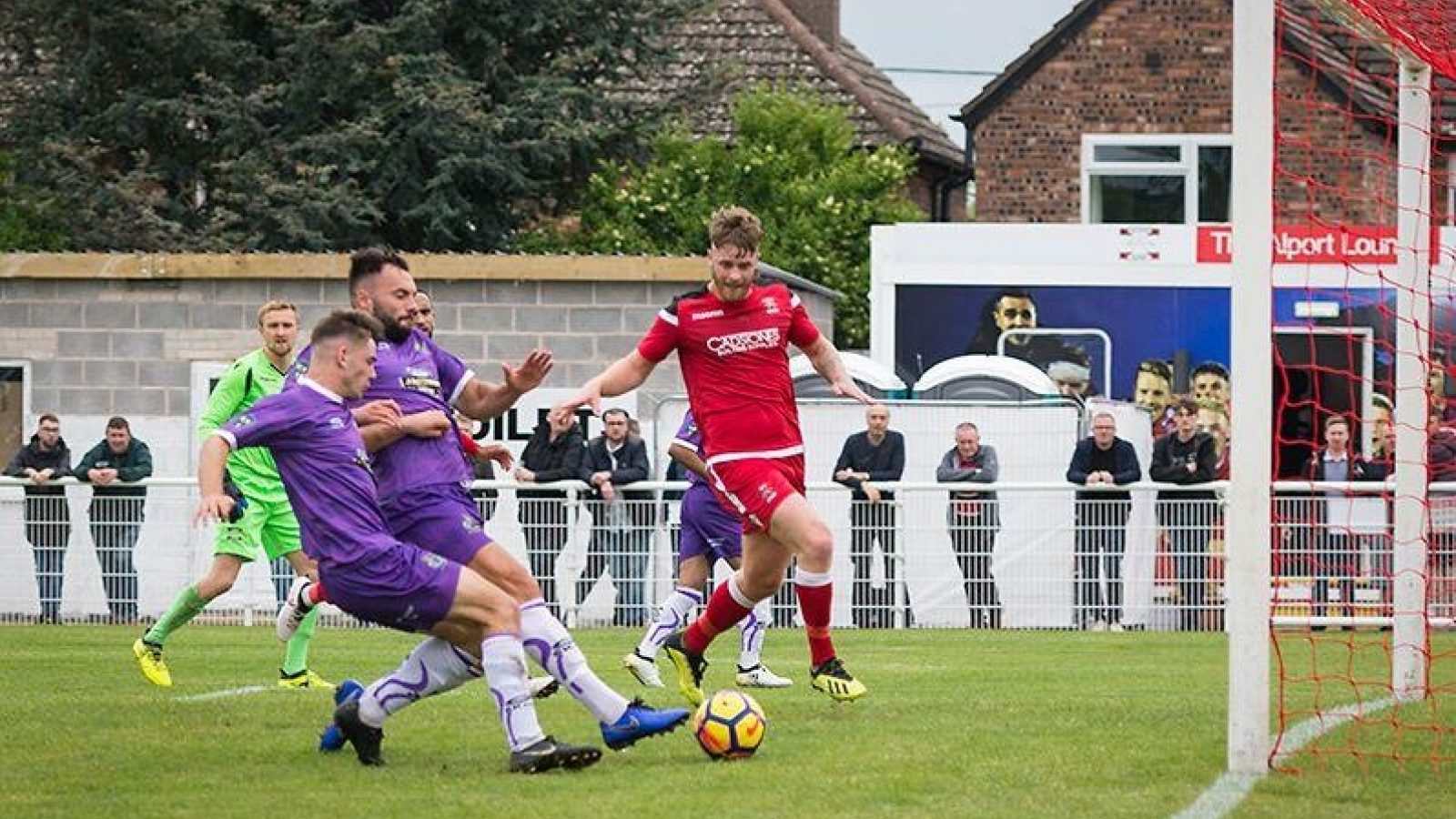 *Full stretch - Conor Branson gets the final touch to a cross-shot from Nathan Arnold to put Alty ahead. Picture: Michael Ripley.

Conor Branson scored his second goal in as many Altrincham appearances as the Robins launched their pre-season preparations in earnest with a hard-fought 1-0 win over Whitchurch Alport at Yockings Park on Saturday.

The recent signing from Bradford (Park Avenue) powered forward midway through the first half and slipped a pass through to Nathan Arnold on the left of the area. Sensing Arnold was being forced wide, Branson continued his run into the box and was on hand to apply the finishing touch to an angled shot from his team-mate that looked to be drifting narrowly wide.

While the dynamic midfielder's goal a week earlier was one of five scored by Alty against the club's youth team, this one stood alone as the difference between the sides, as a committed Whitchurch outfit gave Neil Sorvel's men a run for their money in what was the opening encounter on the Robins' list of pre-season fixtures.

There were several absentees, including manager Phil Parkinson, but Sorvel was delighted with the contribution of those involved, as Arnold, Josh Hancock and Connor Hampson frequently combined to good effect down the left flank and Branson once more looked a dominant figure in central midfield.

'It was a good work-out,' said Alty's assistant-manager. 'I was happy to get through it without any injuries, and it was also an opportunity to have a look at a few of the lads (triallists) who have been coming in and training with us. We will give them until after next Saturday's game with Crewe before making any decisions.

'They have done well enough to still be here, after training with us for two weeks, but we need to see them against probably stiffer opposition, which will certainly be the case when we take on Crewe.

'Looking at the lads we've signed, Nathan and Conor both showed up well today. Nathan didn't play much last season, but he has experience and quality and a knowledge of the game from the level he has played at that should benefit us.

'Conor is a tidy footballer who has that element of being a goalscorer that was so apparent last season, when he scored 12 from midfield for Bradford. He is big and powerful and will bring us something extra defensively and offensively at set-pieces.

'It all adds to competition for places. Let's be honest, it's going to be fierce among the midfield lads, with Jake Moult, Simon Richman, Sean Williams, Conor and Max Harrop, as well as Josh a bit further forward.

'That's tough competition for places, which is exactly what we want. We look strong across the back as well, with four lads (Tom Hannigan, James Jones, Ben Harrison and Toby Mullarkey) vying for places. They will all get minutes to put their case forward for inclusion. It's the same at full-back. When Andy White is fit, he'll be competing with Shaun Densmore and Connor Hampson - all top-class players, but only two spots available.

'John Johnston, Jordan Hulme and Max Harrop will provide an element of creativity up top when they're available again shortly, so there is competition everywhere. It is looking promising, with the squad that has been put together.

'There were moments of quality from Josh, particularly receiving the ball in tight areas and having the awareness to deal with that and turn into space. It is unfortunate we will miss him for the first three games, due to suspension, but that presents an opportunity for someone else. As things stand, you would think that would be Max Harrop.

'When you think of players like Max and Josh, you realise the adaptability within the squad, and that is going to be important. It's a tough league that throws up different games and themes and formations that leave you needing to make a subtle change here or there, and it's good to have the personnel to do that.

'The injured players aren't far off. Whitey did a bit of running in training on Thursday night, and he was able to come out and do the warm-up before kick-off here this afternoon. It's a fall-out from last season, when he got injured at Nuneaton. He's still not recovered from that.

'Max has a little niggle from training, and Jordan was missing today for personal reasons. But, overall, it's looking good, and they should all be ok for next Saturday, with the exception of Whitey.'

Matt Chadwick created problems for the Whitchurch defence as a second-half substitute, and Sorvel added: 'He couldn't quite get himself fit enough towards the end of last season, but, to his credit, he has come back in fantastic condition.

'He's a player Phil and I have always liked, and he has been a thorn in our side whenever we have come up against him, whether it be with Alty or Nantwich. He has always done well against us, and you could see glimpses today of what he can do. We'll see how that goes.

'Steven Drench wasn't involved in the game, but he was out there doing bits before kick-off, and he has had the operation on his knee, so hopefully in the next couple of weeks, he will be able to take part as well.'